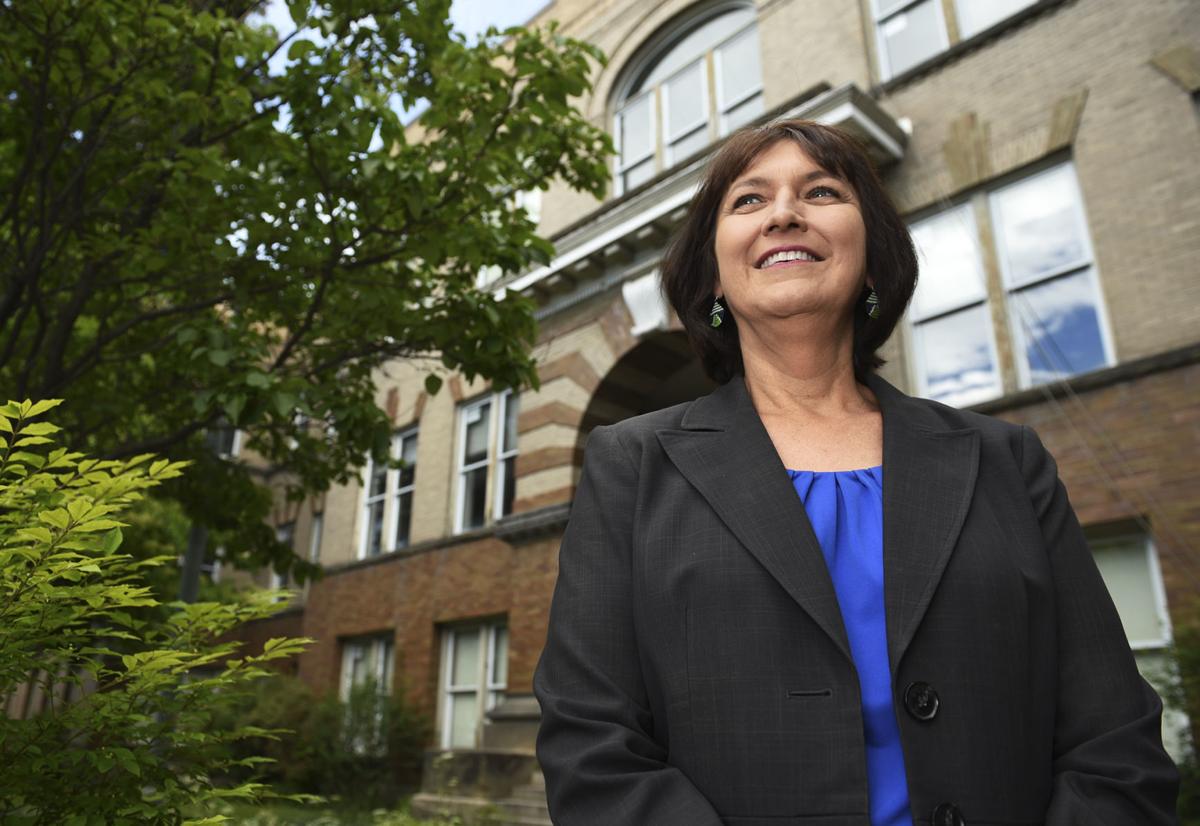 Denise Juneau stands in front of Hellgate High School on Sunday afternoon in Missoula. Juneau will be starting her new post as the superintendent of Seattle schools on July 1. 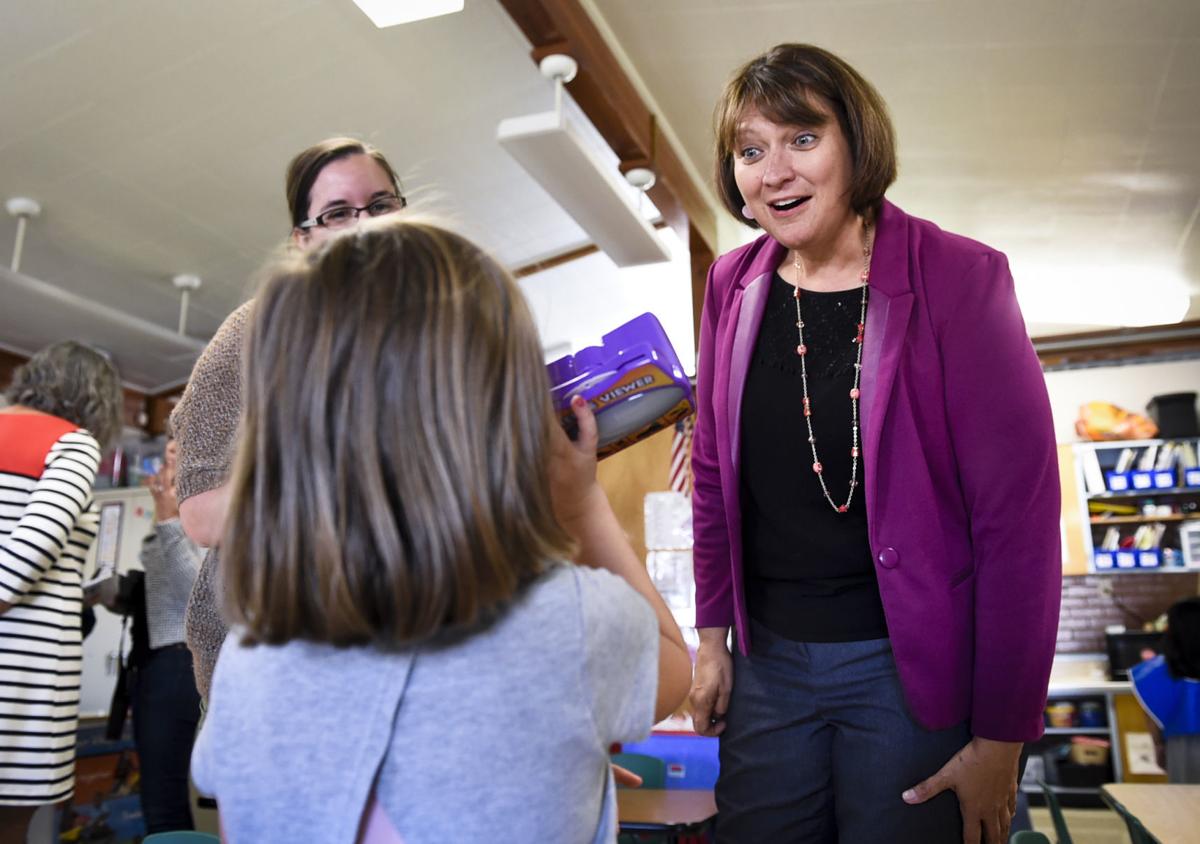 After spending eight years working to improve education for Montana kids and a bid to be the first American Indian woman to serve in Congress, Denise Juneau is leaving the state that she loves.

“Montana’s land and people get into your bones and soul,” she said.

Juneau, an enrolled member of the Mandan Hidatsa Tribes, will take over as superintendent of Seattle Public Schools on July 1. Juneau was just getting her consulting business off the ground when she saw the job opening in Seattle and decided to throw her hat in the ring. Now she hopes to bring her experience in boosting academic achievement and working within individual communities to find solutions in a large district facing significant achievement gaps and budget shortfalls.

The media and other groups in Seattle were quick to note Juneau will be the first American Indian woman to hold the job, which is something she has heard often throughout her professional career.

“It’s still amazing that there are all these firsts to be had,” she said. “Seattle understands they are a city that is occupied Native Country. I think it’s exciting for Seattleites to see leaders who are Native. They realize where they come from and the land they sit on.”

In addition to being the first American Indian woman elected to an executive statewide office during her tenure as Montana's superintendent of education, she lost a bid for Congress to Ryan Zinke in 2016. After the campaign, Juneau took a break and moved from Helena to Missoula to decide if she wanted to continue pursuing a career in politics.

“I’m really proud of the campaign we ran. I think it was inspirational to a lot of people,” she said. “But it wasn’t time for me to jump back in.”

But it did give Juneau time to figure out what's next and reflect on the things she's already done.

Juneau started her education at Head Start in Billings and later moved to Browning, where she graduated high school. She pursued a bachelor’s degree in English at Montana State University, a master’s in education from Harvard University and later completed a law degree from the University of Montana.

In her two terms as superintendent of public instruction from 2009 to 2017, she managed a $1 billion budget and oversaw the education of approximately 145,000 students.

“The work we did from the Office of Public Instruction really was steeped in community,” she said. “We not only raised graduation rates to historic highs ... we raised academic rates at the same time.”

Dennis Parman, who worked alongside Juneau as deputy superintendent at OPI for seven years, said Graduation Matters is Juneau’s stand-out piece of work. Juneau took a good idea and made it better, he said. He thinks it was successful because it relied on good data, and while the program was statewide, it was implemented at the local level.

“I told her ‘I never thought you were going to be able to pull this off, because others have tried it,’” he said.

But Juneau took a different approach. She raised funds instead of fighting for state dollars, conducted research and provided local school districts with guidelines but encouraged them to implement the program in their own way. Parman said she found the gatekeepers in local districts, got them on board and always followed up.

“I think the world of Denise,” he said. “She gave so much of herself in terms of her heart and soul on issues that were important.”

Juneau’s other accomplishments include providing the ACT for free to all juniors, supporting a program that encourages and provides assistance to students applying to Montana colleges, and education on applying for financial aid to make sure students take advantage of any available support.

Juneau also created a student advisory board that she says truly informed the work at OPI. Students provided their own ideas and feedback on how policies were practiced. The initiative is something Juneau plans to institute in Seattle.

Another major initiative, School of Promise, had less clear results. The program provided grants from federal dollars to the lowest performing school in the state. All of them were on reservations. Graduation and academic proficiency rates varied and were unable to demonstrate whether the program was successful, but Juneau stands by the program and said there are ways other than numbers to determine if something was working. Juneau said she wishes she had more time to work on Schools of Promise and expand the program.

“I think it did some great work in schools,” she said. “I wish we could have spread that wider into more schools. It was such deep partnership work.”

Juneau said her goals that went unaccomplished happened in the Legislature. She lobbied for legislation to raise the dropout age to 18 and get school funding for students who are 19 and need an extra year to finish high school.

“It’s some of those efforts, I’m not sure how we could have done better, because we really did work on it over time. I just wish those would have passed,” she said.

As a superintendent again, Juneau will be tasked with asking the state to adequately fund education. Juneau said she’s already been through the process of asking for money to educate students, getting turned down and having to continue anyway.

“You can advocate as hard as you can and you can put together facts and data sheets ... but still I don’t get to vote,” she said. “When times are lean, it makes you prioritize.”

While getting turned down can be exhausting, Juneau said there’s always room for optimism.

“People don’t need tons of money to do the right things,” she said. “There are ways to still live up to priorities. It takes work.”

Juneau is looking forward to visiting classrooms again where she can see concepts clicking with kids, talking about their hopes and dreams and helping them realize they are smart.

In her last days in Montana, Juneau is savoring her friends and family and only being minutes away from hiking trails.

“I have no doubt I’ll be back in the future,” she said. “I’m just taking on this role, and I’m going to do the best job I can do over there.”

The Seattle Public School Board finalized the contract for Denise Juneau to be the district’s next superintendent at a meeting on Wednesday night.

It’s always been in Bert Pezzarossi’s mind to run for some sort of elected office.

Graduation Matters Montana's future is unclear, though it's been cut from the Office of Public Instruction's website.

An injured horseback rider was airlifted from the Bob Marshall Wilderness west of Augusta Tuesday.

Donald Trump Jr. to campaign for Matt Rosendale in Billings

Donald Trump Jr. will be the keynote speaker at the Montana Republican Party's Platform Convention VIP Dinner in Billings later this month.

A new superintendent was named Wednesday to Yellowstone National Park, one of the crown jewels of the U.S. park system, after his predecessor said he was being forced out by the Trump administration following a dispute over bison.

New Lincoln community center includes workout machines, a game room, and most of the town

Lincoln's new community center opened this past weekend, bringing a space where both kids and adults can work out and have fun during long win…

After breaking neck in bicycle crash, former Helena College Dean Daniel Bingham is on the road to recovery

Early in the morning of Feb. 14, with the rising sun casting gray light into the streets, Daniel Bingham was riding his bicycle down a path in…

Denise Juneau stands in front of Hellgate High School on Sunday afternoon in Missoula. Juneau will be starting her new post as the superintendent of Seattle schools on July 1.