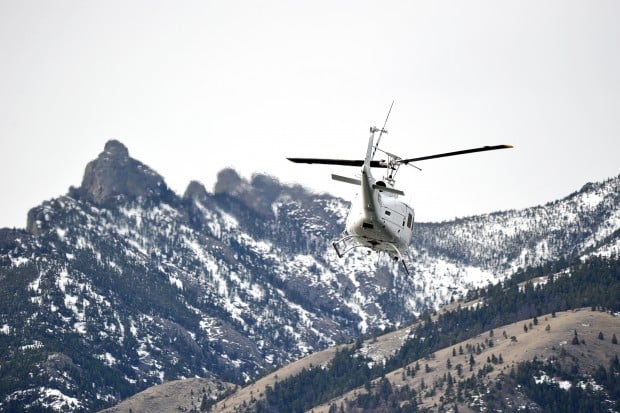 Dylan Brown Independent Record - A DNRC helicopter flies over Holter Lake to pick up firefighters, who were working to fully extinguish a wildfire Friday morning. 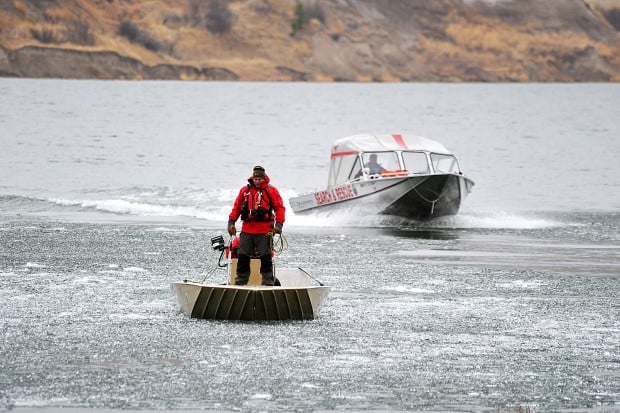 Dylan Brown Independent Record - Firefighters and Search and Rescue crew members break through ice after returning from a fire off of Holter Lake Friday morning.

HOLTER LAKE — Firefighters were taken by helicopter and boats to a blaze on the west shore of Holter Lake Thursday and Friday.

The area, which has 98 homes scattered along the shoreline, doesn’t have any roads leading to it. However, eight volunteers went by boat to the wildfire on Thursday, and additional crews were taken in Friday by helicopters and more boats.

The fire licked around three homes in the area, but none were burned. About 10 acres were blackened by flames in the same area last year when a smoker left on a porch burned down a home.

According to Rocky Infanger, the Wolf Creek/Craig volunteer fire chief, crossing the partially frozen reservoir posed quite a challenge, and crews ended up having to turn the boats around Thursday night and leave eight firefighters stranded at the site overnight.

“It was pretty treacherous conditions,” Infanger said on Friday. “We brought in mutual aid from Helena last and requested search and rescue with their boats. We got eight guys over there, but then had issues with the boats, the ice, the darkness and the wind, so we aborted for safety reasons.

“We had no idea what we were looking at for the fire until morning. But we were able to get a flight on it and got some rain this morning, which really helped out.”

The fire was discovered by a homeowner who had put in a boat at the Gates of the Mountains and floated down the Missouri River to the area on Thursday, Infanger said. The resident didn’t have power to his cabin, so he called NorthWestern Energy and brought a representative to the site.

“Somewhere along the line the fire started,” Infanger said. “Its cause is under investigation, but a power pole is down.”

Infanger said while some people may think it’s too wet at this time of year for wildfires, the 7,000-acre blaze that started from a downed power line and high winds on Tuesday further down the Missouri River north of Great Falls showed otherwise.

“My philosophy is that if we don’t have snow on the ground, it’s fire season,” Infanger said.

The volunteer firefighters worked on protecting the homes, while crews with the Department of Natural Resources and Conservation focused their efforts on the wildfire. Butch Kroll with DNRC said about three-quarters of the fire was in grass, and the rest was in a timbered draw.

“We’re calling it the Indian Trail Fire,” he added. “What I would like to do is have it to the position we can put it on patrol — which is basically have it out — and I think we can do that with this rain and moisture.”

Tri-Lakes Fire Chief Bob Drake noted that conditions in the area were dangerously dry initially, despite the rain that fell in the Helena area overnight.

“We may have a small crew in there (today), but it sounds like everything is good,” he said.

One of the most beautiful souls we will ever have the privilege to know, Kestin David Noel, blessed this world September 16, 1997. From the da…

The City of Helena is currently meeting to discuss the funding of the Helena Police Department.

The Bureau of Land Management is offering a reward of up to $500 for information leading to the identification, arrest and conviction of those…

Dylan Brown Independent Record - A DNRC helicopter flies over Holter Lake to pick up firefighters, who were working to fully extinguish a wildfire Friday morning.

Dylan Brown Independent Record - Firefighters and Search and Rescue crew members break through ice after returning from a fire off of Holter Lake Friday morning.