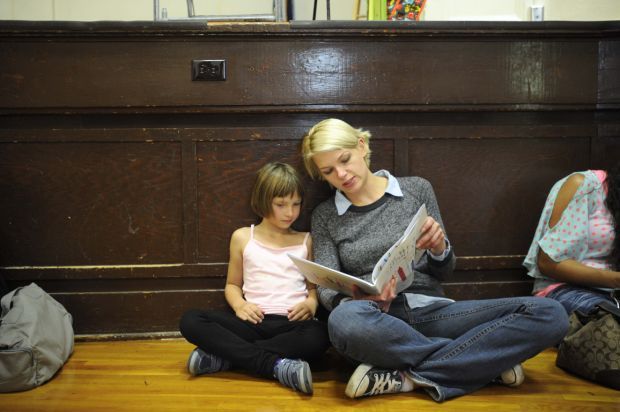 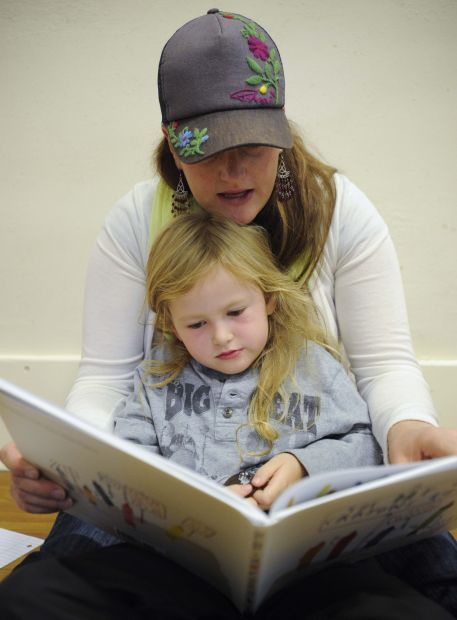 The first of several hundred books to be gifted to first graders around Helena were handed out at Hawthorne Elementary on Thursday afternoon.

The books are part of Fabulous Firsts, a Helena Education Foundation program in its 11th year, that gives each first grader a hardcover book.

“If you are wearing red, please gently and lovingly come up and grab a book,” Hawthorne Principal Deborah Jacobsen said to the cluster of first graders gathered in the school gym.

She called out several other groups until each first grader had one of the seven books selected by a committee that Jacobsen leads.

All the elementary school librarians are also on the committee. Each year they make sure to choose both nonfiction and fiction books. Jacobsen also looks for a book that shows men or women in nontraditional gender roles. This year that is filled by “Rosie Revere, Engineer,” a book about a girl who wants to be an engineer and learns from her great-great aunt the only way she could fail is if she quits.

The committee also has searched for a good book that includes Native Americans but hasn't been able to find one members like for the last two years, Jacobsen said.

Local authors or artists are also a factor. Helena artist Connie Bergum illustrated “Beneath the Sun,” another of this year’s books.

Four of the books are listed on the Treasure State book list, which chooses titles based on excellent content and illustration.

Before making a final decision, Jacobsen tests out the books by reading them to some first graders.

Not all children in the school district may have the chance to own a hardcover book of their own, Jacobsen said. But Fabulous Firsts changes that.

Several fifth graders joined the celebration on Thursday to read to any younger students whose parents could not attend.

Jacobsen asked a few of them if they had kept their Fabulous Firsts book, and all but one immediately rattled off the title.

The Helena Education Foundation also donates a copy of each book to the school libraries. In total this year, it purchased and will distribute around 700 books.

The celebrations will contribute at schools across the district until the last two at Bryant and Rossiter on Sept. 19.

Each school does the distribution a little different, Lisa Cordingley, executive director of the Helena Education Foundation, said.

Jim Darcy distributes during the evening when more parents can attend, Cordingley said. Broadwater Principal Sue Sweeney always reads one aloud before, and most schools gift wrap the books and include a letter about reading from fifth graders.

Though the books at Hawthorne weren’t wrapped they did include a note.

First grader Elaina Edwards received “The Snatchabook,” and carried it back to her dad, Levi, who read the handwritten note tucked inside the back cover from fifth grader Luke Sullivan.

“Learning how to read is the best thing ever,” Sullivan wrote as part of his note.

Levi cracked open the cover and read to his daughter about the little book thief who only takes books because no one is around to read to him. But once the “snatchabook” returns the books he stole, he is welcomed into any home during story time.

During the reading Elaina slowly snacked on her Oreo and milk, eyes fixed on the illustrations the whole time Levi read.

“I like that book,” she announced when it was finished.

Is Elaina going to keep the book forever?

Mouth full of milk, she replies with a simply “mm-hmm” and nods her head yes.

​Alexander Deedy can be reached at 447-4081 or alexander.deedy@helenair.com