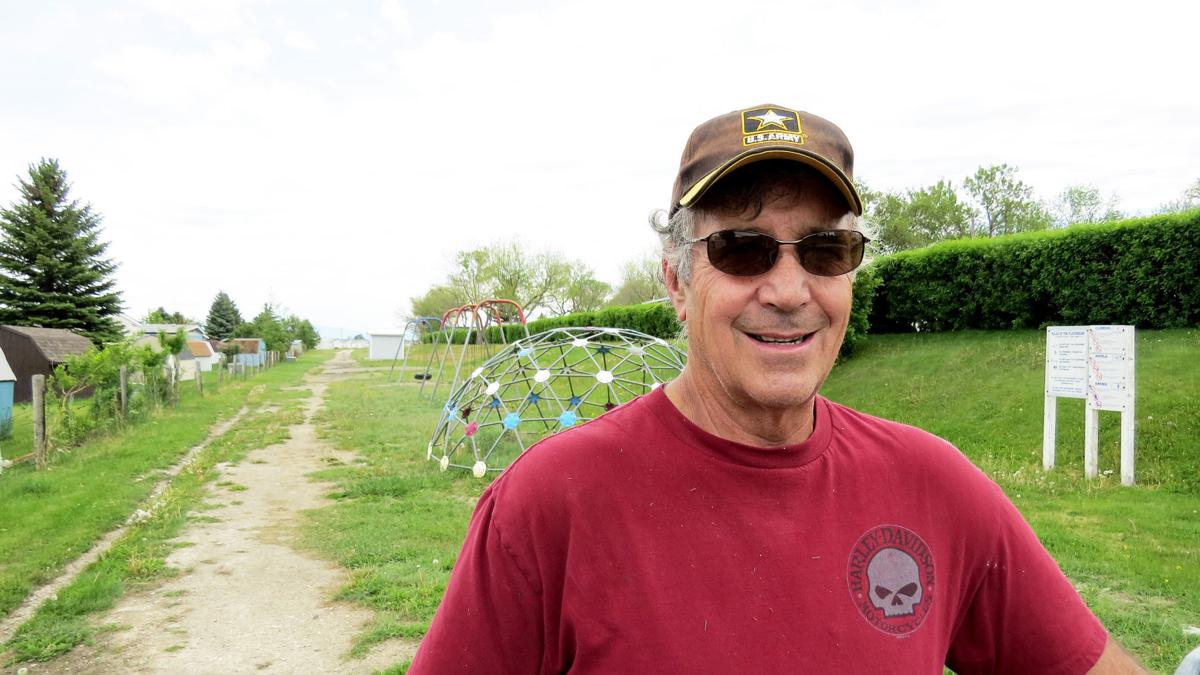 George Glueckert talked about the former railroad bed granted to Lewis and Clark County recently as an easement that will allow the property to be used as part of the City of Helena's Centennial Trail, which will span the city from east to west. The old rail bed is shown extending toward Helena behind Glueckert, who now has a mowing business but used to work for Burlington Northern Railroad when this former spur line was in use. 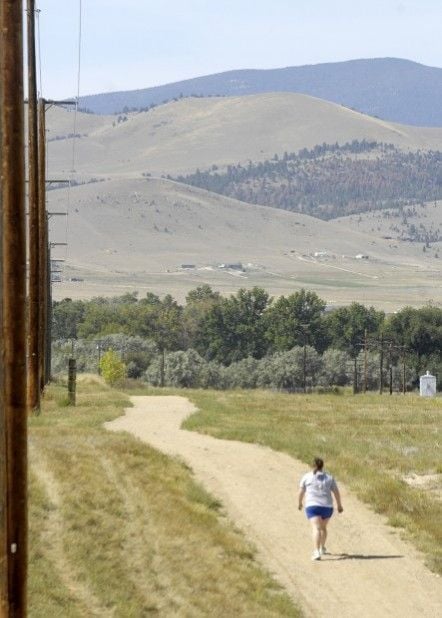 Jill Morse walks on the Centennial Trail near Henderson Street in this IR file photo from 2009.

With help from Lewis and Clark County, the city of Helena met the deadline to apply for federal funds through the state Department of Transportation to further construct a cross-town trail.

The city is seeking about $400,000 in Community Transportation Enhancement Program money for another link to Centennial Trail, although about $40,000 will be used for another project, city engineer Ryan Leland said.

These CTEP funds require a 13.48 percent match by local governments.

This additional project involves constructing extensions to the curbs at the intersection of Helena Avenue and Roberts Street, near Helena Industries, Leland said.

These curb extensions, commonly known as “bulb-outs,” shorten the distance required to cross the street.

Plans to install sidewalks in the area will contribute toward the city’s match needed for the CTEP funds for this project, Leland said.

While the vision for the western portion of Centennial Trail included using Joslyn Street and Leslie Avenue, the easements obtained by the county from a pair of landowners allows the trail to remain on the old railroad track bed, Leland said.

Keeping the trail on the old railroad land was the preferred option, he added.

“It will be a more direct route,” he said. “It is already being used. That’s the preferred path by people.”

George Glueckert, who will be 62 on June 8, is among those who runs the trail as part of a roughly seven-mile route he takes maybe three times a week.

Glueckert used to work for Burlington Northern Railroad as a switchman, and occasionally the train he helped operate would travel this spur line to haul a coal car to its destination at the end of the line.

On Monday, he paused from mowing a lawn as part of his lawn service and handyman business to walk the old railroad line and talk about its past when he was a train switchman.

“This was the line right here,” Glueckert said, noting that he went to work for the railroad when he was 19.

Having the old spur line become part of the city’s nonmotorized network is good, he said.

“I think it would be great to somehow keep this for everybody to run or whatever they want,” Glueckert said.

The city’s plans call for constructing a 10-foot-wide asphalt path that would extend from the existing portion of Centennial Trail, east of Joslyn Street, and go all of the way to the Montana Wild facility at Spring Meadow Lake State Park, Leland said.

Other portions of the trail elsewhere in town are already open and in use.

Where the trail will cross Joslyn Street and then Country Club Avenue, extensions to the curbs will be constructed to reduce the distance needed for users to cross the street. Each crossing will have a rapid-flash yellow beacon trail users can activate to alert traffic to their presence.

These will be the first of these rapid flash beacons installed in the city, Leland noted.

As the trail continues west it crosses Country Club Avenue.

The county obtained the easements from two landowners, each for $1, Bryson wrote, noting that the easements were filed on Friday.

The county provided $300,000 of its CTEP funding toward the first phase of Centennial Trail and $170,000 to assist with construction of the trail's western portion, according to Laura Erikson, the county's community development coordinator.

When this part of the western portion of the trail was being envisioned earlier this year, the city began planning for improvement to the intersection of Joslyn Street with Leslie and Country Club avenues.

Of the three options that were considered for this intersection, Leland said, the preferred choice was to install a four-way stop.

The cost of the four-way stop was then estimated at $100,000, although with more extensive intersection reconstruction, the cost is now about $150,000, he added.

The other two options were to make no changes to the intersection -- which the city commission recognized as a safety issue that needed to be addressed -- or install a roundabout.

City commissioners selected the four-way stop, which was projected to be far less than the $275,000 to $350,000 cost for a roundabout, even though the roundabout was recommended by Dowl, a civil engineering firm.

The roundabout was seen as a way to provide a long-term solution, although a four-way stop was viewed as a “reasonable short-term, cost effective solution,” according to a presentation made to city commissioners.

A four-way stop is seen as a way to meet traffic needs for 15 years, Leland said.

The city is now waiting for the state Department of Transportation to review its plans for Centennial Trail. Leland said the state has many of these proposed uses of CTEP money to review. The city hopes to be able to seek bids this summer and see work start this fall on this portion of the trail.

Improving the intersection could happen much sooner, as this work is no longer tied to the CTEP funds, Leland said.

The city will use some of the roughly $500,000 it receives annually in federal gasoline tax to construct the four-way stop, he explained.

City trail contaminants could be sealed beneath pavement

The two easements obtained recently that further link segments of Centennial Trail involve land with a history of environmental contamination,…

George Glueckert talked about the former railroad bed granted to Lewis and Clark County recently as an easement that will allow the property to be used as part of the City of Helena's Centennial Trail, which will span the city from east to west. The old rail bed is shown extending toward Helena behind Glueckert, who now has a mowing business but used to work for Burlington Northern Railroad when this former spur line was in use.

Jill Morse walks on the Centennial Trail near Henderson Street in this IR file photo from 2009.