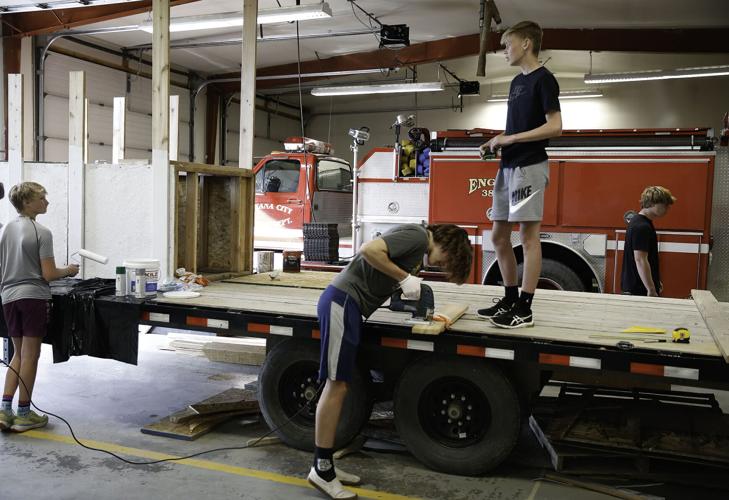 Helena High students work on their float for Friday's 98th Annual Vigilante Day Parade on Wednesday evening. The seven friends are building a Mann Gulch fire-themed float. Taylor Parisot, center, cuts parts for the frame while Trey Schlepp helps. The parade will return to its traditional format this year after several years of COVID disruptions. 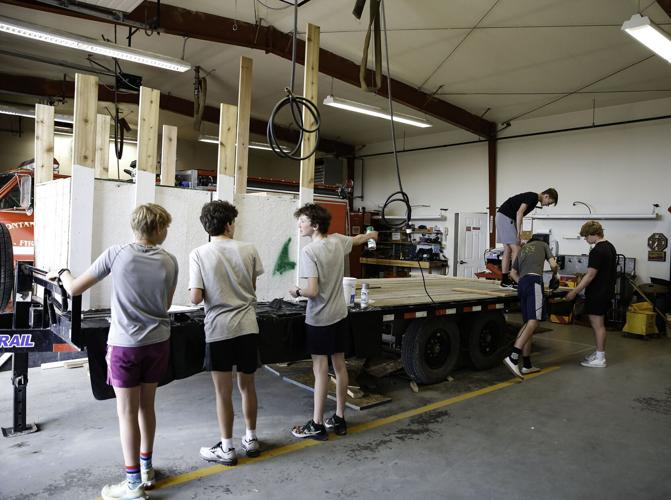 The last nails are pounded while final coats of paint are brushed on. Cowboy hats and pioneer skirts are laid out. Trailers sit loaded down in driveways with an assortment of historical props.

Helena-area high school students are busy putting the final touches on their floats in preparation for the 98th Annual Vigilante Day Parade on Friday.

This year marks the parade’s return to its traditional format running through downtown Helena. In 2021 a “Reverse Parade” was held as people drove by floats that were set up at the Lewis and Clark County Fairgrounds to better comply with COVID-19 restrictions.

While last year’s format ensured the continuation of the parade, students are ready for the return to normalcy.

“We’ve seen an increase in students wanting to get involved in things — everything from clubs to the Vigilante Parade,” said Brett Zanto, Capital High School principal. “Students are wanting to get back to normal.”

“Kids have been pretty let down the last few years,” said Connor Rispens, a senior at Helena High School. “It’s a lot cooler to sit on the sidewalks downtown and hang out during the parade.”

“The parade was pretty hectic last year,” said Taylor Parisot, a junior at Helena High School. “Having the parade go back to how it normally is will be a good time.”

The Vigilante Parade was started in May 1924 by Helena High Principal Albert J. Roberts, who wanted a safe alternative to class rivalry shenanigans that were raising safety concerns. The parade immediately became a beloved community tradition and has continued for nearly a century.

“Everyone looks forward to it (the parade) all day,” said Rispens.

“I remember getting out of school early and sprinting from the middle school to downtown,” said Parisot in remembering attending the parade when he was younger.

According to Zanto, approximately 75 floats will comprise this year’s parade menagerie that will weave its way through Helena’s historic downtown.

The float Parisot is working on will commemorate the Mann Gulch Fire that took place in 1949 along the Upper Missouri River in the Gates of the Mountains Wilderness.

As part of the float building process, students are required to research and write an essay detailing the historical significance of their float theme. Parisot explained that his float crew spent a lot of time researching the landscape of Mann Gulch as well as the airplane the smoke jumpers leapt out of to ensure they recreated the scene authentically. Parisot also shared that their float will have the added special element of being towed by an actual fire engine, thanks to the generosity of the Montana City Volunteer Fire Department.

Rispens, on the other hand, is helping build a float depicting the cabin of "Unabomber" Ted Kaczynski, who once resided in the Lincoln area. He shared that this is a new float theme for the parade.

“We spent a lot of time researching pictures of the cabin to try to replicate it as best as we can,” said Rispens.

Zanto emphasized that the parade requires the hard work and collaboration of students and staff alike. This collaborative effort, Zanto explained, instills valuable skills in students to use later in life for college and/or career building.

Parisot explained that because the rest of his float crew participates in track and field, they’ve only been able to work on their float later in the evenings for the past week. Nonetheless, the students have “been there to support each other,” said Parisot.

Throughout its nearly century-long history, the Vigilante Parade has maintained a reputation as one of Helena’s most unique events.

“It’s about people’s connection to the past,” said Zanto. “For people who have lived in this community their wholes lives, they remember visiting the same establishments and going to the same attractions that are depicted on the floats.”

“It’s a pretty cool experience to be on floats that I remember seeing as a kid,” said Parisot.

For the students, participation in the parade also leads to the creation of fond memories.

“They’ll look back and remember building their floats and being with friends,” said Zanto.

“It’s fun to be with friends working on something for the community,” said Rispens. “I would get so excited for the parade, and I want to make kids feel like how I did when I was younger.”

The Vigilante Parade is scheduled to begin at noon on Friday at the intersection of 11th Avenue and Last Chance Gulch. Floats will proceed through downtown Helena along Last Chance Gulch to Broadway; northeast on Broadway to Park Avenue; and north on Park Avenue to the parade’s end point at Gilbert and Benton Avenue.

“It’s great to see the return of the parade in its traditional form,” said Zanto. “It takes the hard work of staff and students to keep putting this event on and I hope it continues to grow in participation numbers.”

“I want to do my best to make sure everyone realizes that this parade is still a big deal,” said Rispens.

Nearly 2,000 elementary school students got a taste of Beethoven Wednesday during the Helena Symphony Orchestra's annual youth concert at the Helena Civic Center.

Montana students strut their skills at SkillsUSA conference in Helena

Peyton Seymour seems to have welding in his blood.

After projecting a multimillion dollar general fund budget shortfall for each of the next five school years, Helena Public Schools officials are continuing to look for ways to cut costs.

Helena Public Schools will provide a $15,000 retirement incentive to 29 of its highest-paid teachers as the school district faces a projected …

Helena High students work on their float for Friday's 98th Annual Vigilante Day Parade on Wednesday evening. The seven friends are building a Mann Gulch fire-themed float. Taylor Parisot, center, cuts parts for the frame while Trey Schlepp helps. The parade will return to its traditional format this year after several years of COVID disruptions. 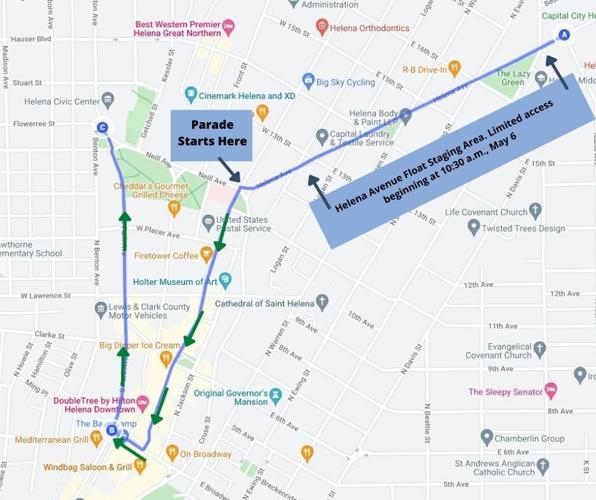