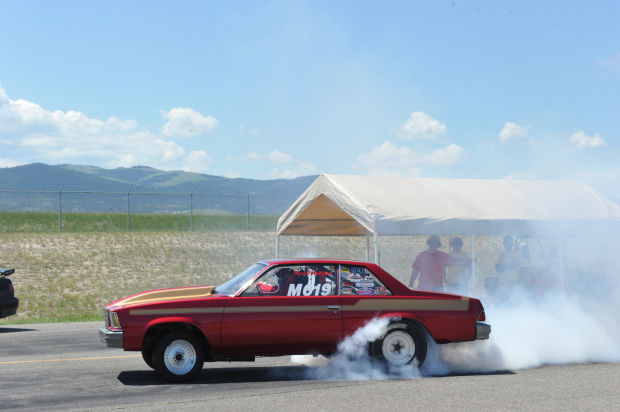 A racer spins tires before reaching the starting line of the Helena Valley Timing Association grad races Sunday. Drivers spin their tires to heat them up, melt some rubber and improve their grip on the one-eighth-mile track. 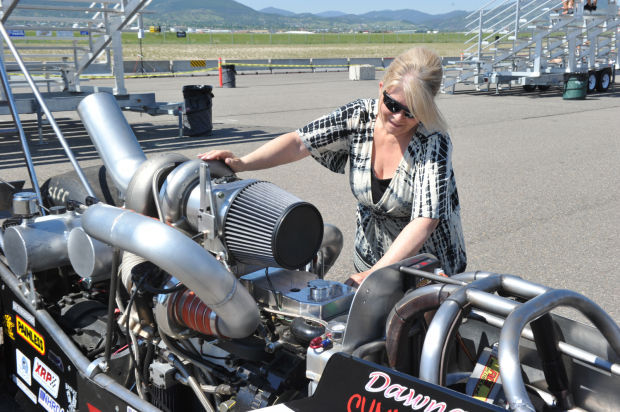 Dawna Kraus of Great Falls works on her dragster, which has the potential to reach speeds of 200 mph. 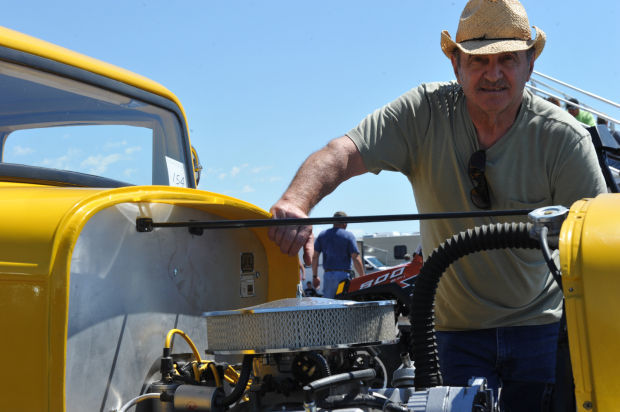 John Dayak of Clancy takes a look at the engine of hisfive-window coupe. 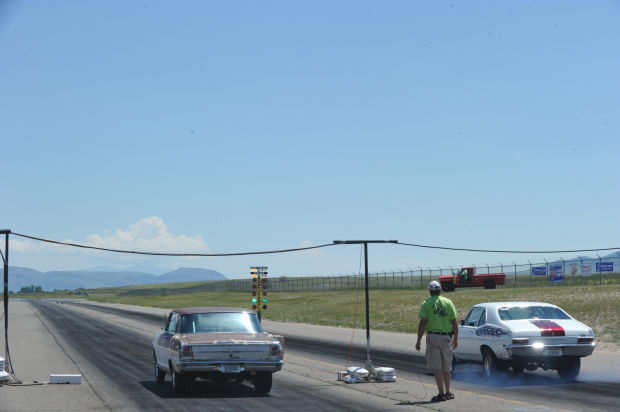 Racers get ready at the 'Christmas tree' of the starting lights.

A racer spins tires before reaching the starting line of the Helena Valley Timing Association grad races Sunday. Drivers spin their tires to heat them up, melt some rubber and improve their grip on the one-eighth-mile track.

Dawna Kraus of Great Falls works on her dragster, which has the potential to reach speeds of 200 mph.

John Dayak of Clancy takes a look at the engine of hisfive-window coupe.

Racers get ready at the 'Christmas tree' of the starting lights.

As the drivers get their rigs ready for the drag races in Helena on Sunday, it’s hard to find a group that doesn’t have some combination of family members working together on the pastime — fathers and sons, husbands and wives, even some grandparents and their kids.

“You can’t really do it by yourself,” said Roger Mudd, the president of the Helena Valley Timing Association, as he shepherded the lined-up vehicles into position to spin out — to heat up the tires, giving them better grip — before inching toward the starting line, waiting for the green light and blazing ahead.

Craig Petersen of Missoula rebuilt his 1957 Chevrolet Bel Air 210 for his father, Monty Petersen, to race. The car has parts all true to its era, although the supercharger (the device replacing as normal carburetor and shoving more air in to the engine for more power) is a 1962 model.

Still, it’s just a work in progress, he said, asked if it would drive and go fast.

“It actually just needs to work,” he saidd. “The going fast part is a bonus.”

The races Sunday were more casual than many in the state. Unlike the races sanctioned by national bodies, the Helena event isn’t divided up into classes of cars; the racers self-organize, somewhat, into positions across from similarly powered vehicles, so that a pro-grade dragster isn’t facing a supercharged Volkswagen Beetle.

“It’s just about fun,” Petersen said of the Helena event. “This kind of race is fun every time you go down the track.”

His son, Cody, in his early 20s, was also considering taking a run Sunday.

Craig said he’s been racing for decades, and he and his father used to travel around racing the “funny cars” of the sport. And about a half-dozen of the old-timers in Missoula still turn out for the “old school” class in the races at Lost Creek Raceway near Anaconda.

“It’s a great way to waste your money,” he said.

From motorcycles to pickups to street-legal muscle cars to dragsters ready for the national circuit, about 54 vehicles were ready to race Sunday, most of them multiple times, with organizers saying they’d keep them rolling as long as they kept returning to the start of the track. A few hundred spectators braved the heat.

Cliff Bloyd of Great Falls agreed that it’s a family thing, though he was the only one racing his 1984 Chevy S-10.

“I got my grandkids’ names on it, that’s going to help me today,” he said.

The relaxed, noncompetitive atmosphere in Helena makes it one of the most fun race days in the state, he said, and everyone’s friendly.

He also acknowledged the expense of the sport.

“Sometimes you think of drag racing as driving down the highway and throwing money out the window,” he said.

Terry Thomas, who teaches automotive sciences at Helena High School, races a Chevy Nova, rescued some time ago from his back yard. He put in a 350 first, and now it runs with a 454, working with students in his auto shop class.

“I called it his training motor,” he said.

He said the Helena event is a good time for people in the racing community to have fun. But there’s some hometown pride, too, trying to take on racers from around the state.

Among the very high end of the racers were Dawna and Ken Kraus, who own the performance motor shop Auto World in Great Falls.

Dawna was driving a real dragster — the kind with tiny front wheels, a narrow body and giant rear wheels. It used what began as a 5.9-liter Cummins engine once destined for a Dodge pickup, now with more improvements than most nonracers can comprehend.

The cockpit of that racer was designed specifically for Dawna’s 4-foot-11 frame, said Ken; the tight confines add to both safety and comfort, he said.

With ongoing adjustments throughout the racing season, the car will top 200 mph, Dawna said. Her powerhouse can crank out 1,500 horsepower.

John Dayak of Clancy wanted a car reminiscent of those in the movie “American Graffiti,” and built his 1932 five-window coupe from the frame rails up. At 2,300 pounds and 400 hp, it drives the way many cars on the road would drive if they had an 800 hp engine — zero to 60 in about four seconds.

“When I retired, it was on my bucket list,” he said.

He figures he’s put about $25,000 worth of parts into the coupe, not to mention the labor.

His own father had him pulling engines apart when he was 10 or 11, he said, and he’d like to get his grandchildren interested in the sport. Already, he said, when the great-grandkids visit, they immediately say, “Papa, hot rod!” he said.

The Timing Association also organized its “Show and Shine” car expo at Broadwater Park Saturday, with about 350 vehicles on hand.

Proceeds from both events go to the association’s scholarship fund, aimed at students learning automotive science at Helena College.

It’s the eighth year for the drag races, and previous years’ events have raised about $68,000 for the scholarship, Mudd said.