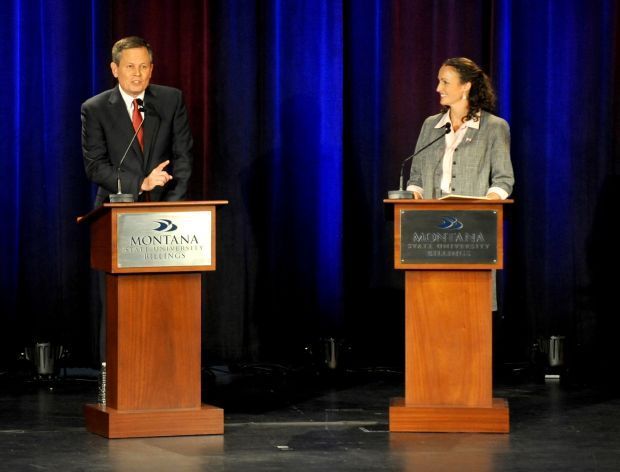 U.S. Rep. Steve Daines and Montana State Rep. Amanda Curtis participate in a political debate Monday at the Petro Theater on the MSUB Campus in Billings. 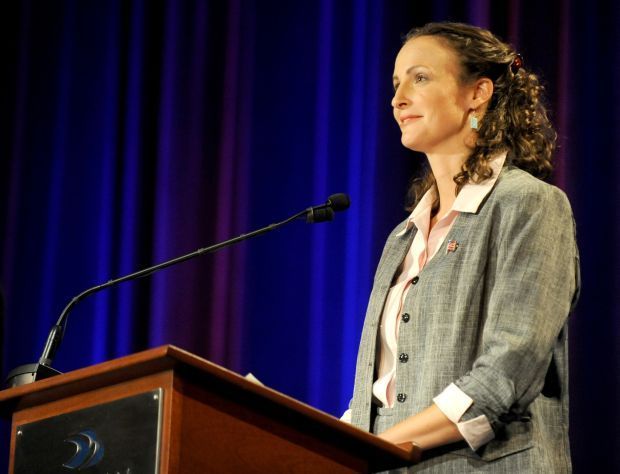 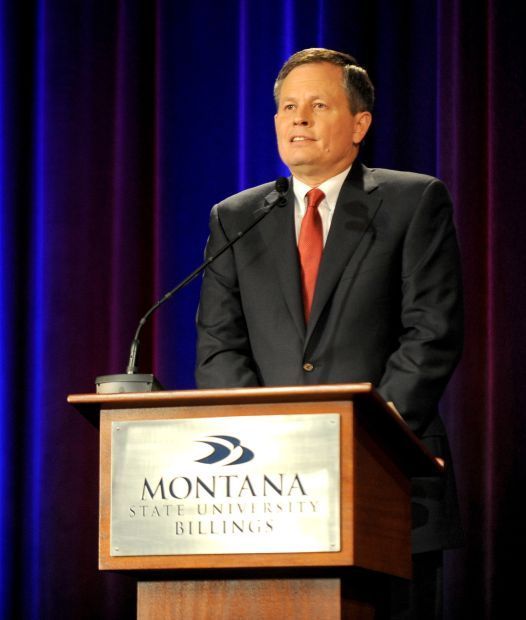 It was the first debate between the two candidates and came just 15 days before the Nov. 4 election. Libertarian candidate Roger Roots was not invited to the debate.

Another debate is set for Sidney on Tuesday.

The debate Monday night was at Petro Hall on the campus of Montana State University Billings and sponsored by the Billings Gazette, Yellowstone Public Radio and Montana Television Network and the university. It was broadcast statewide on television and radio and carried nationally on C-SPAN 2.

In virtually every answer to questions, Curtis, a first-term state legislator from Butte, criticized Daines as “the most extreme congressman we’ve ever had” or someone who looks after the largest corporations and wealthiest Americans.

Over and over again, Curtis reminded the crowd of nearly 500 people that she is “one of us.” She said she is running for the Senate “to prove that you do not have to be a silver-spoon-fed politician to represent working families.”

Daines, a first-term congressman from Bozeman, at first rarely responded to her criticism, but instead blamed Obama for many of the nation’s problems and vowed to find Montana-made solutions, not those from Washington to improve the economy here. Daines repeatedly touted his 28-year experience of creating jobs in the private sector.

When it came to ratings from the National Rifle Association, Daines said he received an “A-plus” grade, the highest mark any Montanan candidate has received, and pointed out that Curtis had received an “F”, the lowest of any Montana candidate in history.

“I think it illustrates her extreme position,” Daines said.

Curtis said she’s a strong supporter of gun rights and said the NRA, once a good organization that represented sportsmen, had become “another corporate lobbying group for special interest.”

She said Daines had received a low rating from a group for his lack of support for public lands.

In his closing, Daines said he has a background different than those of nearly every member of Congress. He talked about watching his parents start a construction company in Bozeman, graduating in engineering from Montana State University and putting his problem-solving skills to use in the private industry before he was elected before to the House in 2012.

He added, “I will stand with the people of Montana. I will not stand with President Obama.”

Curtis, who spoke last, said, “I think after tonight everyone can see that there is a crystal clear choice for Montanans on Nov. 4 between Congressman Daines, the most extreme congressman Montana has ever had, or myself, a woman who is truly one of us, who understands our struggles working month to month without ever getting ahead because D.C. policies tilt the playing field against us at every turn.”

The two candidates disagreed on nearly every issue, but both did said they would oppose putting “boots on the ground” or sending U.S. troops to fight ISIS or the Islamic State in Iran and Syria.

“ISIS is a terrible group,” Curtis said, “but we cannot be the policeman of the world.” She said Congress needs a serious conversation on what that would cost.

Daines called for the United States to have a long-term strategy and called for closing U.S. borders.

Here’s where they stood on some other issues

• FEDERAL GOVERNMENT SHUTDOWN: Daines called it a failure of Washington, with Obama refusing to come to the table and negotiate on the debt ceiling with House Republicans. He said he refused to accept his congressional pay during the shutdown and donated it to the Big Sky Honor Flight. He later bucked his party and voted to end the shutdown, he said.

Curtis said she wouldn’t have voted for the shutdown in the first place. She said it cost Montana millions of dollars and hurt those living on the state’s seven Indian reservations.

• AFFORDABLE CARE ACT: “I will stand with the people of Montana, not with Obamacare,” Daines said. He called for fixing the U.S. health care system in other ways such as through tort reform to limit medical malpractice lawsuit and urging people to start health savings accounts.

Curtis said the 2010 health care law isn’t perfect, but said she’s willing to work with members of both parties to find ways to improve it.

She called Daines “the most extreme congressman we have ever had, who instead of working to find a solution, has thrown a tantrum and voted over 40 times to repeal something that is absolutely saving lives for working families in Montana.” Daines said he had voted only once to repeal it.

• NATURAL RESOURCES DEVELOPMENT: Daines said he supports construction of the Keystone XL pipeline, saying Obama “needs to stand with the people of Montana.” He said the pipeline would create 5,000 jobs in Montana.

Daines said he was confused about Curtis’ position on the pipeline because she initially opposed it and now supports it if the oil is refined in the United States. He said there’s a 39-year-old law that prohibits the export of crude oil.

“All of the oil is going to be refined here in the United States,” he said.

In response, Curtis said, “My dad is a laborer, and laborers are one of the unions that depend on temporary jobs like the Keystone to feed, clothe and insure their kids. I understand more than anyone how important those temporary jobs are to our state.”

Democratic U.S. Senate candidate Amanda Curtis doesn’t deny her sympathies for an obscure union with a radical past — the Industrial Workers o…

Montana State University Billings on Friday announced the latest poll of Montanans' views of statewide and national issues. This is the 27th y…

Republican U.S. Senate candidate Steve Daines and organized labor don’t agree on much -- including whether his voting record is favorable to U…

U.S. Rep. Steve Daines and Montana State Rep. Amanda Curtis participate in a political debate Monday at the Petro Theater on the MSUB Campus in Billings.