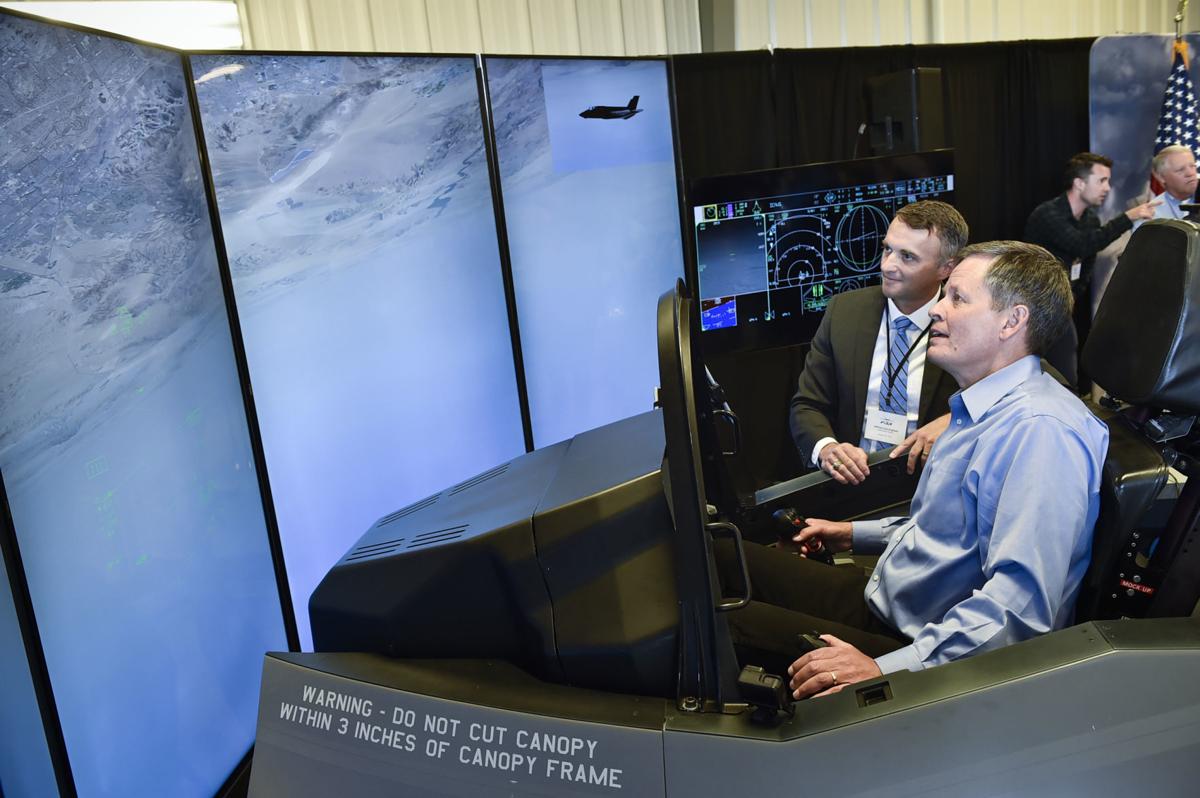 Sen. Steve Daines operates an F-35 Lightning II simulator during a promotional event at the Fire Training Center in this Aug. 26 file photo. 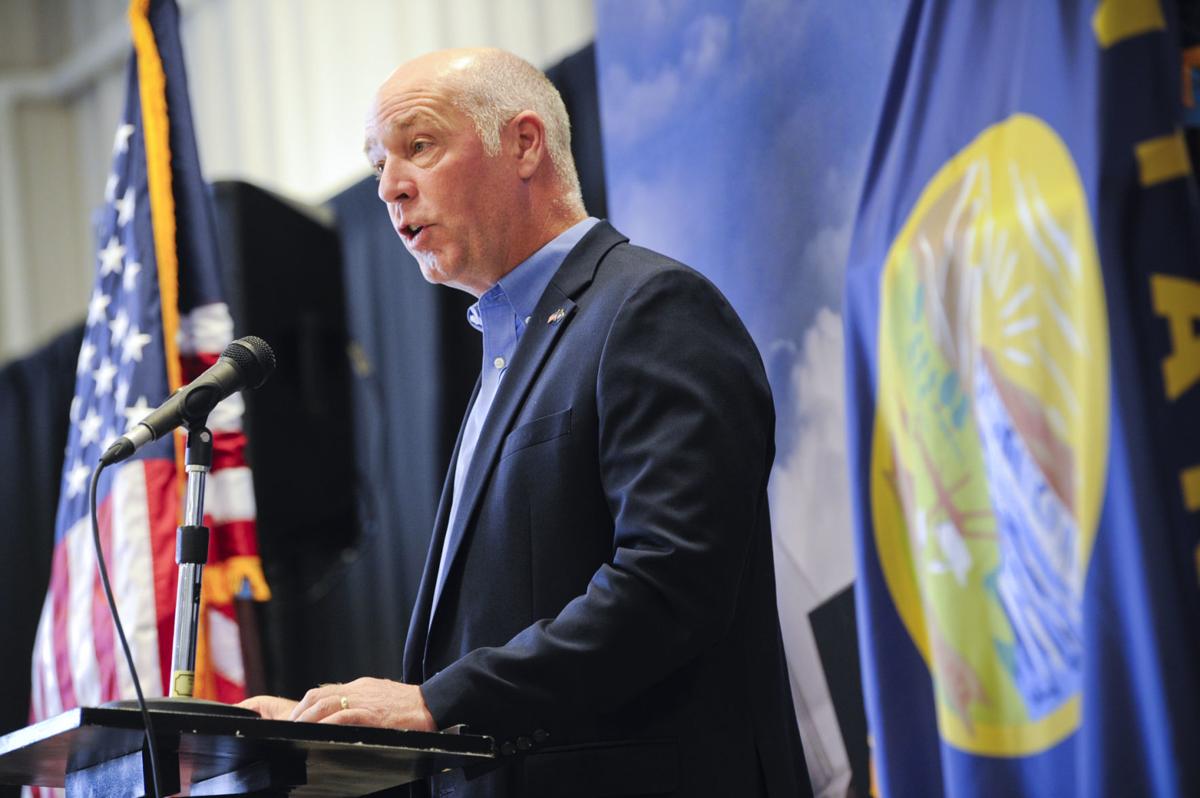 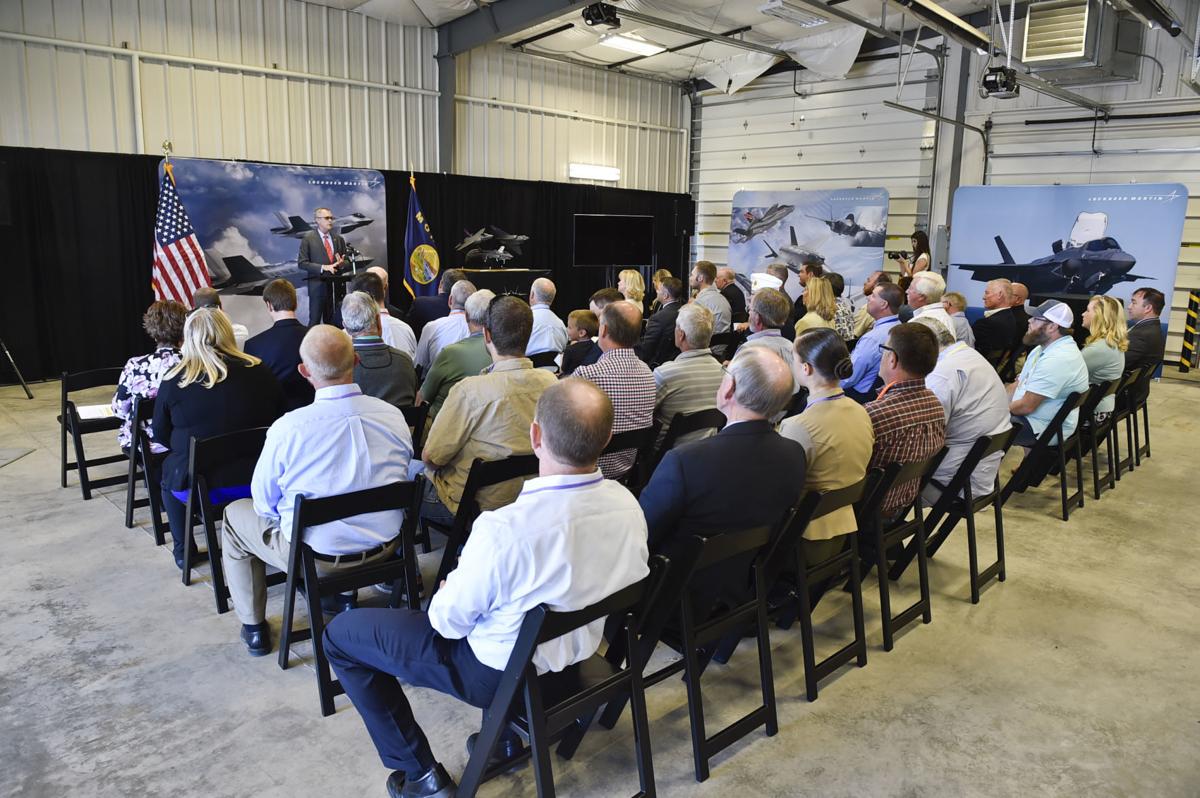 Tom Hoffman, the president of Pioneer Aerostructures, talks about his company's involvement in constructing the F-35 during Monday's event.

A disembodied cockpit and set of screens at Helena's Fire Training Center simulate the world's most advanced fighter jet.

The Lockheed-Martin F-35 Lightning II is a state-of-the-art aircraft intended for use by the United States military and by partners overseas. A stealth fighter, bomber and all-round world-beater, the F-35 is intended give America long-term air superiority.

"I grew up under President Ronald Reagan and he always talked about 'peace through strength,'" U.S. Sen. Steve Daines said. "This is a great example of the technology we need, the F-35, for air superiority."

Sen. Daines and U.S. Rep. Greg Gianforte were in Helena on Monday to test fly the simulator and praise the work Pioneer Aerostructures of Helena does to create the F-35.

"The F-35 is an integral part of our national defense, and I think it's awesome that the main structural element of that plane is constructed right here in Helena," Gianforte said.

Pioneer, an aerospace manufacturing company, produces about 40% of the Lightning II's bulkheads, a structural component that essentially keeps the plane's fuselage together. Tom Hoffman, the president of Pioneer, said he's just happy to be part of such a large and important project.

"There are 32 workers (in Helena) that contribute to the F-35," Hoffman said. "I can't thank Lockheed enough."

Through the F-35 program, some $16 million is injected into Montana's economy, Daines said. Another 190 direct and indirect jobs are also created through the program, according to Lockheed-Martin.

The F-35 Joint Strike Fighter Program has also seen its share of woes since its inception at the turn of the millennium. Soaring costs, technical issues, difficulties with the supply chain, software malfunctions, high-profile crashes and a litany of other problems have plagued the attempt to build the Lightning II.

Lockheed-Martin has pledged to cut production costs for the F-35 down to $80 million per aircraft produced, but vertical-takeoff and aircraft carrier specific variants of the jet still cost over $100 million to produce.

Daines, who sits on the Appropriations Committee in Congress, is tasked with keeping government spending to reasonable amounts.

"We hold the Department of Defense accountable, ensuring they meet both cost targets and project timing targets," Daines said, and he added that the critical function of the F-35 was "critically important and essential" to national defense.

"We need to stay ahead of what's going on with Russia, with China and other potential adversaries around the world," Daines said.

"We have literally seen situations where adversaries won't take off the ground because they know if they come from the sky against us, they can't win."

We gave the company tremendous & controversial community tax breaks to come here...so while it's great there is a sense of money infused in the community. Early estimates of the amount given and what we are missing out on via local revenue was not being made up by payroll taxes for the state or local spending.

I've yet to see anybody follow up on the numbers (probably because they will never be allowed to see the books freely) to prove that giving this company too much is working out positively for us. Jobs? Yeah great but not if we're losing money in the process. Let's remember it's a small number of them and in most of these cases the money giving back in tax breaks and incentives is never made up for communities like ours.

We're most likely subsidizing this company making money from the federal government in the long run...so much for screaming about socialism, eh?

And, despite the jobs this brings to the area, this is how the Military/Industrial complex sucks in politicians to make it nearly impossible to cut defense spending. How? By spreading defense jobs around in a way that really does not make good business sense, but gives politicians like Daines something to crow about.