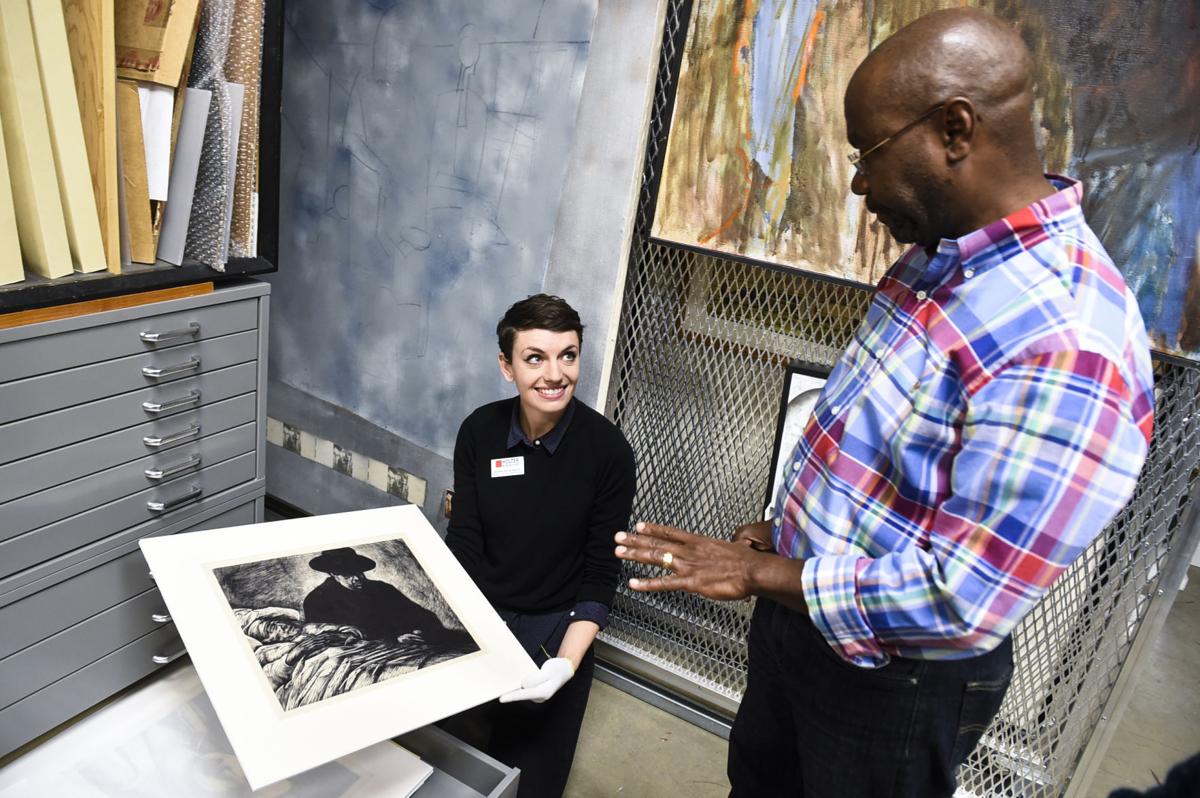 Mayor-elect Wilmot Collins, right, and Holter Museum of Art assistant curator Jennifer duToit-Barrett look through some of the printmaking work of James Todd in the museum's vault Wednesday morning. The Holter invited Collins to kick off a guest curator program, aiming to engage the community with the museum's collection. 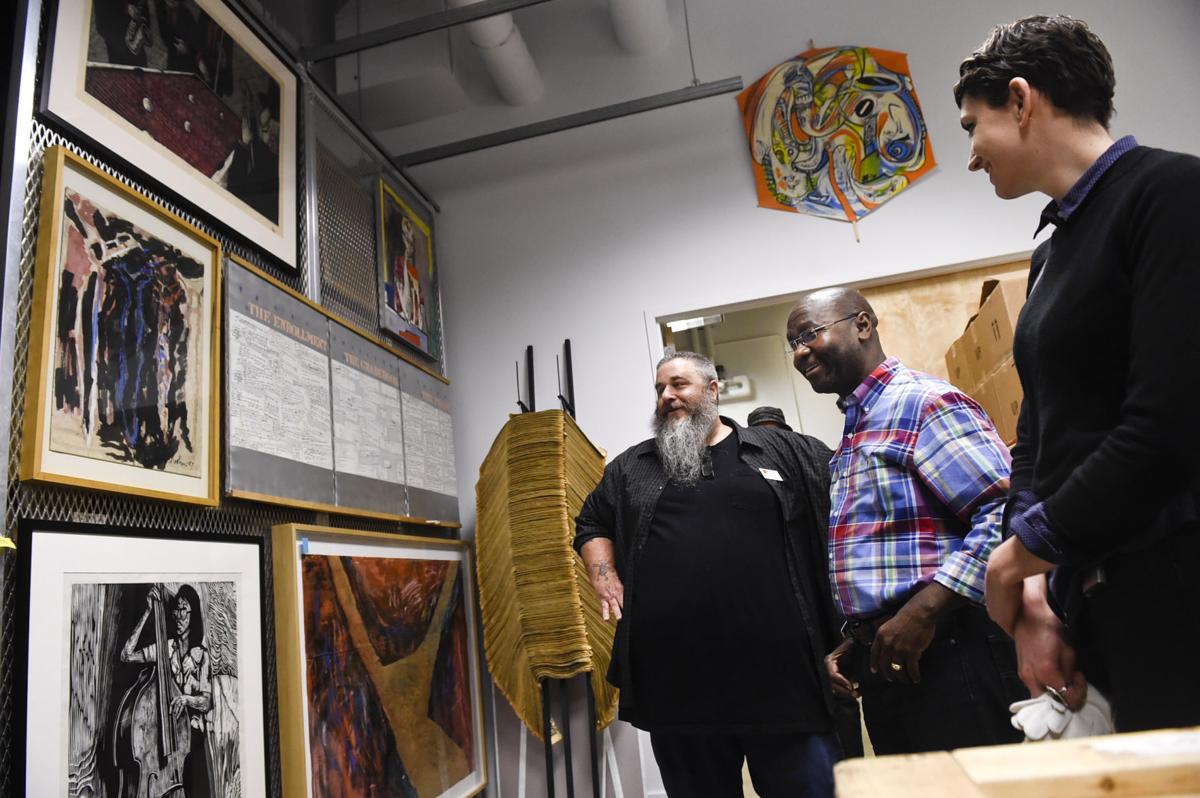 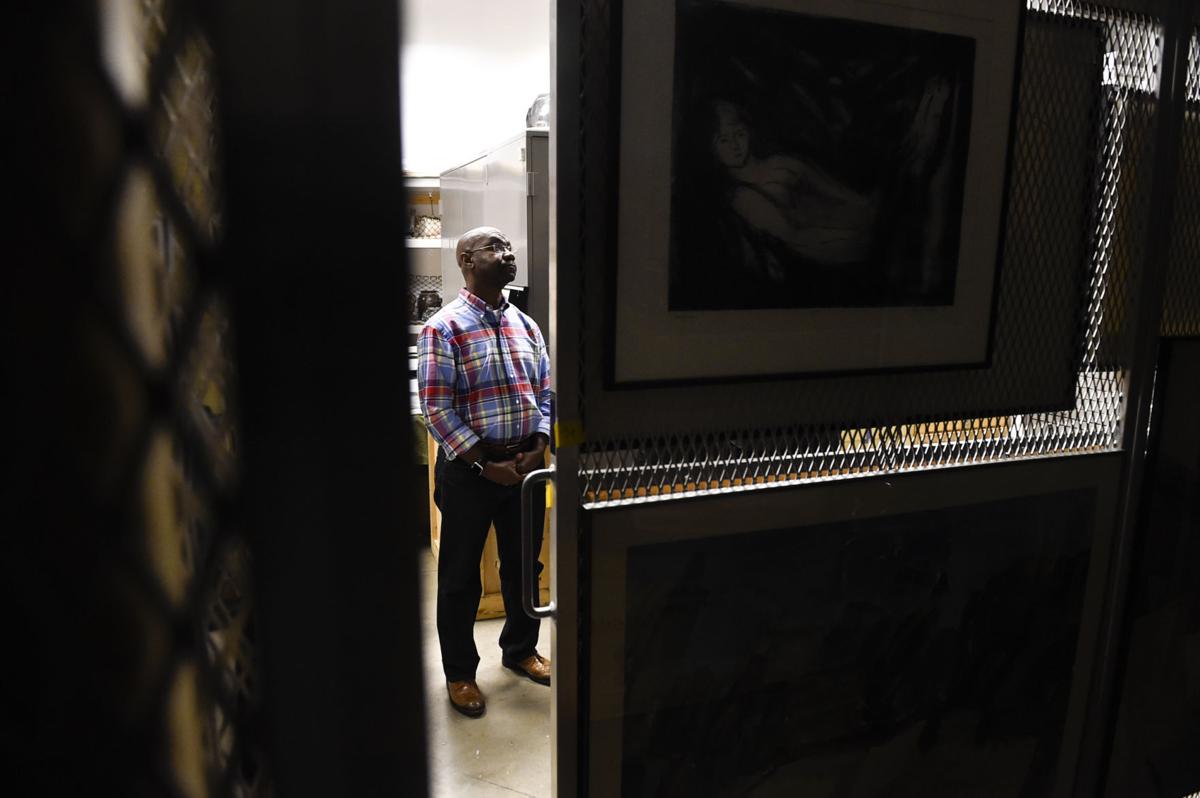 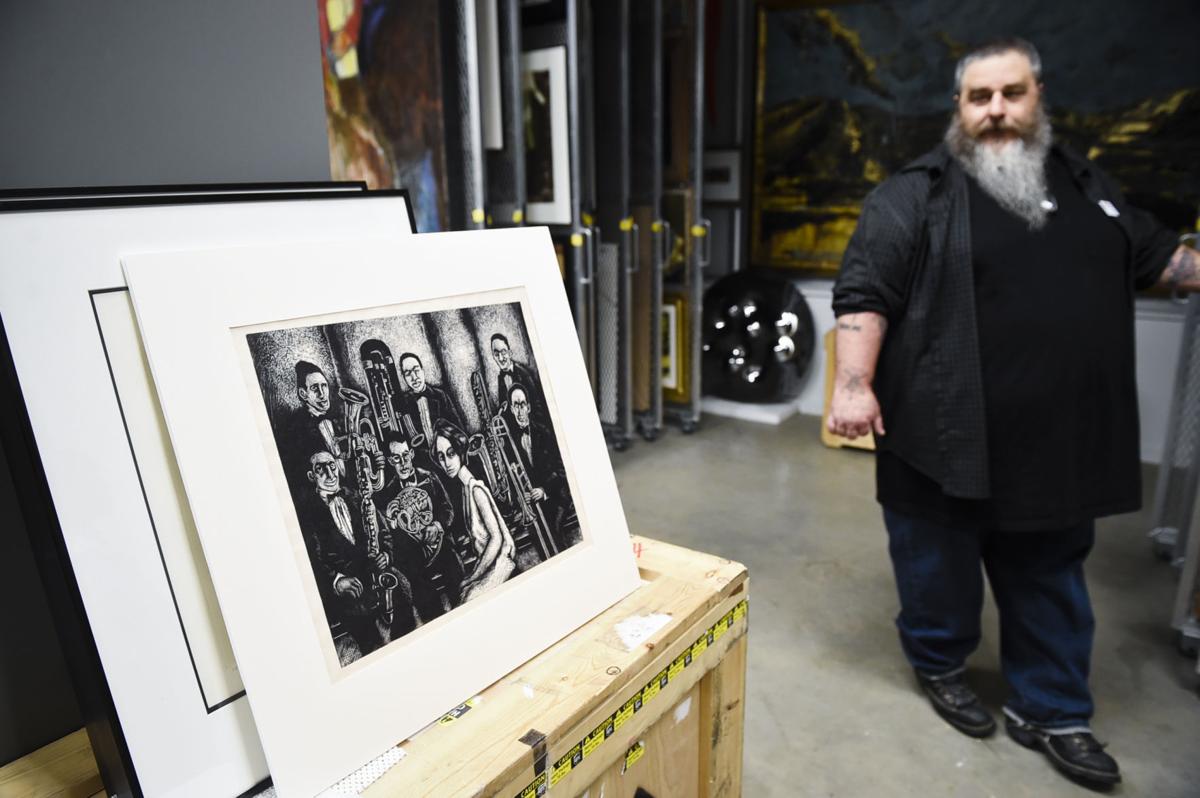 James Todd's "The Last Dixieland Jazz Band," a wood engraving print from 2006, will be in the guest curator exhibit.

Wednesday morning, Helena's Mayor-elect Wilmot Collins stepped in as the inaugural “Curator for a Day” at the Holter Museum of Art.

He’d been invited to pick three to six art items from the Holter’s permanent collection to go on display Jan. 18 in a corner of the Millikan Gallery.

“The idea is why not bring people in and let them be curator,” said Holter executive director Chris Riccardo. And at the same time, showcase some of the seldom-seen items in the Holter’s permanent collection.

“Let’s go into the vault,” Riccardo said, leading the way to the storage area for the permanent collection.

Another was “Jazz Hustlers,” featuring a jazz sax player and mobster-type pool sharks -- including the famous Joe Camel -- all wearing dark shades and black fedoras gathered around a pool table.

Curator Jennifer duToit also introduced Collins to an extensive collection of lithographs by Al Hirschfeld, who was particularly renowned for his pen-and-ink caricatures of famous Broadway and Hollywood stars. At the top of the stack were The Beatles and Sinatra.

But there was a lot more to see.

Riccardo opened a few drawers revealing some of the museum’s prized Meloy ceramics.

And then hanging on storage racks were paintings by Theodore Waddell, Rudy and Lela Autio, and Robert and Gennie DeWeese -- all artists with deep roots in Helena and Montana’s art history.

Although Collins had visited the Holter Museum before, the vault tour was something special.

“This is exposure,” Collins said, and as Helena’s new mayor he’s interested in promoting what the community cares about. “The exposure means so much to our community.”

“It only took one time,” he said of his exposure to a new artist. Now that he’s met Todd’s art -- “This guy is my dude. I love his work. I can’t believe he’s right here in Montana.”

“First of all, I love black and white,” he said of what drew him to the prints. “And then I’m a fan of jazz.”

Todd, who did a popular 2012 Holter show, “Jazz Icons,” will be back with another exhibit in January 2019, showing new work inspired by art he did in his youth.

“We don’t do this enough,” said Riccardo of community outreach, such as inviting in a Curator for the Day.

He wants to draw in people who have never stepped inside an art museum before.

That’s why the Holter did “The Art of the Motorcycle” exhibit in 2016, he said. It drew in record numbers of people who had never been in an art museum before.

It’s all part “of being a better part of our community,” said Riccardo. People see art museums as “snobby” with “nothing in there for me.”

He’s committed to changing that perception and has some exciting new exhibits on tap for the coming year starting in January.

Woman who broke leg at Symphony Under the Stars files suit

A woman who broke her leg during Symphony Under the Stars is suing Carroll College and the Helena Symphony Society for half a million dollars.

From mountain goats to bears, antelope to elk - hunting season was a success for many Montana hunters this year. Readers submitted photos of t…

Here are obituaries published in the Helena Independent Record the week of Nov. 27-Dec. 3.

Wild critters: Animals of Montana from the lens of Instagram

While the grizzly bear is Montana's official state animal, our state is also home to an abundance of other animal species.

Mayor-elect Wilmot Collins, right, and Holter Museum of Art assistant curator Jennifer duToit-Barrett look through some of the printmaking work of James Todd in the museum's vault Wednesday morning. The Holter invited Collins to kick off a guest curator program, aiming to engage the community with the museum's collection.

James Todd's "The Last Dixieland Jazz Band," a wood engraving print from 2006, will be in the guest curator exhibit.