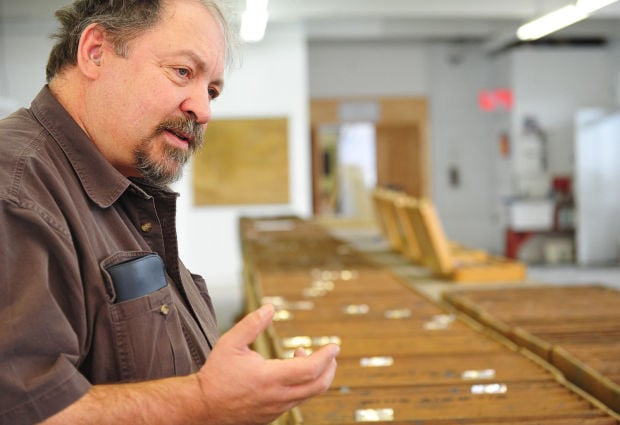 Jerry Zieg, vice president of exploration for Tintina Resources Inc., of Canada, thinks they may have the third-highest grade copper deposit in development in North America at the Black Butte Copper Mine north of White Sulphur Springs. 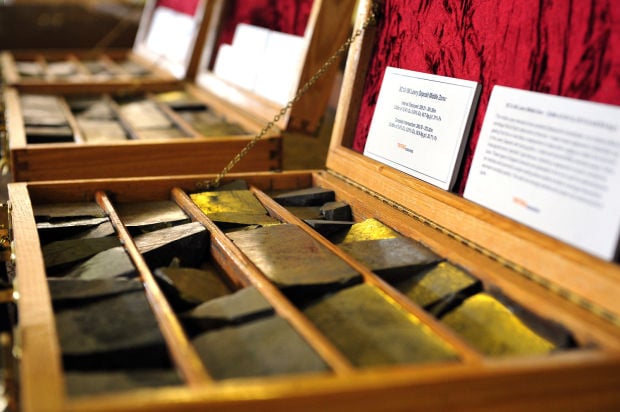 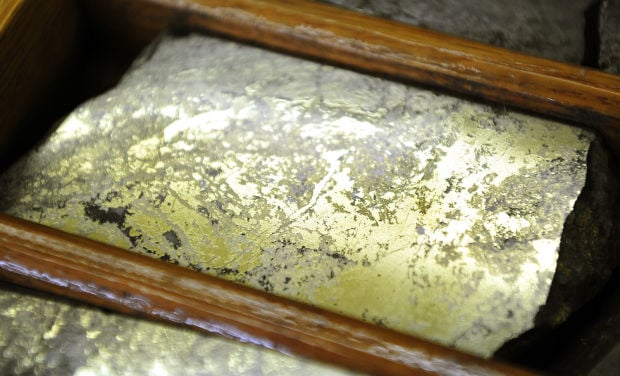 A core sample from the Black Butte Copper Mine shines in the Tintina Resources office in White Sulphur Springs. 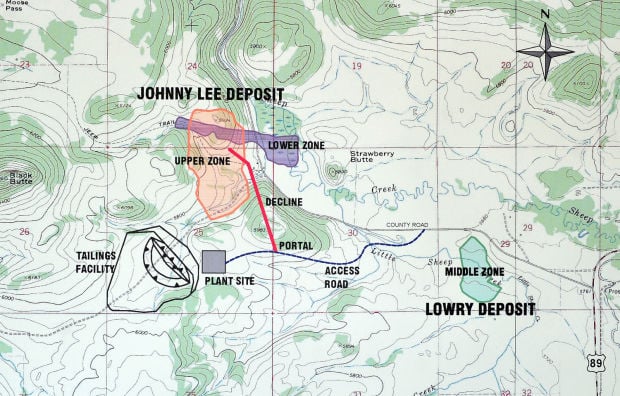 The three zones where Tintina's sampling has shown good results are highlighted in this map north of White Sulphur Springs.

WHITE SULPHUR SPRINGS —The “crown jewels” of the Black Butte Copper mine are kept in three velvet-lined boxes, hinting at what might be an estimated $1.9 billion in copper lying below the surface of farmers’ fields 18 miles northeast of this rural community.

Jerry Zieg is a former White Sulphur resident who now lives in Idaho and is vice president of exploration for Tintina Resources. For the past three years, he’s been working on developing an underground copper mine on about 12,000 acres of public and private lands along Highway 89.

He smiles broadly when asked about the statements on the company’s website regarding the possible value of the copper deposits near Sheep Creek. Zieg isn’t given to making grandiose claims, but he’s pretty proud of the core samples they’ve pulled from the ground and polished until they glow like newly minted pennies.

“You don’t see much stuff that’s this flashy,” he says, noting that the core samples generate a lot of interest at trade shows. “When you look at a typical box of gold ore, it’s usually pretty drab looking stuff. You can’t see the gold in most places.

“Rarely do you get stuff with a lot of visual impact like this.”

In the past three years, Canadian-based Tintina has spent $18 million in exploration costs here, and now boasts that the Black Butte Copper mine is the third highest grade copper deposit in development in North America. To support that claim, the company says it has drilled hundreds of core samples totaling 178,800 feet, plus looked at 123,000 feet of other companies’ core samples.

Now Tintina is seeking an amendment to its exploration permit to construct a “decline” — or underground ramp — which will let them take a peek underground at what they’re calling the Johnny Lee copper deposit.

“The gives us the opportunity to take bulk samples and examine the metallurgic makeup,” Zieg said. “And once you’re underground, you can drill in any direction and better define the resource.”

Warren McCullough, a bureau chief with Montana Department of Environmental Quality, said if the state approves the permit amendment, Tintina will be allowed to remove up to 10,000 tons or rock for bulk sampling.

“We are doing an environmental analysis of their request for that amendment,” McCullough said. “I know there are a lot of people keenly interested in having a reputable company working on this.”

A preliminary economic assessment (PEA), which models the value of the deposit, forecast that the Johnny Lee deposit could produce a single copper concentrate containing an average of 47 million pounds of payable copper metal per year during a 14-year mine life. That translates to 658 million pounds of copper, which at $3 per pound, would have a value of $1.97 billion.

“This preliminary study shows the economic viability of the high-grade Johnny Lee copper deposit — the first deposit we expect to be developed in a district which management feels has excellent exploration potential,” Rick Van Nieuwenhuyse, Tintina executive chairman, said in a press release. “This study sets the stage for feasibility level work, scheduled to begin in the coming months.”

Zieg adds that there’s another area of interest, known as the Middle Zone Lowery Deposit. They’ve decided to update their PEA to include that, which Zieg says may increase the life of the mine as well as the amount of ore extracted.

“We felt we need to redo the analysis to take into account that economic assessment,” Zieg said. “That work is in progress and should be completed in the next month or so.”

He cautions that even though the mine models may pencil out on paper, they still have a lot of work to do before any actual mining takes place. If they get the permit amendment for the decline, that work probably wouldn’t take place until the fall. They hope that as well as having the underground mine, they’ll also have a mill on site.

Zieg said before he takes each step forward, he needs the approval of the Tintina board of directors. Tintina also needs funding, which is difficult for mining companies these days.

Conservation groups in Montana say money and permits are not the only difficulty the mine may face. Mark Aagenes with Trout Unlimited said they’re concerned about possible impacts to Sheep Creek, which is an important tributary to the famed Smith River.

“The potential ramifications are incredible,” Aagenes said, noting his concerns about both the water quality and quantity.

Both Aagenes and Jim Jensen, executive director of the Montana Environmental Information Center, note that the rock in which the copper is intertwined has high sulfide levels. When sulfide is exposed to air and water, it causes what’s commonly known as “acid mine runoff.” That’s a significant problem in Butte, where the 900-foot-deep Berkeley Pit, carved out from a copper mine, holds a 30 billion gallon stew of highly acidic water.

Jensen notes that once they expose the sulfides to the air, even just with a decline ramp, water can seep in and start producing the acidic runoff.

He added that in Wisconsin, mining in areas with high sulfide levels is prohibited unless a company can point out examples where a mine with similar geology has been closed for 10 years without experiencing problems.

“They haven’t been able to find any,” he added wryly.

Aagenes also is worried that if the ore is processed onsite as planned, using a flotation circuit process that uses water and chemicals to produce a copper concentrate, that they’ll diminish the flows into Sheep Creek and ultimately flows in the Smith will drop.

“Anybody’s who’s floated the Smith knows they can only do that because of the added stream flows that Sheep Creek provides,” Aagenes said. “It’s also a critical spawning tributary.”

Zieg is well aware of those concerns, and Aagenes readily acknowledges that Tintina has been working with Trout Unlimited to work on ways to mitigate those issues.

“I know Jerry Zieg and Tintina are committed to having a state-of-the-art mine and have all the requisite protections for Sheep Creek,” Aagenes said. “That said, I can’t say that all of our concerns have gone away.”

The Park County Environmental Council also is closely watching Tintina’s activities. Kerry Lee, the PCEC executive director, said they have members who live along Highway 89 and are worried about the additional vehicular traffic from mine trucks.

“The PCEC is concerned about this and has added it to our list of issues we’re watching,” Lee said. “Our members along Highway 89 are concerned about the increased possibility of accidents from the extra truck traffic and wear and tear on the highway.”

While Tintina is facing some hurdles in permitting the mine, it has the support of just about the entire town of White Sulphur Springs, according to Heith Stidham, president of the city council.

He noted that at an open house held a few weeks ago by Tintina, more than 120 people attended and while people had questions, “the support of the public is absolutely phenomenal.” Part of that probably has to do with the historic lumber mills that shut down decades ago, prompting a drop in population for White Sulphur Springs and the shuttering of many Main Street businesses.

“Everybody is ready for opportunity, to get jobs flowing and get our little town back on the road again,” Stidham said. “Tintina has such a great reputation and the way they’re working with people here and with DEQ – it’s been a pleasure.”

Zieg estimates that if and when the mine is fully operational it will employ about 150 people in good-paying jobs. He said that it’s possible the mine could operate longer than 14 years if they find additional copper deposits to develop.

Stidham is well aware of the difficulties associated with the boom and bust cycle of resource development, and he said White Sulphur Springs is ready — to a point — for the boom. They recently upgraded the town’s water supply system and are preparing for improvements to the wastewater treatment system. A couple of housing projects are slated for construction this summer, and he said they have a ready supply of rental homes available.

“Even if it’s just for 14 or 15 years, it will be a boost for us,” Stidham said. “Main Street has been pretty quiet and it would be nice to see their employees shopping at Main Street businesses.”

“Jerry being from here is a huge bonus,” Stidham said. “Everybody trusts him and knows that he will put White Sulphur right up front.”

The company exploring near the headwaters of the Smith River for a potential copper mine met with river outfitters in Helena on Wednesday.

Jerry Zieg, vice president of exploration for Tintina Resources Inc., of Canada, thinks they may have the third-highest grade copper deposit in development in North America at the Black Butte Copper Mine north of White Sulphur Springs.

A core sample from the Black Butte Copper Mine shines in the Tintina Resources office in White Sulphur Springs.

The three zones where Tintina's sampling has shown good results are highlighted in this map north of White Sulphur Springs.