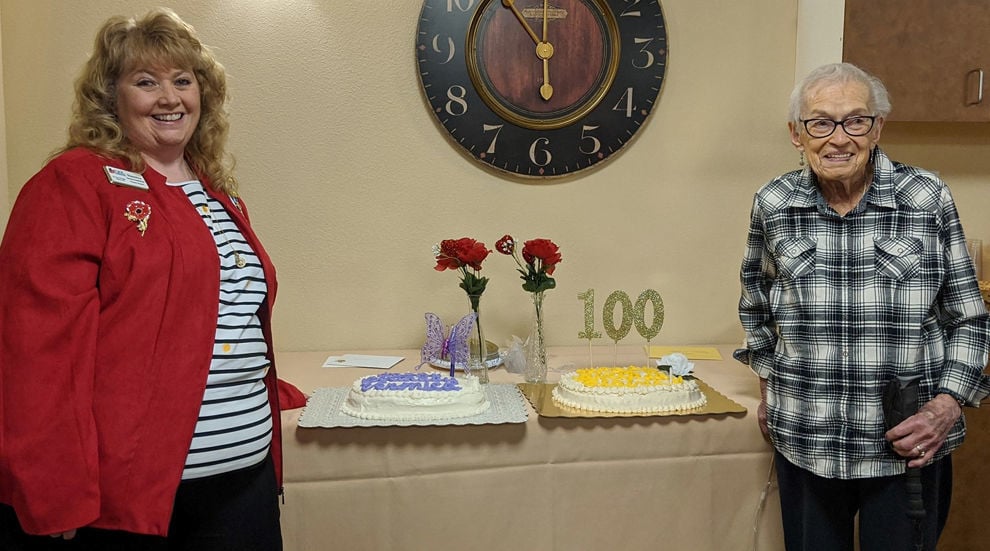 Oro Fino Chapter Daughters of the American Revolution Chapter Regent Veronica Bovee-Anderson, left, celebrated her 50th birthday and member Elaine Cooper Power celebrated her 100th birthday together with 26 other Daughters at the February DAR meeting. Stories about DAR members and their work can be found at www.dar.org/million and women interested in becoming involved can see www.dar.org/membership.

Helena High Theater’s thespians participated in the states oldest theater festival in Montana, at the 2020 Montana State Thespian conference in Missoula at the University of Montana. See accompanying brief. 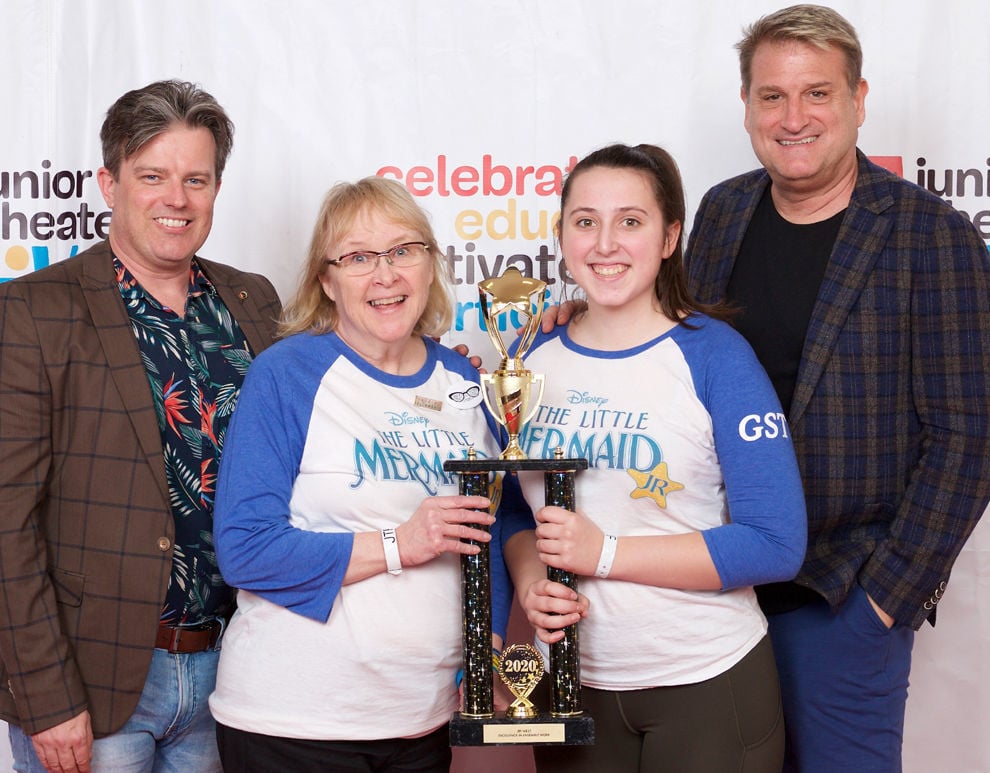 St. John's Lutheran Church is celebrating 125 years as a congregation in Helena. A video presentation of the history of the church will be presented Sunday, Feb. 16, during the 9:30 a.m. worship service. This will include historical pictures of the church as it was beginning in 1895 when Swedish immigrants founded the first Lutheran church in Montana. The current building location was built in 1950.

Several musical concerts and activities will be held at St. John's over the next several months in honor of the 125th anniversary of the church. People in the community who are longtime members of the church or who have historical pictures of St. John's Lutheran Church are invited to share them with the congregation. Call the office at 442-6270, or drop by between 9 a.m. and 1 p.m. weekdays.

Bring a brown bag lunch. Other refreshments are provided. Cranium Café is free, however non-perishables for Helena Food Share are suggested as a donation. Cranium Café begins at noon at 2330 E. Broadway.  All programs occur in handicapped accessible facilities and all HCC programs are life enrichment for those over 50. Contact Nanette at 449-4900 for more information. Visit www.bridgeshcc.org.

Students of the CHS DECA Club are hosting a fundraiser for CHS senior Alex Barker who was recently diagnosed with leukemia. Students at Capital High are selling raffle tickets for the chance to win a 2000 Toyota Camry. Capital High’s Haley Moseman has already raised over $1,500, but she hopes the raffle will raise more to help Barker and his family cover his medical costs.

Raffle tickets are $10 or $15 for two and are available at Prestige Automotive, Helena Athletic Club, Capital High School, Capital City Barber and C.R. Anderson. The drawing will be held at the crosstown basketball game on Feb. 21.

Helena High Theater’s thespians recently participated in the states oldest theater festival in Montana at the 2020 Montana State Thespian conference in Missoula at the University of Montana.

The festival living up to the thespian ideal of fostering excellence in theater is a non-competitive event, however awards were given for outstanding student achievement.

Sarah Melborne Baker was awarded a University of Montana $750 merit scholarship (meaning she had to audition for it) and an Outstanding Actress in a Drama award for her role as Eva in Rylee Reynold’s original play “Wasps” directed by student Jillian Richards. The show also took the Outstanding 10 Minute Performance award. The cast of “Why You Shouldn't Let AI Write Scripts For You” written by Charles Barnett and directed by Baker, received an Outstanding Ensemble award.

One scholarship will be awarded to a student from each community where Morrison-Maierle has an office. This includes Billings, Bozeman, Great Falls, Helena, Kalispell and Missoula in Montana, Casper, Cody, Gillette and Sheridan in Wyoming, and Spokane, Washington.

Scholarships may be used by those attending a higher-education institution on a full-time basis starting in fall of 2020. Students of all majors and fields of study are encouraged to apply.

Morrison-Maierle is accepting applications from now until March 15, 2020. Late applications will not be considered. Download an application at https://m-m.net/wp-content/uploads/2020/02/Scholarship-Application.pdf.

Grandstreet Theatre’s Aidan Van Wyk and Quincey Higgins were named to the Junior Theater Festival All-Stars, made up of outstanding performers attending the festival. The All-Stars performed a song during the closing ceremony for all 2,200 festival attendees.

Produced by the Junior Theater Group in partnership with iTheatrics, a leading educational theater company that creates innovative experiences and products for both the public and the private sector, the Junior Theater Festival West celebrates young people and the transformative power of musical theater.

Teresa Patten, of Helena, was recently initiated into The Honor Society of Phi Kappa Phi, the nation's oldest and most selective all-discipline collegiate honor society. Patten was initiated at Montana State University.

Patten is among approximately 30,000 students, faculty, professional staff and alumni to be initiated into Phi Kappa Phi each year. Membership is by invitation only and requires nomination and approval by a chapter. Only the top 10 percent of seniors and 7.5 percent of juniors are eligible for membership.

Carsen Dodge, of Clancy, has been named to the dean's list for the fall 2019 semester at Cornell College in Mount Vernon, Iowa.  Dodge received a 4.0 GPA.

Congressman Greg Gianforte announced that Brock McDaid of Townsend received an offer of appointment to the United States Military Academy in West Point, New York. McDaid is a senior at Broadwater High School.

McDaid is a member of the National Honor Society and Business Professionals of America. He also plays football and wrestles for the Bulldogs.

Six students from Capital High, Lea Hohenlohe, Jasmine Kunda, Abigayle Bibeau, Alex Crisp, Adrian Rincon-Jimenez and Haley Cox, traveled to Dillon to compete in the Regional Poetry Out Loud competition Feb. 12. They will be vying for the chance to go on to the state contest where one Montana student will win a trip to the National Finals in Washington D.C. in April.

The 2019-20 Poetry Out Loud competition is the state’s 15th. Poetry Out Loud nurtures a love and appreciation for poetry through memorization and recitation of contemporary and classical poems by reputed poets. Participants gain confidence in public speaking skills and in the interpretation of poetry. The National Endowment for the Arts partners with the Poetry Foundation to fund the event; Montana’s local sponsor is the Montana Arts Council. For more information about the competition, visit https://art.mt.gov/pol and Poetryoutloud.org.

The Montana State University-Northern’s fall 2019 semester dean’s list has been released. To be included in the dean’s list, students must carry a minimum of 12 credits and earn a grade point average of 3.25 or better.

Oro Fino Chapter Daughters of the American Revolution Chapter Regent Veronica Bovee-Anderson, left, celebrated her 50th birthday and member Elaine Cooper Power celebrated her 100th birthday together with 26 other Daughters at the February DAR meeting. Stories about DAR members and their work can be found at www.dar.org/million and women interested in becoming involved can see www.dar.org/membership.

Helena High Theater’s thespians participated in the states oldest theater festival in Montana, at the 2020 Montana State Thespian conference in Missoula at the University of Montana. See accompanying brief.