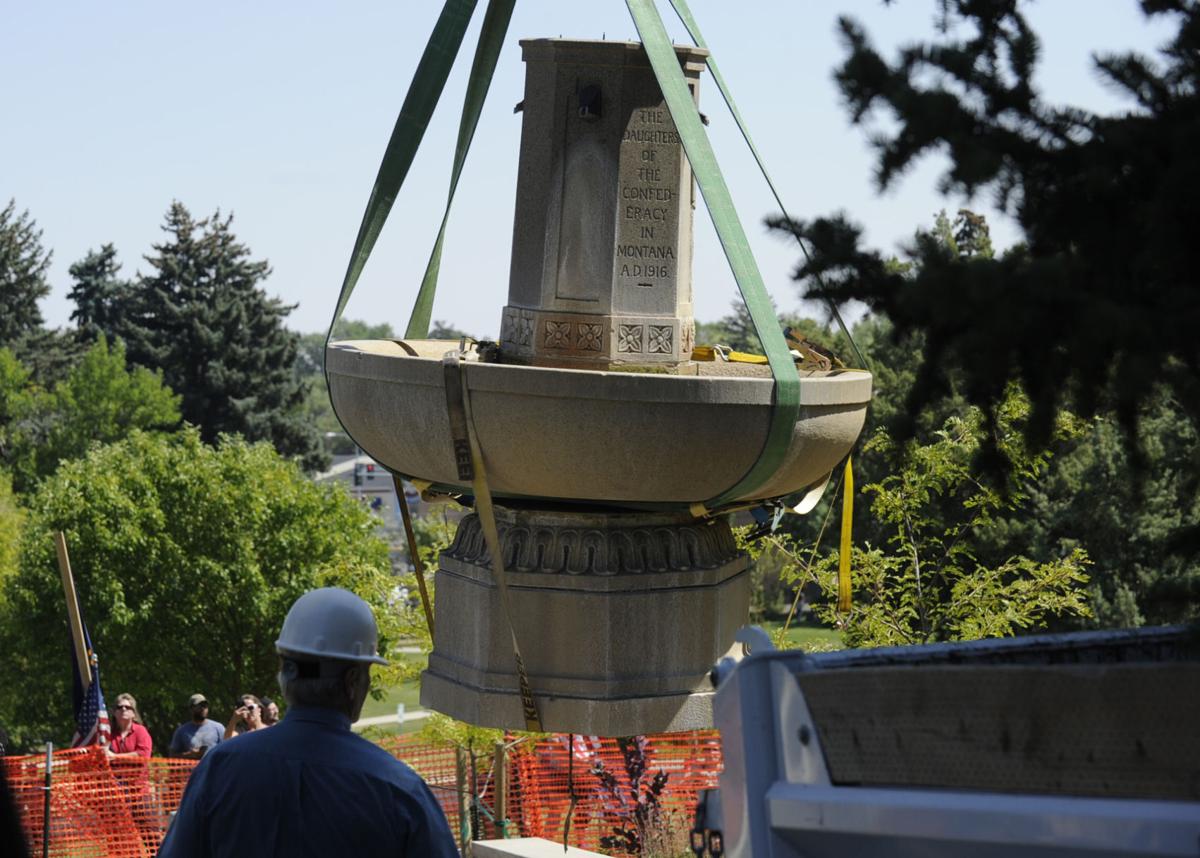 People gather at the Confederate fountain in Hill Park on Aug. 18, 2017, as city employees, under police guard, remove the monument. The city commission won't put a request on their agenda to discuss returning the monument to the United Daughters of the Confederacy. 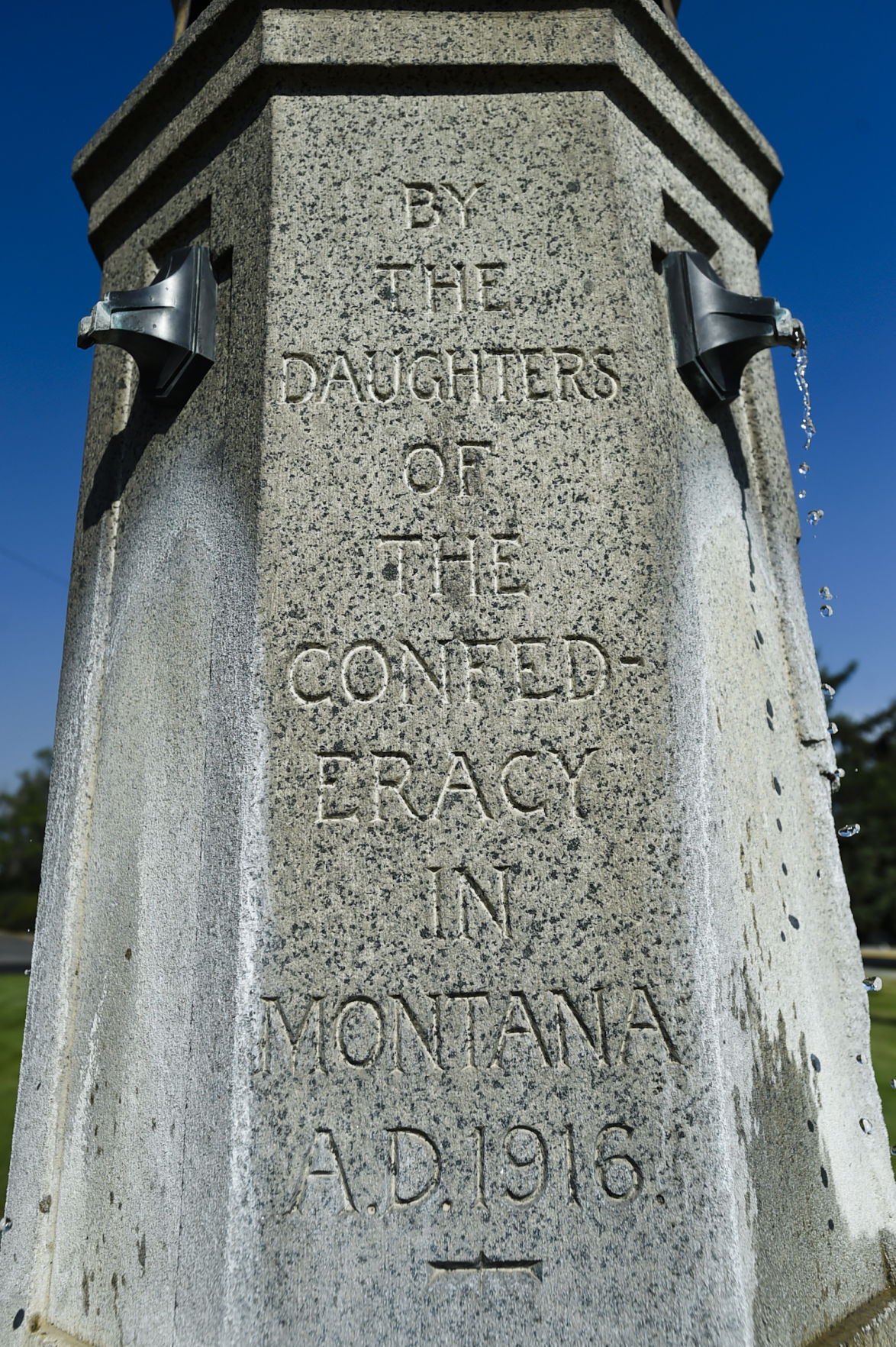 A Confederate monument removed by Helena city leaders several years ago will apparently remain in cobwebs despite offers from the group that donated the water fountain -- which one commissioner described as a “monument to white supremacy” -- to relocate it out of the Queen City.

Commissioner Sean Logan said at Monday’s meeting that Jewel Wellborn had asked to have it placed on the agenda. He said the panel could do so or tell her it was not interested.

"I am just trying to gauge the interest of the commission," he said.

Wellborn is president of the Colorado-based Margaret Howell Davis Chapter of the United Daughters of the Confederacy. She said in recent emails to city officials that her group would like the memorial back and pay for its removal. Recently, she said the memorial could be moved to Texas.

The United Daughters of the Confederacy donated the Confederate Memorial Fountain that had been in Helena's Hill Park in 1916. It was removed in 2017 due to racial concerns after a woman had been killed at a white nationalist rally in Charlottesville, Virginia, during a clash over the removal of a statue honoring Confederate Gen. Robert E. Lee.

The Montana Legislature’s American Indian Caucus also had requested the monument be removed, saying it was commissioned by a group that openly supported white supremacist views and said it sent a “harmful message … to Indians, minorities, and all Montanans of this great state.”

Logan said Monday the commission could either direct the city manager to place discussion about the monument on a future agenda or tell Wellborn the panel is not interested.

Commissioner Emily Dean spoke against placing it on an agenda, noting that Wellborn is not a constituent of the city or resident of the state. She said there are a lot of other issues that need the commission’s attention.

“Our meeting time is extremely valuable and I don’t necessarily think this is a priority that we need to be spending meeting time on,” she said.

“We receive requests from outside agencies including folks in Helena all the time who ask for us to discuss things or endorse things,” Haladay said. “I don’t know why this request for a monument to white supremacy earns even a discussion of this.”

Wellborn said in an email to commissioners Tuesday that she would like to talk with City Manager Rachel Harlow-Schalk to discuss the removal of the Memorial Fountain, saying the nonprofit groups -- The Margaret Howell Davis Hayes Chapter and the Rocky Mountain Conservation Council -- she is working with has found a home for it in Texas.

“It is obvious that the City of Helena wants nothing more to do with the Memorial or the United Daughters of the Confederacy,” Wellborn wrote. “As such, I would like for Ms. Harlow-Schalk to consider her right to remove the monument and present it to a 501(c)3 organization.”

“We had great news over the weekend as we located a 501(c)3 Historical site in Texas, Fort Chadbourne, whose foundation is willing to accept and give a permanent home to the Memorial Fountain,” she stated in her email.

“Let's work together to resolve this and remove this memorial to a safe place, away from the present tensions it brings to the City of Helena,” Wellborn wrote.

The fountain reportedly remains wrapped in a tarp in an undisclosed location.

Group that donated Confederate fountain to Helena wants it back

Helena city officials said they were open to discussing the fate of a displaced Confederate monument, after the leader of the group that donat…

Decorating a public tree in Helena? Be sure to clean up afterward

The Helena Parks and Recreation Department posted on the city's website recently that it loves the holiday spirit people are bringing to trails and other open land by decorating trees, but this practice is causing "a litter issue."

People gather at the Confederate fountain in Hill Park on Aug. 18, 2017, as city employees, under police guard, remove the monument. The city commission won't put a request on their agenda to discuss returning the monument to the United Daughters of the Confederacy.