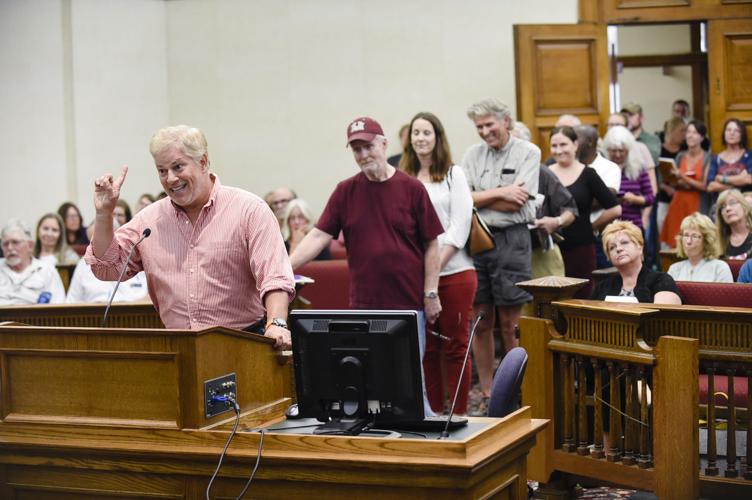 Jon Lovi calls for modifying the Confederate fountain in Helena's Hill Park and removing all references to the Confederacy. 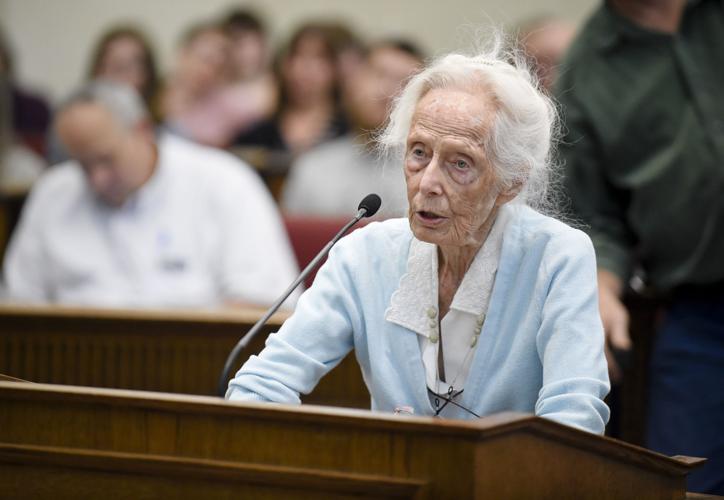 Barbara Kirkland argues in favor of leaving the Confederate fountain the way it is during Wednesday's Helena City Commission meeting. 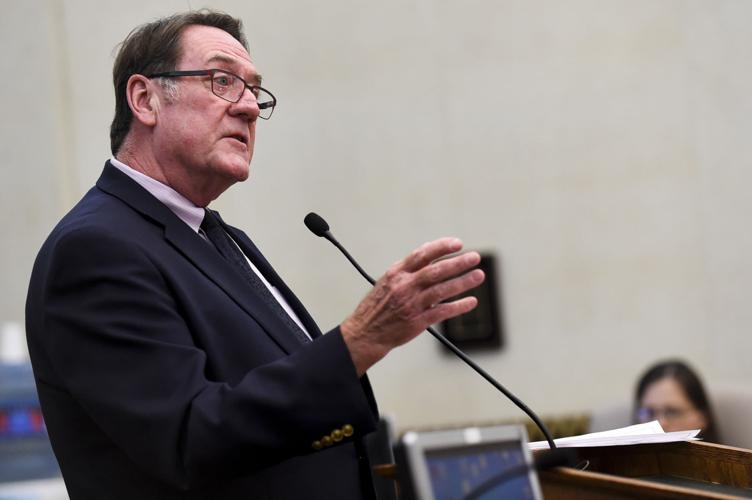 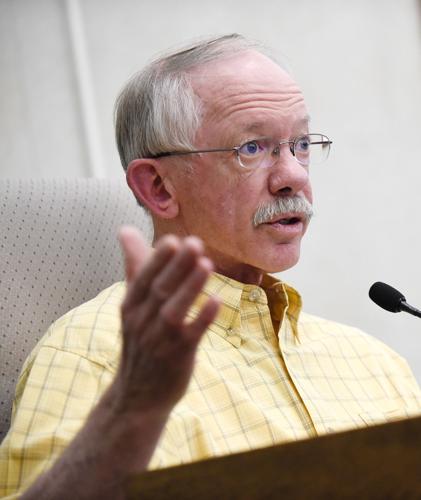 City Commissioner Dan Ellison gives a statement early in Wednesday's meeting calling for the removal of the Confederate fountain at Hill Park.

Though no official vote was taken, the Helena City Commission has directed the city manager to remove a Confederate memorial from a city park.

Native American lawmakers in Montana called on the city to remove the granite fountain from Hill Park in downtown Helena Tuesday, following a weekend of violence, including a death, at a white nationalist rally in Charlottesville, Virginia. During an administrative meeting that included nearly two hours of public comment Wednesday, commissioners said the removal should be completed as quickly as possible, citing public safety concerns.

Helena City Manager Ron Alles said he will meet with his staff to figure out the best process of removal. The timing will be part of the discussion.

“I need to get the logistics and specs,” he added.

Helena Mayor Jim Smith said city officials have not yet decided what will happen to the monument after it is removed.

Smith has previously said he opposed removing or altering the fountain, which was commissioned by the United Daughters of the Confederacy and dedicated in 1916, but he has changed his mind in light of recent events.

"I believe the time has come for the removal of the fountain," Smith said.

Commissioners Dan Ellison, Robert Farris-Olsen and Ed Noonan agreed that the fountain should be removed. They did not waver after listening to statements from 40 people, whose comments ranged from pleas to keep to monument honoring fallen soldiers to queries about the possibility of rededicating the fountain.

Ellison spoke to the urgency of the matter. In the past, he has expressed concern with quick action without much community involvement. He said he will “accept any reproaches that result from my doing the same today.”

“I believe that if the fountain remains in the park there will likely be a confrontation where high emotions coupled with strong beliefs spill over into violence,” Ellison said.

"Rather than the commission’s usual approach of starting with a discussion, gathering input, resolution of intention, public hearings and proceeding deliberately to a consensus decision, taking action today seems to be the best option before us,” he added.

Commissioner Andres Haladay, who in 2015 proposed that the commission give the fountain a new name, said Wednesday he was conflicted about whether it should be removed altogether.

"I'm still equivocal on it," he said.

In their letter to the city commission, members of the American Indian Caucus in the Montana Legislature said such monuments have stood for segregation, secession and slavery.

The monument first gained significant public attention two years ago, after a man who had been photographed with the Confederate flag shot and killed nine people at a South Carolina church. At the time, Smith cautioned against "obliterating history." Commissioners instead decided to install a plaque to explain the origin of the fountain and the group that dedicated it. The plaque has not yet been installed.

Smith said the monument would be removed even if the signage were in place today. Officials said they have been working to perfect and condense the wording for the sign, which has contributed to the delay.

The plaque was to have acknowledged that the United Daughters of the Confederacy openly supported the Ku Klux Klan and its mission of white supremacy.

Alles said the first draft of the wording was so long, a billboard would have been needed to fit it all. Requirements of the Americans with Disability Act also contributed to the delay, he said.

Noonan said he wasn’t on the commission when the decision to install sign was made, but he is in support of the signage. He said that because that didn’t happen, the monument needs to be removed.

“Underneath it all is a history of racism,” he said, adding his concern that the fountain could be used as an excuse for violent acts. “At the history of this moment, that’s what these monuments have become.”

“I see the seriousness of it,” Noonan added.

Farris-Olsen also voiced safety concerns but said the racism issue is a much larger one.

“I think we have an obligation to take it down,” he said. “I wish we would have two years ago.”

Of all the citizens who voiced their views at Wednesday's meeting, a slight majority supported the removal of the fountain. One speaker called the fountain a “blight on the City of Helena.”  Another referred to the monument as a stain on the city.

A group of Helena-area legislators, some of whom spoke at the meeting, released a statement earlier in the day encouraging the council to remove the fountain. The letter was signed by Sens. Mary Caferro and Jill Cohenour, as well as Reps. Kim Abbott, Mary Ann Dunwell, Jenny Eck, Janet Ellis and Moffie Funk.

“White Supremacy, Neo-Nazism, and White Nationalism should not be accepted or supported in any way here in Helena.  Our city embraces diversity and pluralism,” they wrote.

“This fountain stands as a symbol of racism and slavery.  It simply has no place in our city.  Elected officials in cities and states in the east and southeast are removing similar statues and symbols and Helena should join them.”

A few asked if the monument could be rededicated or repurposed in some fashion.

“By removing the fountain, we’re erasing history,” said Paul Pacini, who serves on the Helena Citizens’ Council. Pacini said the monument could serve as a catalyst for further conversations for which residents could learn and grow. “We need to make a change,” he said.

Wilmot Collins, who is running against Smith for mayor, said he wanted to support a plaque but now believes removal is the right decision. He said it’s not about erasing the past but more a safety concern.

The ACLU of Montana and the Montana Racial Equity Project also supported the removal in a joint statement released Wednesday.

"This monument romanticizes one of the most dehumanizing, violent, and destructive periods in our history. It honors those who fought with the Confederacy to preserve slavery and willfully disregards the horrific legacies of the Confederacy, including lynchings, segregation, and the systemic oppression of Black Americans, Native Americans, and immigrants that continues to this day,” the statement reads. “We must ensure that each person who walks the streets and parks of our town feels welcome. We, as Helenans and Montanans, cannot expect to communicate such equality when a symbol of racism, inequality, and oppression stands prominently in Hill Park.”

Some asked for the fountain to be relocated and preserved, saying it belongs in a museum with extensive background information.

Barbara Kirkland said the fountain is a testament to grieving women and should remain in place.

“It isn’t that important. It’s a fountain,” Kirkland said.

“Why don’t we just get on with living?”

On Aug. 18 Helena's Confederate fountain was removed. Here's our coverage

On Aug. 18, 2017 the city of Helena removed a memorial to Confederate soldiers that had resided in a public park since 1916.

Helena’s memorial to Confederate soldiers, a granite fountain in Hill Park, will soon be accompanied by a plaque explaining it was part of a c…

The revised language for the Confederate fountain sign reads as follows:

When Helena's controversial Confederate fountain was removed from Hill Park last summer, there were no plans to install a new monument in its …

Jon Lovi calls for modifying the Confederate fountain in Helena's Hill Park and removing all references to the Confederacy.

Barbara Kirkland argues in favor of leaving the Confederate fountain the way it is during Wednesday's Helena City Commission meeting. 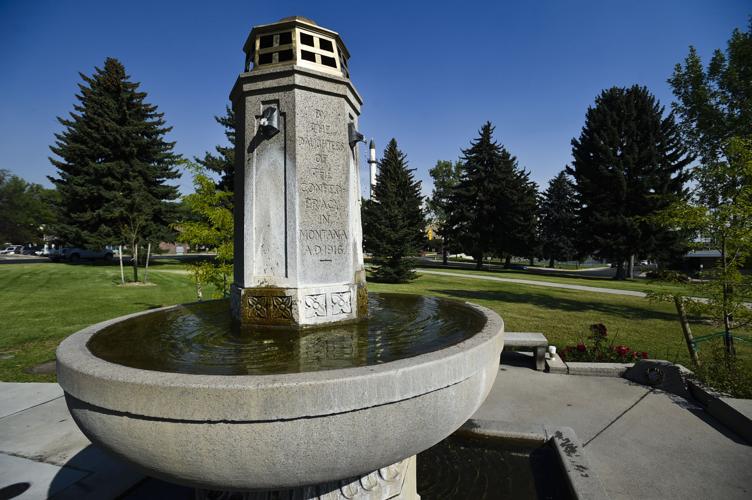 The Confederate Fountain at Hill Park in Helena will be taken down in accordance with Wednesday's directive from the Helena City Commission. 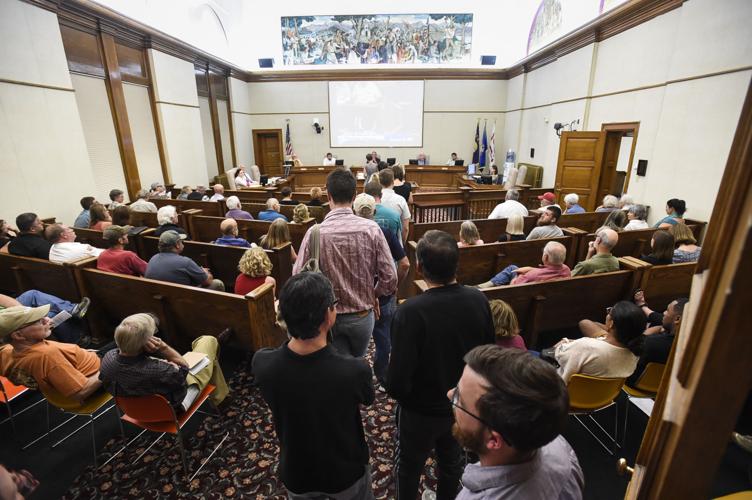 People wait in line to testify before the Helena City Commission Wednesday regarding the Confederate fountain in Hill Park.

City Commissioner Dan Ellison gives a statement early in Wednesday's meeting calling for the removal of the Confederate fountain at Hill Park.