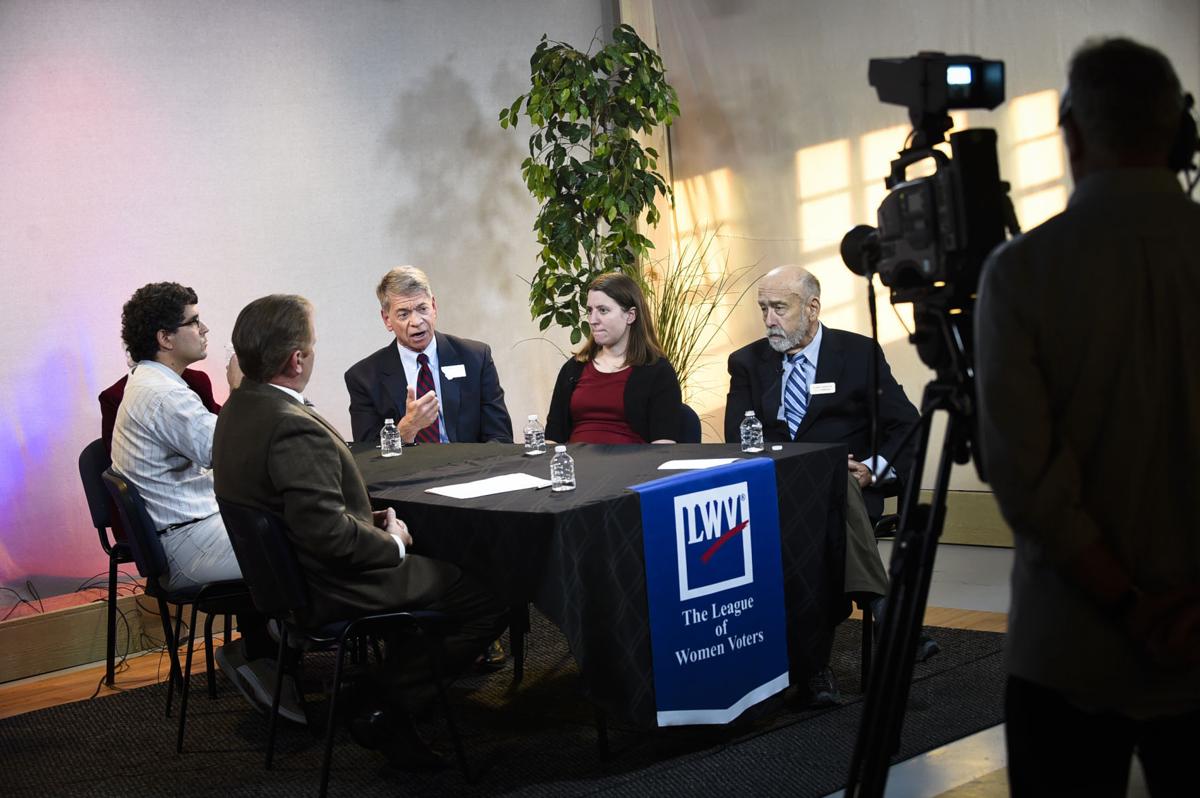 All the Helena City Commission candidates, except Justin Ailport, answer questions Monday afternoon during a candidate forum facilitated by the League of Women Voters at the Helena Civic Television studio. 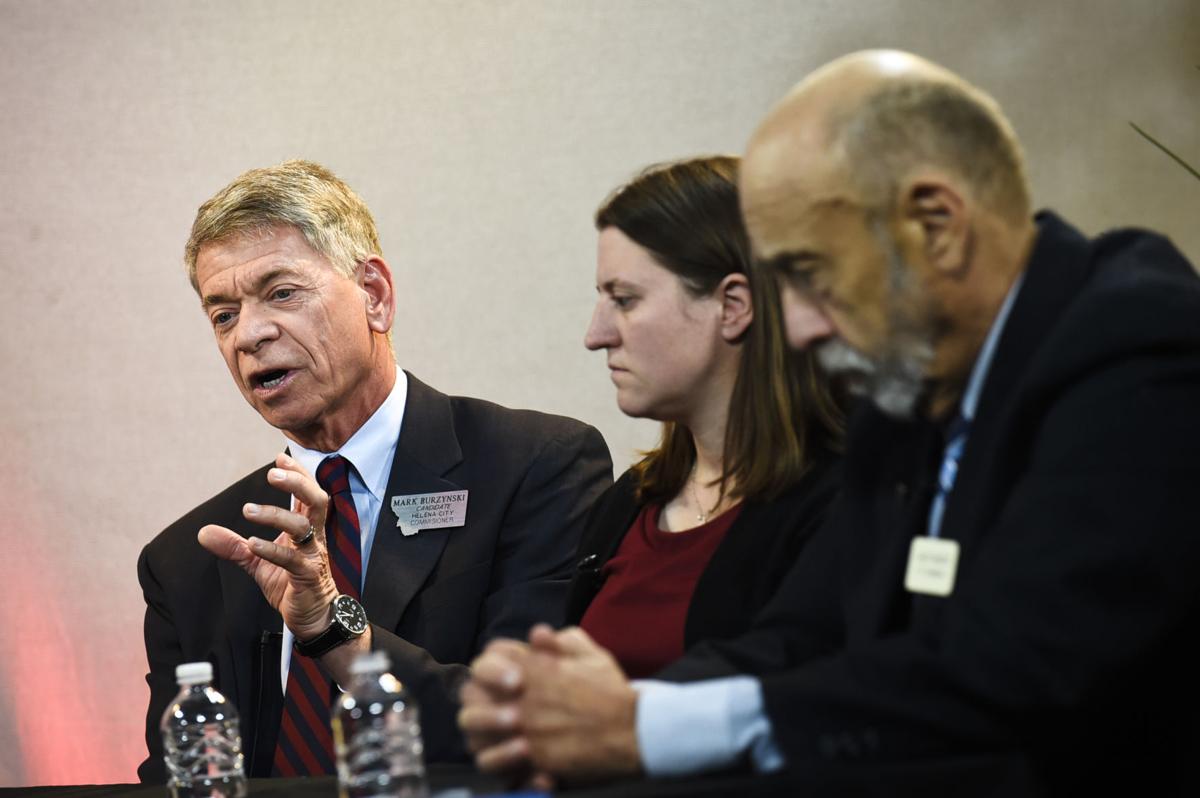 Helena City Commission candidate Mark A. Burzynski, left, answers a question Monday afternoon during a candidate forum facilitated by the League of Women Voters at the Helena Civic Television studio. 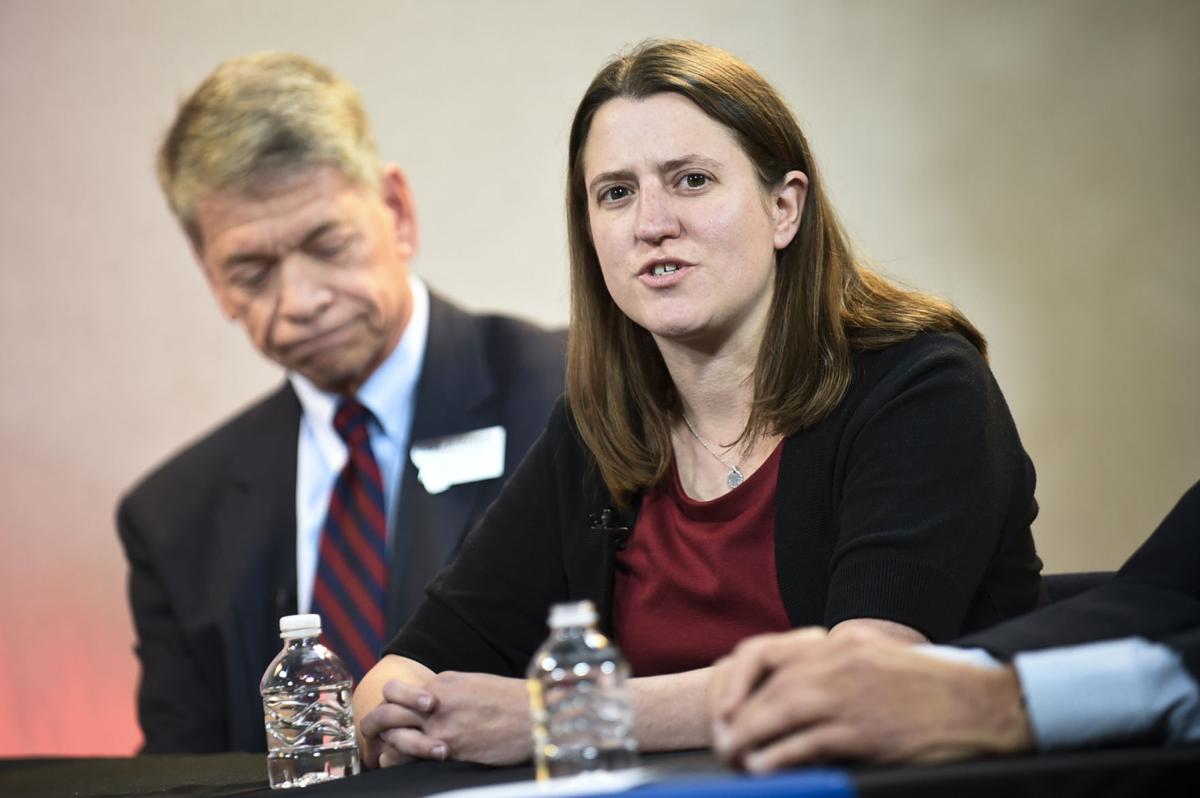 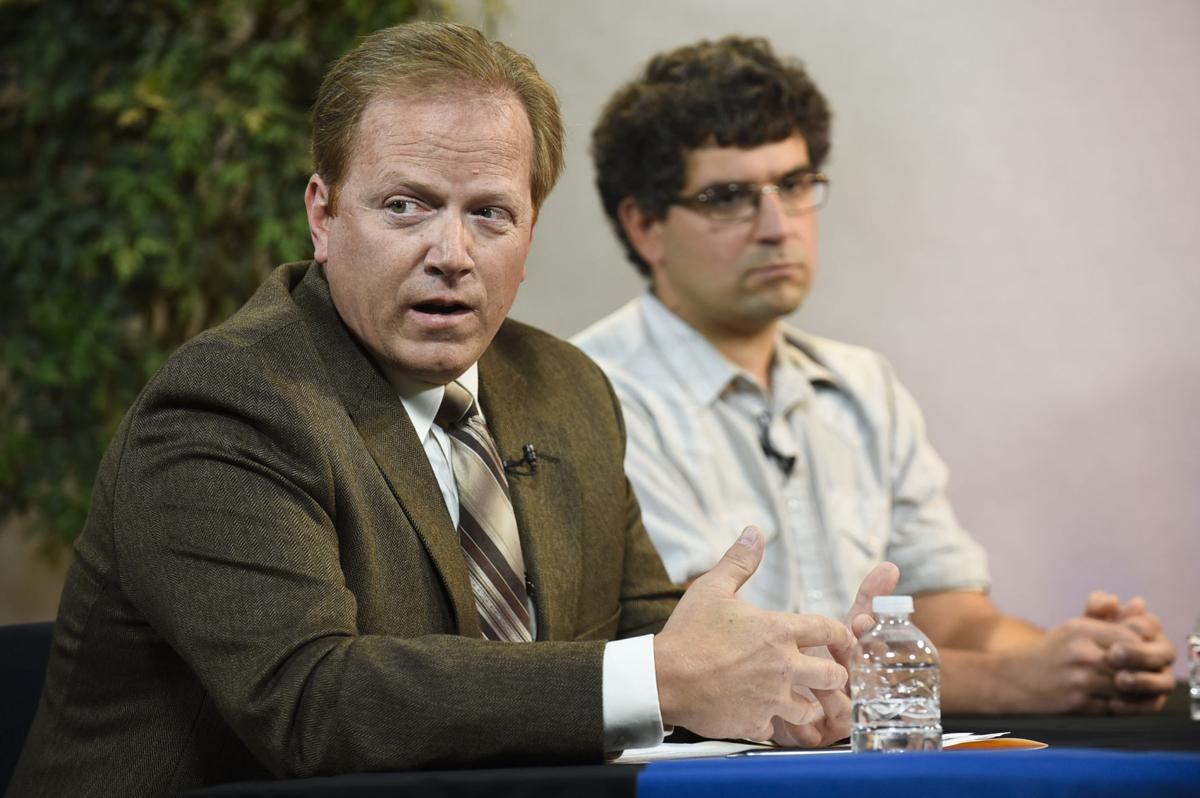 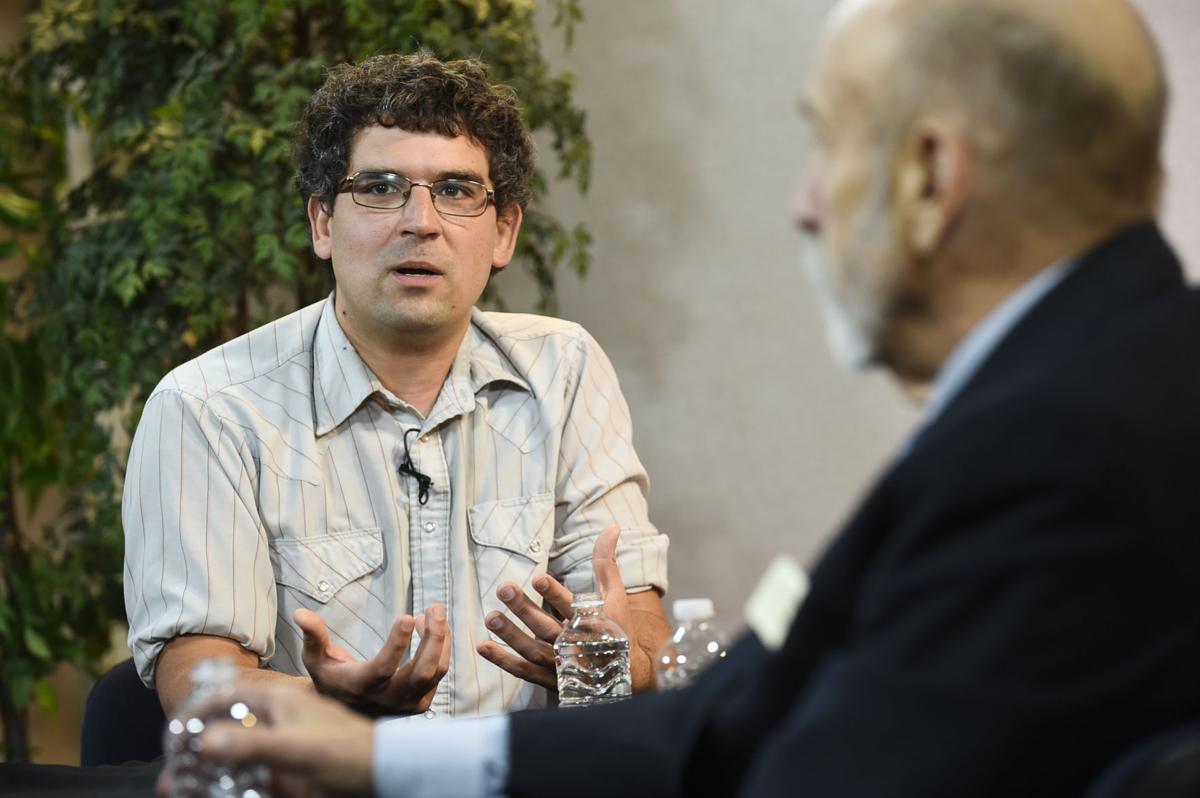 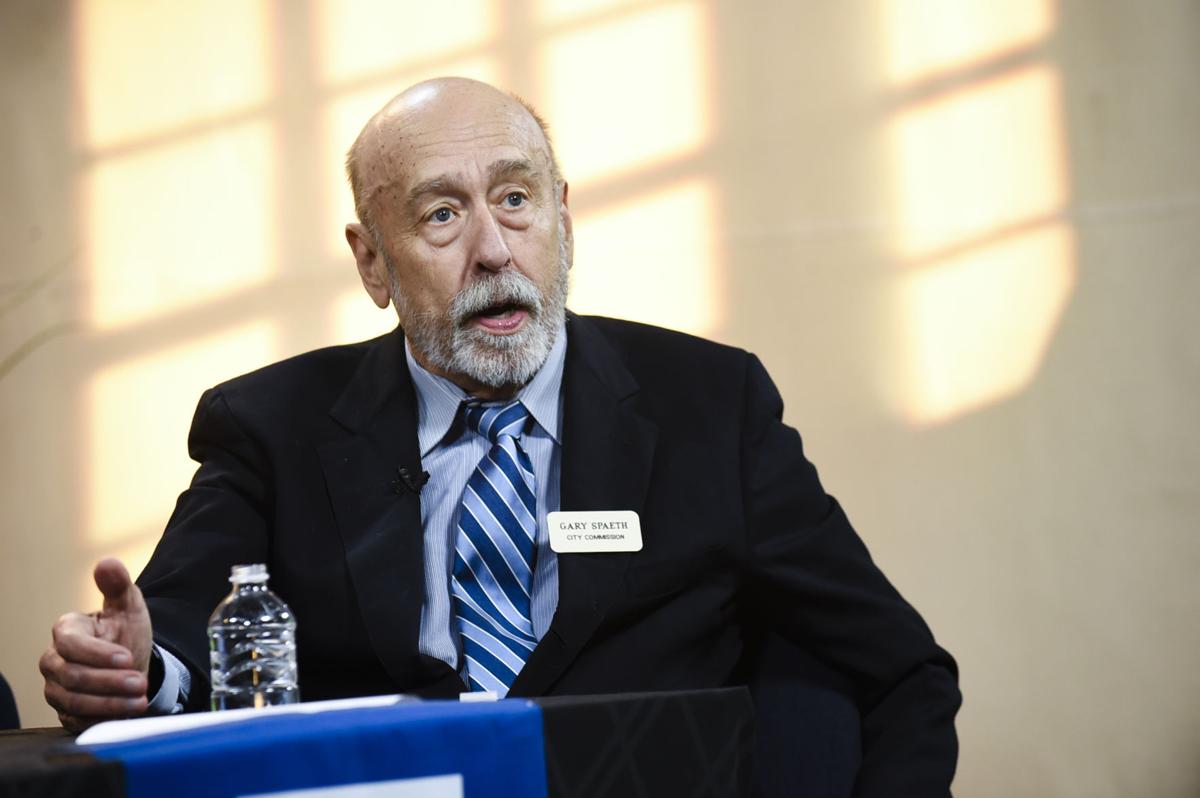 Candidates for Helena City Commission spoke Monday about why they are running for the position in addition to contentious local topics such as the Confederate fountain removed from Hill Park.

Five of the Helenans vying for the job met at the Helena Civic Television Studio Monday afternoon to take questions from Helena-area League of Women Voters board member Claudette Morton. The forum will be televised repeatedly this week. Candidates Mark A. Burzynski, Andres Haladay, Sean Logan, Heather K. O'Loughlin and Gary L. Spaeth participated in the meeting. The other candidate Justin Ailport, the development director for the Montana Democratic Party, was not able to attend.

Two seats on the city commission will be filled this year.

Haladay, who is currently on the commission, said his experience combined with his skills garnered at his day job as an attorney make him the best choice. Both positions require swift analysis, he said.

"You have to be able to take a great deal of information and synthesis it quickly," Haladay said, adding he has the most experience of those sitting at the table.

Logan, who retired as chief of the Helena Fire Department about a year ago, said his time as administrator for firefighters taught him the importance of infrastructure and collaboration.

"That was really a landmark in my career," he said.

As fire chief, Logan said he attended commission meetings regularly and has working knowledge of budgets.

Spaeth said he has the experience and imagination to be a productive commissioner. He retired as assistant chief counsel for the Department of Natural Resources and Conservation. He also served four terms in the state House, where he was appropriations chairman and majority whip, in addition to local boards.

O’Loughlin is the co-director of the Montana Budget and Policy Center, a non-profit organization focused on advancing policies to improve the lives of Montana families with low to moderate incomes. She said her devotion to public service and experience with budgeting puts her in front of the pack.

O'Loughlin said her main strengths are vision, action and collaboration.

Burzynski, a former chief financial officer for Blue Cross and Blue Shield of Montana, said he recently decided it was time to repay the community for what it has given his family.

"You do it because you want to serve," he said. "There are a lot of people serving us that make our quality of life improved."

When posed a question regarding the commission's involvement and discussion of state and national issues, the candidates' responses were mixed.

Logan said he has seen many commission conversations veer outside the role of the city and he said that time would be better used hammering out the essential functions locally. He said the city should take care of itself first and foremost. Logan referenced the increase of calls Helena firefighters respond to annually. That number has more than doubled since he first started with the HFD in 1996, he said.

Haladay said those conversations are necessary due to the impact of state and federal funding and policies on the city.

"You can see direct relationships," he said. As a commission, the members are willing to meet until the work is done even if it means discussions that last into the night. "We have time to do it all."

Burzynski said one issue right now is having the faith of tax payers.

"I think the taxpayers want the commission focus on things that impact them," he said. "I don't think that exists right now."

O'Loughlin said while state and federal budgets are interconnected with local issues, residents' concerns should remain in the forefront.

"We should be talking about what state policy decisions mean for this community," she said.

Spaeth agreed that Helena should be first.

"We should start out with Helena and consider the issues that impact Helena," he said.

"We really are reactive and not proactive," Spaeth added.

Morton asked each candidate what the most important issue in front of the commission is this year.

Haladay said continuing work on policies, in particular the issue of affordable housing. Helena remains relatively inexpensive but it is falling behind the curve, he said.

"It has to be thought of in a long-term goal," Haladay said.

Logan said economic revitalization is needed in order to advance the quelling of problems such as an overcrowded jail and issues with schooling.

Spaeth said the focus needs to be on garnering more businesses with good wages so that the city doesn't depend so much on state jobs.

"We have to have economic development," he said.

O'Loughlin said she opted to run because she wants to help with downtown development. She wants to partner with existing resources to create long-term visions for retail opportunities and housing in Downtown Helena.

Burzynski said Helena needs to become a better ambassador for itself in order to attract new businesses. He asked if the city is welcoming compared to competing municipalities such as Great Falls or Missoula.

"I don't think our reputation is very good," he said.

Morton brought up the admittedly hot-button issue of the removal of the Confederate fountain from Hill Park in August. The commission directed the city manager to extract the fountain during a meeting and it was removed within days. Morton asked more specifically if there should be a privately funded effort to replace the fountain with something representing Helena.

O'Loughlin said she's heard the public would have liked more input before a decision was made on the matter. She said she strongly supports a new landmark in its place.

Burzynski said he too heard from dismayed residents.

"The process was somewhat flawed," he said, adding the only way the fountain should be replaced would be through private funding.

Haladay said the local public arts committee has already been budgeted with roughly $12,000 for some sort of installation at Hill Park prior to the removal. Another group has been fundraising as well, he said.

"There is a process underway," Haladay said.

Logan said the fountain has been the most divisive issue he's seen in Helena.

Logan thought the agreement to put an interpretative sign on the fountain was the best decision for all involved. When the signage took too long and city officials took action, that caused a great separation within the community.

"It should be something that heals our community," he added.

Spaeth said he was concerned the fountain issue was not on that meeting's agenda.

"I'm not sure I would have done what they did," he said.

Case counts down, Hawaii to welcome back tourists

Case counts down, Hawaii to welcome back tourists

It’s been a year since Dr. Tom Weiner and St. Peter’s Health parted ways, launching a very intense public battle between the hospital and the …

ELKO, Nev. — A felon who served several years in prison for a 2010 shooting at a Las Vegas park has been arrested in Cascade as a suspect in a…

Helena city officials said they were open to discussing the fate of a displaced Confederate monument, after the leader of the group that donat…

Benefis says Helena facility will be about 60K square feet

A Benefis official said this week its new building on the former Capital Hill Mall site will be a 60,000-square-foot structure that will featu…

All the Helena City Commission candidates, except Justin Ailport, answer questions Monday afternoon during a candidate forum facilitated by the League of Women Voters at the Helena Civic Television studio.

Helena City Commission candidate Mark A. Burzynski, left, answers a question Monday afternoon during a candidate forum facilitated by the League of Women Voters at the Helena Civic Television studio.