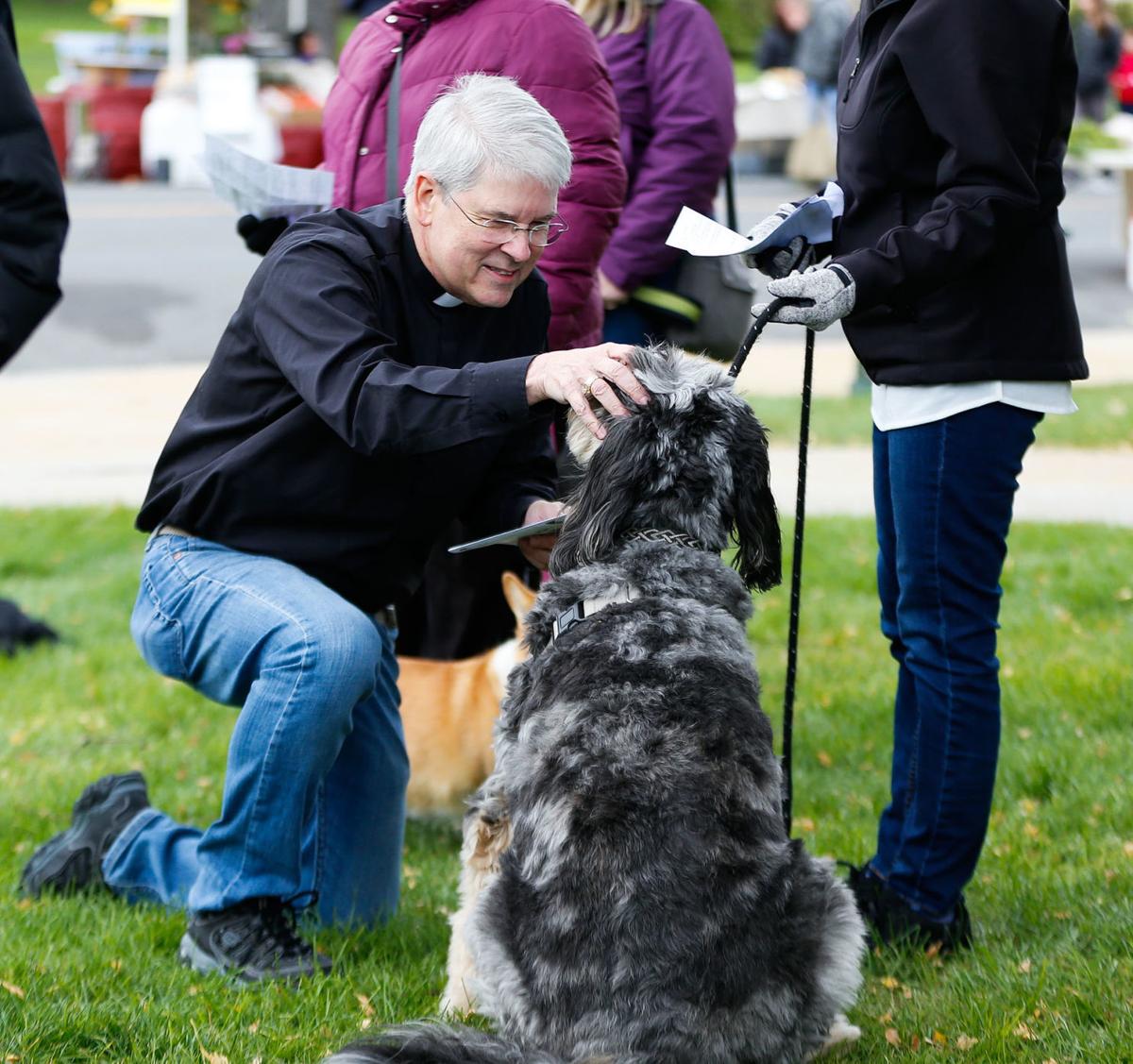 The Very Reverend Scott Anderson blesses Angus during Saturday’s Blessing of the Animals at Hill Park. 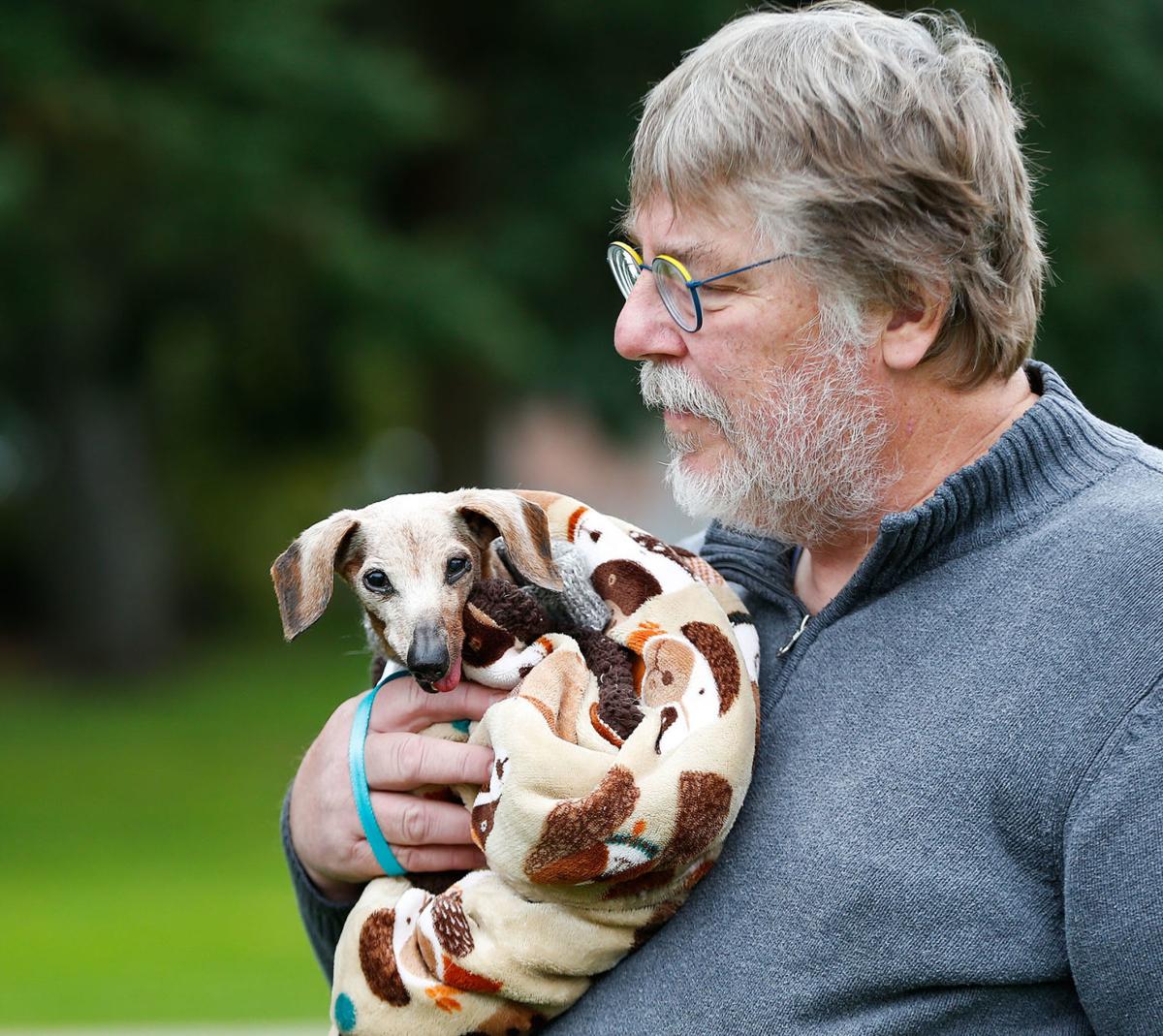 Snug in a blanket, 18-year-old Bandy made the trip to Hill Park with Jon Axline for Saturday’s Blessing of the Animals. 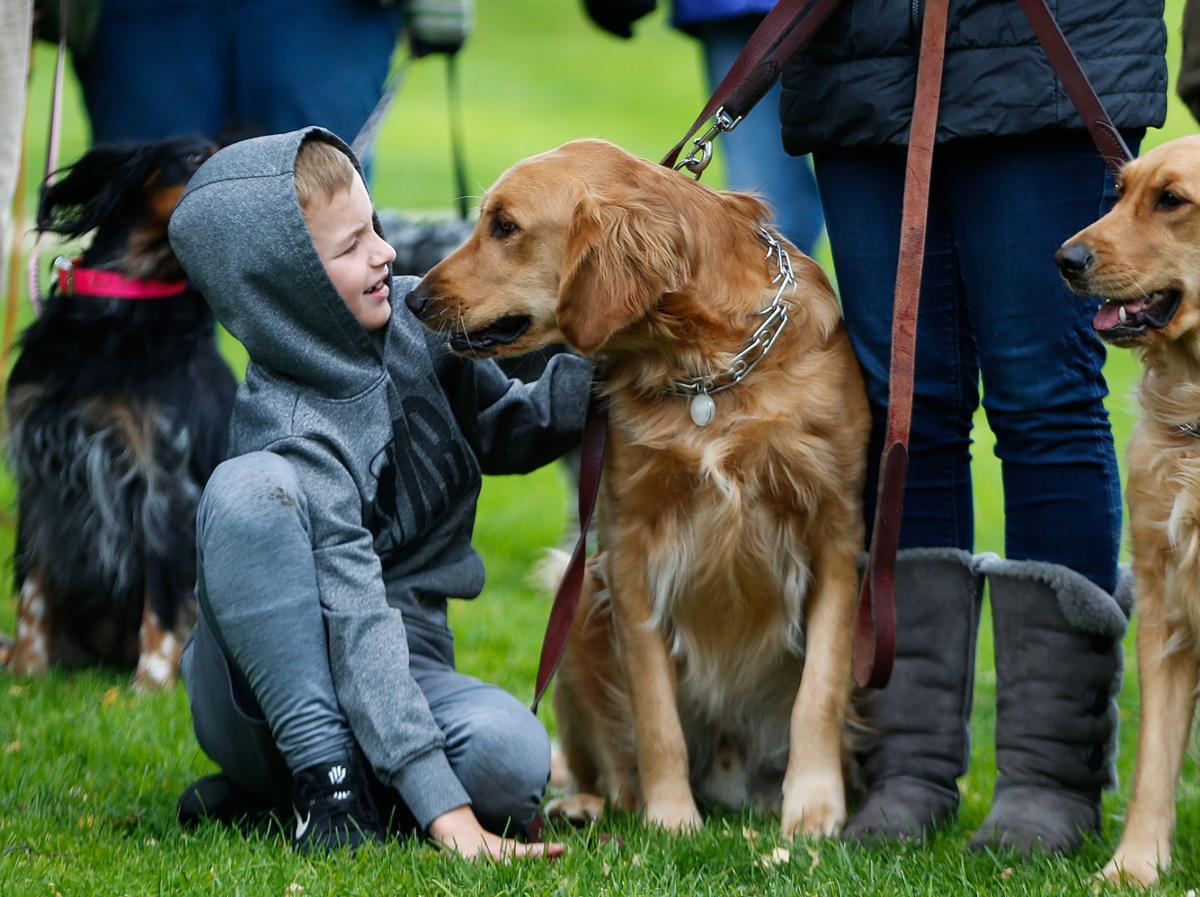 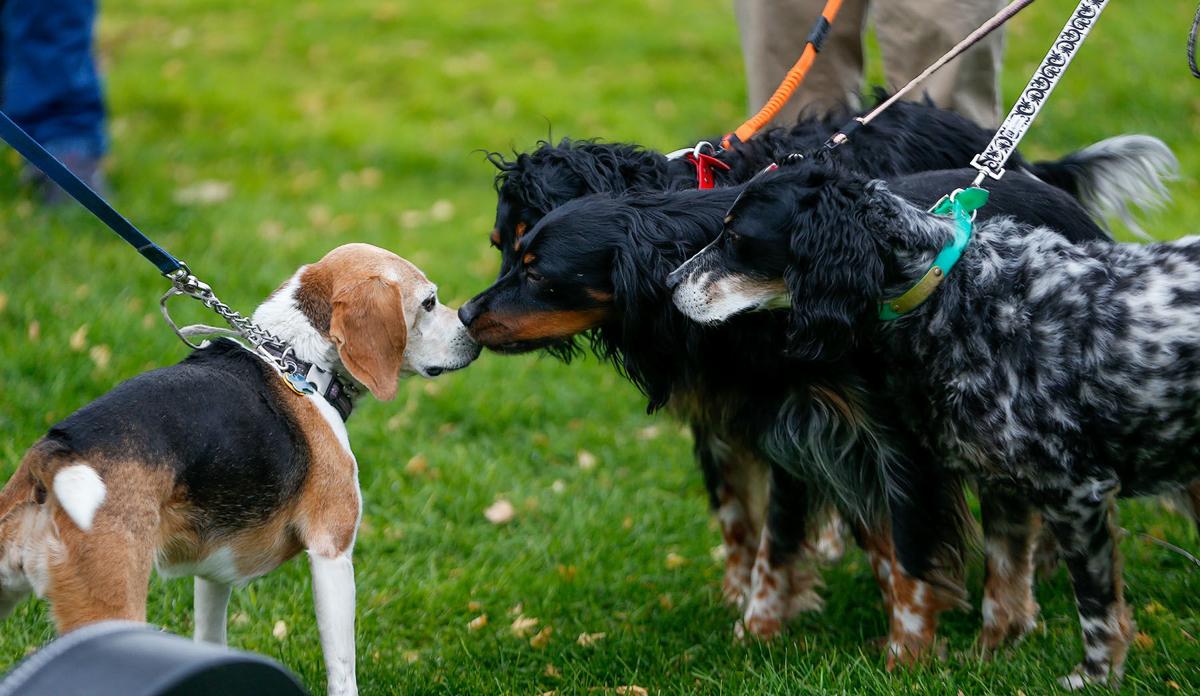 Meet and greet time at Saturday’s Blessing of the Animals at Hill Park. 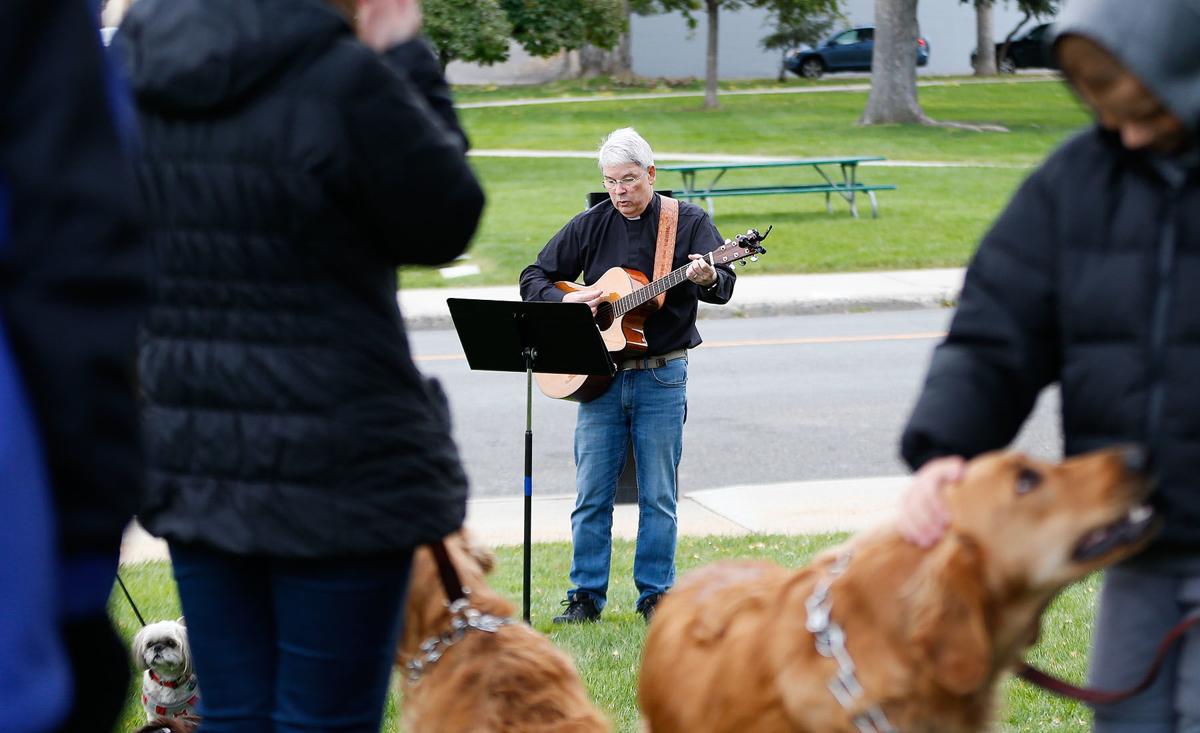 The Very Reverend Scott Anderson sang a hymn before he blessed the dogs Saturday. 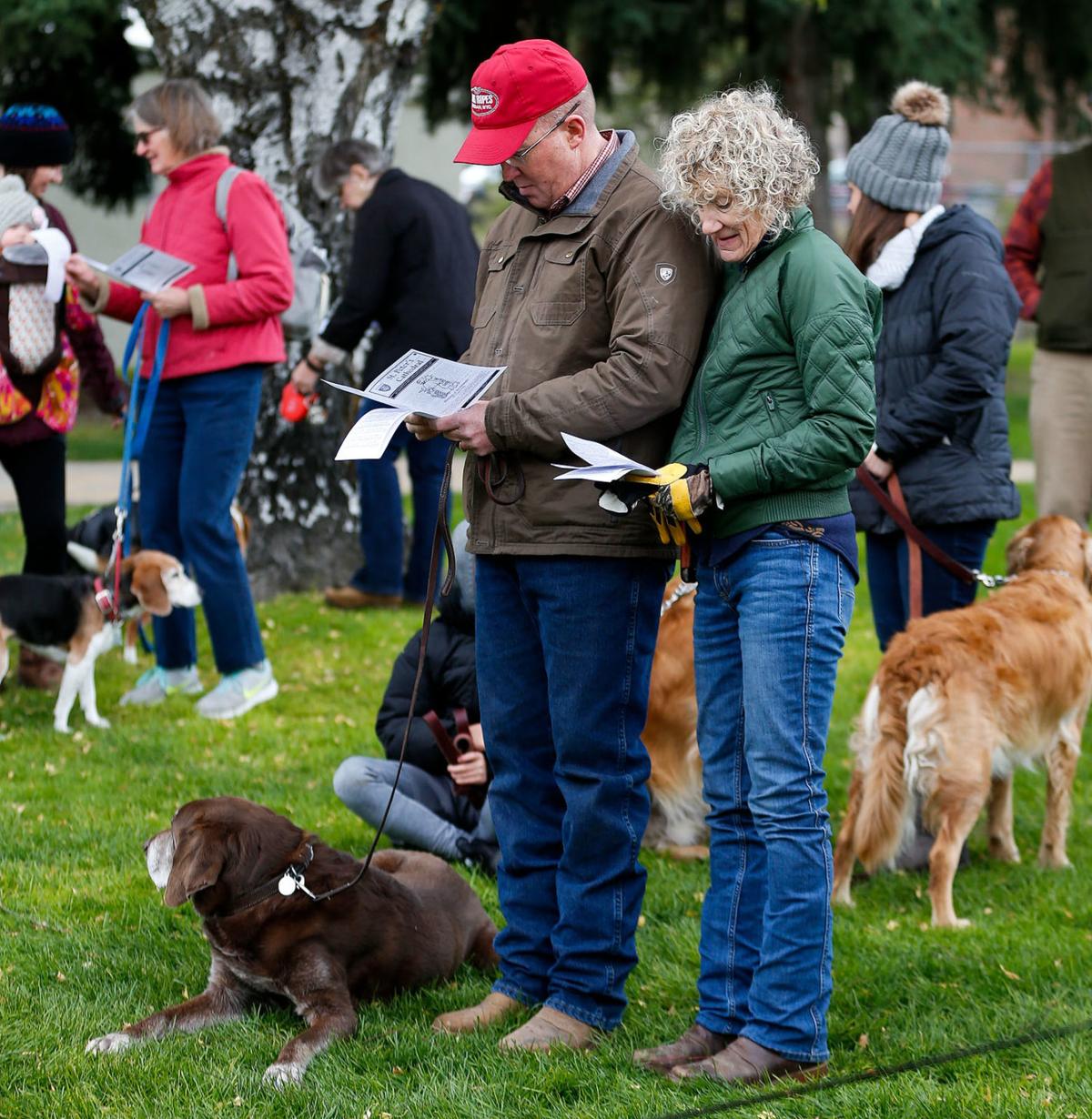 Dog owners gathered at Hill Park Saturday for the Blessing of the Animals.

The brisk October winds whipped through a crowd of people gathered together alongside furry companions. There were bugling beagles, smiling golden retrievers, wiggly corgis and stoic German shepherds. Dogs tall and small, leashed and held, harnessed and bundled in coats waited patiently beside their owners for a special ceremony to begin.

“It’s a chance to say thank you for their presence in our lives in a formal and official way,” said Anderson.

“It’s a great opportunity to recognize the pets in our lives and celebrate them,” said Kelsee Dalton Watts, executive director for LCHS.

The ceremony opened with Anderson playing the hymn, “Morning Has Broken,” on the guitar while the crowd sang along. Seeming to be lulled by the music, all of the dogs quietly sat and listened. The hymn was followed by a reading from the Book of Genesis that described the creation of the living creatures on the earth.

Anderson then led a brief sermon explaining the significance behind St. Francis of Assisi and the blessing of animals ceremony. He shared that St. Francis lived in Italy in the 12th Century. He was a Catholic friar who gave up a life of wealth to live a life of poverty. Traditionally, St. Francis is recognized worldwide on Oct. 4 for his great affinity for all living creatures and the natural world.

“When Francis spoke, everyone listened, including the animals,” said Anderson. “He told the animals that Jesus loved them too.”

Next came the actual blessing of the animals. One by one, Anderson went to each dog in the crowd, knelt down and stroked their heads as he said, “Bless, oh lord (name of the animal) and fill the hearts of its owners with thanksgiving for its being.”

Among the pets blessed were three dogs from LCHS looking for their forever homes. According to Rebecca Howard, dog program coordinator for the Lewis and Clark Humane Society, a previous adopter and parishioner at St. Peter’s initially approached the shelter about partnering for the event. Howard explained that Anderson visited the shelter on St. Francis day in 2018 and this past Friday for a private blessing of all the animals and the LCHS staff.

“These pets are looking for a home and their current life is in a state of turmoil,” said Anderson. “It’s important that they aren’t forgotten.”

“It’s really sweet they thought of us,” said Dalton Watts. “Anytime we can partner with the community and get prayers, blessings, or positive vibes for our animals, we’re going to accept it.”

After a final blessing and words of “alleluia,” the ceremony concluded. Several people approached Anderson afterwards to thank him for taking the time to bless their animals and to include the LCHS as well.

“Any person who has had a bond with an animal knows that it is spiritual—it’s a deep connection and relationship,” said Dalton Watts. “It’s a blessing to have animals.”

After about eight weeks with no new confirmed cases of COVID-19 in Lewis and Clark County, county health officials reported two new cases of t…

A 26-year-old Helena woman was arrested Thursday on suspicion of stabbing her boyfriend.

Montana has fared better than similar states when it comes to growth in cases of the novel coronavirus.

From Saturday to Sunday the state added 10 new COVID-19 cases.

The Very Reverend Scott Anderson blesses Angus during Saturday’s Blessing of the Animals at Hill Park.

Snug in a blanket, 18-year-old Bandy made the trip to Hill Park with Jon Axline for Saturday’s Blessing of the Animals.

Meet and greet time at Saturday’s Blessing of the Animals at Hill Park.

The Very Reverend Scott Anderson sang a hymn before he blessed the dogs Saturday.

Dog owners gathered at Hill Park Saturday for the Blessing of the Animals.