Texans vs. Lions: Follow the latest scores and update from Thanksgiving day football

'C' you later, 'H': Mount Helena letter gets a mysterious makeover
3 comments
Share this
{{featured_button_text}}
1 of 4 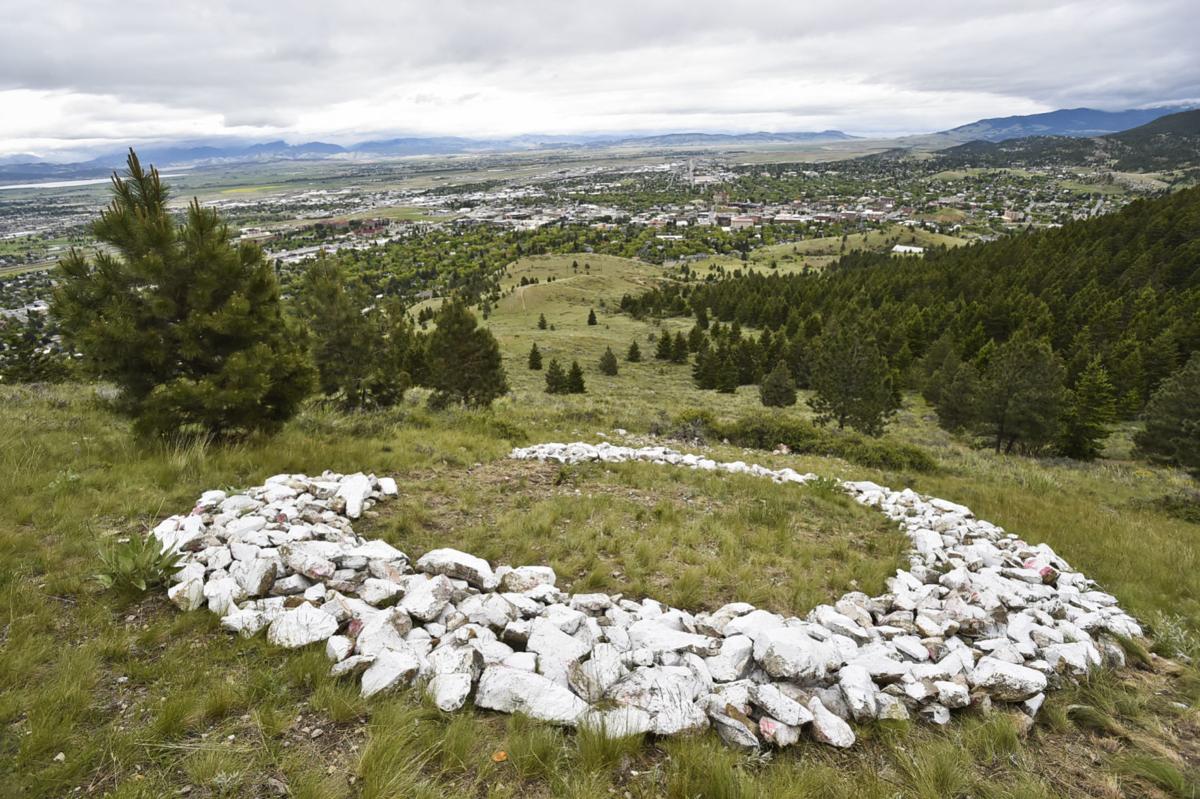 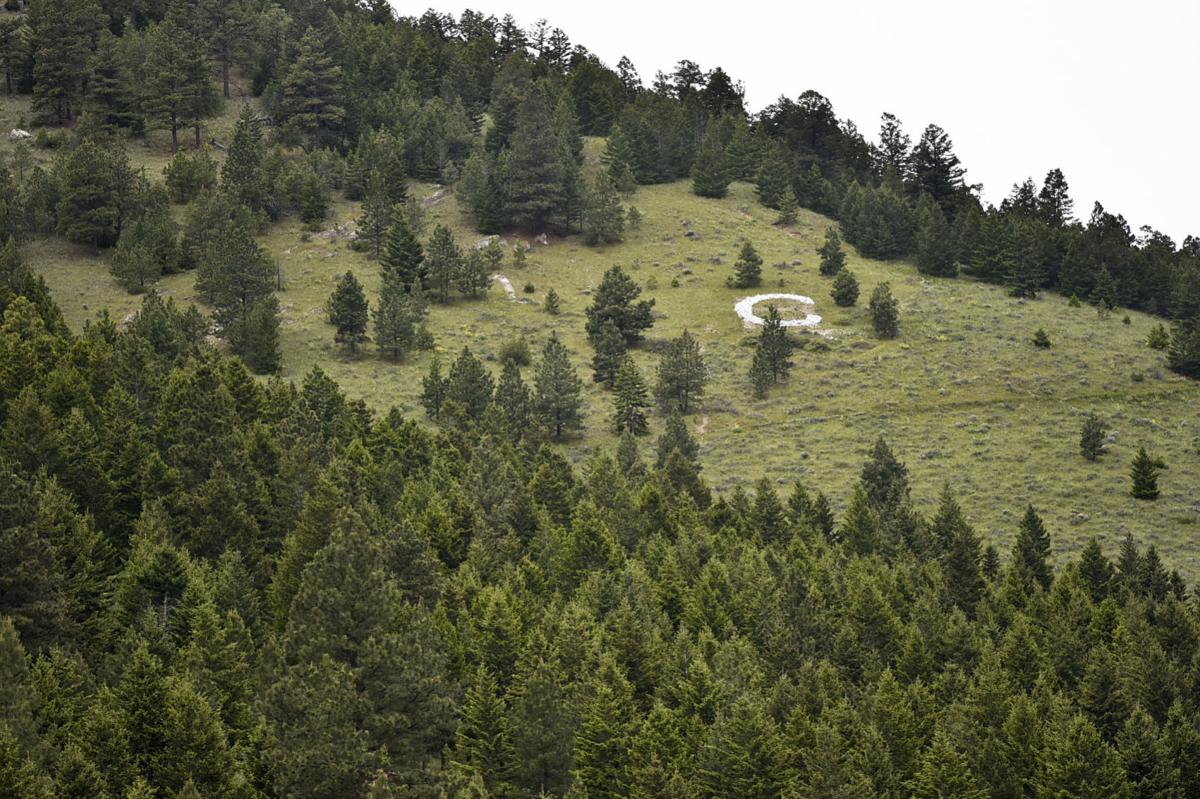 Mount Helena's "H" is now a "C" after the graduation weekend. 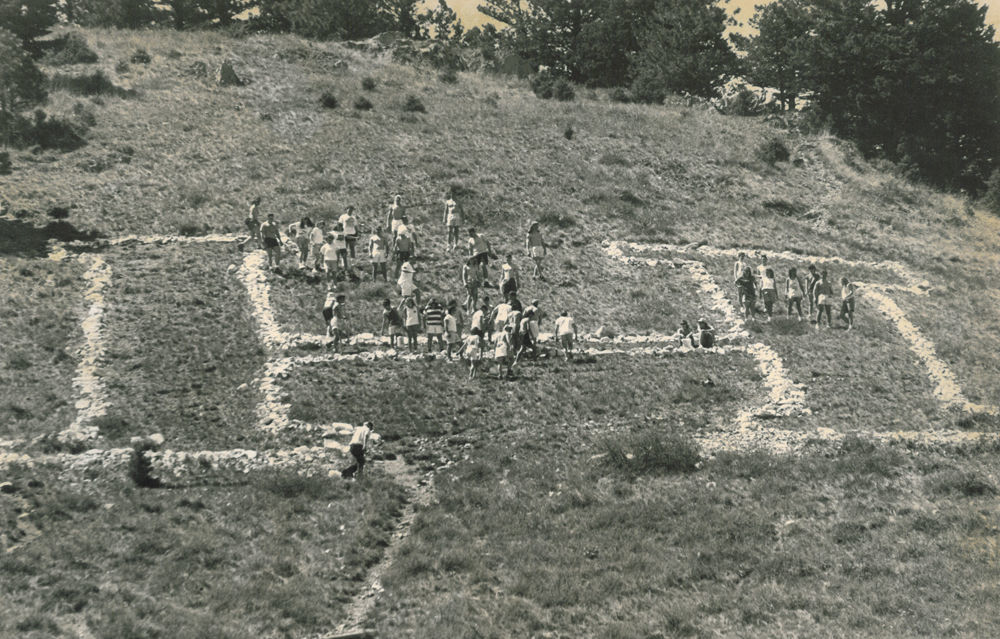 The Helena High H Club works to renovate the H on Mount Helena in this May 10, 1990 file photo. 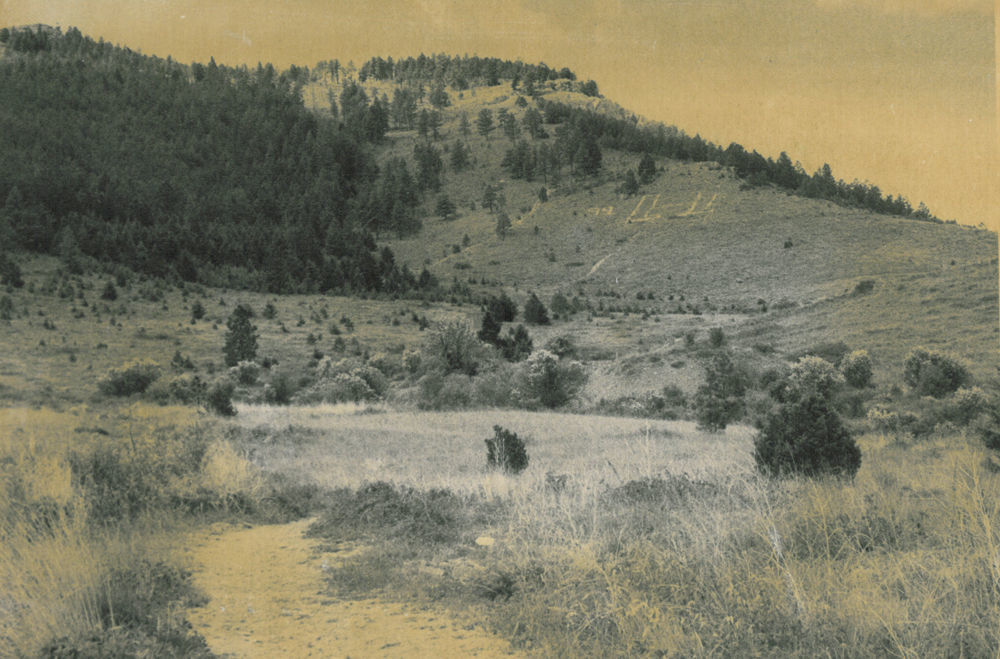 The H can be seen on Mount Helena in this undated file photo.

The hillside letter towering over Helena on the side of Mount Helena mysteriously changed from an "H" to a "C" during graduation weekend.

Brad Langsather, opens lands manager for the city of Helena, said this kind of mountain makeover is not an uncommon prank, and the city always changes the letter back to an "H".

While Capital High School students have been known to make the change in past years as part of a friendly rivalry with Helena High School, CHS Principal Brett Zanto couldn't say whether it was the handiwork of his school's senior class this time around.

The "H" has been on the mountain since 1924 and was formerly managed by the Helena High School H-Club.

In 1966, the staff from the Helena High Vigilante yearbook pulled off an epic photographic feat resulting in this double exposure that graced the cover of the 1967 yearbook. According to Helena as She Was, the project took three photographers positioned throughout town and a small army of students and advisers to pull off the double exposure.

In 1986, Bob Batch tried to rekindle the annual tradition of lighting up the "H" with 400 flares. That tradition went dormant in 1973.

At some point the tradition switched from letters to numbers celebrating the year of the graduating class. In 1996 the numbers got flipped.

In 2015, it was actually a group of Capital High Seniors who touched up the crumbling 'H.'

The lettering has drawn a lot of conversation in the IR's opinion pages over the years as well.

In the late 1990s and early 2000s there was a lot of debate about keeping the "H," adding a "C," or even getting rid of the lettering altogether.

Out for a walk

Celebrating the first day of summer

View of the H

Montana's legislative leaders met Tuesday by video conference to debate the return of in-person committee meetings and how lawmakers might hold a remote legislative session next year.

Mount Helena's "H" is now a "C" after the graduation weekend.

The Helena High H Club works to renovate the H on Mount Helena in this May 10, 1990 file photo.

The H can be seen on Mount Helena in this undated file photo. 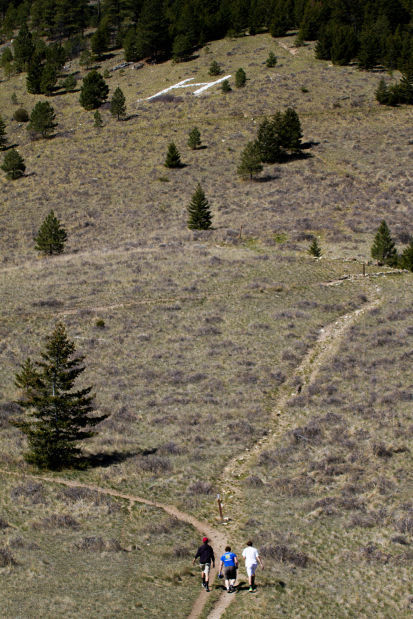 Capital High senior class officials Jay Deaton, Justin Dinghman and Scotty Tilton climb up to retrieve waste from the freshly painted 'H' on Mount Helena Friday after a group of Capital High seniors rehabilitated the fading letter on the mountainside. 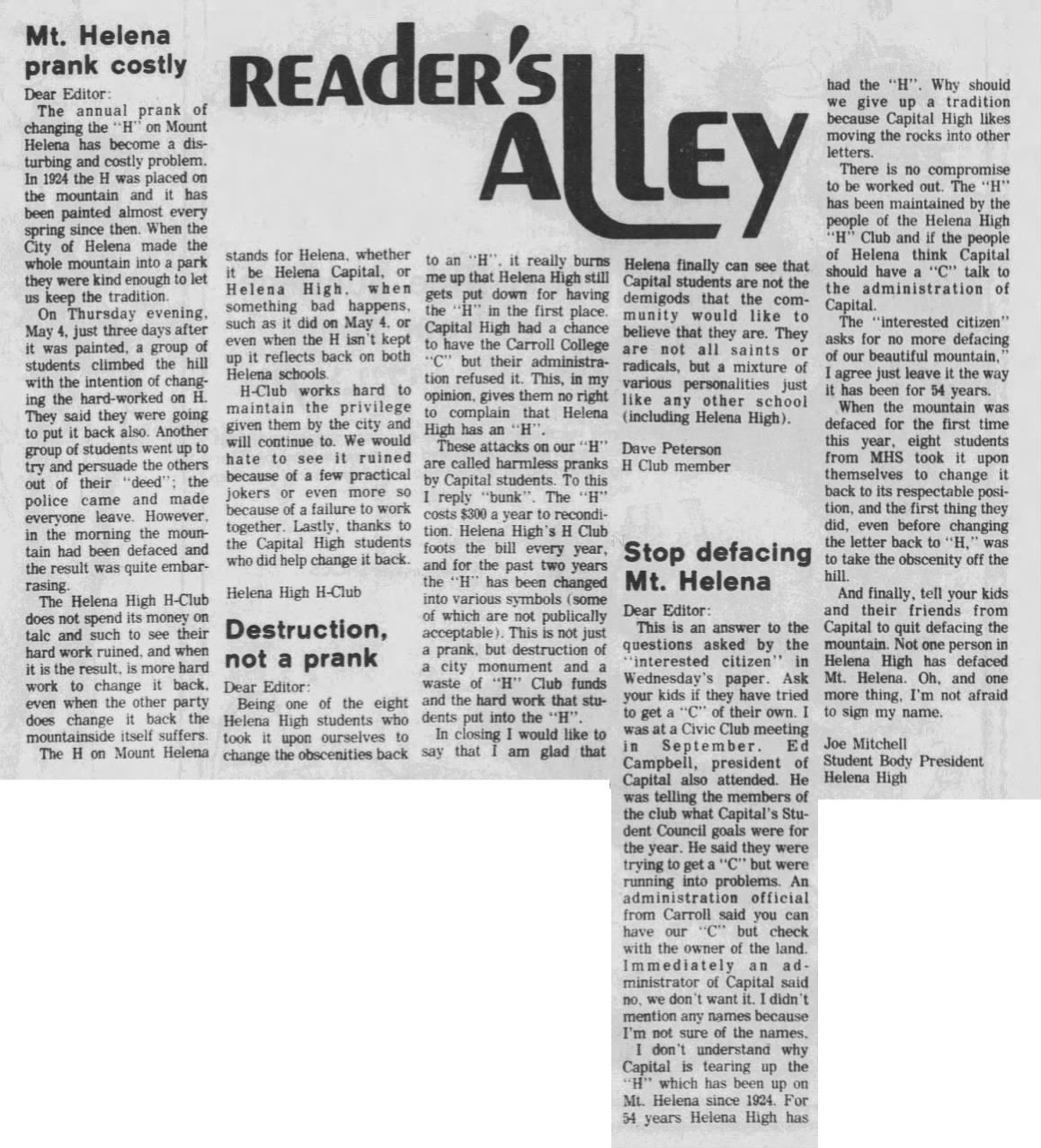 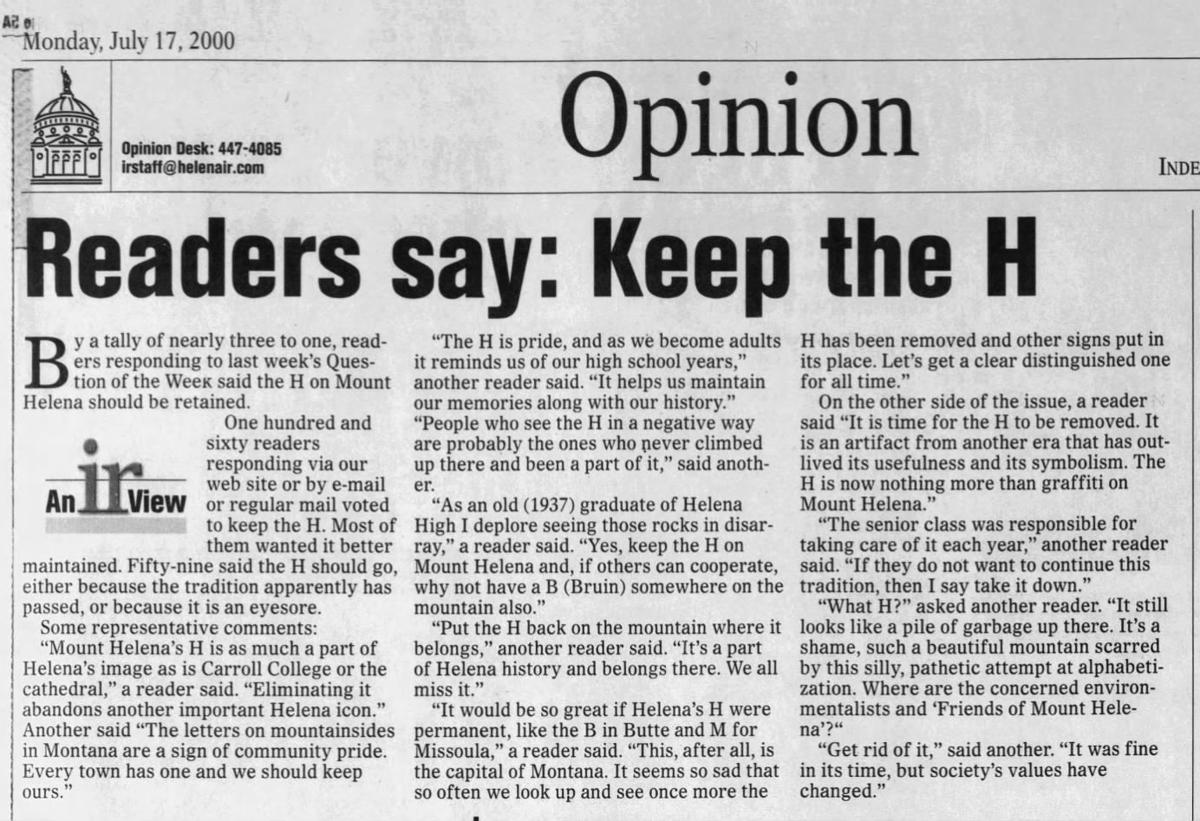 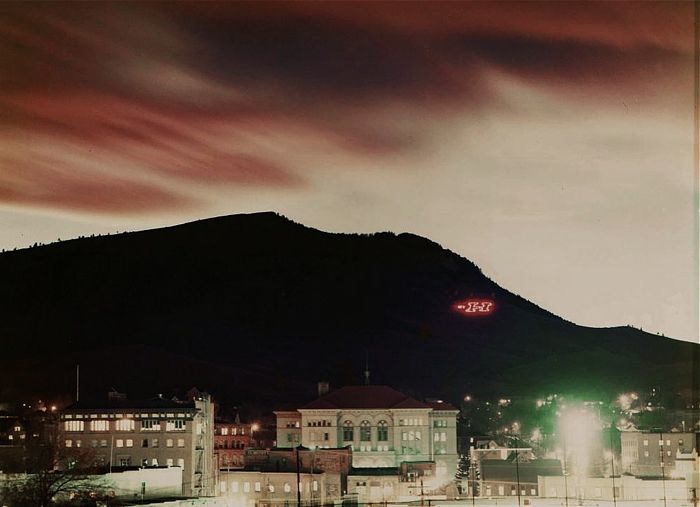 This double-exposure photo, taken in the autumn of 1966 for the cover of the 1967 HHS Vigilante yearbook, was quite a feat by the yearbook staff.