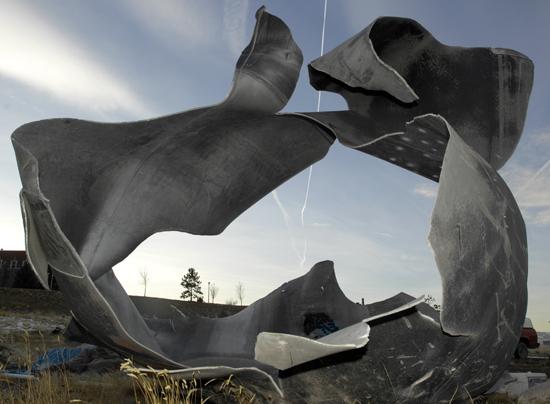 There are still remnants of the wrecked train on the Carroll College campus. Eliza Wiley IR photo editor 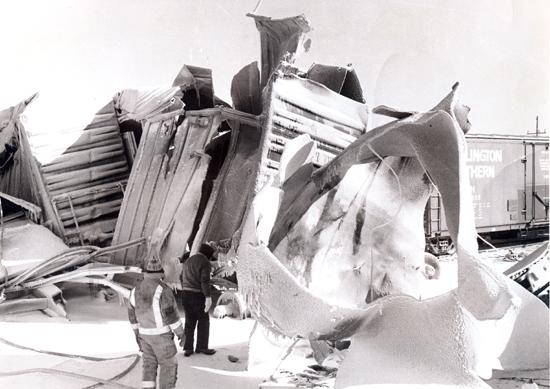 IR file photo This photo from 20 years ago shows the scene of the wreck the day after the explosion. 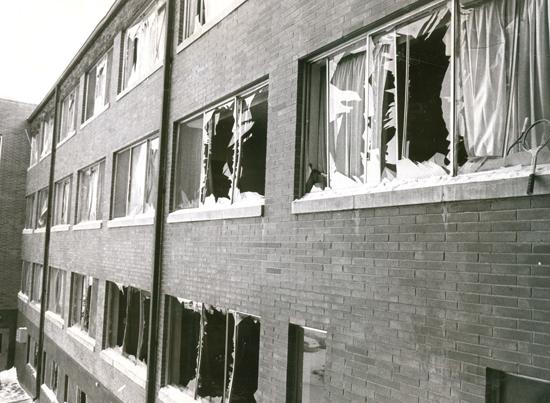 IR file photo This photo from Feb. 2, 1989, shows the effect of the runaway-train explosion on the windows of the women’s dorm at Carroll College.
ANGELA BRANDT Independent Record - 02/02/2009

J.R. Feucht trudged through icy slush laced with unknown chemicals at the site of the explosion. Unsure of what he was wading through, he gazed fixedly down at his rubber boots to see if they were dissolving.

Feucht and his fellow Helena firefighters walked up to the wrecked train cars in order to get numbers and identify what it was they were stomping through and learn what was in the other 40-something containers.

The scene was 20 years ago today.

"It was eerie, surrealistic and cold," Feucht recalled.

In the wee hours of the morning, a 48-car runaway freight train slammed into a parked train engine, setting off an explosion. Windows were blasted out up to three miles away from the impact near Carroll College. Most of the city lost power and residents were forced to evacuate in subzero weather.

"I think that's the coldest I've ever been in my life," Feucht said of the minus 28 degree air, which came with a wind chill factor of minus 75.

The wreck occurred when engineers traveling west toward Mullan Pass opted to switch the lead engine of a Montana Rail Link train because it lacked a working heater. In the process, the rest of the train began rolling and kept going until it crashed in Helena.

A tank carrying isopropyl alcohol caught fire, sparking an explosion in an adjacent tank of hydrogen peroxide. No major injuries were reported.

Feucht, who is now assistant fire chief of operations, woke up that morning to a strange noise in the eastside firehouse. He came to find that the hum was coming from the emergency generator, which had kicked on after the power went out. Feucht went to one of the fire trucks and clicked on the radio to hear an ambulance being dispatched to investigate an explosion near Carroll College.

Helena firefighter Bob Fearon was sleeping at the Civic Center firehouse when he was awoken by the blast. He initially thought it was an earthquake.

When arriving on scene, Fearon said he was surprised by the utter lack of chaos.

"I don't remember a lot of the mass hysteria you would imagine. There was more of a shock of 'what happened?' " he explained.

"We all thought it would have been a lot worse. We walked into potentially a ticking time bomb," Fearon added.

While responders were relieved the incident wasn't more of a disaster, they were struggling with the frigid weather. When they attempted to put out the flames from the explosion with water, it would freeze. The moisture from their facemasks would fog up and form ice, Feucht said.

"We literally groped along blindly. I've never seen equipment or people freeze up like that," he said.

Along with most other Helenans, Lewis and Clark County Disaster and Emergency Services Coordinator Paul Spengler also was in bed at about 5 a.m. when the wreck occurred.

Spengler, who was within a mile of the explosion, awoke but thought what he heard was a power substation blowing up in the extreme cold. He rolled over and went back to sleep, but soon received a call from the dispatch center telling him about the train.

Ed Noonan, who was resident director for two of Carroll College's dorms, said St. Charles Hall shook when the trains hit. Many of the windows in the women's dorm -- Guadalupe Hall -- were blown out.

The students were sheltered at the National Guard Armory, which still had heat. Noonan said he was in such shock that when he went to his gym to shower later that afternoon he realized he still had his pajamas on underneath his clothes and winter coat.

"In the end, it was more of an adventure than a tragedy," he said.

Feucht agreed, adding that it was a blessing no one was seriously injured or killed.

"It was definitely a time in history and one of the highlights of my career," he said.

A 59-year-old Helena Valley man died Tuesday after attempting to get out of his idling truck as it rolled forward.

A 43-year-old man from Keene, New Hampshire, was arrested in Helena on suspicion of having sexual intercourse with a girl less than 16 years old.

After failing to meet previously set goals for waste reduction, the city of Helena is once again aiming high.

There are still remnants of the wrecked train on the Carroll College campus. Eliza Wiley IR photo editor

IR file photo This photo from 20 years ago shows the scene of the wreck the day after the explosion.

IR file photo This photo from Feb. 2, 1989, shows the effect of the runaway-train explosion on the windows of the women’s dorm at Carroll College.
© Copyright 2021 Helena Independent Record, 2222 Washington St. Helena, MT | Terms of Use | Privacy Policy
Powered by BLOX Content Management System from TownNews.com.
You don't have any notifications.