When Lana Zellner and her husband — an architect and a software developer, respectively — moved to Philipsburg from New York City five years ago seeking a quieter place to call home, they joined the ranks of Montana’s remote workers.

In doing so, they brought their professional incomes into a rural Montana community that has long been hungry for good jobs. The Philipsburg Chamber of Commerce, they discovered after they arrived, had even produced a brochure aimed at attracting remote workers like them.

Zellner and her husband liked the town, with its restaurants, brewery and nearby ski area. But a year later, they had moved on — in part, she said, because of how hard it was to travel for business.

Her work, she said, involved managing projects all over the globe, but her firm preferred to operate through face-to-face meetings in New York City. That meant cross-country flights — “nightmare” commutes that often started with leaving Philipsburg in the wee hours to catch a 6 a.m. flight out of Missoula, more than an hour away, before shuttling through a layover in Minneapolis or Salt Lake City.

“They would have liked for me to be out in New York more regularly,” she said. “But I didn’t want to have to drive to the airport every two weeks.”

Zellner’s experience underscores what economists and civic boosters alike say is a key piece of the economic development puzzle in rural Montana communities: The access that well-connected airports give residents to the rest of the world.

“In spite of the internet access, we still need to see each other face-to-face,” said Ray Rasker, executive director of Headwaters Economics in Bozeman. “And that’s what airports represent.”

While the U.S. Department of Transportation’s Essential Air Service program subsidizes flights from seven remote Montana towns and cities to ensure they stay connected, it’s no secret that residents in broad swaths of Big Sky Country have long drives between their homes and flights.

A Long Streets analysis indicates that 29 Montana towns of at least 400 residents are more than an hour’s drive from a commercial airport. Another 24 are more than an hour from major airports in Billings, Bozeman or other travel hubs that offer direct flights to at least five or more different destinations. 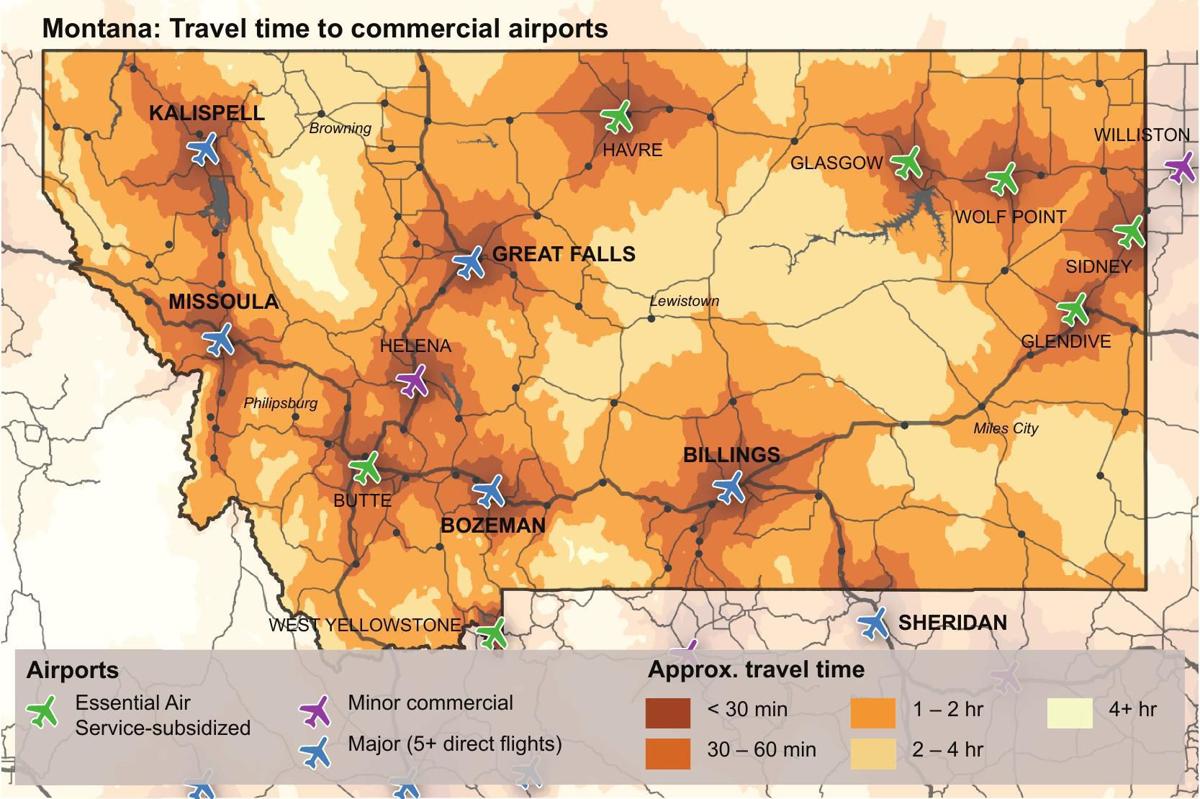 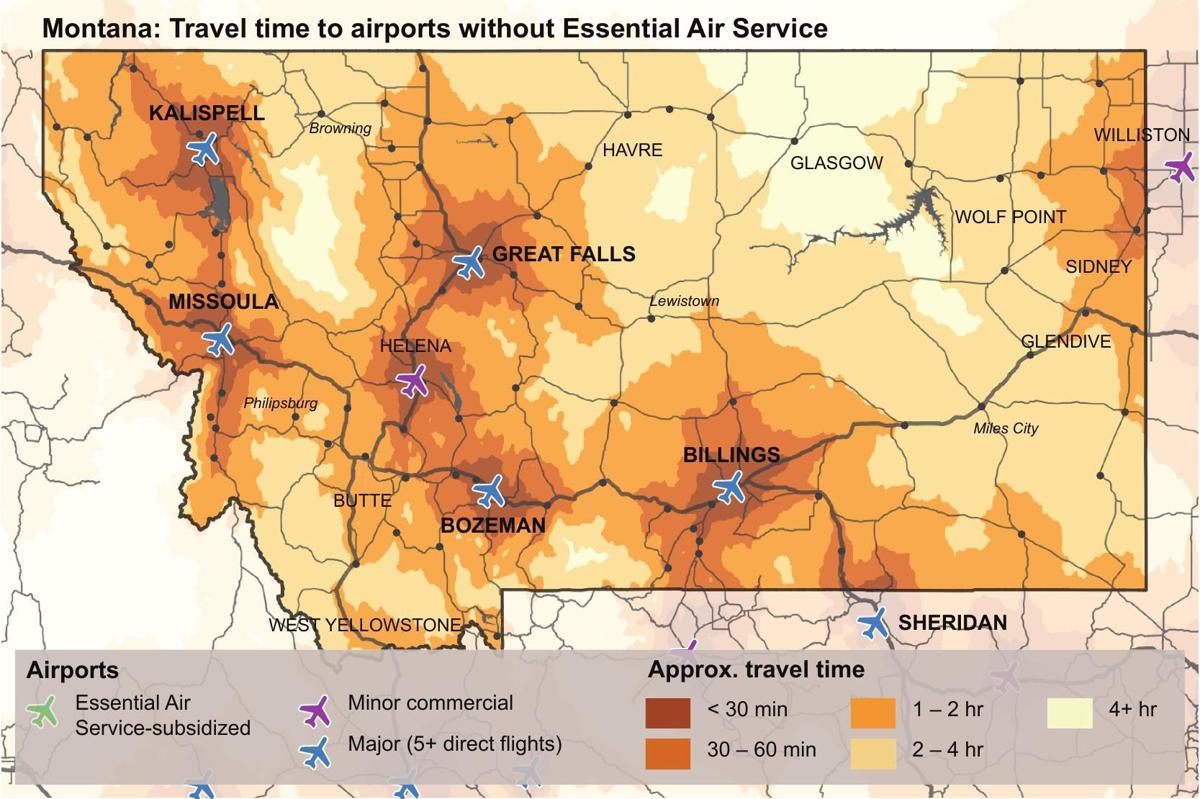 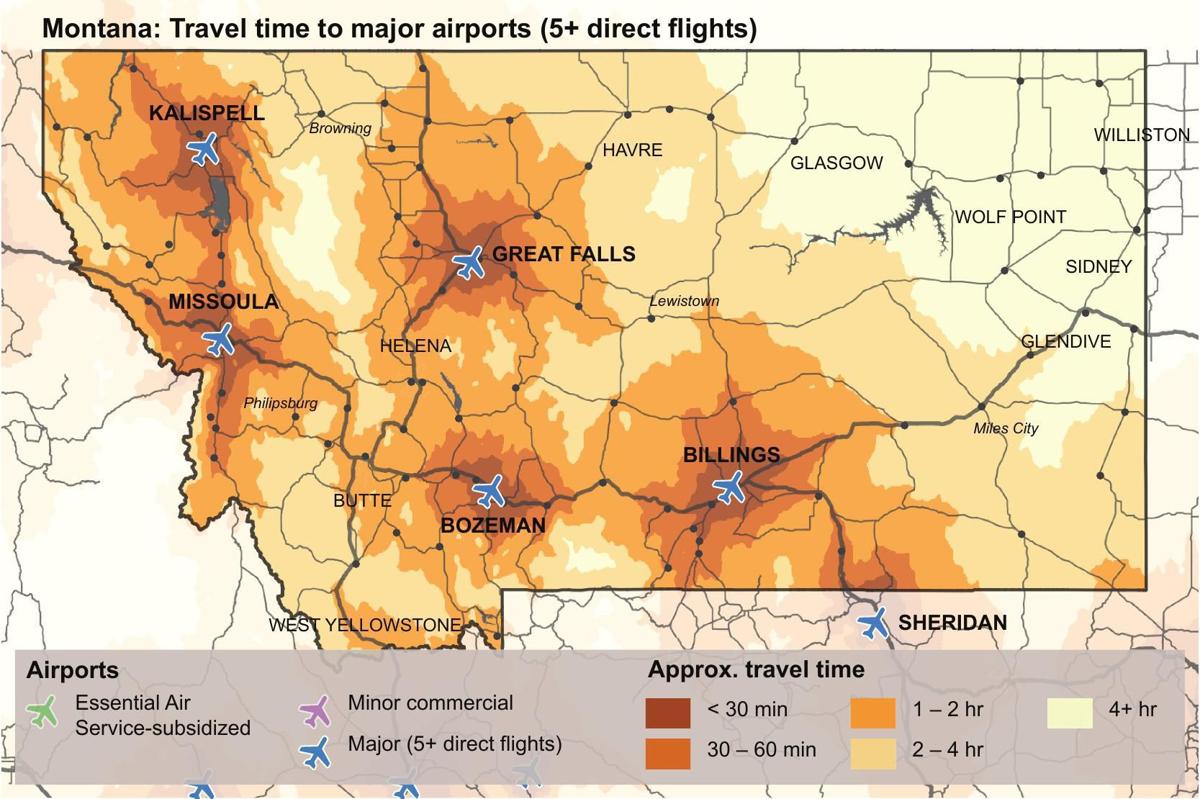 Those figures are derived from open source data published by the University of Oxford’s Malaria Atlas Project, which has tabulated how long it takes to travel across every square kilometer on the planet in a format usable for generating travel-time maps. The same data was used last year in a Washington Post article that labeled Glasgow the “middle of nowhere” in the lower 48 states based on travel time to major population centers.

When it comes to commercial air access, though, Glasgow, population 3,300, is in better shape than many of its neighbors. That’s thanks to the U.S. Department of Transportation’s Essential Air Service, which supports a twice-daily Cape Air route between Glasgow and Billings on nine-seat prop planes. Passengers pay as little as $29 one way.

The Glasgow route, allocated $2.2 million in federal subsidies annually, totaled just over 3,500 departures in 2017, according to the Montana Department of Transportation. Without that service, Glasgow residents flying for business or pleasure would have to drive 2.5 hours to the airport in Williston, North Dakota, or 4.5 hours to Billings.

“It’s a huge part of our community,” said Lisa Koski, who runs the Glasgow Area Chamber of Commerce. “You can still get access to the United States or wherever you need to go with that one-hour flight.”

The Cape Air service, Koski said, also allows dermatologists and oncologists out of Billings make day trips to see patients who would otherwise have to travel for medical attention. It’s a lifeline as well, she said, for residents with out-of-state family.

Annual subsidies for the seven Montana towns served by Essential Air Service routes — Glasgow, Glendive, Sidney, Havre, Wolf Point, West Yellowstone and Butte — total $14.5 million a year. For comparison, that’s about 40 percent of the operations budget for Yellowstone National Park. Montana airports with EAS routes had a total of 56,642 departures in 2017, according to state figures, including 20,665 from eastern and central Montana communities.

At a $288 million price tag nationally in 2018 — up 49 percent over 2012, according to the Congressional Research Service — it’s a consistent target of federal budget hawks. In 2017, for example, the Trump administration proposed ending subsidies for the five eastern and central Montana routes, according to the Billings Gazette. Both Sen. Jon Tester, a Democrat, and Sen. Steve Daines, a Republican, expressed opposition.

“We need to make government more efficient and effective without diminishing key capacities and programs and disconnecting rural communities,” Daines said at the time.

“If I was king of Montana and I wanted to do something useful in eastern Montana, I would put a big airport there,” said Rasker, who has published research arguing that air access to major urban centers explains much of the difference between rural counties in the American West that have performed well in economic terms and those that have struggled in recent decades.

Rasker and his co-authors say that amenities like public lands make many places in the rural West attractive destinations for knowledge-based workers — people like the Zellners — but that airport access is often a limiting factor. Their analysis found that Western counties closer to airports with several commercial flights a day generally had higher per-capita incomes and more diverse economies. In contrast to more isolated rural areas, they said, those “connected” rural counties were behaving in economic terms more like cities.

It’s now possible, Rasker points out, to catch a 7 a.m. flight from Bozeman and, gaining an hour with the time zone change, make it to downtown Seattle in time for a 9 a.m. meeting. That means a Bozeman-based entrepreneur can conduct business in person in the Pacific Northwest’s largest city on a day trip, catching an afternoon or evening flight back home.

“That’s a serious competitive advantage for Bozeman,” he said.

Rasker credits Bozeman’s vibrant tech scene in part to the options available through Bozeman Yellowstone International Airport, which he said has punched above its population base for years as a result of Big Sky Resort subsidizing airlines. The Bozeman airport has also tapped federal grants and Chamber of Commerce funds to support revenue guarantees that help persuade airlines to offer new routes.

Today, Bozeman Yellowstone International Airport is the busiest in the state, with 600,000 departures annually and 16 direct destinations.

As for Zellner, she eventually concluded that Philipsburg was “just too remote” for her NYC-based architecture job. Instead of finding a Montana-based architecture gig, she said, she decided to make a career change. Her husband still works remotely as a software developer, but she now works as a traveling tattoo artist. They’re currently living in Potomac, about 30 minutes east of Missoula, but thinking about moving back to Philipsburg.

It would help, she said, to have more midday travel options out of the Missoula airport, saving travelers like her the lost sleep of early-morning departures.

“If there were later flights, I think it would be a lot easier,” she said.

This story is published by Montana Free Press as part of the Long Streets Project. This work is supported in part by a grant from the Greater Montana Foundation, which encourages communication on issues, trends and values of importance to Montanans.

The Montana Code School says it can train Montanans for coding jobs in 12 weeks. What then?

MISSOULA -- Hunched over MacBooks in a cluttered room inside a low-slung Missoula office building, two young women are trying to make their app work.

More flights and larger airplanes brought another record year for the Helena Regional Airport in 2018.

Montana is the oldest state in the West. Demographics tell the tale.

Montana is, in fact, a country for old men, and women too, according to demographic statistics from the U.S. Census Bureau, which indicate tha…