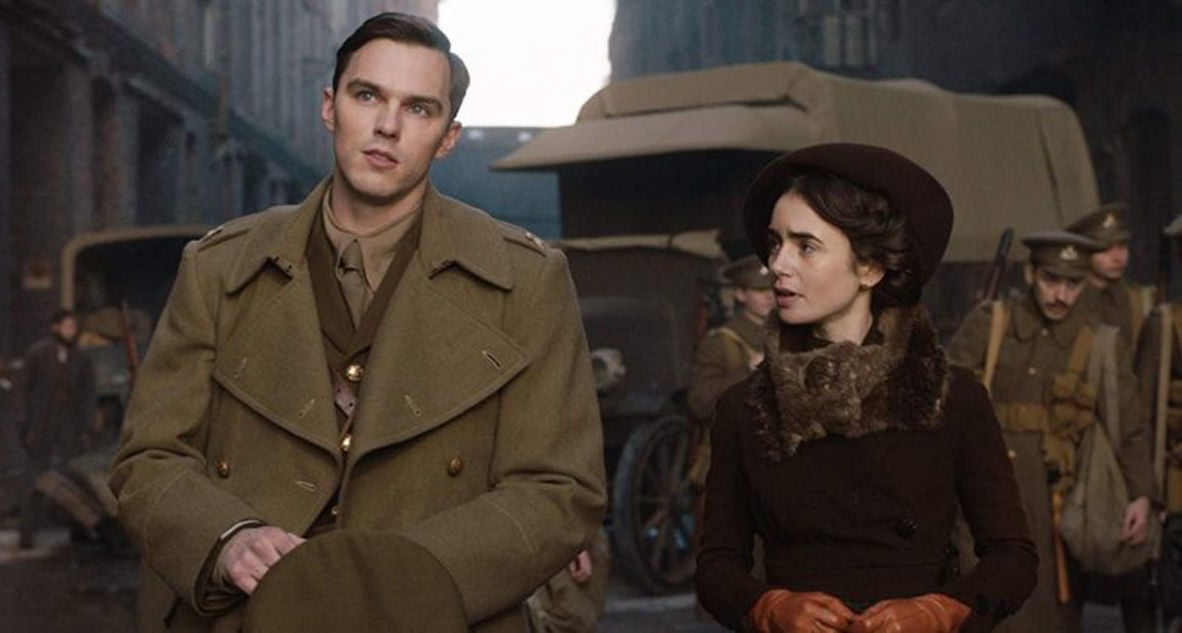 At The Myrna Loy

I met a man I quite liked at the movies Friday night: JRR Tolkien.

Fair warning that I’m a faint voice among a chorus of yawns and boos from other critics. They were clearly not as enchanted as I. Many unkind words have been heaped upon this biopic. Tolkien’s estate has disavowed the Disney film.

Well, let it be so. I liked it nonetheless. I’m happy to be the still small voice.

I’m not sure, of course, whether the character on the screen closely resembles the same man C.S. Lewis knew and loved.

But I care not.

Besides my friend Chris, a theological hobbit, has told me not to demand that biographies be meticulously faithful. I usually disagree, wanting truth in advertising. But this time, I’ll believe I’ll just ride the imaginary wave to shore.

So, who was John Ronald Reuel Tolkien?

Tolkien (1892-1973) was a serious scholar, who loved books and languages. He was a romantic who longed for connection. He was sent to WWI in France with his friends, and he cried when not all of them came home.

“Stay alive and come back,” his love had said to him when he left at age 22. Part of him did come back, but he left part of his soul on the battlefield in Somme.

“Tolkien” traces the early years in the life of the man who gave us the “Rings.” We meet his loving mom who read him fantastic tales, but died when he was only 12.

We also meet his close friends, some of whom later died in war.

We meet a professor (long live Derek Jacobi) who took this caterpillar under his wing and taught him to fly.

And, most captivating of all, we meet Edith the love of his life, a clear-eyed lady filled with love who stole his heart. FYI: Google a photo of Edith and then finds a photo of Lily Collins and you’ll sense why she was cast for this role.

Tolkien’s guardian tore the lovers apart so that Tolkien might focus more on his studies.

But when he turned 21, legally free from his guardian’s power, Tolkien dared to seek Edith’s love again – even though she had moved on from him.

“Tolkien” is a romantic film, more than an academic one. I suspect scholars will shake their head at all the kisses, longing looks and formula scenes set at a British boarding school.

But I felt we were meeting a man capable of envisioning a hobbit – a scholar with a mind big enough to invent languages and a compassionate man with a heart big enough to hold the creatures from Middle-Earth.

Actor Nicholas Hoult – channeling Benedict Cumberbatch and Hugh Grant – captures both the intelligence and the heart of Tolkien.

I did tire of the WWI war scenes along the Somme, where the references to “Lord of the Rings” explode relentlessly around us. Historians have confirmed that Tolkien “witnessed the worst day of British military history.”

And a curious and regrettable omission: the role of his Catholic faith in his life and work.

But what sold me on this story was a believable love story and a touching professor/student mentorship. I believed the Ronald/Edith chemistry.

I did regret the overly literal symbolism that tritely tells us where he got his ideas for “The Hobbit” and for “Lord of the Rings.”

But I was happy that the film ended with Tolkien dipping a quill and writing, “in a hole in the ground there lived a hobbit.”

History tells us that Tolkien was grading exam papers when he came upon a blank page – a page not in need of being marked! So, he gifted that paper with one of the great opening lines in fiction – right up there with Dickens, who coined both “It was the best of times, it was the worst of times” and “whether I shall turn out to be the hero of my own life or whether that station will be held by anybody else, these pages must show.”

When Tolkien is about to leave Oxford for wont of a fellowship, a professor senses the depth of his mind and his irrepressible determination – not to mention his deep sadness at saying goodbye to Oxford.

That professor embraces Tolkien, a turning point in the writer’s life.

I’m an easy mark for portrayals of teachers who transform lives. Thank you Don Pogreba, JoAnn Martin, Laurie Bowlds and Marcia Lythgoe for what you did for our daughter Kat.

You transform lives, know that.

“Tolkien” whetted my appetite for a film about the friendship of Tolkien and C.S. Lewis. I’m reading “Tolkien and Lewis, the Gift of Friendship” and that book itself is a gift.

I’d also like to know more about Tolkien’s mentoring of students at Oxford. Let’s rework “Dead Poets Society” and set it at Oxford with Lewis and Tolkien.

Who will join me for wine and conversation afterwards?

Just as I thought, we’ll need a bigger table.

A 68-year-old Helena man has been charged with five counts of aggravated sexual intercourse without consent.

After about eight weeks with no new confirmed cases of COVID-19 in Lewis and Clark County, county health officials reported two new cases of t…