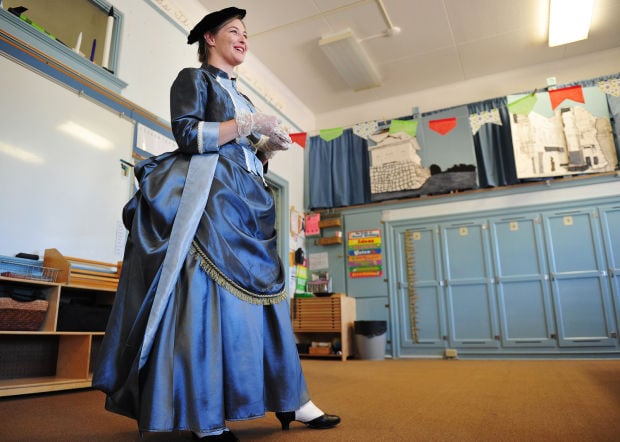 Jodi Delaney, a fourth- and fifth-grade Montessori teacher at Broadwater School, adds reality to her history lessons by dressing for the era of history she will be teaching. Delaney was recently recognized as a top American history teacher of the year for Montana by the Gilder Lehrman Institute of American History. 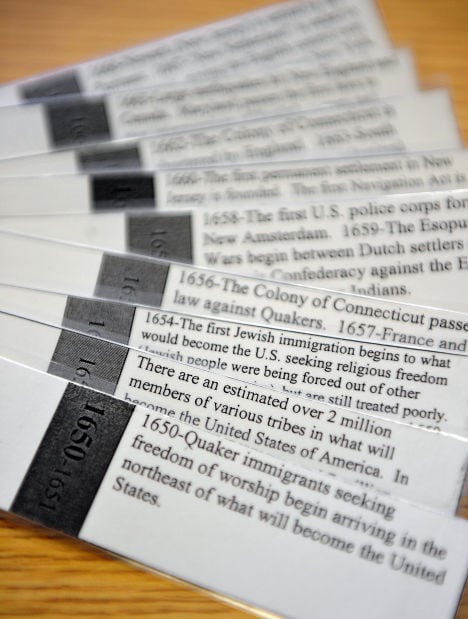 Moments in history will be hung on the walls of Jodi Delaney’s Broadwater School classroom each day of the year — often illustrated by what she’s wearing.

The walls of Jodi Delaney’s Montessori classroom are covered with artwork, posters, props and colorful decorations, creating a warm, inviting environment for her fourth- and fifth-grade students at Broadwater Elementary.

Covered, that is, except for a thin strip of bare wall above a row of student cubbies.

From that inconspicuous space grew an idea that would change the way Delaney teaches her students about the past.

And now it has brought her educational efforts national recognition. Delaney was Montana’s history teacher of the year for 2013, awarded by the Gilder Lehrman Institute of American History.

The award recognizes teachers who utilize creative or imaginative approaches to teach topics in American history. The institute selects one teacher in each state, and from that pool, a national winner will be honored this fall.

Delaney’s idea began by her calculating the length of the unused wall. It was about 15 feet, or 180 inches — as many days as are in a school year.

So she turned the wall into an enormous timeline, where every inch equals two historical years. Each school day, Delaney tacks up two years, beginning with 1650, with facts about both the Montana area and the United States.

But Delaney didn’t stop there.

Four years ago, when her class was relocated for a few days, Delaney dressed up in Great Depression era costume to keep the students interested.

“It started out as a silly kind of thing,” she said.

So she kept doing it, creating costumes to represent different historical eras and wearing them on the day that corresponds with the moment on the classroom’s timeline.

Even Delaney was surprised by the way those costumes allowed students to understand history in new ways.

“It just keeps growing,” she said.

She begins the school year in the 17th and 18th century, when she says changes in fashion occurred at a slower pace and at a level of detail too fine for elementary students. Still, she wears a costume once every week or two.

The pace quickens with each passing year, though, and by the spring Delaney said she has one for nearly every day.

The actual lessons may only last a few minutes, but Delaney wears the outfit all day. Her students begin to anticipate them, asking her when the next outfit will come.

Make no mistake, the project is about having fun — for the students and for Delaney. She makes the costumes herself using her own clothes or vintage material from local thrift stores. For the older costumes, Delaney does some “creative construction” using bed sheets or whatever else she can think of.

Delaney also keeps her own “hair rats,” or bundles of her hair, which she said was used frequently to create the elaborate hairdos of bygone eras, particularly in the years leading up to the Civil War.

She would not be able to perform her costumed instruction if Delaney were not a crafty fashion nerd herself. Colonial-era dresses cost at least $250, she said, and Delaney pays for the dozens of costumes herself.

Her grandmother and mother have even given her costume money as a birthday gift, she said.

“I did have to limit myself,” she said, noting that she only wears clothing that was worn in America by a white woman.

But the dress-up provides more than good cheer, Delaney said. It allows the students “to develop historical empathy and understanding.

“The clothing makes it feel real,” she said.

It helps her lessons include more than the dry, authoritative historical record. That’s especially helpful for students who are not so interested in topics like war, she said.

Instead, she helps students see into the surprising window to the past that fashion often provides.

For instance, Delaney said she has a costume of Lady Dunmore, the wife of the British governor of Virginia on the eve of the American Revolution. When Dunmore journeyed across the Atlantic, her arrival was honored with a formal ball, Delaney said.

Lady Dunmore had a reputation for her grace and charm, she said, and attendees fawned over her dress.

However, Delaney said her ladylike fashion was also a political statement to Americans that Lady Dunmore, a British woman, was part of the European elite.

The outfits aren’t just colonial and Victorian. Delaney has flapper, hippie, ’90s vogue and every fashion trend in between.

She also makes examples to represent life in 21st century.

One of Delaney’s newest costumes is a “goth” get-up she uses near the end of the school year, for the mid-2000s. She said it turned the heads of some parents last spring, though the lesson that accompanies the costume “is about judging people by what they look like.”

It is indicative of her Montessorian approach, in which lessons for different subjects spill into one another, and the students are given more room to investigate topics they find most interesting.

She said she teaches history in broad view. Her goal is to leave a strong “impressionistic” historical knowledge that can be filled with details in the students’ later years.

“It only takes a little bit of the day, but it makes it richer.”

Jodi Delaney, a fourth- and fifth-grade Montessori teacher at Broadwater School, adds reality to her history lessons by dressing for the era of history she will be teaching. Delaney was recently recognized as a top American history teacher of the year for Montana by the Gilder Lehrman Institute of American History.

Moments in history will be hung on the walls of Jodi Delaney’s Broadwater School classroom each day of the year — often illustrated by what she’s wearing.