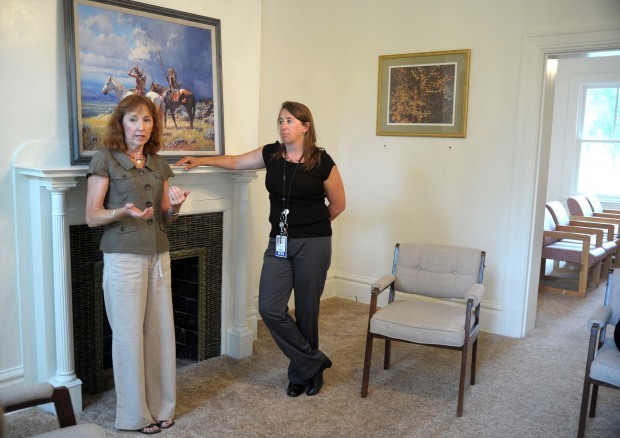 Eliza Wiley Independent Record From left Diane Carlson Evans, a trauma nurse in the Vietnam War, and Jonna Bretton, women’s veteran program manager for V.A. Montana, discuss reasons they have facilitated an anonymous women-to-women support group for those with PTSD, held at Fort Harrison every Thursday from 3 to 5 p.m. 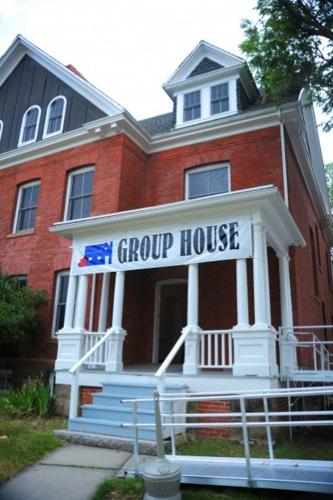 Eliza Wiley Independent Record – A group house, that once housed cavalry units but most recently was used by doctors at the VA, has been designated as a group house offering a safe place for women veterans to come together, women-to-women.
By EVE BYRON Independent Record

Diane Carlson Evans was thrilled last year to hear of a new support group for veterans with post-traumatic stress disorder. But when Evans walked into the event at Fort Harrison, she found only men there.

That made her uncomfortable at first, then angry. Evans, who served as a trauma nurse in Vietnam and has PTSD, was hoping to connect with other female veterans, as well as males, in a therapeutic environment. Instead, she learned that female veterans weren’t part of the new program.

It also reminded Evans of 1983, when she finally sought help for PTSD at a veterans center in Minneapolis.

“I asked them how many women from Vietnam they had treated, and he said I was the first,” said Evans, who now lives in Helena. “The first thing I saw, hanging on the wall, was a naked woman wearing only Harley chaps and a helmet. It was a place for the guys, very unwelcoming for women.”

So last August, Evans set out to establish a group specifically for military women, whether in active duty, the National Guard or the Reserve, where they could confide in one another and share their fears, their symptoms, their triumphs and their pain in a safe setting.

She knew the need existed for a women-specific program, since nationwide, 1.8 million women are military veterans, which includes almost 8,000 women in Montana. They make up 14 percent of those in active duty, and 15 percent in the Reserve and National Guard.

As of 2008, more than 195,000 women have served in Iraq or Afghanistan, serving as gunners, patrolling streets and driving trucks at front lines that can be as innocuous as the marketplace. But even with those numbers, oftentimes only a handful of females, sometimes only one, are in some platoons.

According to the Department of Veterans Affairs, one in five military women says she has been sexually assaulted or harassed.

“We know the incidence of PTSD in women is higher than it is in men; not because they’re the weaker sex and can’t deal with war, but because in the military sexual trauma is rampant,” Evans said. “We are constantly watching our back. These days, they have battle buddies, and don’t even go to the latrine alone. They are thrown into an environment that’s very different, an environment with male values and a male way of doing things.

“Then they’re thrown into situations they’re not trained for. They may be a truck driver, and then the truck runs over a land mine and they’re assaulted by the enemy. There’s trauma in witnessing death and dying, being shot at or firing at someone. It comes at them from all directions.”

On Thursday, her dream will come to fruition, when an open house is held from 3 to 5 p.m. at the Wingate Inn, 2007 N. Oakes St., for the Military Women to Women Peer Support Group. Beginning Aug. 12, the group will meet every Thursday in Building 4A, a recently remodeled historic home at the Veterans Administration Medical Center campus at Fort Harrison.

Evans and Jonna Brenton, the women veteran program manager for the VA, are quick to note that anonymity is an important element of the group, and that the military will never know who attends, in part due to the ongoing stigma that people seeking help — male or female — are not “tough enough” to be in the military.

“I can’t stress enough the importance of confidentiality and privacy,” Evans said, standing near a fireplace in the elegant, three-story brick duplex that used to house officers and doctors at Fort Harrison. The walls are in need of a few pictures and the furnishings generally consist of a loveseat and a dozen or more soft chairs, but it’s a warm setting where she and Brenton hope women will be able to comfortably talk about their concerns.

“From 3 to 5 p.m. every Thursday this whole house is ours,” Evans adds. “But this is group-run, and if they don’t like coming out to the campus we can go elsewhere. If the hours don’t work we can change that.”

The group is open to military women who may not have a PTSD diagnosis, but who continually relive traumatic events; who feel numb, depressed or constantly keyed up; who have feelings of hopelessness, shame or despair; relationship or drinking problems; or other physical symptoms of PTSD.

“This is not behavioral therapy, but is peer-to-peer counseling,” Brenton said, adding that one of two female therapists will always be available if needed. “We’re also open to National Guard and Reservists, so this isn’t just for veterans. We want to get help for women who are having problems now.”

They don’t know how many people will attend the informal open house this week, or the peer-to-peer sessions.

“But you don’t know what the needs are until you open the door,” Brenton said. “Even if just two come, two will become four and four will become eight. Our vision is this will go statewide, and that with technology, women in Missoula and other communities will be able to tap into this.

“This isn’t a VA group. It’s an opportunity for the Veterans Administration to support a peer group for military women.”

An open house for the military women-to-women support group for those with PTSD will be held from 3 to 5 p.m. Thursday at the Wingate Hotel, 2007 N. Oakes (off Cedar Street) in Helena. The group begins meeting from 3 to 5 p.m. every Thursday on Aug. 12 in building 4A on the VA Medical Center campus at Fort Harrison.

The Helena-Lewis and Clark National Forest said Monday that a grizzly bear was recently caught on camera in the Johnny Gulch area in the Elkhorns.

Body found in Helena after man picked up by recycling truck, authorities say

The lawsuit accuses state officials of attempting to force public hunter access to private land through restrictive hunting regulations and programs such as game damage hunts, which require public access.

It took just 15 minutes for Teresa Petterson’s life to turn upside down.

In an interview Friday with the Montana State News Bureau, Ryan Zinke said the residence is her legal primary residence but that his legal residence is and has been in Montana.

A woman's voice — which authorities say is Vicky White's — is heard saying things including, "wait, stop ... airbags going to go off and kill us."

Authorities in Utah said a man suspected in the double homicide of a former Montana resident and her spouse has killed himself after telling another person that he had killed two women and provided details known only to investigators.

Robert Michael Arellano of Helena was sentenced Tuesday morning to 110 years in Montana State Prison for sexually abusing a minor for a more than 18-month span.

U.S. solar projects on hold due to tariff inquiry

U.S. solar projects on hold due to tariff inquiry

Eliza Wiley Independent Record From left Diane Carlson Evans, a trauma nurse in the Vietnam War, and Jonna Bretton, women’s veteran program manager for V.A. Montana, discuss reasons they have facilitated an anonymous women-to-women support group for those with PTSD, held at Fort Harrison every Thursday from 3 to 5 p.m.

Eliza Wiley Independent Record – A group house, that once housed cavalry units but most recently was used by doctors at the VA, has been designated as a group house offering a safe place for women veterans to come together, women-to-women.
© Copyright 2022 Independent Record, 2222 Washington St. Helena, MT 59602 | Terms of Use | Privacy Policy | Do Not Sell My Info | Cookie Preferences
Powered by BLOX Content Management System from TownNews.com.
You don't have any notifications.