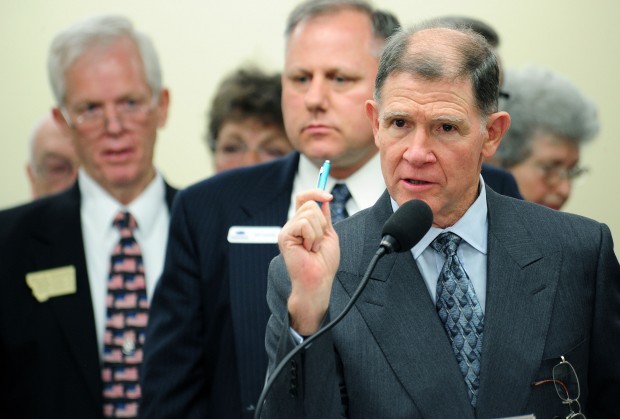 Harris Himes, with Montana Eagle Forum, speaks against HB514 Friday morning in front of the House Judiciary Committee. Himes commented that the bill was ‘in violation of his rights.’ 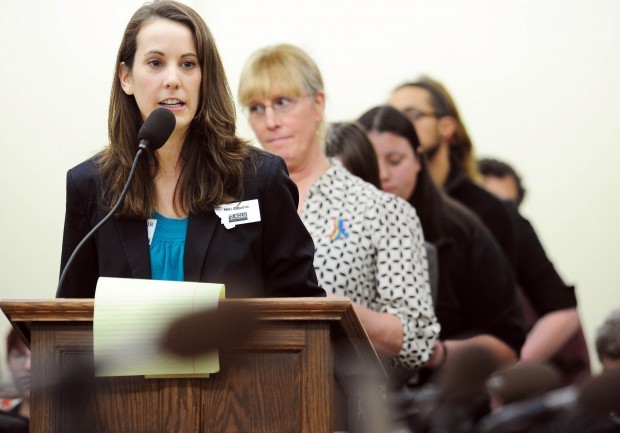 Social conservatives supported a bill Friday to nullify Missoula’s ordinance that protects residents from discrimination because of their sexual orientation and gender, while human rights advocates lined up against it.

At issue was House Bill 516, by Rep. Kristin Hansen, R-Havre, to prohibit local governments from enacting ordinances or other policies like Missoula’s that include, as a protected class from discrimination, any groups not included under the Montana Human Rights Act.

The other bill, HB514, by Rep. Edie McClafferty, D-Butte, would expand the Montana Human Rights Act to prohibit discrimination based on gender identity or expression and sexual orientation. This time, human rights groups testified for that bill, while social conservatives opposed it.

The result was a pair of hearings that were at times tense before the House Judiciary Committee. The panel took no immediate votes on them.

A Democratic lawmaker protested one witness's use of the word “abomination” in his testimony to describe homosexuality.

Some Democrats also objected to a decision by committee chairman, Rep. Ken Peterson, R-Billings, to not allow people unable to testify because of time constraints to at least stand and say their names. However, they figured out a way around it by having more than 50 opponents stand as Rep. Diane Sands, D-Missoula, read each of their names from the sign-up list.

Missoula enacted such an ordinance in April 2010 to protect gay, lesbian, bisexual and transgender people from employment, housing and other forms of discrimination or perceived discrimination because of their sexual orientation or gender identity.

“The crux of my testimony today is that I believe that the Montana Human Rights Act preempts the city of Missoula from doing this,” Hansen said on behalf of her HB516.

State law already provides an established set of procedures for people to file discrimination complaints with the Montana Human Rights Commission, for investigators to look into the charges, for the commission to consider them and for an appeals process to court.

“Montana’s businesses, nonprofits and other entities are entitled to the predictability of having a single forum for discrimination cases,” the Havre lawyer said.

But opponent, Niki Zupanic, policy director of the ACLU of Montana, raised federal and state constitutional questions about the bill.

The Montana Constitution and legal precedents clearly provide that a charter city like Missoula “has a presumption of authority to act to respond to local needs,” Zupanic said. “Absent a clear prohibition, there is no prohibition in our current law.”

Leading the support for Hansen’s bill were two Bitterroot Valley conservatives who were outspoken opponents of the Missoula ordinance last year.

“There are those of us who would not rent to gay and lesbian people for religious reasons,” said Himes, a Hamilton pastor.

Pressed later by Rep. Ellie Hill, D-Missoula, what those religious reasons are, Himes said: “It is God himself who says that homosexuality is an abomination, and he has various punishments for that too.”

Hill asked what those punishments are, and Himes quoted Leviticus, saying that homosexuals “surely shall be put to death.”

Dallas Erickson of Montana Citizens for Decency through Law said, “This law in Missoula means that a person with a penis can now go into the showers where the people with vaginas have gone.”

Erickson said he knows Ravalli County residents who won’t take their children into Missoula businesses “because they don’t know if they’re going to be confronted in the restroom with a different gender.”

Leading the opposition to the bill was Dave Strohmaier, a Missoula City Council member who co-sponsored the ordinance.

“I respectfully but strongly urge you to table this bill,” he said. “Sadly, discrimination against (lesbian, gay, bisexual and transgender) members of our community is alive and well, which is precisely why I co-sponsored our ordinance.”

Strohmaier said he takes “very seriously the rights granted to self-governing municipalities by the Montana Constitution” and urged lawmakers to respect the Missoula ordinance and the civil rights it ensures.

Ryan Morton, a gay man from Missoula, said he pays $40 a month for his gym membership for the use of all the facilities.

“But in Helena, if the owners found out that I was gay, they could refuse me entrance to the locker rooms and showers without repercussions,” he said. “And I pay for those services. I’ve paid for those facilities, and I’m not a criminal. I’m not a pervert.”

Following a rough year of delivery troubles, the U.S. Postal Service is poised for 10 years of restructuring including longer delivery times. That has letter carriers in Montana concerned.

“This doesn’t make sense in that I was vaccinated and I caught this. There was such a slight chance,” Bierbach said.

Harris Himes, with Montana Eagle Forum, speaks against HB514 Friday morning in front of the House Judiciary Committee. Himes commented that the bill was ‘in violation of his rights.’