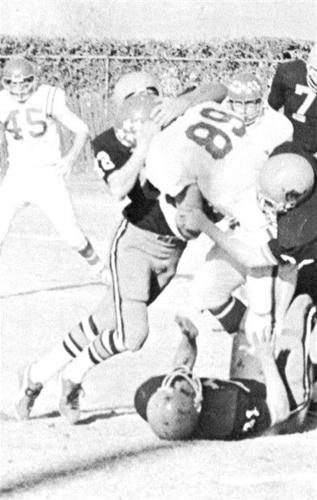 Helena High tight end Pat Donovan (89) is gang-tackled by three Billings players at Vigilante Stadium in 1970. Donovan went on to a nine-year NFL career for the Dallas Cowboys. 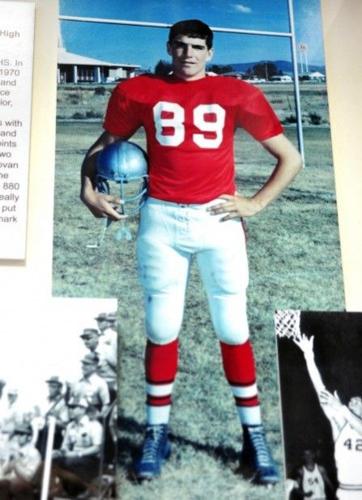 Editor's note: As part of the celebration of Helena's 150th birthday, this IR feature takes a historical glance at the local sports scene since the town was founded in 1864. Here is brief recap of the four major sports -- football, basketball, track and baseball -- over the past century and a half.

Donovan, arguably Helena’s greatest all-time athlete, was a four-time All-Pro tackle for Dallas, and a member of the 1977 Cowboys Super Bowl championship.

HHS gridders earning the Gatorade Player of the Year were Andy Petek and Matt Hustad.

In 1958, the Greenies went 7-2, while tying for the Class B Southwest Conference title. The 1968 Class A Cougars finished second to Hamilton in the conference with a 7-1 mark.

Cathedral lineman Rich Ronan (1961-62) went on to play professionally with the Norfolk Neptunes of the Continental Football League.

Capital High, which was founded in 1973, has become one of Montana’s most dominating football programs. The Bruins won their first state championship in 1978, and since then have captured 10 more titles, the latest coming in 2011. The Bruins hold AA records of 27 consecutive victories, and five straight chipper appearances (2004-08).

And three other CHS alums have attained coaching positions in the NFL: Bobby Petrino, Paul Petrino and Tom McMahon.

The Saints have qualified for the national playoffs 22 times, including nine under coach Bob Petrino (1971-97) and 13 under Van Diest (1998-present).

In 1975, former CC running back Dan Rambo played in a preseason game for the Denver Broncos.

Casey FitzSimmons was the first Saint to make the NFL, as a tight end for the Detroit Lions from 2003-09. And Carroll also boasted a two-time NAIA Player of the Year, in the person of quarterback (and CHS alum) Ty Emmert, in 2003 and 2005.

The sport of basketball was initially played at Helena High during the 1901-02 school year, with the “Tigers” fielding both a boys and girls team.

In fact, the school’s first two state hoops championships were captured by the girls, in 1907-08.

The game was played half court since the girls were considered “too delicate to run” and eventually became an intramural sport.

The program’s first super star was Linda Raunig (1973-75), amassing 1,176 career points in three years. Raunig went on to establish 16 records at the University of Denver, before playing with the Phoenix Flames of the Ladies Professional Basketball Association.

On the boys side, the initial sanctioned state hoops tournament took place in 1911. The Helena Bengals were the state’s first dynasty, winning three successive championships from 1914-16, and a fourth crown in 1919.

He went on to star for the University of Montana, where he became the only Capital City native offered a NBA contract (Minneapolis Lakers) before sustaining two career-ending knee injuries.

The 1951 Greenies placed as Class C runners-up, losing the championship game to Poplar 43-42 on a desperation shot by the Indians at the buzzer.

Two of the school’s better players were Pat Kelly and Walt Romasko. In 1968, the Class A Cougars upset Helena High in the first crosstown match-up, 79-68 in overtime.

But Manion still holds the season average mark of 21.7 ppg.

The Saints have made nine appearances in the NAIA National Finals Tournament, while qualifying for the NAIA Final Four in 2005.

On the women's side, Carroll has garnered four Frontier titles, while qualifying for nationals in 2006, 2008 (Elite Eight) and 2013.

The Saints career scoring leader is Jolene Fuzesy, compiling 2,062 points from 2004-07. She also holds college basketball’s all-time 3-point accuracy record of 51.6 percent from beyond the arc.

HHS’ most prolific scorer at the state meets was sprinter/hurdler Nate Boyd.

Helena pole vaulter Todd Foster has owned the all-class record of 15-feet-9 since 1988.

Greg Carothers holds the school marks at state meets for career points (62), while Jake Eldridge has the most state medals (14). A few other standouts include Shawn Holland, Kevin Johnson and Kevin Van Nice.

The Bengal girls tracksters captured their lone state championship in 2000.

The Bruin girls trackster with the most state championships is Emily Nay (1992-95), who achieved a rare quadruple double, winning both the 1,600 and 3,200 all four years.

Helena Cathedral/Helena Central High did not have a state track champion, although several guys placed in the top three.

Track and field was reinstated at the college in 2011, and, since then, the Saints have crowned three national titlists: Easton Padden (pole vault), Kathleen Mulligan (triple jump) and Rhianna Grossman (3,000 run).

The game of baseball was first played in Helena in the 1880s, when the ball field was located at Central Park, present site of Green Meadow Country Club.

In 1902, the Helena Senators won the Pacific Northwest League, which was comparable to today’s AA minors.

One of the more notable Smelterites was future country-and-western singer Charley Pride.

American Legion baseball has been played annually since 1932, which was also the same year the park was built, now called Kindrick Legion Field.

East Helena’s Herb Plews is the only local ball player to make the major leagues, diamonding for the Washington Senators and Boston Red Sox from 1956-59.

Minor League baseball returned to Helena for the first time in 64 years, with the forming of the 1978 Class A Helena Phillies. Since then, local teams capturing Pioneer League titles were the Gold Sox (1984), and Brewers (1995-96, 2010).

Two Helenans have umpired in the Pioneer League; Jim Knight and his son, Brian. Brian Knight is currently working his fourth full-time season as a MLB umpire.

Miners, madams and murders: A series on Helena's colorful past

150 years of Helena sports: The best of the rest

In addition to the four major sports -- football, basketball, track and baseball -- Helena has seen action in a wide variety of athletic event…

Helena High tight end Pat Donovan (89) is gang-tackled by three Billings players at Vigilante Stadium in 1970. Donovan went on to a nine-year NFL career for the Dallas Cowboys.