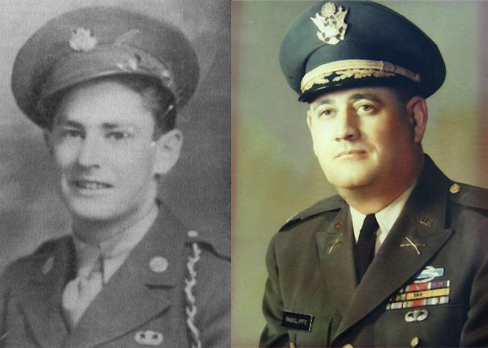 This combined image shows Joe Glass, left, and Mark Radcliffe, members of the First Special Service Force during World War II. Glass, 92, and Radcliffe, 94, died Sunday within 12 hours of one another. 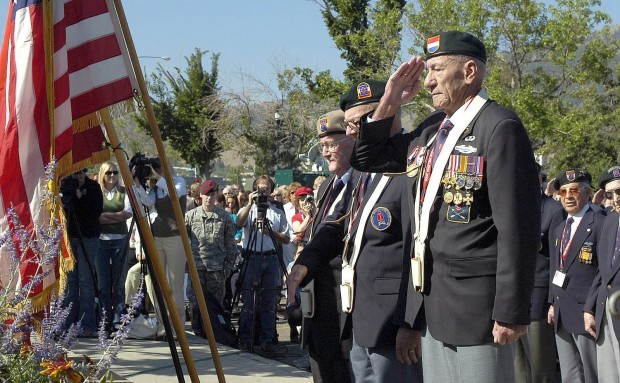 Eliza Wiley Independent Record- Before removing the colors, the color guard gives a parting salute at the close of the ceremony celebrating the 60th reunion of the Devil's Brigade in August of 2006. The last two First Special Service Force members from Montana, Mark Radcliffe and Joe Glass, both died Sunday within twelve hours of each other.

Ninety years ago, two boys grew up on opposite corners of mid North America. Mark Radcliffe was born in Farmington, N.M., in 1918, while Joe Glass was born two years later, in Sarnia, Ontario.

In 1942, Radcliffe and Glass were both selected for the Plough Project, described as a “suicide mission,” and began training at Helena’s Fort Harrison. The First Special Service Force (FSSF) was an elite commando unit combining American and Canadian soldiers.

During World War II, the FSSF captured more than 27,000 enemy prisoners. Nicknamed the “Black Devils” by the Germans, their legendary accomplishments were inspiration for the movie “The Devil’s Brigade.”

After the war, the two men returned to Helena, where they spent the remainder of their lives.

On Sunday, Radcliffe and Glass — who were Montana’s last surviving members of the FSSF — died just 12 hours apart.

Radcliffe, 94, was stationed with the 161st Infantry in Hawaii when Pearl Harbor was bombed by the Japanese on Dec. 7, 1941.

He then attended Officer Candidate School at Fort Benning, Ga., graduating in July 1942, before volunteering for the FSSF.

As commander of Third Company, Third Regiment, Radcliffe participated in the North Africa campaign, and the conquests of Italy’s Mount la Difensa and Mount Majo.

While on patrol on the beachhead of Anzio, he was captured and taken prisoner by the Germans. During interrogation at La Florre, Radcliffe managed to escape. Traveling at night, it took three days to work his way back to his outfit, during which time he was hit by mortar shrapnel.

After a stint in the hospital, Radcliffe was assigned to lead an independent reconnaissance mission that was part of the retaking of Rome. At 6 a.m. on June 4, 1944, his special corps patrol passed through Rome’s Porta San Giovanni Gate, a half-hour ahead of any other Allied unit.

Glass, 92, enlisted in the Canadian Army in 1940. He was a bayonet instructor before volunteering for the FSSF in order to “get into combat quicker.”

With the First Company, First Battalion, Second Regiment, he was wounded during the legendary midnight assault up the cliffs of Mount la Difensa.

During the siege of Anzio, Glass and the late Lorin Waling teamed up as a mortar tandem near the Mussolini Canal. The two were part of dozens of recon patrols and “nearly 90 combat ambushes in No Man’s Land” between the Allies and Nazis.

During the breakout in March, 1944, mortar shrapnel hit Glass in the chest and exited out his back. His lung collapsed, most of his ribs were broken and separated from his spine, and he was paralyzed from the waist down.

When he started coughing up blood, Glass told his buddy, “Say goodbye to my wife and kids.”

Then another piece of shrapnel hit him in the arm.

But he somehow made it out alive and was taken to an Army hospital. In surgery, the doctors wired his ribs to his backbone, and removed one rib to repair his lungs.

Glass returned to Helena with a 50 percent disability, but with the same grit and determination he used to help win the war, he worked most of his life at various jobs. His occupations ranged from delivering potato chips and milk, to selling cars and insurance; from tending bar and driving taxis and concrete trucks, to owning and operating several businesses.

Glass and Radcliffe were among many of the FSSF who married local women.

Radcliffe, who raised children Bob and Carolyn with his wife, Edith, remained in the Army Reserve, retiring as a full colonel.

He traveled to Fort Bragg on numerous occasions while spearheading the high-altitude training facility for the Special Forces operations at Fort Harrison, and also helped start the military museum at the Helena fort.

“Dad was just a soldier through and through,” Bob Radcliffe said.

Thumbs up to the members of the Devil’s Brigade — those still living and those who have passed on.

Special Service Force to be based in Helena

Even as the “Devil’s Brigade” First Special Service Force prepares for what organizers say will be its last reunion, the National Guard announ…

This combined image shows Joe Glass, left, and Mark Radcliffe, members of the First Special Service Force during World War II. Glass, 92, and Radcliffe, 94, died Sunday within 12 hours of one another.

Eliza Wiley Independent Record- Before removing the colors, the color guard gives a parting salute at the close of the ceremony celebrating the 60th reunion of the Devil's Brigade in August of 2006. The last two First Special Service Force members from Montana, Mark Radcliffe and Joe Glass, both died Sunday within twelve hours of each other.