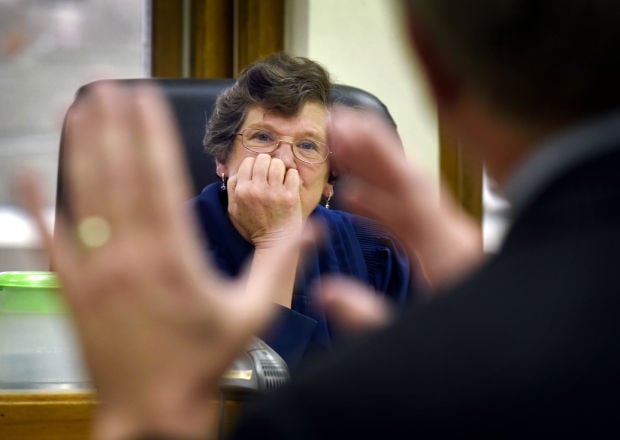 The city of Missoula is asking District Court to direct the Montana Public Service Commission to dismiss its proceedings with a rival buyer for Mountain Water Co., saying the city has already been awarded constructive ownership and that any actions taken by the PSC are moot. 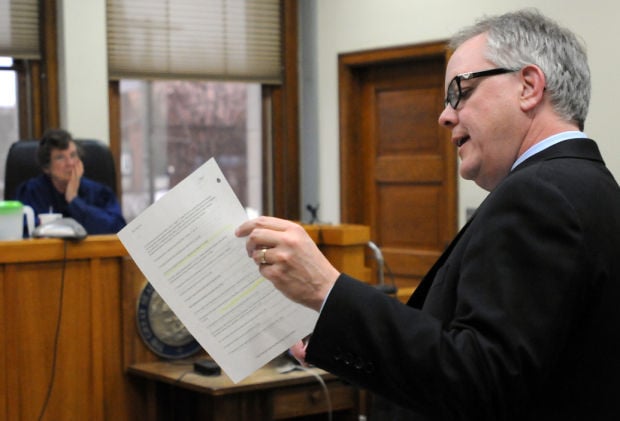 Carlyle Group attorney Bill Mercer shows judge Karen Townsend documents that he says show Carlyle should not be part of the condemnation case. 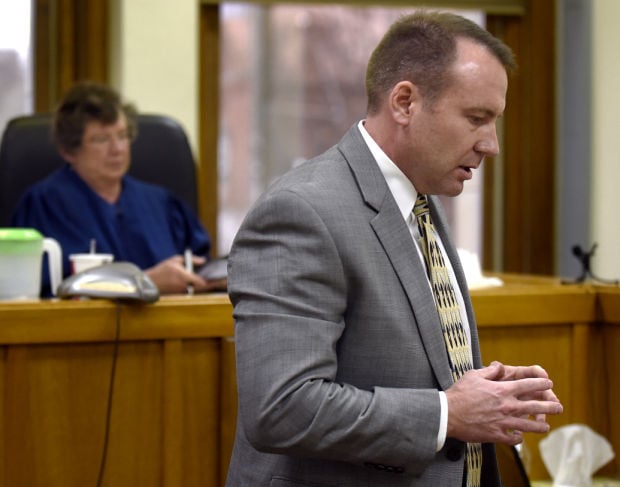 Attorney Scott Stearns of Boone Karlberg in Missoula, is the lead attorney for the city of Missoula in its eminent domain case to control its water supply.

The Carlyle Group appeared to be "calling the shots" when it came to at least one proposed transaction with Mountain Water Co., Judge Karen Townsend said Thursday.

In Missoula County District Court, the judge heard global equity firm Carlyle's arguments that it should be dismissed from the eminent domain case the city filed against it and the water company.

Townsend did not issue a ruling Thursday.

However, the judge quizzed lawyer Bill Mercer on his claim that Carlyle Infrastructure Partners should not be a defendant in the case. Carlyle earlier made a similar claim, and the judge ruled against it.

Mercer argued the city can't point to any property – "not a truck, not a pipe, nothing" – that Carlyle owns in Missoula. Rather, he said, Mountain Water is the named owner of the assets and water rights the city wants.

"If the city is successful, it would be Mountain that gets paid. Carlyle won't get paid anything," said Mercer, of Holland and Hart in Billings.

Said Townsend: "So Carlyle is not expecting to get any money for Mountain Water from the sale of this? Really?"

Mercer: "If the city were to prevail, a check would be cut for the assets, and it would go to Mountain Water."

Townsend: "And then what happens to that check?"

Carlyle has argued it should not be party to the lawsuit because it's not a property owner in Montana, but is instead an "upstream owner."

Mountain Water is owned by Park Water in California, and those utilities along with a third in California comprise Western Water Holdings of Carlyle Infrastructure.

In response to the judge, Mercer pointed to Mountain's parent company in California.

"Again, Park Water owns those three utilities. So if this condemnation was successful, then that money would go to Park," he said.

Said Townsend: "Then, it would go on up a line to you, right?"

Mercer stumbled in response, but he eventually agreed.

"It certainly, I'm not going to deny, it's sort of. Yeah, I mean, that's right. It's like any other corporate structure," Mercer said.

However, he reiterated the argument that an upstream, equity owner is distinct from a property owner.

As part of Carlyle's argument, Mercer also said the city of Missoula does not have a "franchise" with Carlyle. By a plain reading of the statute, he said, it must have a franchise or contract in place in order to pursue eminent domain.

On behalf of the city of Missoula, lawyer Scott Stearns said the defendant is misreading the statute. The law states a condemning party can have a contract – but that's not the only circumstance under which it can proceed, he said.

And many documents make it clear Carlyle owns Mountain Water Co., he said. Plus, he said the defendant's lawyer needed to look no further than the deposition of one of Carlyle's own officers, Robert Dove, "to find out all the reasons why he was wrong."

Stearns said the deposition makes it "abundantly clear" Carlyle owns the water company, and Dove holds the purse strings when it comes to Mountain.

"It's brutally honest, and it's completely against the position being advocated right now," Stearns said.

The eminent domain trial is set for March 18. In the end, the city aims to gain ownership of its drinking water system.

It's clear the economic costs of condemnation are a risk to the public.

Mountain Water Co. is once again arguing that executive compensation is private information. And again, its arguments are less than convincing.

At Mountain Water Co.'s parent company, 42 employees earn, collectively, some $6.1 million a year, according to a company filing.

It would be a big hit to cash reserves, but just a slice of the city's capacity to bond.

Mountain Water Co. wants to keep its water rights on Rattlesnake Creek – even if the city of Missoula succeeds in taking over the local drinki…

Greg Gullickson was out of town when he learned Missoula Mayor John Engen was willing to take Mountain Water Co. to court and force its sale.

In the 1980s, the city of Missoula lost a condemnation case against Mountain Water Co.

Mountain Water Co. is worth an estimated $40 million more than the city of Missoula can afford to pay, according to lawyer Joe Conner.

The Carlyle Group isn't off the hook in the city of Missoula's eminent domain case against the local drinking water system.

The city of Missoula hasn't had a Public Works director for two years.

The legal bill in the city of Missoula’s condemnation case against Mountain Water Co. and the Carlyle Group has reached an estimated $3.5 mill…

The condemnation trial for Mountain Water Co. won't be postponed, even by a couple of months, according to a Missoula County District Court or…

The Carlyle Group is again claiming it doesn't own Mountain Water Co.

Battle over Missoula's water company plays out in legal footnotes

They're squabbling in the footnotes.

The city of Missoula is asking District Court to direct the Montana Public Service Commission to dismiss its proceedings with a rival buyer for Mountain Water Co., saying the city has already been awarded constructive ownership and that any actions taken by the PSC are moot.

Carlyle Group attorney Bill Mercer shows judge Karen Townsend documents that he says show Carlyle should not be part of the condemnation case.

Attorney Scott Stearns of Boone Karlberg in Missoula, is the lead attorney for the city of Missoula in its eminent domain case to control its water supply.