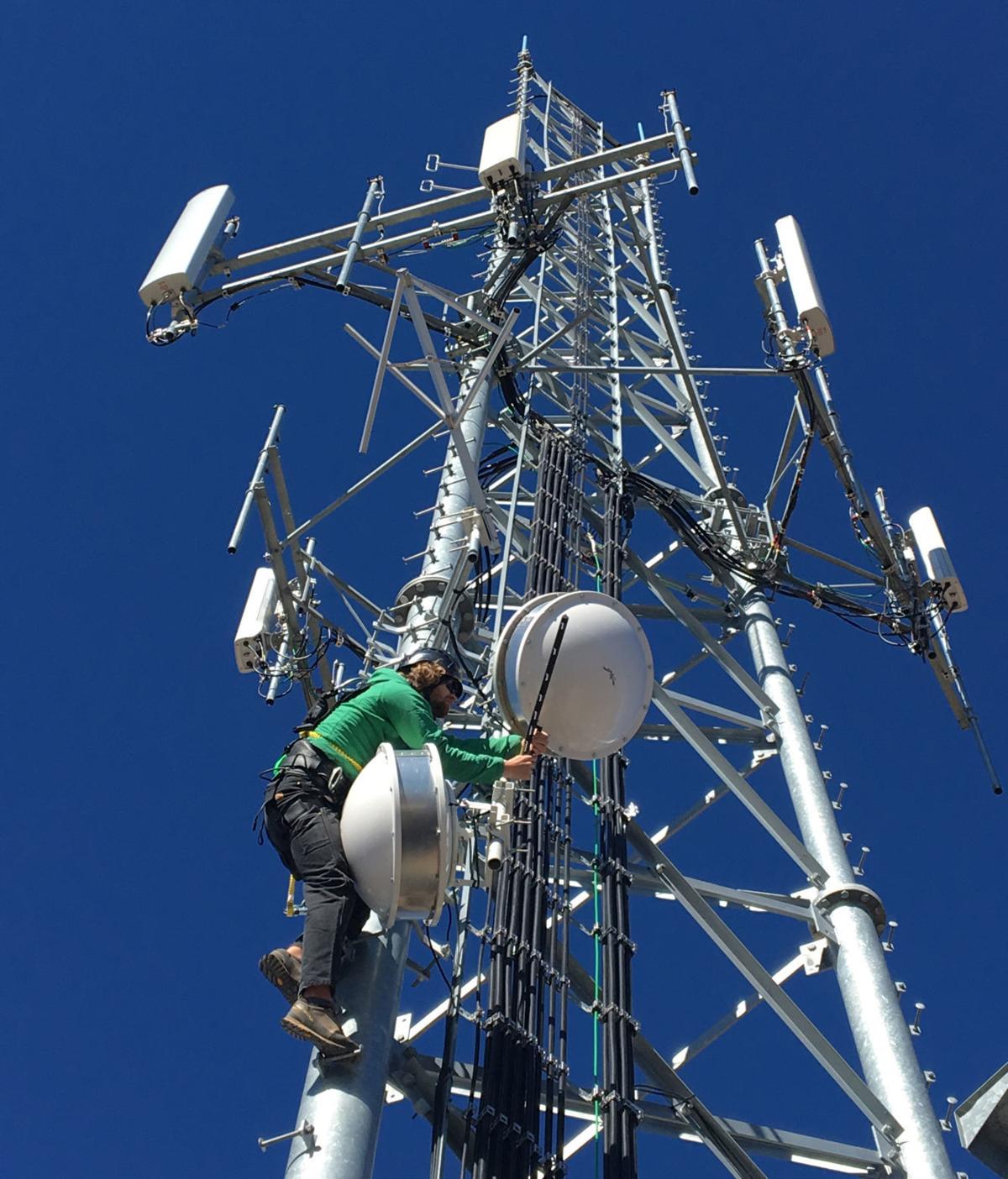 UNAVCO field engineer Dylan Cembalski replaces damaged antennas on the communications tower at Sawtell Peak. The tower is shared by multiple groups that use this regional high point to relay data. 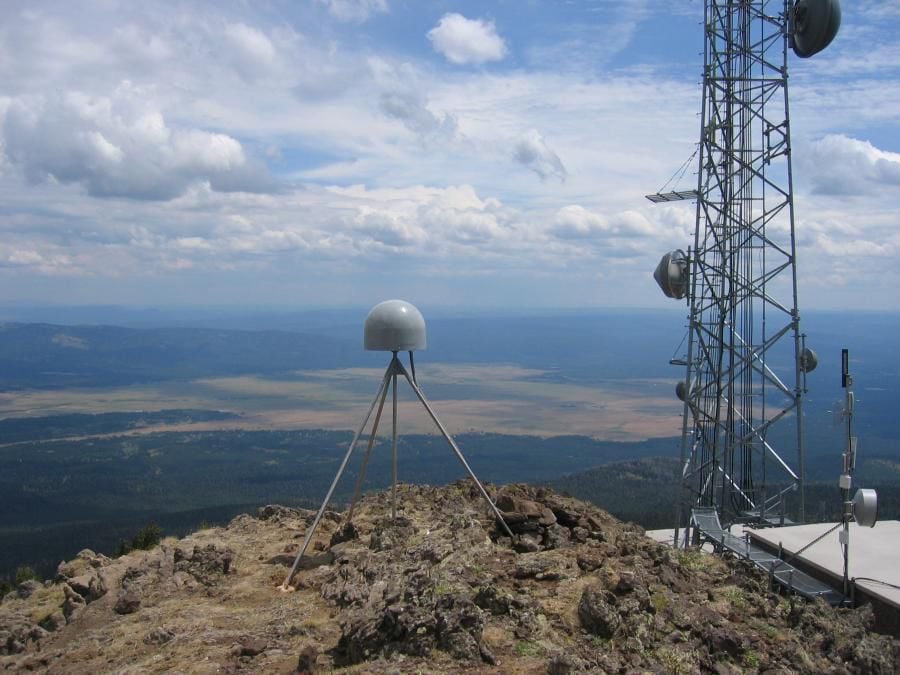 GPS station P361, on Sawtell Peak, is shown on a clear day. Electrical storms destroyed multiple antennas, including the GPS antenna — here under a protective plastic dome — and three communications antennas on the tower. Data from P361, along with data from other stations in the Yellowstone region, are sent to UNAVCO for free and open distribution.

Yellowstone Caldera Chronicles is a weekly column written by scientists and collaborators of the Yellowstone Volcano Observatory. This week's contribution is from Beth Bartel and Tim Dittman, from the non-profit UNAVCO consortium in Boulder, Colorado.

About 18 miles west of the Yellowstone National Park boundary in Idaho, UNAVCO field engineer Tom Lyman surveys the damage at GPS station P361 on Sawtell Peak. This is an important site, not only because it is located close to active faults in the Yellowstone region, but also because it serves as a data relay for four additional nearby GPS stations. None of the GPS equipment is transmitting data.

UNAVCO, a member of the Yellowstone Volcano Observatory consortium, is responsible for maintaining the deformation network in and around Yellowstone. In Yellowstone National Park alone this network includes 14 GPS stations and six borehole geophysics stations. All the data are free and open access.

Maintaining instruments in Yellowstone requires constant sleuthing, as well as resourcefulness. The vast distances, limited access and harsh winter weather all pose particular challenges to keeping data flowing day after day and season after season. Specialized state of health monitoring tools combined with prior knowledge helps engineers remotely diagnose any problems before they arrive onsite, to be as efficient as possible with limited resources. Lyman and others had been alerted when this subnetwork of stations had stopped transmitting data, and unsuccessfully tried connecting to the stations from his office before he drove out from his home northeast of the park. His remote diagnosis speculated there was likely a problem with the communications system at the site. But was that the only problem? And what happened?

There are multiple points of failure at any remote geophysical instrument site. Multiple elements, instruments, cables and connections allow a GPS signal to be received at a GPS antenna, transmitted to a GPS receiver and then transmitted via communications equipment to UNAVCO, each of which can and has failed. Stations have suffered from faulty equipment, power failure, snow damage and other ailments. Snow is a particular problem in the Yellowstone region and can damage the solar panels or the radomes protecting the high-precision GPS antennas. But the sites around Sawtell Peak, where Lyman stands in mid-July, failed early in the summer.

Once on location, Lyman sees that not only has the internet connection to the outside world failed, but the radio antenna and GPS antenna are damaged as well. In fact, most of the infrastructure of the site will have to be replaced. A few tell-tale signs point to the culprit: the area has been struck by lightning. Based on the damage, the strike must have been quite close. Grounding was not able to save the many antennas at the site from failure, although lightning protection prevented the receiver from shorting out. Lyman determined that he will have to return to the site with other help, as much of the equipment that needs to be replaced is high on the communication tower.

Every year, several GPS stations in the 1,100-station Plate Boundary Observatory, of which the network at Yellowstone is a part, are damaged by lightning. Locations that are good for GPS stations have clear sky view. High points are especially attractive as they allow for easier data transfer — so it's no surprise that these stations are also in danger of being struck.

P361 on Sawtell Peak is not the only deformation station in the Yellowstone region to be affected by lightning — and the other station didn't fare so well. Parts of borehole geophysics station B205 near Norris Geyser Basin were permanently damaged. Unlike GPS stations where equipment is above ground and relatively easy to replace, the borehole suite of instruments can reside in cured cement as deep as 700 feet below the surface. At B205, only one of three instruments in the borehole, a tiltmeter, was replaceable.

While we work to prevent equipment failures by foreseeing problems, hardening station hardware and learning from experience, we continue to be challenged by the elements and factors both foreseen and new. These challenges, however, are what keep the job interesting, and Yellowstone is never a bad place to visit, regardless of the time of year. These data, collected continuously, allow us to better understand Yellowstone's vast volcanic system and the pressures that cause the greatest hazard in the region — earthquakes. By keeping the data flowing, lessons learned at Yellowstone, one of the best-instrumented calderas in the world, can then be applied at other volcanoes around the globe.

Read more about UNAVCO and the deformation network in the April 9 edition of Yellowstone Caldera Chronicles.

Fifteen years changes a lot when it comes to backpacking, probably most significantly the person doing the backpacking.

Get outside: Rocky route south of Red Lodge turns back all but the brave

People were walking up the road rather than risk ruin to their vehicles. Others who had started driving up the road turned around once they realized how rocky the route was.

A 31-mile water route up Idaho's Lake Pend Oreille stood out to stand-up paddleboarder Jason Hershey as a challenge reminiscent of the Hawaiian Islands where he used to live, work and play.

Fishing report: Trout action heats up on the Gallatin

Check out the hot spots this week.

When his annual ultramarathon races were canceled because of COVID-19, Helena engineer Branden Joy set out to create his own extreme challenge — bagging 50 of the Beartooth Mountains' tallest peaks in one prolonged outing.

The injuries Branden Joy suffered were painful, pestering and disheartening.

Six West Yellowstone winter guides have settled an unfair labor practice complaint. Four of the guides were fired in February by their bosses at Delaware North for protests regarding working conditions as they attempted to unionize.

UNAVCO field engineer Dylan Cembalski replaces damaged antennas on the communications tower at Sawtell Peak. The tower is shared by multiple groups that use this regional high point to relay data.

GPS station P361, on Sawtell Peak, is shown on a clear day. Electrical storms destroyed multiple antennas, including the GPS antenna — here under a protective plastic dome — and three communications antennas on the tower. Data from P361, along with data from other stations in the Yellowstone region, are sent to UNAVCO for free and open distribution.