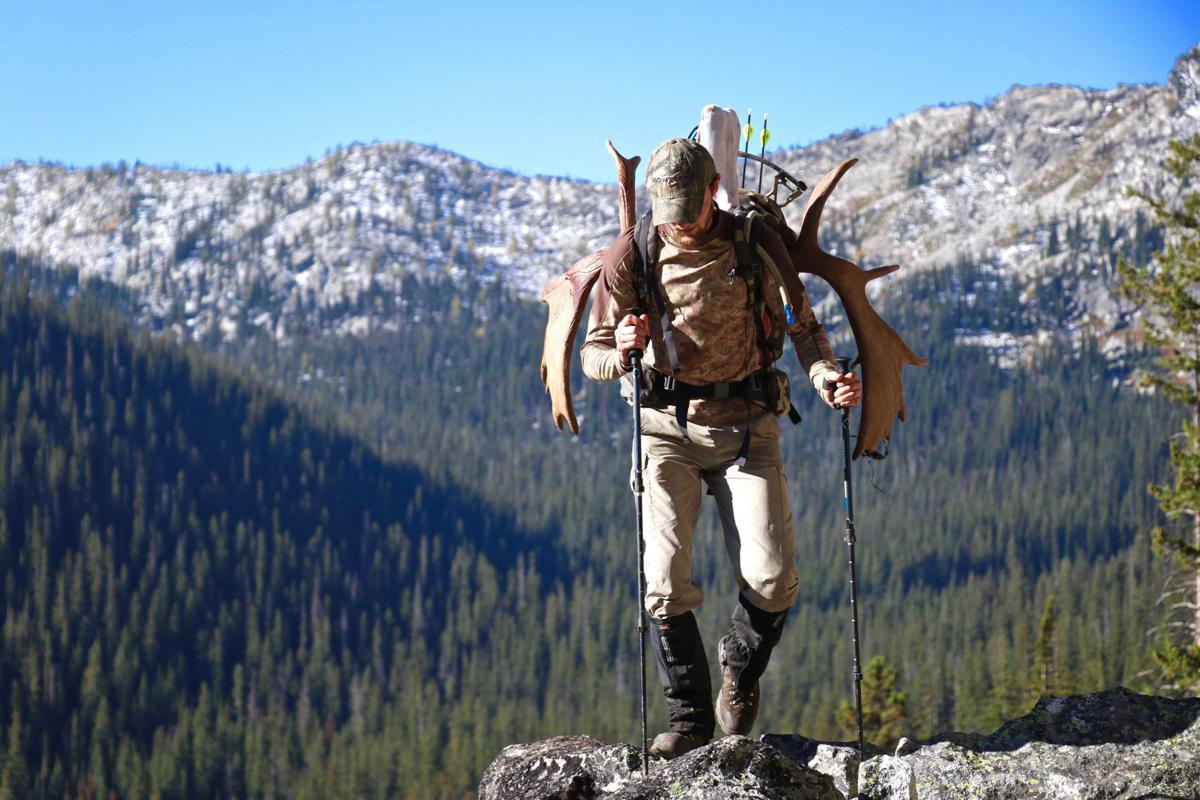 Alec Underwood packs out the final load from a successful 2017 moose hunt in the Bitterroot Mountains. About 20,000 people apply for fewer than 375 moose hunting permits annually in Montana. 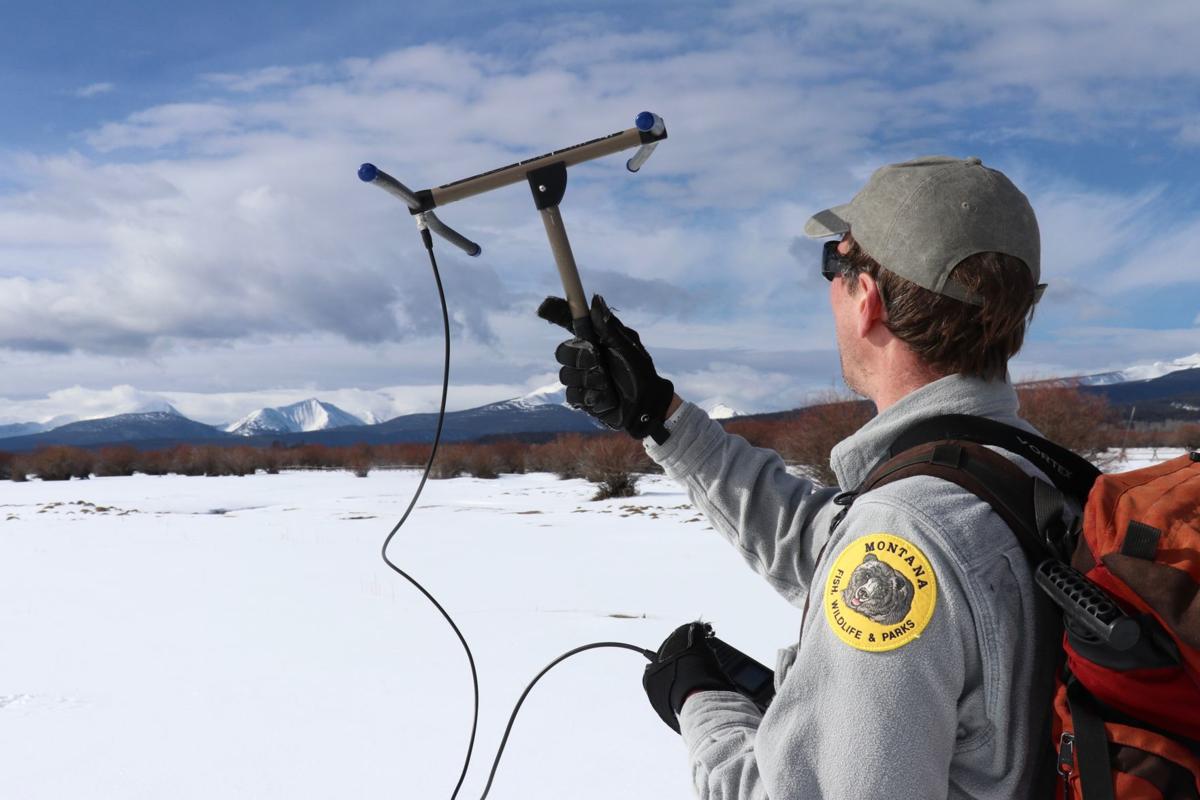 Montana Fish, Wildlife & Parks moose specialist Nick DeCesare searches for a signal of radio-collared moose in the Big Hole Valley during a winter field trip in 2017. FWP is halfway through a 10-year research project on moose populations in three regions of Montana. 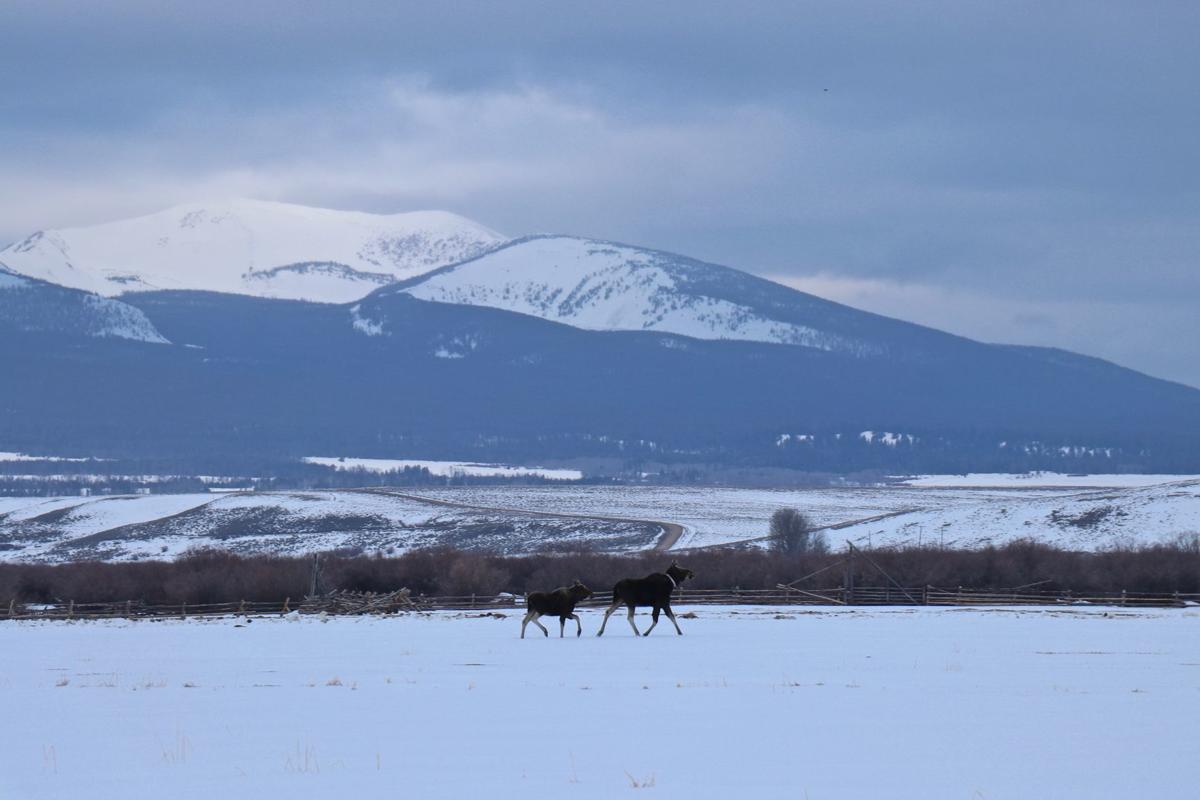 Two moose move across a ranch pasture in the Big Hole Valley in 2017. Moose populations are stable or declining in several parts of Montana, but researchers are uncertain what kinds of disease or predation factors have the greatest impact.

Alec Underwood packs out the final load from a successful 2017 moose hunt in the Bitterroot Mountains. About 20,000 people apply for fewer than 375 moose hunting permits annually in Montana.

Montana Fish, Wildlife & Parks moose specialist Nick DeCesare searches for a signal of radio-collared moose in the Big Hole Valley during a winter field trip in 2017. FWP is halfway through a 10-year research project on moose populations in three regions of Montana.

Two moose move across a ranch pasture in the Big Hole Valley in 2017. Moose populations are stable or declining in several parts of Montana, but researchers are uncertain what kinds of disease or predation factors have the greatest impact.

When Alec Underwood won the lottery to hunt moose in Montana last year, he got a lot more than a permit to tape around the antler.

“The tag now comes with a kit,” Underwood said. “There’s the needle for taking a fat sample and instructions for removing a tooth. Drawing that tag really spurred me to learn more about what I was hunting.”

In Montana, about 20,000 people apply for the 350 moose tags released every hunting season. About three-quarters of those get their quarry, testament to the dedication required to kill a moose. Fewer than one in 10 deer and elk hunters typically fill their tags each fall.

“It’s nice working on an animal that most people like,” DeCesare said.

Most other big game animals have their share of controversy: Deer raid haystacks and gardens, elk damage cattle fences, wolves and mountain lions affect deer and elk populations. Moose are too rare to have much impact on other activities. The one exception is their unruly attitude toward people — the few who encounter one on a trail often report getting charged or treed by bad-tempered, 800-pound ungulates.

Conditions for moose vary widely across North America. In New England states, winter ticks have literally sucked the blood out of the population, killing about 70 percent of each year’s calves. On Lake Superior’s Isle Royale, a plunge in the wolf population to just two predators has produced a 16 percent annual growth rate in the moose numbers, now estimated at 1,475. Minnesota’s statewide population has dropped 65 percent between 2006 and 2018.

In Montana, three different trends appear. On the Rocky Mountain Front, ticks have caused many moose to lose much of their winter fur. But confoundingly, those moose also have the state’s highest rate of twin calf production and appear generally healthy. In the Cabinet Mountains of northwest Montana, the population is stable but has poor calf recruitment. And in the Big Hole region of southwest Montana, a parasite disease seems to be pushing a slow population decline.

Overall, the state's moose permit offerings have fallen from 800 a decade ago to 350 now. The research project, which depends greatly on the drawing fees from that moose permit lottery, has allowed DeCesare to put tracking collars on 30 moose in each of those three regions. The collars cost between $280 for a radio-beacon version to $700 for a satellite-connected GPS monitor that records precise locations twice a day and can send text-messages when the animal dies.

“You can’t reliably fly moose like you can to count elk,” DeCesare said. “We have to be more nuanced. It’s not like you count 2,000 elk one year and then see a change down to 1,700. With moose, you might see 80 and then it goes down to 75. Is that a change in population or a good or bad flight?”

Hunting applicants must put in for specific districts. Underwood’s first choice was a wilderness area in the Bitterroot Mountains that required a long day’s horse ride just to reach base camp. He’d helped a buddy, Will Schreck, pack out a moose from that area a few years previously. Schreck had moved on to a wildlife agency job in Alaska. Nevertheless, when Underwood phoned with news of his tag, Schreck said he’d be down to help with the hunt.

Underwood started scouting the area shortly after he received his permit in June. He spent two weekends clearing a little-used trail of deadfall so horses could use it later. Throughout the smoke-filled summer he never saw another boot track.

When Schreck arrived, so did the snow and rain. Underwood got a fever in camp that had him laying outside his sleeping bag on 28-degree nights.

“Morale was down,” Underwood said. “We were soaked every day. Everything was big ferns, wet vegetation. We were bushwhacking through alder and ash bushes five to seven miles a day. We were exhausted.”

On the fourth day the sun came out. Schreck moved up the drainage to glass while Underwood punched through a thicket that required five minutes to move 100 yards. He was making half-hearted moose cow calls when he suddenly got a return call.

“It was a really weird long note,” Underwood said. “I had this sawed-off canoe paddle to rake the trees, and I started hitting the trunks. Did I say I was bowhunting?”

Underwood had abandoned his rifle for a bow for the moose attempt, and there was an antler poking out of the alder branches. The bull was grunting — OOO-Ruff — and looking around for competition. Underwood nocked an arrow and started crashing through the brush, swinging his paddle handle and grunting back.

“He’s hearing me come down like another moose, and he grunts again,” Underwood said. “I got about halfway down the alder chute and he came out in the open, a couple hundred yards away. He was walking away from me, but we’re grunting back and forth and I’m rubbing the paddle on the trees. And then he turns and starts coming up the slope.”

The moose was 30 yards away, then 20, but Underwood had no shot through the tangle of alder branches. He saw a flat-topped rock a few steps to his left. The moose was thrashing a tree with its antlers. Underwood threw his paddle to the ground, took five steps to stand on the rock, and released his arrow from 10 yards away.

“The arrow went all the way through,” Underwood said. “He ran above me about 12 yards and stopped, and I looked down and realized I already had another arrow on the string. I don’t remember ever drawing it out. I took the second shot, and he got wobbly and then crashed behind some bushes.”

Underwood knew the moose was dead, but he didn’t approach it until Schreck came back from his scouting position.

“It’s a special moment when you take an animal,” Underwood said. “Will was with me the whole hunt, but he missed the whole hunt. This was my first time, and I wanted to walk up together with him.”

Companionship matters more than ever on a moose hunt. Approaching the carcass, Underwood became aware how much bigger it was than the bull elk he’d bagged before. It was 5:30 p.m., they were two miles from camp and the temperature was dropping fast.

“We started a marathon of packing meat,” he said. “We didn’t get the first load back to camp until 1 a.m.”

They’d seen a black bear earlier in the hunt, so what meat they couldn’t get out that night they hung from nearby trees. They got a message out to another friend to bring the horses back. The next day, each man ferried two more loads of meat to the rendezvous. Each round trip was about 5 miles. Then they had to break camp.

“Seeing those horses was an amazing sight,” Underwood said. “We knew we’d get the meat out. After being sick and then hauling 100-pound loads, you’re kind of on autopilot.”

He ended up filling a 7-cubic-foot freezer with moose meat, as well as all the available space in his kitchen refrigerator.

“A lot of people try to make it easier on themselves when they hunt,” Underwood said. “I could have got that moose at 200 yards with a rifle. But I don’t think it had ever seen another human before. Nothing can get you that experience unless you work at it.”

How much coffee trivia do you know?