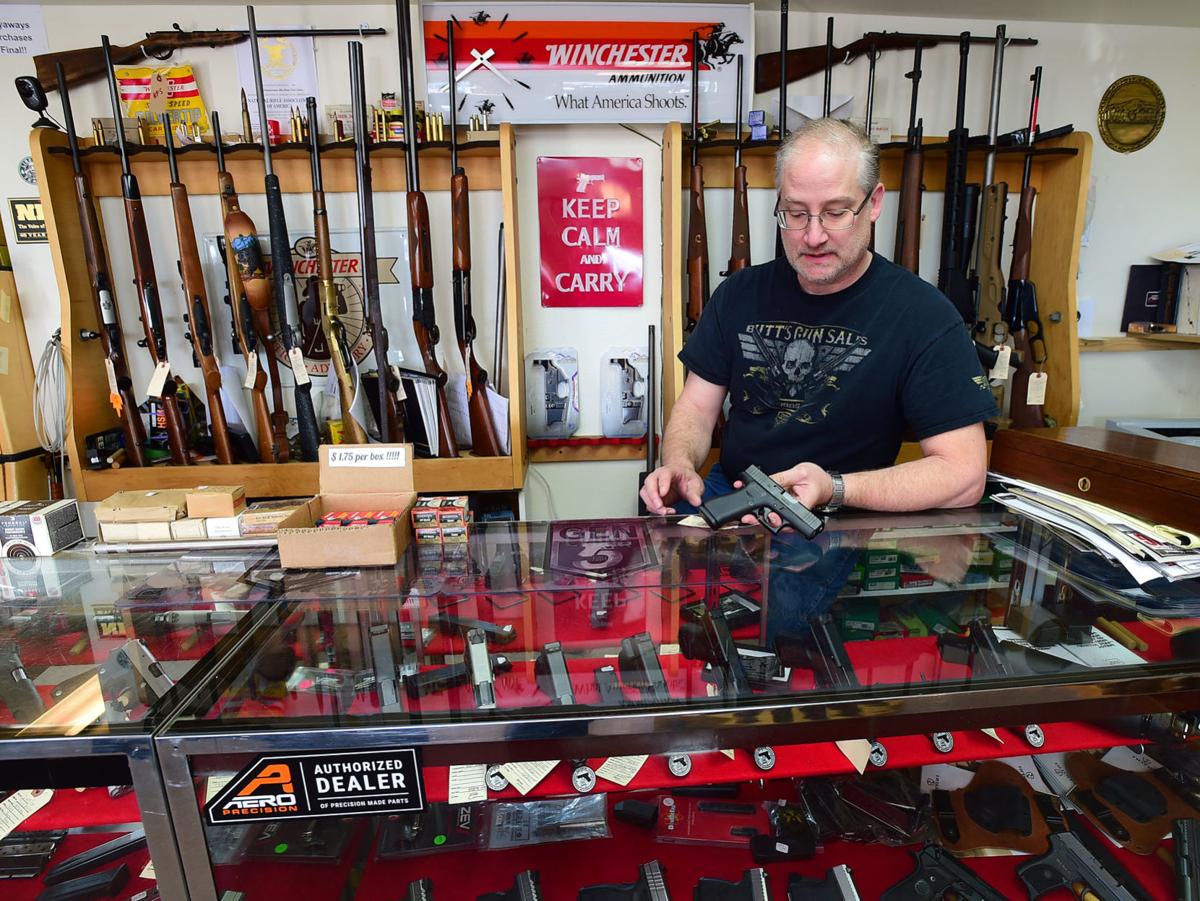 Matt Zimmerman, owner of Butt's Gun Sales in the Billings Heights, has guns on hand but ammunition is running low as people hoard shells out of self-defense concerns. 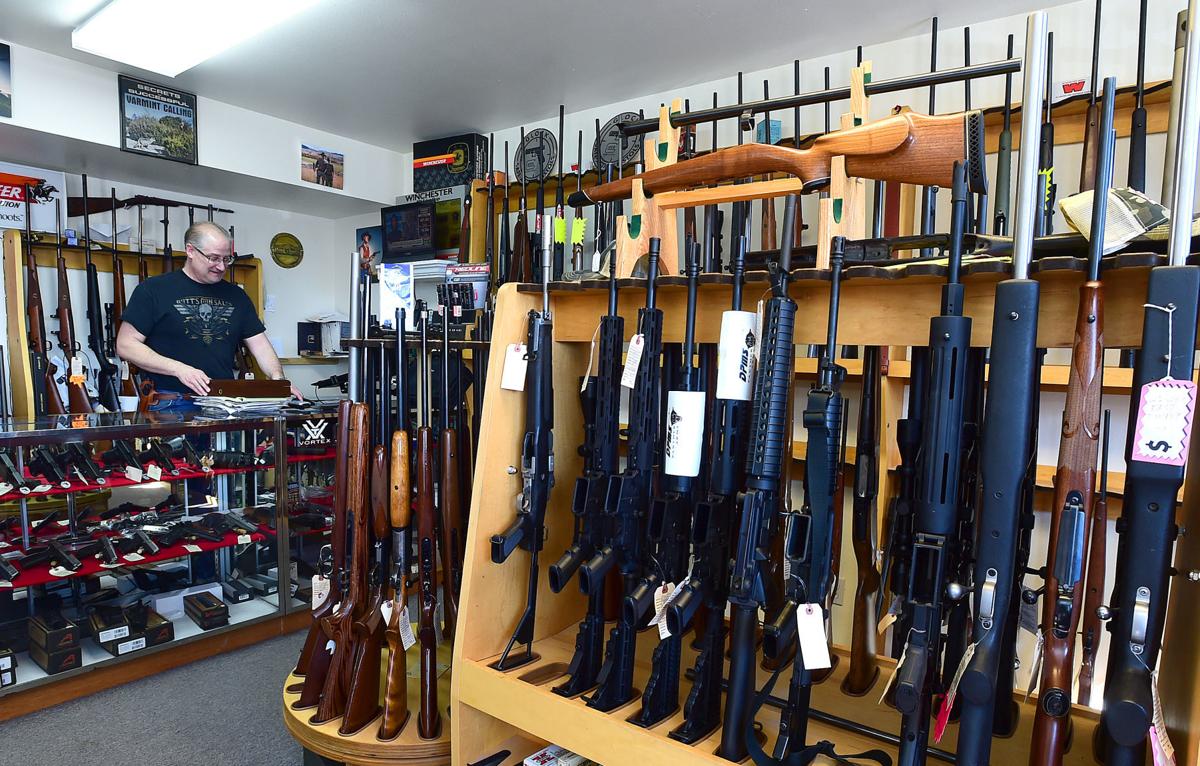 Matt Zimmerman, owner of Butt's Gun Sales, has seen many new faces coming to his Heights store to buy guns due to the coronavirus pandemic.

Firearms and ammunition often used for self-defense are flying off the shelves of Montana sporting goods and firearm stores, as well as similar retailers across the nation.

Some of Matt Zimmerman’s customers at Butt’s Gun Sales in the Billings Heights are first-time buyers alarmed by the new coronavirus outbreak and looking to protect themselves against possible looters, he said.

“Calmer heads have to prevail,” Zimmerman said. “It’s not like you’re going to shoot your 80-year-old neighbor over toilet paper.”

Marbut said he’s called stores around the state and heard that at some shops up to half of the customers may be first-time buyers.

Montana already has strong gun ownership because of the popularity of hunting, ranking sixth in the nation according to one poll. More than half of households own at least one gun according to another survey. That may explain why current sales seem more targeted at weapons and ammunition for self-defense.

Similar runs on firearms and ammunition have occurred in Michigan, California, Kentucky and Illinois, according to news stories. Such buying sprees come at the same time that stocks of toilet paper, disinfectants and food staples are being sold out.

“The news has done a good job of getting people excited right now,” Zimmerman said.

In 2014 there was a run on sales of .22 ammunition, a small caliber used for target shooting or varmint hunting. The fact that supplies of .22 shells haven’t diminished in the wake of the COVID-19 outbreak “maybe tells us something about the psychology of the people who are buying,” Marbut said, noting that .22 loads aren’t a self-defense round.

Beall said his store was fortunate to have a large stockpile of 9mm ammunition for an upcoming 50th anniversary promotion. Most of that is now gone.

“The manufacturers are shipping orders,” he said, “but the distributor supply line is pretty cleaned out.”

That’s what Zimmerman ran into, an inability to resupply his small store.

MidwayUSA, an online ammunition and arms superstore based in Missouri, posted a note to its customers saying “order volume has increased dramatically” and that quantity limits were placed “on many high demand products to allow as many customers as possible the opportunity to order them.”

Likewise Ammunition Depot posted on its website that it was out of ammunition for several popular calibers “due to unprecedented demand. Truckloads of ammo are coming in everyday, but are selling out very quickly. We expect the current situation to persist for several months.”

“The problem now is the supply chain has been sucked dry,” Zimmerman said.

That means he may have to wait up to 30 days for resupplies of common ammunition like 9mm for handguns and .223 for rifles. He’s also sold all of his double-aught buckshot, large shotgun pellets sometimes used by hunting guides to defend against grizzly bear attacks, or, as Marbut pointed out, for self-defense.

Zimmerman has also been frustrated by long delays getting federal background checks on firearm purchasers. He was put on hold for eight hours during one transaction.

Those checks are done by the FBI, which said information on the increase in background checks would not be available for March until next month. Some news reports said the agency had seen a 300% increase in requests at a time when some staff may have been told to stay home because of the coronavirus pandemic.

According to one of the agency’s media contacts, "At this time, the FBI’s National Instant Criminal Background Check System (NICS) Section remains fully operational and will continue to process requests. The NICS Section appreciates the public's patience during this period of national emergency."

In Illinois, where the state police do background checks on firearm sales, the agency reported 19,000 inquiries over five days beginning on March 13.

The situation has frustrated Zimmerman because sales were strong for a week but now he’s out of some products, meaning fewer transactions for his store until he gets resupplied.

“I was around when Sandy Hook (mass shooting at an elementary school) happened, and there was not such a massive clearance out of the entire system,” he said.

Montana Fish, Wildlife and Parks Region 6 game wardens are seeking information regarding two bull elk that were found shot and left to waste approximately two and a half miles southwest of Cleveland in Blaine County, just off Peoples Creek Road.

Shame came in the form of wet clay.

Three Montana grizzly bear cubs that were orphaned in April have found a new home.

As Yellowstone and other national parks end a two-month shutdown due to the coronavirus, park officials are asking visitors to take simple precautions.

With no fanfare or even much public notice, Yellowstone National Park has opened its North Entrance at Gardiner to motorists traveling to Silver Gate, Cooke City or beyond.

Despite their size, cunning and fearsome reputation, there are a lot of things that can befall grizzly bears as they negotiate the perils of nature.

Person dies at Natural Bridge Falls after falling into water

One person is presumed dead after falling into the Boulder River near Natural Bridge Falls, a popular recreation site south of Big Timber.

Yellowstone fishing season opens May 23; no licenses available in park

The fishing season opened on Saturday in Yellowstone National Park, but anglers will have to purchase their licenses at stores outside the park.

Rain has made fishing conditions tough across the state. Water flows have risen and clarity has been compromised.

Matt Zimmerman, owner of Butt's Gun Sales in the Billings Heights, has guns on hand but ammunition is running low as people hoard shells out of self-defense concerns.

Matt Zimmerman, owner of Butt's Gun Sales, has seen many new faces coming to his Heights store to buy guns due to the coronavirus pandemic.