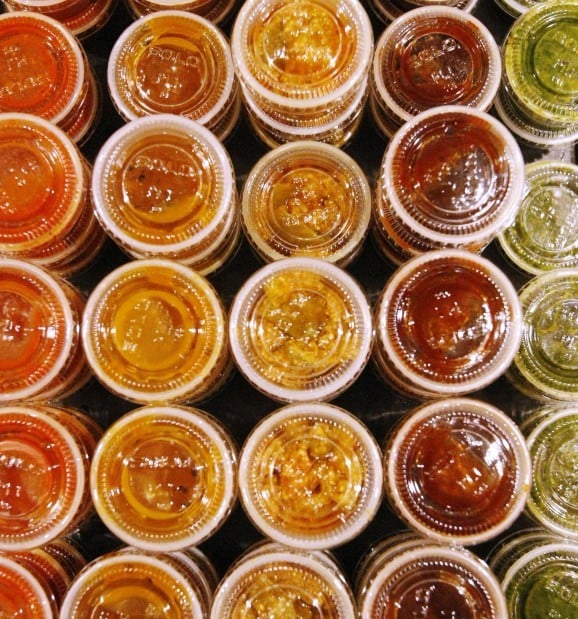 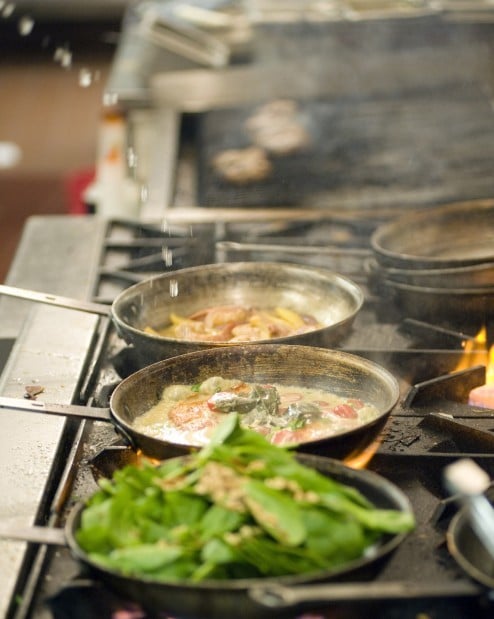 AP photo | This photo shows a busy kitchen at the new restaurant Om, an Indian restaurant in Minneapolis Minn. 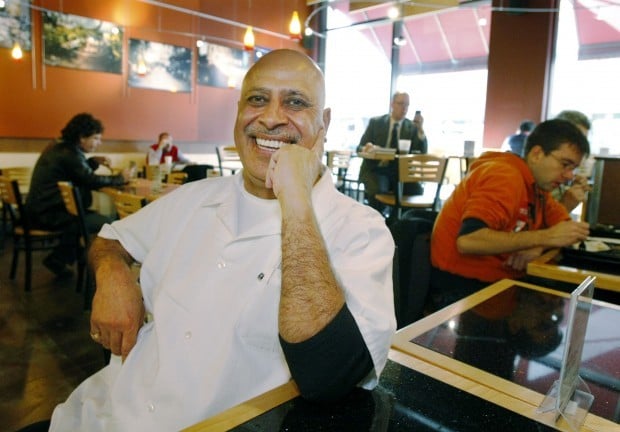 AP photo | Vijay Puniani, owner of Chutney Joe's Indian Diner in Chicago, is betting that Indian food will be the next big thing. He plans to open a chain of Indian restaurants.

NEW YORK — Indian food in America is having its “Slumdog Millionaire” moment.

Supermarket shelves are lined with chutneys, pickles and sauces and all manner of boxed heat-and-serve Indian meals. The quality and number of Indian restaurants has soared, offering an alternative to cheap all-you-can-eat buffets. And a flurry of new cookbooks is introducing home cooks to subtle regional differences in Indian cuisine shaped by climate, geography, religion and caste.

In Chicago, Indian businessman Vijay Puniani is betting Indian food will be the next big thing. After studying the success of Chipotle, Puniani opened the first in what he says will be a chain of “fast-casual” Indian restaurants modeled after the popular Mexican eatery.

Chutney Joe’s, which opened in downtown Chicago in February 2009, features the sleek, minimalist decor of Chipotle — warmed up with orange walls — and a similarly simple menu. For $5.99, diners choose one of four meat or four vegetarian entrees accompanied by rice or the thin flatbread naan. Condiments to spice up or cool down the dishes are free.

Puniani says the Indian-Pakistani population of Chicago comprises just 15 percent to 20 percent of the store’s customers.

“We look at Main Street, America as our customer base,” he says, adding that menu items were adapted after focus groups revealed that many people in the U.S. consider Indian food too spicy and heavy. For instance, the popular dumplings known as samosas are baked instead of deep-fried, and cream and butter, two staples of Indian cooking, have been banished from the menu.

The growing awareness of Indian culture and cuisine is due to the big influx of immigrants from South Asia since 1965, when national origin quotas favoring Europeans were abolished.

Since then, the United States has witnessed a remarkable flowering of Indian talent, energy and drive as well as a seemingly insatiable appetite for all things Indian, including bhangra music, Bollywood films and yoga. Perhaps nothing expresses America’s fascination with that giant emerging economy more than the runaway success of the British film “Slumdog Millionaire,” a rags-to-riches tale based in the Mumbai slums that won eight Academy Awards in 2009.

The growing Indian presence also comes at a time when the popularity of cooking shows — including Bravo’s “Top Chef,” hosted by Indian actress and model Padma Lakshmi — and an increase in foreign travel have made Americans more adventurous eaters.

“The American palate is no longer bland,” says Andrew F. Smith, editor of the Oxford Encyclopedia of Food and Drink of America, who predicts that Indian food will take off in the next decade the way sushi bars did in the 1980s and Thai food did in the ’90s.

A September 2009 survey of ethnic food by the market research group Mintel found that the fastest growing segment was Indian food, with sales increasing nearly 35 percent from 2006 to 2008. While Indian food’s overall share of the $2.2 billion ethnic food market still is tiny — $40 million in 2009 compared to $1.4 billion in Mexican/Hispanic foods — Mintel says the Asian (mostly Chinese) and Indian food segments are driving the growth.

New York, the dining capital of the nation, has seen an explosion in the number of Indian restaurants in recent years. New York University sociologist and food studies scholar

Krishnendu Ray counts some 350 Indian restaurants today compared to the 19 listed in the 1978 edition of a restaurant guide. At the top of the market are a small group of stylish, cosmopolitan restaurants like Tamarind, Devi and Tabla, which received three stars from The New York Times soon after it opened.

The glowing review — “It was love at first bite,” it reads — is a far cry from an 1876 article in the Times that judged curry to be “a good thing in its time and place” but one that “still rather deserves the epithet of barbaric.”

Fancy Indian food has made inroads in other cities, too. Raghavan Iyer, author of the well-received Indian cookbook “660 Curries,” recently helped launch the upscale restaurant Om in Minneapolis, which features traditional Indian dishes like pork vindaloo and roghan josh (lamb curry) interpreted for an American audience.

While Iyer is amazed at how much more available Indian products have become since he emigrated here in 1982, he says America still has a ways to go in terms of really understanding Indian food.

“People associate hot with spicy and to me they’re two different things,” he says. “It’s a question of educating the American audience. If Thai food can be considered mainstream, I don’t think Indian cooking can be that far behind.”

Part of the allure is the supposed health benefits of Indian food, especially spices like turmeric, ginger, cinnamon and cayenne. Research into the antioxidant and anti-inflammatory properties of turmeric has landed it on lists of cancer-fighting foods in recent years.

Priti Chitnis Gress, editorial director for the publisher Hippocrene Books, Inc., says the company’s line of Indian cookbooks do quite well, particularly the one titled “Healthy South Indian Cooking,” and sell largely to a non-Indian audience.

“People, especially in metropolitan communities, are fairly sophisticated,” she says. “It’s not just chicken curry and rice and naan anymore.”

Across the pond, Camellia Punjabi’s cookbook “50 Great Curries of India” has sold over 1 million copies worldwide. It was recently reissued in the United States with a DVD “to take the intimidation out of cooking Indian food,” says Anja Schmidt, the New York publisher of Kyle Books, a division of London-based Kyle Cathie Ltd.

Not everyone believes that the South Indian crepes called dosas will become as ubiquitous as burritos. David Browne, a senior analyst at Mintel, says Indian food will remain an acquired taste because “the flavor profile is still a limiting factor.”

Another skeptic is Chicago-based food writer Colleen Taylor Sen, author of “Curry: A Global History.” She notes that America doesn’t have the colonial ties to India that Britain does.

It might be too early to tell, according to NYU’s Ray, who notes that while Indians are among the fastest growing ethnic groups in this country, the population of 2.7 million is still a tiny presence in a nation of more than 300 million people. Also, the bulk of the Indian immigrant population simply hasn’t been here that long.

Chicken marsala and focaccia may be household words today for tens of millions of Americans but Italians have been in the U.S. in large numbers since the late 19th century, become assimilated and moved up the social and economic ladder.

Whether ground fenugreek and coriander become flavors as familiar to Americans as basil and oregano depends in large part on whether Indians can do the same thing, according to Ray. “In 2065, Indian may be in the same place as Italian food,” he says.

Most people know beans are a frugal cook’s best friend. They are inexpensive, nutritious and filling. But many people may not realize that len…

Chutney: great condiment for many types of foods

With its sweet-and-sour, fruity and spicy flavors, chutney can be a challenging condiment to use beyond Indian cuisine. But those same flavors…

Vindaloo is a Portuguese-influenced Indian dish. Traditional versions are made mostly from chilies, spices, garlic and vinegar. For simplicity…

This thick, nutty curry from Camellia Punjabi’s cookbook “50 Great Curries of India” is made from ground spices and cashews. When grinding the…

AP photo | This photo shows a busy kitchen at the new restaurant Om, an Indian restaurant in Minneapolis Minn.

AP photo | Vijay Puniani, owner of Chutney Joe's Indian Diner in Chicago, is betting that Indian food will be the next big thing. He plans to open a chain of Indian restaurants.
© Copyright 2020 Helena Independent Record, 2222 Washington St. Helena, MT | Terms of Use | Privacy Policy
Powered by BLOX Content Management System from TownNews.com.
You don't have any notifications.