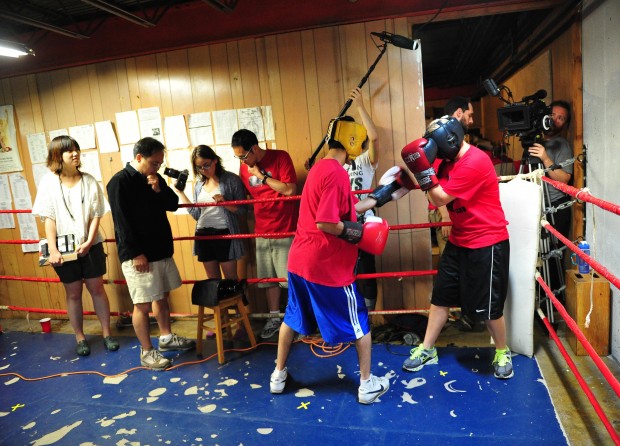 Eliza Wiley Independent Record - Crews filmed in the tight dark basement of the Eagles Lodge while shooting for thier movie 'Fighting Grace'. 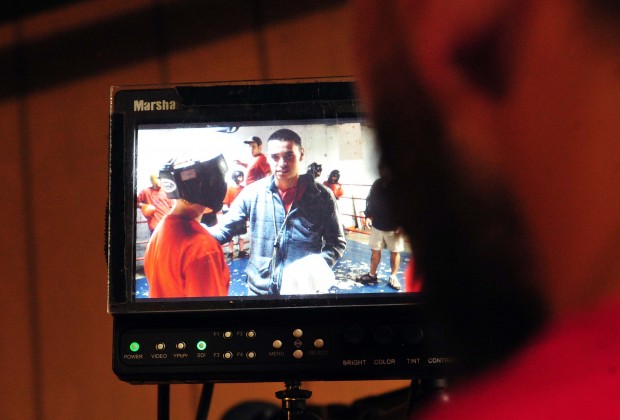 Eliza Wiley Independent Record - Duran Caferro Jr. is seen in the display of a movie camera as the cameramen set up the first scene. 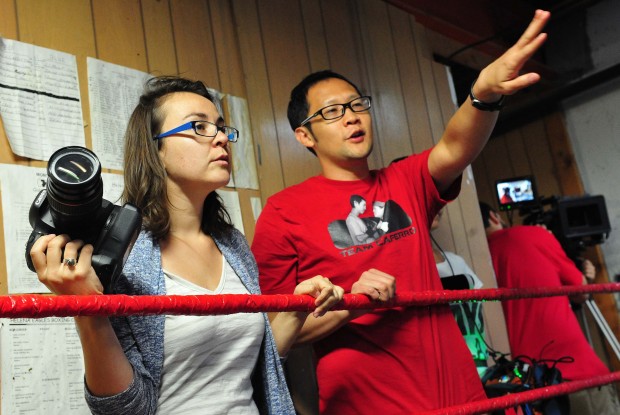 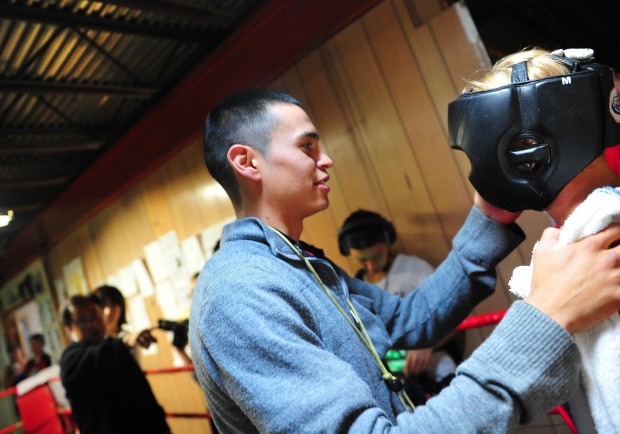 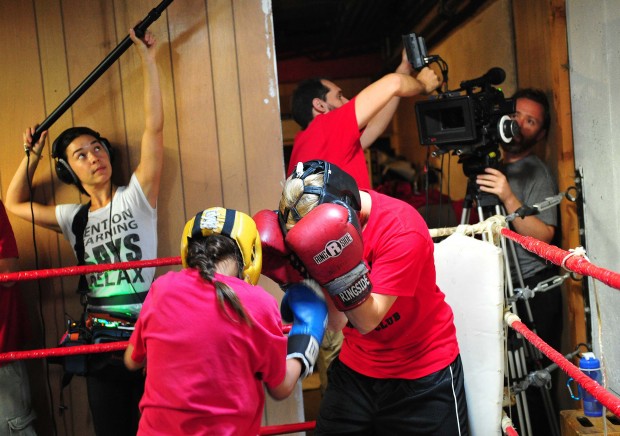 Eliza Wiley Independent Record - Laura Sinnott, a sound recordist, holds a boom microphone above the actors as they reherse their scene. 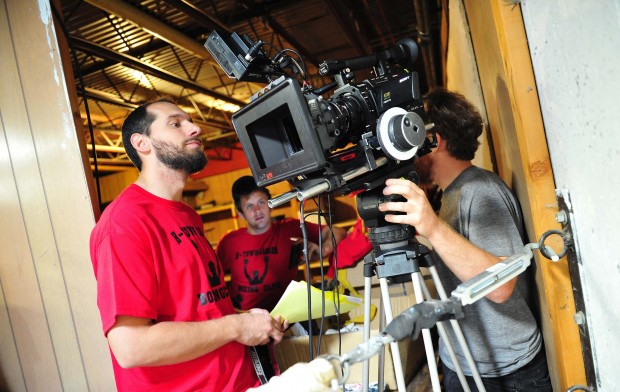 Eliza Wiley Independent Record - From left Jeremy Brunjes, Danny April, and Mike Rossetti share a confined space in the back of the boxing practice ring as they set up the shot for the opening scene of 'Fighting Grace'.

A pair of up-and-coming Helena boxers took their skills in a new direction this month, starring in a short film about boxing produced by a New York University film student.

Ariel Beck, 21, is planning to fight her first bout as a professional Aug. 18 at the Lewis and Clark Fairgrounds. Duran Caferro Jr. is slated to fight his third bout then.

But they became actors, their gym became a movie set and their gloves became props when Vincent Ma, who lives in Helena and is seeking his master’s degree from NYU, came across the gym and the boxers and came up with the movie idea starring the pair.

“It’s a blast,” said Beck after shooting a fight scene a few weeks ago. “It’s an amazing opportunity.”

Ma’s wife, Megan Harrington, is from Helena, and the pair (along with a new child) moved here late last year. Ma’s been kickboxing for about six years, he said, and always wanted to make a boxing movie.

He heard about the boxing gym in the basement of the Eagle’s Lodge, and started working out there and got to know Caferro and other boxers.

“Within a week or two, I thought, wow, this is really interesting, just in terms of the space and the people,” he said.

“Everyone on our team was real appreciative of him making the video,” he said.

Ma also shot Caferro’s first two professional fights and has been helping with marketing and publicity.

“He then told us he wanted to do his master’s thesis here in Helena,” Caferro said.

The gym at the Eagle’s Lodge bears the wear of years of boxers, with little resemblance to the kinds of fitness centers with treadmills and weight machines.

The blood on the walls is real, Caferro said. A sign says fights are won or lost in the gym. Another suggests that one’s opponent is somewhere training harder.

“Visually, I think the place is terrific,” said Ma. “It didn’t take much to get the inspiration from the gym.”

Trust on the set

Ma said in filmmaking, he likes to work with people he’s already friends with. As he got to know the local boxers, he said, his ideas for the film crystallized.

He wrote a script for “Fighting With Grace,” about a young woman trying to reach out to her estranged father, a sometime boxer, though the sport.

Boxing, Ma said, involves an unusual sort of intimacy between strangers who walk into a ring and try to punch the other person hard enough to make them lose consciousness.

“The best way to get to know someone is to go a couple of rounds with them,” he said.

And, especially when working with amateur actors, he said, trust is all-important. The actors have to be confident the director and crew will help them and keep them from situations where they feel uncomfortable, he said.

That especially held true in the shooting of “Fighting With Grace,” which took about a week. Ma, along with a crew consisting mostly of people from out of town, shot it in chronological order, which is an unusual way to do it, he said.

He also didn’t give most of the actors scripts to learn their lines ahead of time, or even tell them a lot about the direction of the story. That let them — and, in a sense, the characters they played — experience the story and react to it as it unfolded, and prevented them from getting mired in preconceived notions about what they should do.

“They didn’t know what was going to happen next,” Ma said. “That would only happen if I know them well and there’s a trust.”

As with many movies, the script changed somewhat during shooting. Beck, playing the lead role of Grace, said the crew on occasions asked her what a boxer would really say in a certain situation, to make the script sound more realistic.

“They were really great to work with, and they were all behind me,” she said.

Beck said when Ma invited her to audition for the film, she thought she might land a small role and giggled through much of the audition. So she was surprised when Ma picked her for the lead, and then set her up with a few sessions with an acting coach.

Ma described Beck’s role as physically and emotionally demanding. Not only are there intense fight scenes, but Grace also engages in a full-volume shouting match with her father.

“I think she did a great job. I think she has a future as a pretty amazing actress,” he said. “She doesn’t believe it.”

In the week before the shooting, Caferro said there was all kinds of preparation, with everyone having to get on top of their game when the shooting actually started — kind of like getting ready for fight day.

Beck said she had to keep reminding herself not to smile during the shooting.

“When in doubt, I just boxed,” she said.

In one early scene in the movie, Beck had to endure a typical training tactic — fighting off a gantlet of other boxers (in this case, smaller kids), who come at her, one after another, with as intense a rapid-fire series of punches as they can muster for a few seconds.

That took a couple of takes, as Caferro, in his role as boxing coach, egged the kids on. At the end of the battle, Beck removes her headgear, revealing for the first time to the audience it was a young woman in there.

The action was real enough so that after shooting the scene, Beck used ice packs to ease the bruises.

Caferro said he was apprehensive about acting and at the start, but benefitted from playing a character who is positive and passionate, and spends a lot of time in the movie coaching young boxers.

“As it turns out, I do that every day, so it’s not really like acting,” he said.

Beck and Caferro are now training for their fights next month at the county fairgrounds. Caferro said it will be the first time since 1996 that there have been professional fights in Helena, and it is expected to feature seven fights in all.

His fight (he’s 2-0, with two knockouts) will go either four or six rounds — that’s still in negotiation, he said — but he’s in condition to handle six.

When it’s finished, Ma hopes it will get seen in various festivals. He plans on a local showing at some point.

Caferro said he originally got involved with the movie mainly as a favor to Ma, in return for all the help he had given the boxers. But once it got going, he got excited and put in his best effort. And it was a valuable experience for the boxers and other actors, he said, most of whom may otherwise never experience movie-making so closely.

“I’m real excited about seeing the final product and real confident it will be great,” he said. “I hope it looks really real, because it is real.”

Attention, parents: Your child could be new Gerber baby

Putting the hell in Hell Creek: State and marina owners tangled in disputes

Happy Presidents Day! Here's a look at the drinking habits of each commander-in-chief.

With much of the country experiencing cold temperatures this week, it looks like some special precautions are in order.

Several states require high school students to pass a civics test in order to graduate. Which got us to thinking — how difficult would these questions be? In order to become a naturalized citizen, applicants must correctly answer 6 of 10 questions from the list of 100 questions. Here is a sampling of some of those questions. We re-worded them a bit — test yourself!

Three Georgia brothers age 5 and under diagnosed with same cancer

Angie Rush lost her left eye to retinoblastoma when she was 6 weeks old. Now all three of her young sons have been diagnosed with this form of cancer.

The Forest Service has listed four areas in Montana as high priority for public access — two in the Custer Gallatin National Forest and one each in the Beaverhead-Deerlodge and Flathead forests.

Amazon shoppers like these earbuds better than Apple AirPods

The best part? They'll actually stay in your ears.

Eliza Wiley Independent Record - Crews filmed in the tight dark basement of the Eagles Lodge while shooting for thier movie 'Fighting Grace'.

Eliza Wiley Independent Record - Duran Caferro Jr. is seen in the display of a movie camera as the cameramen set up the first scene.

Eliza Wiley Independent Record - Laura Sinnott, a sound recordist, holds a boom microphone above the actors as they reherse their scene.

Eliza Wiley Independent Record - From left Jeremy Brunjes, Danny April, and Mike Rossetti share a confined space in the back of the boxing practice ring as they set up the shot for the opening scene of 'Fighting Grace'.