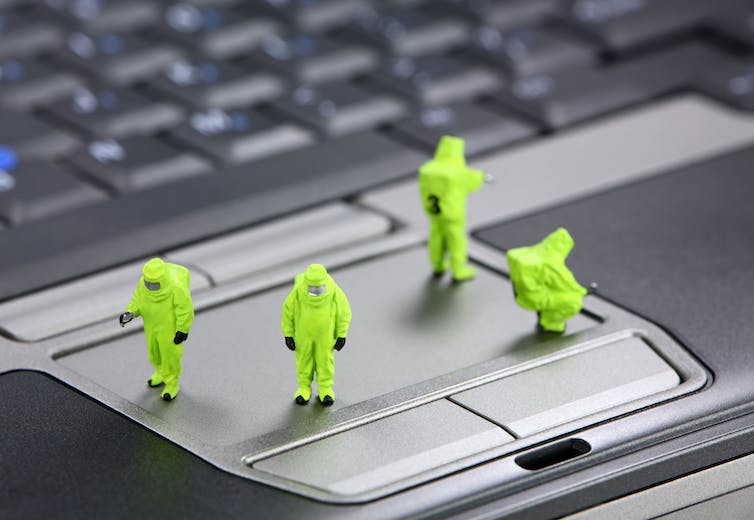 What dangerous experiences lurk behind the use of this trackpad? Amy Walters/Shutterstock.com

As technologies change, so does the advice security experts give for how to best stay safe. As 2019 begins, I’ve pulled together a short list of suggestions for keeping your digital life secure and free of manipulative disinformation.

1. Set your boundaries and stick to them

As part of my research, I’ve recently been speaking with a number of sex workers in Europe about their digital security and privacy. One consistent thing I’ve heard from them is, “The best way to stay safe is to set boundaries.” Decide – on your own, and in advance – what data you’re willing to share with apps and online services, and stick to those limits.

That way, when the latest new app asks you for a permission that oversteps what you’re willing to share, you’ll be more prepared to answer. Also set limits on the online discussions you’re willing to participate in; bow out when a discussion is hurting more than helping you. It’s even useful to set boundaries for how much time you’re willing to spend on digital security – which could be an endless task.

People who get their news primarily – or exclusively – from social media are subjecting themselves to the whims of the algorithms that decide what to display to each user.

Because of how these algorithms work, those people are likely to see articles only from news sources they already like and tend to agree with. This isolation from people with other views, and from evidence that might challenge particular perspectives, contributes to unprecedented levels of partisanship and disagreement in modern society.

Free online tools like AllSides and Purple Feed are some places that show news reports and social media posts from differing political perspectives, and identify information that’s generally agreed upon across the political spectrum.

The biggest threat to password security is no longer the strength of your passwords but the fact that many people reuse the same passwords for all, or many, of their accounts. Researchers are busy designing notifications to tell you when one of these reused passwords has been leaked to the world, but it’s safer to use different passwords, especially for your most valuable accounts.

You can use password manager software. Or, use the original low-tech method, writing your passwords down on paper. Believe it or not, it’s much safer to write them down than reuse the same password everywhere. Of course, this is true only if you’re sure the people you live with or frequent visitors to your home won’t try to get into your accounts.

Adding an additional step for logging in to your most important social media, email and financial accounts can add lots of protection. Multi-factor authentication systems are best known for texting you a six-digit code to type in as part of your login process. While any multi-factor authentication is better than none, text messages can fairly easily be intercepted or spied on. An even safer route is to use a special code-generating app on your phone.

People who change phones or SIM cards often, or who want additional protection, might consider using a physical key that plugs into your computer to authorize a login. They can take a bit more time to set up initially, but then work much faster than most other methods.

5. Delete apps you don’t use

Smartphone apps track where you are very closely, and share your location data with advertising and marketing companies.

Just carrying a phone in your pocket can give tracking companies clues to where you go and how long you stay, and technical details about your phone can offer clues to your identity.

If you don’t use an app anymore, uninstall it from your phone. If you need it again, you can always reinstall it quickly – but in the meantime, it won’t be tracking you around the world and around the web.

6. Keep the apps you do use up-to-date

Software companies don’t always know about all the vulnerabilities in their programs – and when they issue updates users don’t always know if they’re fixing a major problem or something minor. The top piece of advice experts give is to keep your software up-to-date on your computers and your mobile devices.

Having spent 2018 worrying about how hackers, corporate executives and hurried programmers might be trying to exploit your data and your cognitive and digital vulnerabilities, resolve to be more secure in 2019.

Putting the hell in Hell Creek: State and marina owners tangled in disputes

Happy Presidents Day! Here's a look at the drinking habits of each commander-in-chief.

GREAT FALLS — Montana Fish, Wildlife and Parks officials have been confronted over the past several months with a recurring problem of graffiti at numerous parks and recreational facilities around Cascade County.

Several states require high school students to pass a civics test in order to graduate. Which got us to thinking — how difficult would these questions be? In order to become a naturalized citizen, applicants must correctly answer 6 of 10 questions from the list of 100 questions. Here is a sampling of some of those questions. We re-worded them a bit — test yourself!

The Forest Service has listed four areas in Montana as high priority for public access — two in the Custer Gallatin National Forest and one each in the Beaverhead-Deerlodge and Flathead forests.

Amazon shoppers like these earbuds better than Apple AirPods

The best part? They'll actually stay in your ears.

4 ways to spruce up your bathroom before guests arrive

While you may be able to hide that messy bedroom closet from guests, you can’t hide the bathroom. Here are 4 ways to spruce up your guest bathroom before you have company.