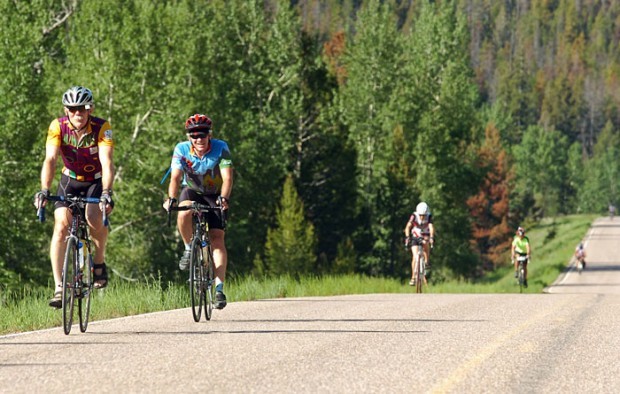 Martin Kidston Independent Record - Riders participating in Cycle America’s cross-country riding tour crossed Flesher Pass on Tuesday. Nearly 50 riders are pedaling from Seattle to Boston, while many others are riding shorter legs, including one across Montana to the Grand Tetons. 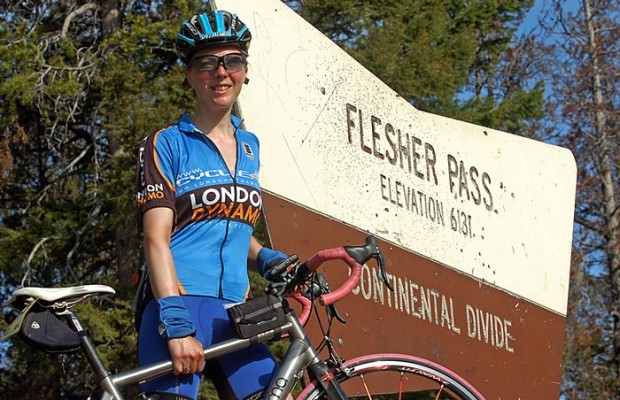 Martin Kidston Independent Record - Josephine Allen, 33, of London, is raising money for Cyclists Fighting Cancer, the CHASE hospice care for children, and the Lance Armstrong Foundation. She recently completed all eight stages of the Tour of California, is in the midst of a Seattle to Boston ride, and will finish the summer riding the Cent Cols Alpine Challenge in the French Alps.
By MARTIN J. KIDSTON Independent Record

FLESHER PASS — It’s coming up on 8 a.m. when the cyclists appear from the valley below. Their bikes shine bright in the morning sun and their cheeks are as red as the fabric in their polyester jerseys.

At the crest of the Continental Divide, they dismount their bikes to catch their breath. Just 10 days ago, they were peering out across the Pacific Ocean with the bulk of North America stretching to the east.

Now, they’re seeing the world from the top of the Continental Divide.

The Cycle America literature makes their journey sound epic, which is the experience many here are seeking. Those riding from Seattle to Boston — there are 46 of them doing so — will cross 13 states, spend 64 days on the road, peddle 75 miles per day, if not more, and cross a distance of 4,200 miles.

Others looking for a shorter but equally scenic ride can chose from nine smaller segments. They include the Northwest Sampler, the History Maker (New England) or Mission: Montana, which is the leg today’s riders are smack in the middle of completing.

“Look for elk and golden eagles in Lincoln, gateway to vast timbered wilderness areas, and pass through the capitol, Helena, the ‘Queen City of the Rockies,’ ” boasts the company’s brochure.

“Pedal past expansive working ranches to the restored mining town of Ennis,” it continues. “After a final climb to Teton Pass at 8,429 feet, your reward is a thrilling descent into Wyoming and the world-famous resort destination, Jackson. Unforgettable!”

Many will continue on from Jackson Hole, crossing Wyoming into South Dakota, where they’ll set a course through Minnesota and Wisconsin, part of the “Heartland Patchwork” tour.

They’ll tackle Michigan and Ontario, Canada, before dipping south through New York and arriving in New England by late August.

While it sounds like a daunting ride, smiles prevail here at Flesher Pass where the riders laugh while posing beside the marker announcing the summit. At 6,135 feet, the prominence represents the highest point in their ride thus far.

It is, they know, the crown of the continent.

“We’ve got a bunch of repeat offenders who have ridden with Cycle America before,” said Michael Neuser, a German native who currently lives in California. “You can make this as tough as you want or as easy as you want.”

As Neuser caught his breath, other riders gathered around, eager to tell their story. There was Terry Wiechert, from Calgary, who said it wasn’t easy keeping track of the passing days and mounting miles.

At 17, Chris Dordal, of Pennsylvania, was the ride’s youngest participant. Charles Swaney, of Columbia, Mo., marveled at the northern views, where the snowcapped peaks of the Bob Marshall Wilderness stood above the Blackfoot Valley below.

“We have a variety of people here,” said Jennifer Sallis, a Wisconsin resident who now lives in Princeton, N.J. “We’ve got a gentleman who’s 81. We’ve got a family — a mother, father and son. We’ve got high school graduates. It’s great.”

The rides are fully supported, and within 20 minutes the chase vehicle reaches the pass. But it’s from their bikes, not the van, that the riders get a rare and real glimpse of America.

It was somewhere outside Spokane, Wash., where they encountered what they described as a family nudist colony. Near Thompson Falls, they came across a family garage sale, which, among the wares, included an array of guns.

The stories pass the time until the attention shifts to the strong, lanky rider cresting the divide.

“She’d be worth waiting to talk to,” added Sallis.

The rider of interest is Josephine Allen, a 33-year-old cyclist known as “Joe” among her riding peers. Allen’s arrival at Flesher Pass marked her third trip of the morning. She rode up, then down, then up again, then back down, arriving at the peak for her third and final time.

“Why?” was the first question that came to mind?

“I fancy doing something epic,” said Allen, speaking with her British accent, which makes sense given that she hails from the U.K. and lives in London. “I’m having so much fun that I almost feel guilty raising funds.”

Dressed in riding gear promoting her sponsors, Allen is raising money for Cyclists Fighting Cancer, the CHASE hospice care for children and the Lance Armstrong Foundation.

A two-time national gold-medal winner in rowing and twice a champion in the Henley Women’s Regatta, Allen retired from rowing and took up cycling in 2008. She’s an elite member of the Club des Cingles du Mont-Ventoux, an exclusive group of riders who have climbed Mont Ventoux by all three routes.

But here, now, Allen is working on a 10,000-kilometer ride that began in California, where she completed all eight stages of the Tour of California.

With that behind her, she’s now riding from Seattle to Boston. When that’s done, she’ll head to France to complete the Cent Cols Alpine Challenge.

“This coast-to-coast ride is the second part,” she said, still possessing a surprising amount of enthusiasm. “The third part is the French Alps. I’m going to squeeze in the Burning Man Festival in between.”

Cities with the largest homes

Cities with the largest homes

In a majority opinion, the Montana Supreme Court has upheld a District Court judge’s ruling that an extension of the Mabee Road in Fergus County is not a public route.

Seven months after receiving a petition requesting a ban on motorized boats on the Boulder River near Big Timber, a new Fish and Wildlife Commission has decided the issue needs further consideration.

The states with the most (and least) expensive electricity

The increased use of renewable energy sources will pass on savings to consumers. The cost of electricity is also projected to decline in the next three decades, albeit gradually.

A cross-boundary forestry project on Red Lodge Mountain has been awarded a state grant. It's one of 14 projects given a portion of $4.5 million under the Montana Forest Action Plan.

So you're one of 533 million in the Facebook leak. What now?

Here's what users should know about how the leaked data could be used, and how to protect themselves.

After being forgotten in a desk drawer for almost 35 years, a sealed copy of the Nintendo video game Super Mario Bros. sold at auction last week for a whopping $660,000.

The states and counties with the highest rates of lung cancer

One in 16 Americans will be diagnosed with lung cancer in their lifetimes. On an annual basis, around 230,000 new lung cancer diagnoses occur in the U.S.—the equivalent of one every 2.3 minutes.

After 400+ days in Texas shelter, dog returned after one day with new owners

Rusty the dog has spent 400+ days at the Humane Society of Central Texas. His latest adoption lasted less than a day, and he was back at the shelter.

The original Legal Tender Restaurant operated from 1982 to 2006. It would change hands and names a few times before it closed.

The cities with the largest (and smallest) homes

A recent trend in slightly smaller homes that began several years ago might be reversed by the COVID-19 pandemic. As homebuyers spend more time at home, they are seeking houses with more space.

Martin Kidston Independent Record - Riders participating in Cycle America’s cross-country riding tour crossed Flesher Pass on Tuesday. Nearly 50 riders are pedaling from Seattle to Boston, while many others are riding shorter legs, including one across Montana to the Grand Tetons.

Martin Kidston Independent Record - Josephine Allen, 33, of London, is raising money for Cyclists Fighting Cancer, the CHASE hospice care for children, and the Lance Armstrong Foundation. She recently completed all eight stages of the Tour of California, is in the midst of a Seattle to Boston ride, and will finish the summer riding the Cent Cols Alpine Challenge in the French Alps.
© Copyright 2021 Helena Independent Record, 2222 Washington St. Helena, MT | Terms of Use | Privacy Policy
Powered by BLOX Content Management System from TownNews.com.
You don't have any notifications.