The Montana Racial Equity Project and American Civil Liberties Union of Montana announced in an open letter to Helena City Manager Rachel Harlow-Schalk that they are withdrawing from future meetings of the city's recently formed school resource officer working group unless certain changes are made.

The Helena City Commission in July directed city staff to "engage in the development of a new (memorandum of understanding) to be completed by June 30th, 2021 with Helena Public Schools" regarding the 21-year school resource officer program that uses city funding.

"Our experience at the initial Working Group meeting is that there is no interest in such a robust discussion and that the decision to keep the existing model of SROs in schools has already been made," the ACLU of Montana's Tuesday letter states. 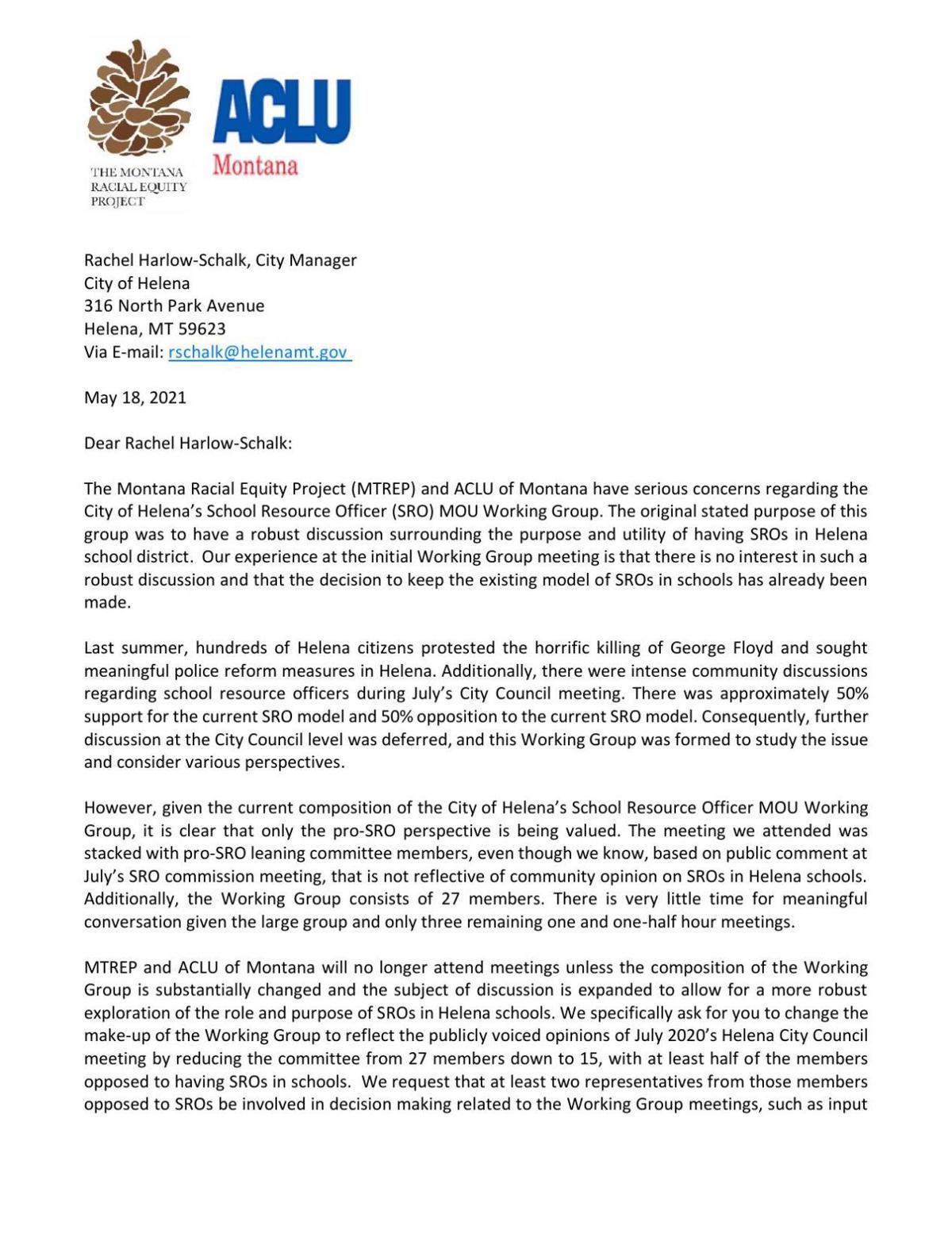 In January, Harlow-Schalk recommended the formation of that working group. City staff then compiled a list of "stakeholder" organizations and individuals they believe should participate in the group that included the Montana Racial Equity Project and ACLU of Montana in addition to school district employees, mental health services representatives and students.

The eventual composition of the group did not include such stakeholders, according to ACLU of Montana Staff Attorney Akilah Lane, who attended the initial meeting on behalf of ACLU.

"The composition of the group has to be more reflective of Helena's opinion that we heard last summer," Lane said. "I see it as a failure of the city manager."

The city's moves came following a summer of unrest in 2020, when many Helena residents protested at the City-County Building and Capitol, calling for commonsense reforms to policing policies and practices. The protesters were spurred on by the murder of George Floyd by Minneapolis police officers in May of last year.

A large contingent of Helenans staged counter-protests and resident Samara Sant formed a group called "406 Back the Blue" that sold pro-law-enforcement signage.

The city commission's email inbox was inundated with hundreds of letters on both sides of the issue during the often heated month of discussion.

During that time, the city commission temporarily withheld about $300,000 from HPD's operations personnel budget while members considered doing away with the SRO program. The money was ultimately returned to HPD's budget with the caveat that the MOU be evaluated and possibly amended.

Those in favor of police reform, and particularly within the SRO program, argued that the program's four armed, uniformed officers tasked with policing the public schools are too heavily relied on to respond to mental health crises within the schools, as opposed to better trained mental health specialists.

ACLU of Montana attests in its letter that in "Helena Public Schools, BIPOC (Black and Indigenous people of color) students are disproportionately subjected to in-school suspension and out-of-school suspensions relative to their enrollment."

"(G)iven the current composition of the City of Helena's School Resource Officer MOU Working Group, it is clear that only the pro-SRO perspective is being valued," ACLU of Montana stated in its letter. "The meeting we attended was stacked with pro-SRO leaning committee members, even though we know, based on public comment at July's SRO commission meeting, that is not reflective of community opinion on SROs in Helena schools."

The letter went on to state "MTREP and ACLU of Montana will no longer attend meetings unless the composition of the Working Group is substantially changed and the subject of discussion is expanded to allow for a more robust exploration of the role and purpose of SROs in Helena schools."

Lane said that the meeting facilitator hired by the city manager banned certain topics from being discussed at future meetings, including the outright removal of SROs from schools.

Berrick Abramson of Keystone Policy Center was brought on to run the meetings. The company is based out of Keystone, Colorado, approximately 75 miles from Harlow-Schalk's former home of Arvado, Colorado. Harlow-Schalk said city staff had a difficult time finding someone to facilitate the meetings and were forced to look out of state.

Lane equated taking options such as an outright dismantling of the SRO program off the table during discussions amounts to censorship.

"We were told we were wanted on the committee, but we're essentially silenced," Lane said, also referencing MTREP's Executive Director Judith Heilman and Criminal Justice Initiative Lead Courtney Smith's participation in the group. "They want to tokenize us, have us on the committee but gagged."

Harlow-Schalk said in a Wednesday interview that she and city staff intend to work with ACLU of Montana and MTREP to come to some kind of resolution.

"The ACLU team is great," she said. "We look forward to chatting with them."

Harlow-Schalk characterized the initial meeting of the working group as a "get-to-know-you meeting" in which the 27 members introduced themselves and spoke to why they were participating in the group. It was the only one of the two meetings held so far that ACLU of Montana and MTREP representatives attended.

City Commissioner Heather O'Loughlin said in an email Wednesday that the city intends to address the concerns.

"The concerns raised by the Montana Racial Equity Project and ACLU of Montana in relation to the scope and composition of the work group are valid and should be considered by the city," O'Loughlin wrote. "I look forward to working with staff to ensure the work group, established to support the city's discussions with the school district on a future MOU that considers best practices including restorative justice and mental health response, are both meaningful and consistent with the commission's directives last summer and earlier this year."

Members of Helena's city commission expressed split opinions during a public hearing Thursday evening on withholding nearly $300,000 from the …

The Helena City Commission voted Monday to continue the city's contract providing school resource officers to its local school district until June 2021 and engage the school district over the next year on a new path forward.

On a sunny Friday evening in April, a couple hundred Helenans shuffled about the city's Sixth Ward, listening to live music, sampling some fre…

A snowstorm that moved through parts of Montana over the weekend deposited plenty of precipitation and set new low temperature records in Helena.