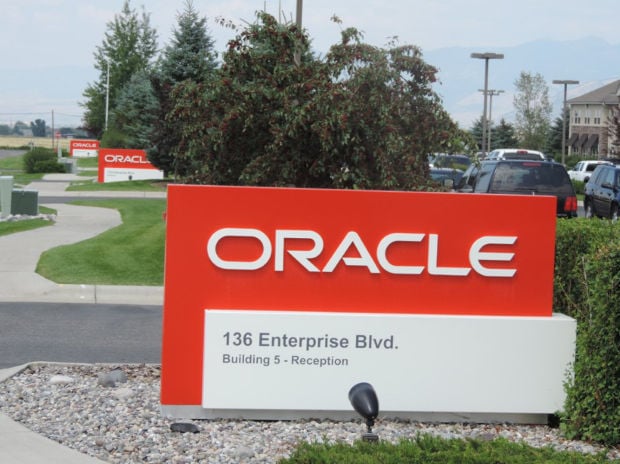 The Bozeman office buildings that housed the headquarters of RightNow Technologies, where Republican U.S. Senate candidate Steve Daines worked for 12 years as an executive, are now the Montana offices of international software giant Oracle Corp., which bought RightNow in 2012 for $1.8 billion. Daines, his father, Clair, and RightNow co-founder Greg Gianforte formed a partnership in 1999 that financed and built the complex on the southwest edge of Bozeman. 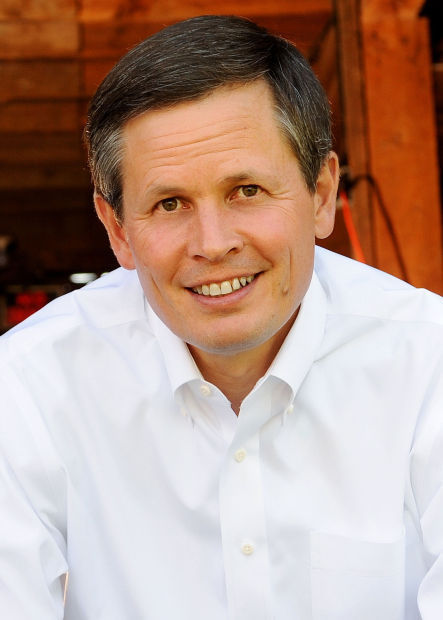 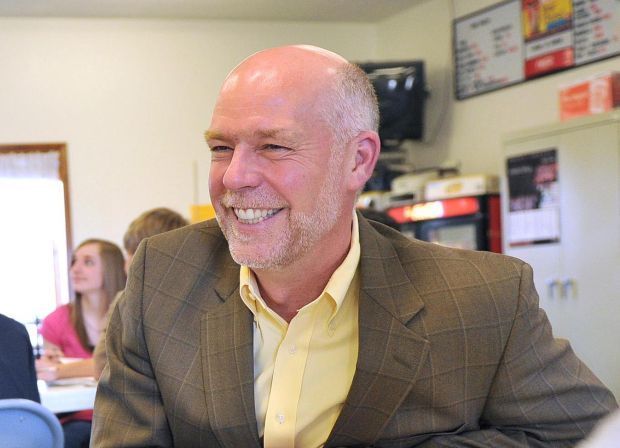 BOZEMAN -- At age 36, Steve Daines was working at his father’s construction firm in Bozeman when he got involved with a small but growing company, which had developed new customer-service software for the Internet.

The company, RightNow Technologies, had outgrown its office space in Daines’ hometown and wanted a new home to house its expanding workforce.

Daines and his father, Clair, formed a partnership in early 1999 with RightNow co-founder and president Greg Gianforte, to build the business park that became RightNow’s headquarters, on the semirural southwest edge of Bozeman.

“That was just a dirt road, running off of 19th Street,” Daines says of the since-paved Stucky Road that now fronts a cluster of office buildings and businesses.

A year after forming the partnership, Daines joined RightNow as an executive -- and 12 years later, just as he left the company, RightNow sold to software giant Oracle Corp. for $1.8 billion, making multimillionaires out of more than a dozen of its top executives and investors.

RightNow had grown from a startup in Gianforte’s Bozeman home to a company that employed 1,100 people worldwide, including 500 in Bozeman. It pioneered the concept of “cloud computing,” in which a software developer, rather than giving software to its customers for them to run, operates that software itself, for the customer firm, on its own computers and data centers.

As Daines campaigns for Montana’s now-open U.S. Senate seat, the tale of RightNow’s success has become a staple of his campaign.

Daines, Montana’s Republican U.S. representative, pitches himself as the candidate who helped grow a Montana-based company that became a major employer, supplying scores of top-paying jobs in Bozeman and bringing hundreds of millions of dollars of new wealth to the state.

Daines says that experience shapes his view of government policy, which should be judged on how it affects private-sector employment.

“It gives you an understanding of what companies have to do to grow jobs,” he says. “The incentives or disincentives that exist out there in policy today -- whether it’s tax policy, or regulations -- we had to experience it every day.”

Daines, 52, is the favorite to win Montana’s U.S. Senate seat this fall. He faces Democrat Amanda Curtis, a high school teacher from Butte, and Libertarian Roger Roots of Livingston.

Curtis just became a candidate two weeks ago, nominated by Democratic Party delegates to replace Sen. John Walsh, who withdrew from the race Aug. 7 in the wake of revelations that he plagiarized his 2007 master’s degree final paper at the U.S. Army War College.

RightNow is a bona fide Montana business success story, although it has its occasional critics, including grumblings that proceeds from the Oracle purchase flowed primarily to top executives and investors, including Daines, rather than the average worker, because of alleged less-than-generous stock options for employees. (See related story.)

Some also note that while part of Daines’s campaign theme is “less government,” RightNow was more than happy to win substantial government contracts, setting up customer-service software for the Air Force, the U.S. Social Security Administration, the Centers for Medicare and Medicaid Services and many educational institutions.

RightNow’s wider customer base includes a who’s who of the corporate world, from Wal-Mart to Nike to British Airways, and many smaller firms as well.

Daines forged a reputation at the company as a reliable, hard-working executive.

Co-workers say they found Daines to be a good listener and decision-maker with an even temperament, who routinely accomplished whatever tasks he was responsible for. As an executive, he oversaw customer service and, eventually, sales in the Pacific Rim.

Daines was recruited to RightNow by company founder Gianforte, who’d gotten to know Daines through the partnership formed with Daines’ father, Clair, and the Daines family construction company.

Daines, Gianforte and Clair Daines formed Genesis Partners, which financed and built RightNow’s new Bozeman headquarters in 1999. The company then agreed to pay the partnership about $1.2 million a year in rent for 94,000 square feet of office space.

Steve Daines owns 25 percent of the partnership and still receives a share of rent payments today. He also sold some of the Genesis lots last year.

Gianforte, a software engineer who grew up near Philadelphia, had already developed and sold a company for $10 million when he and his family moved from the Northeast to Bozeman in 1995. He says he started RightNow with the intent of bringing hundreds of high-paying jobs to his new hometown.

RightNow’s product was software programming that helped companies deal with customer interaction through the Internet.

As the Internet emerged, companies put up their websites, inviting customers to shop, ask questions and discover the business. But that exposure via the Internet brought a flood of emails and phone calls that companies weren’t always equipped to deal with, Gianforte says.

RightNow developed programming that would enable companies to give customers immediate answers to most questions, on the website, enabling firms to drastically cut their Internet support costs.

RightNow would produce a demo that a company could use on its website, as a trial run.

“They’d use it for a month, and we’d call them back, and they’d say, `You can’t take this away from me,’” recalls Gianforte. “And we’d sign a contract.”

Gianforte started the business in mid-1997 and made his first hire a few months later. Within two years, the company employed about 60 people, and was looking for new office space.

Daines, meanwhile, had been introduced by his late sister to Gianforte, and they became friends. They went to the same church, went camping together, shared the same conservative politics -- and, they’d worked together developing RightNow’s new headquarters south of town.

Gianforte says he was looking for executive talent and knew Daines had worked for Procter & Gamble in China, helping the consumer-products giant develop manufacturing sites to sell its products in China and southeast Asia.

“He’d had a lot of management experience, was an engineer and a problem-solver,” Gianforte says. “I had leadership positions open that I needed to fill. Steve fit the bill. I convinced him that this could be an interesting career move.”

Daines signed on with RightNow in 2000, as vice president for customer care, overseeing efforts to keep customers happy with the product.

Daines says when he joined RightNow, half the clients ran the customer-service software on their own “servers” or computers, while the other half let RightNow run it on its servers -- the beginnings of “the cloud,” where companies had a portion of their Internet traffic and data operated from an off-premises site.

“We started seeing that customers on our infrastructure were happier, and it was more cost-effective to serve them,” Daines says. “Eventually we decided to move to a model of offering only a hosting solution.

RightNow had computer servers initially in Billings, to “host” the data and software for its clients. Soon, it would build them around the country and overseas.

Daines remained at customer care for a few years but then moved into the more lucrative job of sales manager, becoming general manager of sales for Australia, Japan and the Pacific Rim in 2007.

Fellow employees say all sales managers had to “carry a quota” they had to meet -- and that they can’t recall Daines ever missing one.

When asked if that’s true, Daines laughs and says he’s not sure.

“I think my (sales) team worked very hard to achieve some great results and grow the company,” he says. “If I missed one, it might have been once. But we were consistently top performers in the company.”

Daines says he was paid a salary plus a commission on his sales.

On RightNow documents filed annually with the Securities and Exchange Commission since 2004, Daines is never listed among the top five executives, who earned salary-bonus packages of $380,000 to $736,000 each in 2010, the year before the company was sold to Oracle.

Yet Daines reported on financial disclosure forms that he earned $283,000 at RightNow in 2010, his last full-time year at the company. He also had stock options that he sold before and after the company changed hands, netting income between $2 million and $10 million in 2011 and 2012, according to financial-disclosure forms.

Daines, who unsuccessfully ran for lieutenant governor in 2008 while a sales executive at RightNow, began scaling back his work at the company in late 2010, when he considered a U.S. Senate run and then later decided to run for the U.S. House in 2012.

He formally left RightNow the day the company merged with Oracle, in March 2012. Daines says now his work at RightNow is one of his proudest accomplishments, helping boost a “Montana-made” company that allowed many Montanans to find a good job in their home state.

“It’s a great Montana story,” he says. “It’s been one of the highlights of my life, to do that, in my hometown.”

When RightNow sold to Oracle for $1.8 billion, who got the money?

Steve Daines, his father, Clair, and RightNow co-founder Greg Gianforte formed a partnership in 1999 that financed and built the complex for the RightNow Technologies building on the southwest edge of Bozeman.

Daines then signed on with RightNow in 2000 as vice president for customer care, overseeing efforts to keep customers happy with the product.

Daines remained at customer care for a few years but then moved into the more lucrative job of sales manager, becoming general manager of sales for Australia, Japan and the Pacific Rim in 2007.

He formally left RightNow the day the company was purchased by software giant Oracle Corp. for $1.8 billion in March 2012.

Daines reported on financial disclosure forms that he earned $283,000 at RightNow in 2010, his last full-time year at the company. He also had stock options that he sold before and after the company changed hands.

Montana’s quality of life, home prices that are lower than the national average and the opportunity to bring families together make the state …

Gianforte makes it official: Republican businessman files paperwork to run for governor in 2016

BUTTE -- RightNow Technologies cofounder Greg Gianforte of Bozeman filed papers Monday to run for governor as a Republican in 2016.