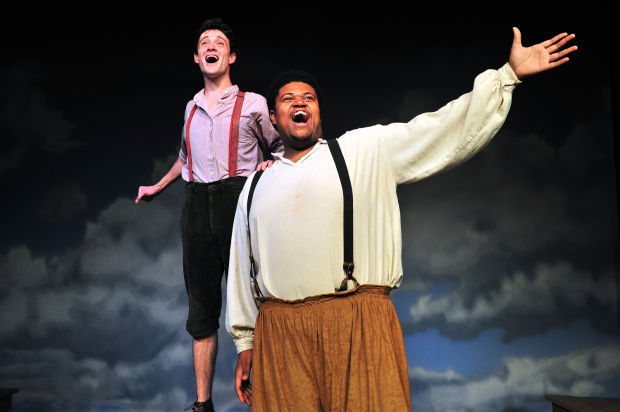 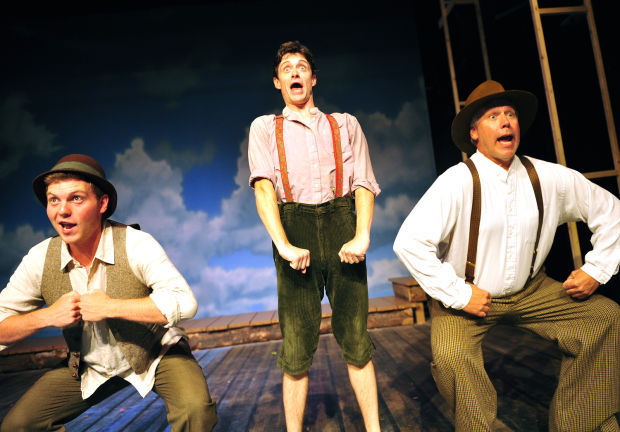 From left Jacob Fjare (The Duke), Josie Montana McCoy (Huck), and Phil Bartruff (The King) sing and dance in the upcoming musical at Grand Street Theater's production of Big River. 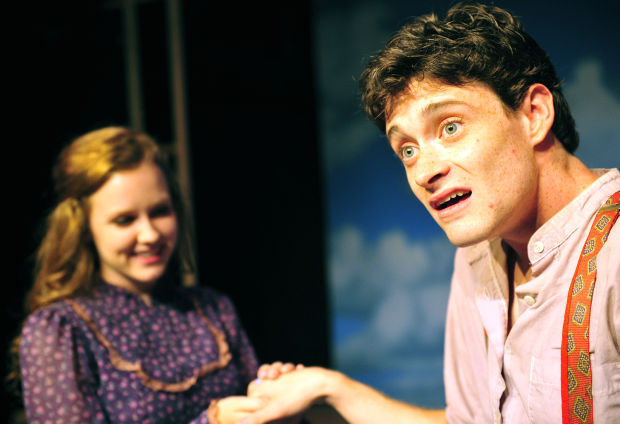 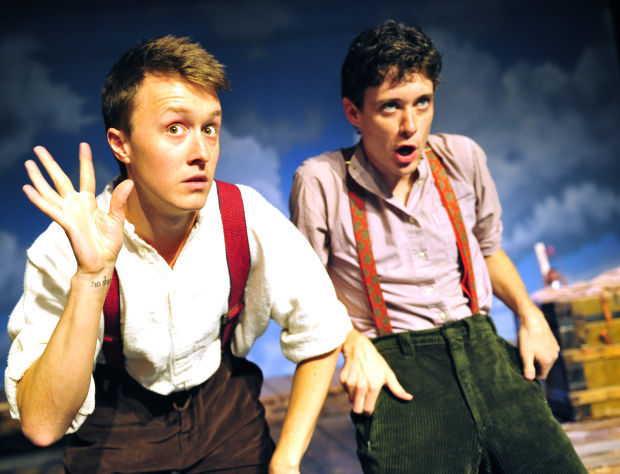 It’s hard to imagine community theater could get any better than this!

“Big River,” with a powerful cast led by two return guest actors, Lorenzo Rush Jr. and Josey Montana McCoy, takes to the Grandstreet Theatre stage this weekend with shows at 7:30 p.m. on Friday and Saturday and a Sunday matinee at 2:30 p.m. The play runs through July 20.

Director Marianne Adams said she knew she wanted to do “Big River” last year as soon as she heard McCoy singing some of the lyrics backstage and urging Rush to join him in duets.

“We’re lucky to get these two guys back,” said Adams, who directs the summer theater program at Grandstreet, which brings professional and college actors from around the country to Helena each summer. “They sound so good together.”

Although much of the music is infectiously joyous, particularly some duets by Rush and McCoy, the tale depicts a grim part of American history.

Set in pre-Civil War Missouri, Huck Finn, the son of a drunk, has been adopted by the Widow Douglas and her sister Miss Watson. A vagabond, Huck chafes at the confines of learning to read and write and also read the Bible. But when his volatile father appears, he’s forced to run for his life.

Huck soon finds himself joining forces with Jim, a slave of Miss Watson’s, who is escaping to freedom after overhearing he’s about to be sold.  Together they flee on a raft on the Mississippi River with a posse on their heels.

The raft is a story in itself, said Adams. Operated by hydraulics, it moves and changes direction with bends in the river.

Although it’s a simple, almost bare set, it has a “gorgeous” backdrop of clouds, painted by Jeff Downing, Grandstreet’s artistic director who did the set design and costumes and also choreographed three numbers.

And for at least one song, it will rain onstage, another behind-the-scenes technical challenge, Adams said.

“There’s some cool things in the show,” Adams added. “It’s the only musical Roger Miller ever wrote.” Some of Miller’s hits were “You Can’t Rollerskate in a Buffalo Herd” and “Dang Me.”

“It’s got some interesting takes on the government,” she said of some lines in the play that are relevant to the current tea party political climate. It also deals with the issue of race relations.

But, said Adams, quasi-quoting Twain, “Anyone who thinks too hard about this show will be shot.”

It’s a great, entertaining story with some unforgettable musical numbers – sung by some voices that you will remember years from now.

“ ‘River in the Rain’ is one of my favorites,” said Adams. “I could listen to it over and over. ‘Worlds Apart,’ a ballad that Jim and Huck sing, is heart wrenching and wonderful at the same time. And ‘Free at Last’ is a great song Jim sings — dreaming about being free.”

Rush, who’s done a concert version of the “Big River” music has never been in the play, but admits “the music just blows me away.”

That could sum up what some audience members felt when they first heard him sing on Grandstreet’s stage last summer in “Ragtime.” Rush gave a memorable performance as Booker T. Washington, wowing the crowd with his stage presence and arresting voice.

Rush describes his character of Jim as “a man of courage and love and wisdom.”

A graduate of the Western Illinois musical theater program, Rush said he had to dig deep to get in touch with the emotions of Jim and what it would feel like to be a runaway slave. To prepare, he’s researched historic personal accounts of slaves and also the stories of modern-day refugees who have had to flee their homelands.

“This play, this story is one that everybody can take with them,” said Rush. “It’s such a beautifully performed show because of the actors, musicians and brilliant direction. It’s going to take you on a journey.”

It’s also a once-in-a-lifetime opportunity, a moment in time that won’t be repeated, he said, which is one of the joys of live theater.

Together, Rush and McCoy create some compelling onstage chemistry and unforgettable musical moments.

McCoy, who played Huck in “Big River” at Wohlfahrt Haus Dinner Theatre in Wytheville, Va., is thrilled to be back in the part. “I was given an opportunity to step into my dream role. I’ve never been so moved by a script.”

McCoy played Younger Brother in last year’s “Ragtime” production, and was the hip-swiveling Chad in “All Shook Up,” the summer before.

“Ragtime” and “Big River,” although set 50 years apart, are telling a similar story about race relations in this country, he said.

“I feel this is some of Roger Miller’s most powerful work,” he said. “’Muddy Water’ and ‘River in the Rain’ – they stand the test of time.”

“To me, it’s such a great story,” concluded Adams. “The music is absolutely beautiful and fun. If people like Roger Miller, definitely come. If you don’t like Roger Miller, you’ll be pleasantly surprised. It’s just such a good story.”

What: “Big River,” a musical based on “Adventures of Huckleberry Finn” Music and lyrics by Roger Miller, book by William Hauptman

More info: Talk back Thursday with cast and director following the July 18

Gigi Hadid says she doesn’t want to model any more

Gigi Hadid says she doesn’t want to model any more

From left Jacob Fjare (The Duke), Josie Montana McCoy (Huck), and Phil Bartruff (The King) sing and dance in the upcoming musical at Grand Street Theater's production of Big River.