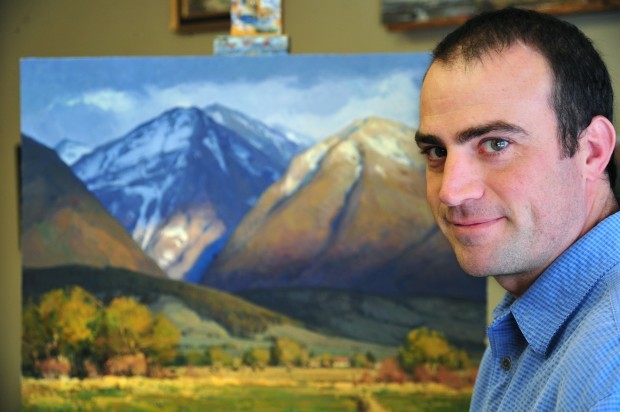 Josh Elliott poses with his ‘Paradise Valley Spring’ in his Helena studio recently. 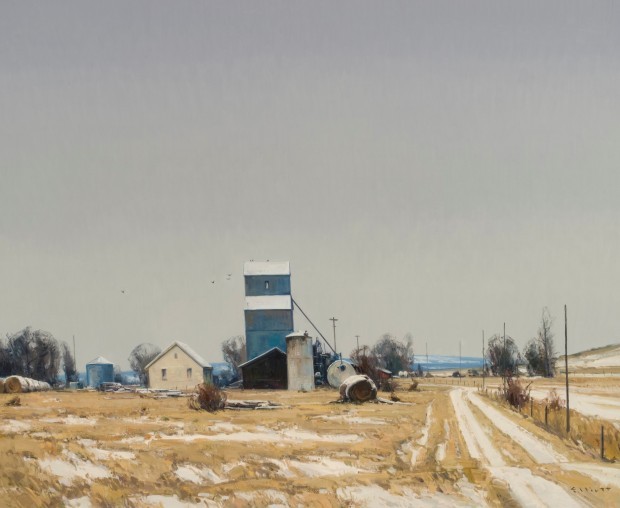 My first encounter with a painting by Josh Elliott was “Midwinter,” a portrait of a spartan Montana ranch in muted shades of grays and browns. Riveted, I was drawn further in.

That memorable encounter was more than a year ago at the Holter Museum of Art’s “Montana Landscape: The Eye of the Beholder” exhibit.

This Friday, Dec. 16, art lovers get to savor Elliott’s latest works. He joins fellow acclaimed landscape painter Dale Livezey, 6 to 9 p.m., at an opening reception for their new show, “About Place,” at the A.L. Swanson Gallery.

It will be the first hometown gallery show for Elliott. At age 38, he’s already recognized and admired in the national and international art world, winning awards at such prestigious shows as the Quest for the West, Maynard Dixon Country and the Western Rendezvous of Art. His art has also been in the Prix de West and the American Masters at the Salmagundi Club in New York City.

Some might say he was born to paint. His father, Steve Elliott, a former emergency room doctor, is an award-winning wildlife artist. His grandfather, Gordon Elliott, also painted, studying with Grant Wood of “American Gothic” fame. But it wasn’t until college that Josh decided to pursue painting. When he did, he dropped out to study with his father.

“There’s a path of discovery in painting,” Josh said, during a recent interview at his Helena studio. For him, it begins outdoors in the landscape. It’s where you’ll find him, paintbrush in hand, in all kinds of weather, from minus 20 degrees in Wisdom to 105 degrees in the Arizona desert.

His friend and fellow painter, Taylor Lynde, often shares these adventures, which take them into the snow-packed Big Hole, blizzards on the High Line and sun-soaked Southwest deserts.

Last February they were off to the Big Hole.

“We love painting nocturnes,” Lynde said. “We’d been chasing the full moon.” One night, unsuccessfully so. Cloud cover made them abandon painting and return to Wisdom. They awoke to moonlight. Knowing they had just 20 minutes before the moon would set, they dashed out, threw their gear in the truck, turned on the music and chased the moonlight down the road while Lynde made instant coffee in the passenger seat.

“It was 8 to 10 below zero,” recalled Lynde. They came upon a ranch house with a few lights on, the rancher already outside feeding his cattle. “The moon was just going behind blue-black mountains. That whole event was haphazard, but that translates into the poetry that we tend to re-create and sell.”

That night, they set up their easels in moonlight in Jackson. “There was just a handful of buildings, a couple of street lights, and a few shops. One had a mannequin left over from the 1940s in its window,” said Lynde. “Everything was covered in snow.”

Some of Josh’s oil paintings capturing that night in blues and white lean against a far wall in his studio. They’re in his reject piles. A few may get resurrected. Many will not.

“Outdoor paintings are like a musician playing scales,” Josh said. “It’s so I can come back and interpret the photos I’ve taken. When I first learned to paint, it was almost exclusively outdoors.”

But outdoor painting has its drawbacks.

“You can’t plan things out – the compositions are more by the seat of your pants. While in the studio, it’s much more contemplative,” Josh said. “You can put ideas behind it or develop a story behind it.

Just as a musician can be on one night and the music flows effortlessly, so too with painting.

“But they don’t all come easy,” he admitted. “If you try too hard, it shows.”

It’s not photographic accuracy, he seeks, but something more elusive.

“My work is intentionally stylized, but I like emotional truth. When there is no truth in a nature painting, it’s much harder to relate to,” he said.

“For something to be art, it needs something of the artist in it,” he wrote in his artist statement for the Holter show. “I have a saying — ‘A successful painting is nature’s truth filtered through the artist.’ ... a literal interpretation of nature is nothing special without the soul of a person to convey it. Otherwise, no painting could do nature justice!”

Those touched by Josh’s work are many, among them Livezey.

“I’ve been aware of his work for a few years,” he said. “The looseness in the paint quality gives it a real vibrancy and life and energy that’s really delightful. There’s a real sense of reality to his paintings. Artistically speaking, he is wise beyond his years. It is

an honor to show with him.”

“Josh, nationally and internationally, is receiving some of the top of the top awards,” said Lynde. “He’s just at the top of his game. He’s in shows featuring the preeminent landscape painters in the country. He’s not only in those, but he’s winning awards.”

“It’s poetic. That’s the only way to talk about his painting,” said Holter Curator Yvonne Seng. “For example, his winter landscape. How could he take such a gray, desolate scene? Who would do that? Everyone gravitated to that painting. It captured something. It was almost as though he was writing in his painting, rather than depicting the scene. It’s not only the technique and the mastery he has, but the feel of lightness — the poetic lightness. His use of light is wonderful. His light dances. I love his work.”

What: “About Place.” Opening reception for exhibit of new paintings by Josh Elliott and Dale Livezey

Popular Helena landscape painter Dale Livezey has been called “a poet of dusk and of daybreak” by writer Rick Newby. “There is a contemplative…

Josh Elliott poses with his ‘Paradise Valley Spring’ in his Helena studio recently.