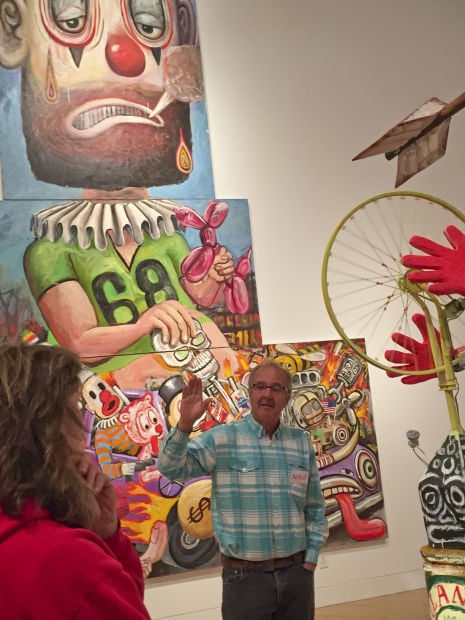 Artist Jay Schmidt talks about his art in his exhibit 'Beer and Football' showing Friday at the Holter Museum of Art. 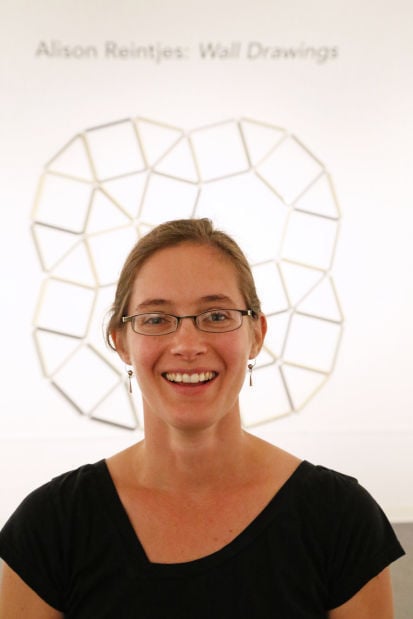 Ali Reintjes poses for a portrait in front her new exhibit opening at the Holter Museum of Art last Friday.

Polar opposites just might be the best words to sum up two very different exhibits now showing at the Holter Museum of Art.

While Alison Reintjes’ exhibit “Wall Drawings,” in the Sherman Gallery is an island of tranquility, Jay Schmidt’s “Beer and Football” in the Baucus Family Gallery is explosive in its drama, size, colors and sheer kinetic motion.

Both artists spoke Oct. 18 at the Holter Museum about their exhibits and their art.

”Unity or bringing people together” is a basic tenant of all faiths, said Reintjes in opening her talk about the inspiration behind her work.

Although her work isn’t spiritual, she said, certain values she cares about find their way into her work.

“The things I value in my personal life are beauty, peace, unity and joy,” Reintjes said.

She didn’t realize they were working their way into her art, until a friend who attended Reintjes’ exit show at the Bray in 2003 said to her, “I can’t believe you took all these diverse parts and they came together in this really harmonious way.

“I was really pleased that this concept of unity and peace was in the work,” she said, “but it was nothing I set out to do.”

While a number of Helenans may be familiar with her decorative cups and bowls, Reintjes is moving away from functional objects in this latest body of work.

Instead, she delves wholeheartedly into abstract and complex geometric-inspired wall drawings created from small ceramic pieces.

“I’m not a terribly intellectual or academic person,” said Reintjes, “which means that making and reflecting on art is not a verbal experience for me.”

It’s created more intuitively, she said, rather than as part of a verbal process.

“I have a favorite Phoebe Toland work,” Reintjes said. “It’s a drawing and I often stop to look at it.” She’s not using words when she gazes at it, “I’m just experiencing shapes, colors and movement and they transport me.”

It’s that experience she hopes to capture in these works.

The naming of the pieces, which helps express some of their meaning, comes as the final step and often with the help of her husband Brandon Reintjes, who is an artist and curator.

One example, she said, is “Sverdrup,” a work of undulating, wavelike patterns, which is named in honor of a Norwegian oceanographer Karl Sverdrup and his work on waves.

A number of Reintjes’ “drawings” are constructed from “canes,” short, hollow, trapezoidal slip cast pieces of ceramic that are primarily white, grey and black.

“I have a single element to build a composition,” she said. “I like that restriction of form opening up possibilities.”

And in this series of work, she’s also playing with negative space as much as with line. ’”The negative spaces are as relevant as the form,” she writes.

“I don’t really do free form,” she added, preferring to create a template before installing the artwork on the wall.

Jay Schmidt’s “Beer and Football” and its in-your-face circuslike atmosphere is inspired by Schmidt’s view of the world as “a runaway train, traveling full speed ahead, consuming the planet at a breath-taking rate.”

The title hearkens back to Cicero’s quote about the corruption of Rome, Schmidt said. “While the empire has all these problems -- all the people care about are the bread and circuses. A lot of people are happy watching football and drinking beer -- that’s where the title comes from.”

A key influence on his animated sculptures has been summer work Schmidt did while in college, working with carnivals and the construction of such things as miniature golf courses.

“The idea of fun, humor, being visually lively with motion and elements of animation are always elements I’ve worked with,” he said.

Another major influence was the California Funk Movement and its emphasis on pop culture, humor and politics. Much of that movement was centered at UC-Davis, when Schmidt attended graduate school there.

Schmidt created his latest body of work since his retirement from Montana State University, where he taught sculpture. “At 62 I’m making my best work,” he said. “I have the same energy as when I was in my 20s.”

His latest adventure in wild and wacky sculptures started when he traveled to New Jersey to get a pickup truck he bought on eBay and stopped in to visit an artist friend who had also taught college art.

“We felt like we still had something to say,” said Schmidt and they started making art together.

The friend came to visit him in Bozeman, where they collaborated on more work. Soon this led him to begin working with the collaborative art-making group Paintallica -- a group of vibrant, high-energy artist friends who “have a mutual interest in building things and getting rowdy.”

Schmidt cites them as “a major source of energy and inspiration.”

“I could have never dreamed Paintallica existed,” he said. “It was a dream come true to make art and have fun together.

In fact, now that he’s out of academia, Schmidt questions just what it’s doing to young artists.

A major theme in his exhibit are the words “Free Art School.”

He laments that many young artists feel they have to attend prestigious art schools and will rack up debts of more than $100,000, while trying to earn credentials to gain acceptance and recognition in the Art World.

Although he considers much of his work funny, “it’s serious work,” he said.

“These days I make art that addresses the contemporary issues of endless wars, economic injustice, environmental destruction and political dysfunction,” he wrote in his artist’s statement. “My ultimate goal is to make good paintings and sculptures through a process that involves not just subject matter, but formal concerns, technical skill and intellectual rigor, as well as a fair amount of intuition, outrage and humor.”

Will Smith’s memoir is coming soon

Will Smith’s memoir is coming soon

Artist Jay Schmidt talks about his art in his exhibit 'Beer and Football' showing Friday at the Holter Museum of Art.

Ali Reintjes poses for a portrait in front her new exhibit opening at the Holter Museum of Art last Friday.