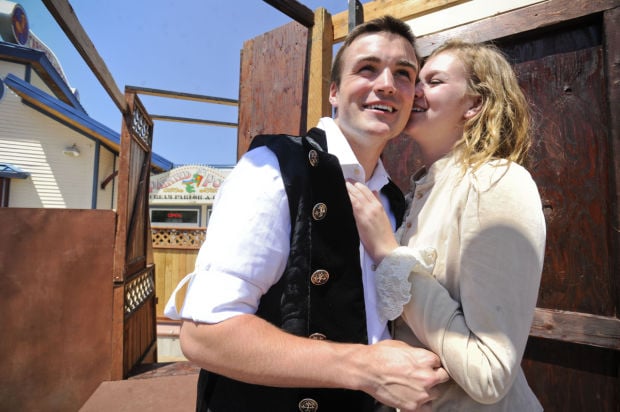 Thom Bridge/ Independent Record- Hero, played by Bella Delong whispers into her lover Claudio's ear who is played by Troy Guthrie. Montana Shakespeare Company opens Much Ado About Nothing July 17th at the Great Northern Ampitheatre. 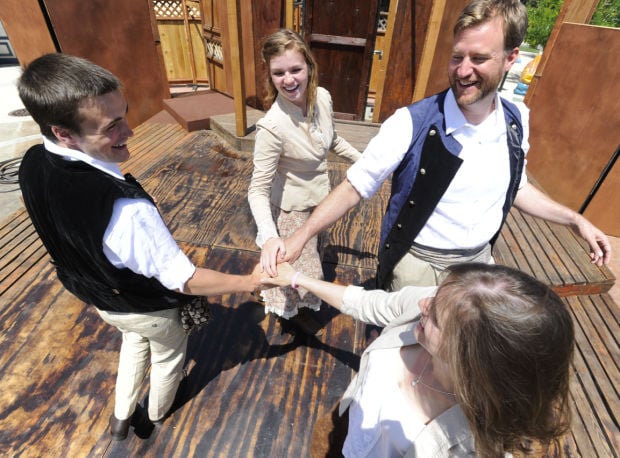 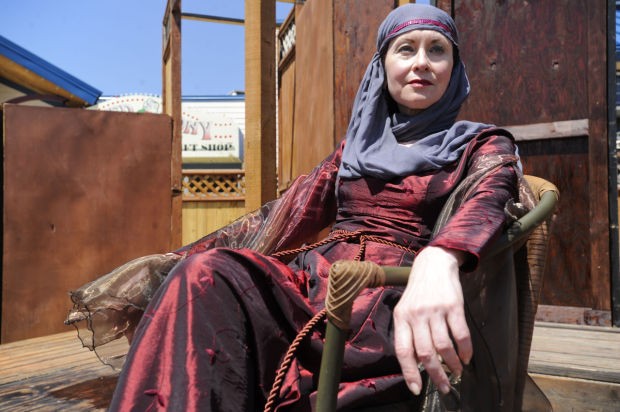 Susan Fay plays Eleanor of Aquitaine in Montana Shakespeare Company's presentation of ‘The Lion in Winter,’ which opens July 10. 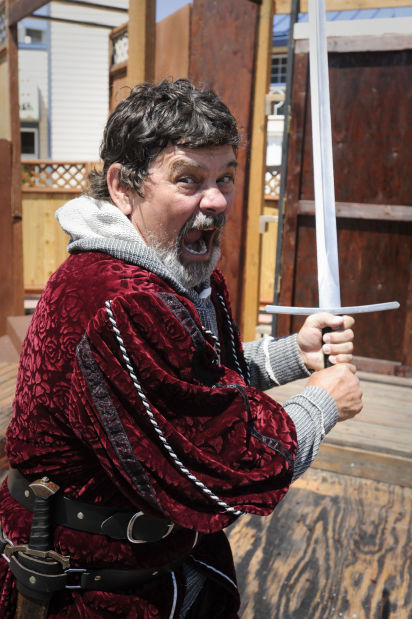 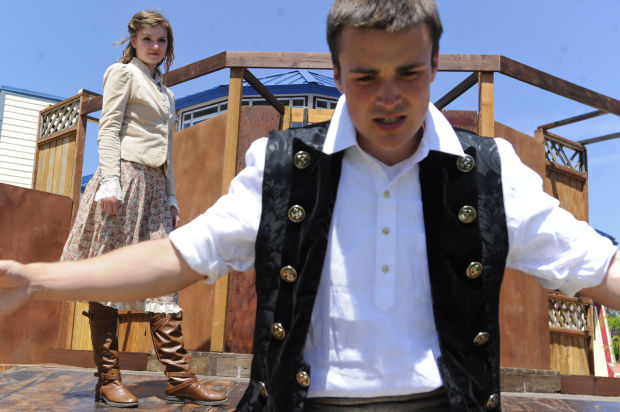 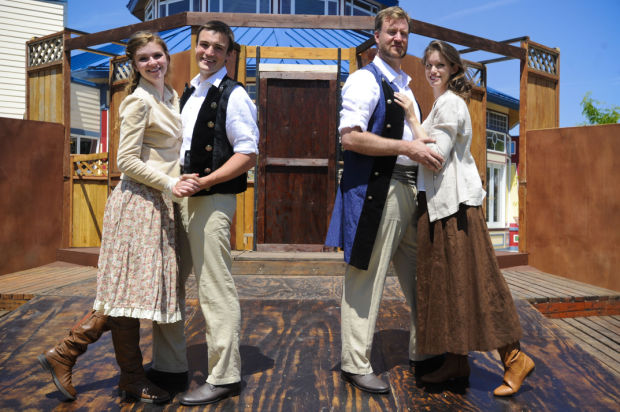 Claudio and Hero, left, played by Troy Guthrie and Bella DeLong, and Beatrice and Benedick, played by Laura Brayko and Robert Tobin, are the stars of Montana Shakespeare Company’s ‘Much Ado About Nothing.’

Two of theater’s most fascinating female characters and dynamic partner duos come to the stage this summer in Montana Shakespeare Company’s repertory shows, “The Lion in Winter” and “Much Ado About Nothing.”

“Lion in Winter,” by James Goldman, opens 7 p.m. Thursday, July 10 at the Great Northern Amphitheatre, followed by William Shakespeare’s “Much Ado About Nothing” the following Thursday, July 17.

The plays will alternate repertory style through Aug. 17.

‘The Lion in Winter’

“Eleanor is an iconic role,” said Susan Fay, of her character, Eleanor of Aquitaine. Eleanor was one of the most powerful women in history — queen for 65 years of her life, first as the queen of France and then as the queen of England.

“She was one of the most influential women of the 12th Century,” said Fay.

The play, written by James Goldman, is set during Christmas 1183 at Henry II of England’s castle.

At the time of the play, Eleanor had been imprisoned by Henry for 10 years for leading a civil war against him and had persuaded their sons to join her.

The play deals with the gamesmanship of deciding who will succeed Henry on the throne.

“She was an educated, cultured, sensuous, sophisticated woman, who was trusted to rule the country when her sons were off on Crusade,” said Fay. “She’s a complicated character because she loves her husband and all her sons.

“Eleanor refers to herself as an animal in chaos; that’s the anchor I hold onto,” said Fay. “She still loves her husband even after she was locked up by him for 10 years. She loves all her sons, but only one can be king.

Fay, who is a professional actress in Chicago, is a former professional dancer, and uses this background to give a very physical and active portrayal of Eleanor.

“Eleanor was a very vigorous woman, who survived into her 80s,” said Fay.

Playing King Henry II is Kim DeLong, artistic director and co-founder of Montana Shakespeare Company, who is also the director.

“I love the play,” he said, and chose it as a dynamic companion piece to Shakespeare’s “Much Ado.”

“It’s just one of the most brilliant plays — one of the great plays of the 20th Century,” he said.

“It’s a daunting role,” said DeLong of Henry II. “He ruled for 20 years and was the most powerful leader in the world. His son was Richard the Lionheart.”

A formidable opponent in battle, Henry was an able soldier who could be found in the thick of the action, said DeLong. His relationship with Eleanor ranged from “absolute rage to profound intimacy.”

“It’s a challenge,” DeLong said. “It’s one of the most difficult plays out there because of the range of emotions which turn on a dime. That’s the beauty of it.”

‘Much Ado About Nothing’

“‘Much Ado About Nothing’ is one of my favorite plays,” said DeLong, of why he chose it this season. “We had a terrific actress to play Beatrice and a terrific actor to play Benedick. I wanted to capitalize on that.”

He also wanted a sharp contrast with “Lion in Winter.”

Considered one of Shakespeare’s wittiest comedies, “Much Ado” tells the story of two pairs of lovers — the beautiful Hero and dashing Count Claudio, and the unlikely sparring duo of sharp-witted Beatrice and confirmed bachelor soldier Benedick.

Into the midst of the lighthearted comedy enters jealous malcontent Don John, who weaves a series of lies and deceptions, making much ado about nothing.

Playing Beatrice is Laura Brayko, who has appeared in 15 of MSC’s productions since 1999, most recently as Benvolio in “Romeo and Juliet” last season.

Former Helenan Robert Tobin, who is now a professional actor in Chicago, portrays Benedick. The artistic director of the Aston Rep Theatre Company, Tobin has performed in a number of Shakespeare plays, including the roles of Macbeth with the Utah Shakespeare Festival and King Lear with The MET Theatre-Los Angeles.

Beatrice is just one of the guys, said Brayko of her character, who starts out the play with a body joke. “She’s instinctively confrontational and is the first one to pick a fight (typically with Benedick).

“She’s a feisty woman” with a lot of power, but she does show moments of vulnerability, said Brayko. “She has a huge heart. Beatrice is so fun, I just love to play the part.”

Although a great soldier, Benedick’s at ease in a number of settings, Tobin said. “He hangs out with the count. But his real strength is his verbal wit. He likes Beatrice a lot and is quite a verbal wordsmith.

“What I’ve noticed is how great the language is,” said Tobin. “(Shakespeare’s) writing is amazing in this play. If you’re doing Shakespeare, it’s one of the big roles to do. The language is so good.”

Originally set in the 16th Century in Spain, the setting for this production has been updated to Spanish California of the early 1800s.

“Much Ado” also introduces one of Shakespeare’s most beloved comic characters, Dogberry, the constable, played by veteran professional actress Mary Linn Crouse, who is using the inspiration of Calamity Jane in her character development.

This season, an additional week of performances have been added. And DeLong has also switched the orientation of the stage, so the audience will sit on the amphitheatre steps facing north toward the stage.

Tickets are $15 for students and $18 for general admission. To purchase, call 431-1154 or visit montanashakespeare.org. Group rates are also available.

What: ‘Lion in Winter’ by James Goldman

Cost: Tickets cost $15 for students and $18 for general admission

What: ‘Much Ado About Nothing’ by William Shakespeare

Cost: Tickets cost $15 for students and $18 for general admission

Join the first ever Shakespearean scavenger hunt through downtown Helena.

Decode clues in a Bardacious race to see where Shakespeare influences our daily lives.

Chiara Ferragni to star in a new reality show

Phil Collins confirms next Genesis tour will be his last

Phil Collins confirms next Genesis tour will be his last

In the words of Garth Brooks, “It’s the ropes and the reins and the joy and the pain and they call the thing rodeo.” And it’s coming to East H…

With back-to-back presentations by the Grandstreet Theatre and Montana Shakespeare Company, this afternoon in Helena will be a theater lover's dream.

Thom Bridge/ Independent Record- Hero, played by Bella Delong whispers into her lover Claudio's ear who is played by Troy Guthrie. Montana Shakespeare Company opens Much Ado About Nothing July 17th at the Great Northern Ampitheatre.

Susan Fay plays Eleanor of Aquitaine in Montana Shakespeare Company's presentation of ‘The Lion in Winter,’ which opens July 10.

Claudio and Hero, left, played by Troy Guthrie and Bella DeLong, and Beatrice and Benedick, played by Laura Brayko and Robert Tobin, are the stars of Montana Shakespeare Company’s ‘Much Ado About Nothing.’