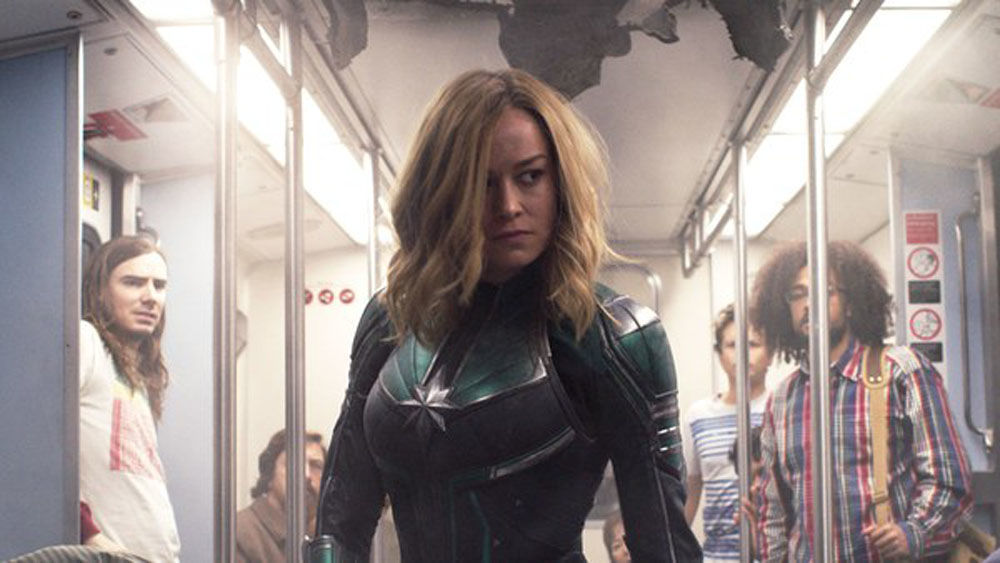 Brie Larson in a scene from "Captain Marvel."

So, I loved the tributes to Stan Lee, Marvel’s dear old dad, who passed in November.

And I also loved Brie Larson, an actress of substance and subtlety invited to shoulder a super-hero movie.

But that’s about all I loved about the latest Marvel adventure, “Captain Marvel.”

An actress with the depth of Larson shouldn’t be washed away in a blitz of CGI. And she shouldn’t be upstaged by a crazy cat with super-kitty powers.

And, most of all, she shouldn’t be set inside a male story that values action more than insight.

A fair number of reviews of “Captain Marvel” have said that the movie is better than Brie – that she never develops a personality.

I beg to differ. Brie is the best thing in a movie that builds a very un-Brie story around her and in essence asks her to fit herself into the Marvel male mode of superhero. Brie would be perfect as an understated superheroine, with more brains than brawn, with more compassion than engine.

But Marvel’s not going to give us an understated superheroine. They just want Brie to wriggle into that tight body suit and be the action hero teens want. She is Marvel’s answer to DC’s Wonder Woman, and there’s a touch too much imitation in this ideation of the Strong Female Force circa 2019.

The movie features an origin story that’s buried. First, we get a burst of action, then the tale of the lady hero’s past begins to appear in flashbacks. One could argue that’s not unusual – flashback structure is a very common narrative device.

But I suspect the reason wasn’t literary technique, but because Marvel wants to pop the pows right from the opening moment. Then, only briefly, to dip back to see the heroine before she obtained her powers.

We don’t really get a leisurely close-up of Captain Marvel in her pre-powers life. That’s a shame, because to appreciate her fully we need to watch her grow up. In super-power lingo, we need to see her get bit by the spider and get confused with her new powers.

We do get that eventually, in flashback, but not directly. And I think that’s intentional to keep the pedal to the metal as long as possible.

Later in the film, relationships begin to matter more. And, to be fair, I warmed to “Captain Marvel” in the second half, especially when Maria Rambeau and her daughter Monica arrive in the script.

Fury and Captain Marvel become playful friends and partners. Brie begins to piece together her past, which produces some poignant revelations. All that was intriguing.

One character is vividly brought to life: Maria Rambeau, played powerfully by Lashana Lynch. She’s linked to Brie’s past history, and becomes Brie’s partner. Rambeau is warm and loving, making me wish more scenes like that were available to Brie in this script, especially in the origin tale.

But those relationships are a diversion. The film feeds Marvel fans the Marvel formula. My friend Jon, a superhero movie aficionado, sums up “Captain Marvel” as “a good film that rehashes what has worked in so many other Marvel films, but brings nothing new to the table.”

The story is basically a female variation on the “Bourne Identity,” with our heroine trying to figure out who she is. Turns out she’s a twofer-one special: She is an alien who once was a fighter pilot on earth. Her memory was erased, but she’s piecing it back together like reassembling a broken hard-drive.

This story of identity is compelling, but it’s relegated to moments inside incessant action.

To repeat my mantra: American action movies are war movies, in a stereotypically masculine vision – full of sound and fury.

It’s time for a moral shape-shifting. Our violent society full of school shootings needs to look to its art forms to guide us to an alternative vision of society.

Let’s start with an alternative form of entertainment that offers young viewers the possibility of compelling stories with interior drama, rather than space wars -- tales which present peace as a possibility, under the guidance of non-violent leaders like Nelson Mandela, Bishop Tutu, Mama T -- or Monica!

Monica, Maria’s precocious daughter, is an 11-year-old with an as-yet uncorrupted spirit.

I’d turn the leadership of the world over to Monica, at age 11.

Captain Monica, take us somewhere we’ve never been before: a peaceable kingdom.

Marvelous farewell: Goodbye Stan Lee, we’re sorry you didn’t get to see your latest movie. But we know how your stories work: No hero ever stays dead for long. We’ll be waiting.

What's coming and going from Netflix in June 2020

What's coming and going from Hulu in June 2020

"Love, Victor," "'We Are Freestyle Love Supreme," "Taste the Nation" and more arrive this month.

Short & sweet: 3 quick reads are like a big hug from old friend

While some delve into books for escape in coronavirus confinements, here are three quick reads that offer more than just words on the page.

Brat Bonanza game: How many can you eat?

Cookout season is here, and now back by popular demand: The game where you find out how many brats you can eat in 20 seconds!

Brie Larson in a scene from "Captain Marvel."