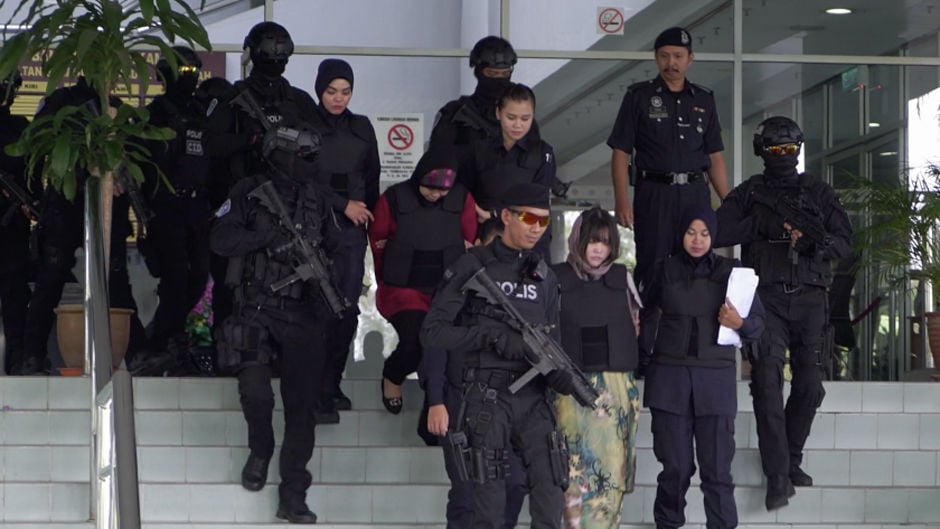 Doan Thi Huong and Siti Aisyah are escorted out of the courthouse by armed guards in the documentary “Assassins.”

Two young Asian teens – dreaming of becoming TV stars -- are excited to be selected to “star” in a series of “Prank Videos.” Doan Thi Huong from Vietnam and Siti Aisyah, from Indonesia, are cute, cheerful and naïve. They will be paid well for “easy work.”

The silly skits – in which strangers are playfully accosted - include kissing strangers in the mall or running up behind them, covering their eyes and teasing: “Who am I?”

Victims are embarrassed and startled, but ultimately unharmed.

But for their next gig, Doan and Siti find training more intense, with more attention to detail. The “hand lotion” must be very carefully handled and must be placed directly on the eyes of the subject.

They figure it’s a big role, so they stay excited.

On Feb. 13, 2017, one of the ladies is asked to run up behind a man in Kuala Lumper’s International Airport, reach around him and rub some lotion in his eyes from behind – and then run away.

The well-trained actress agrees and carries out her role proudly. He staggers back, wobbly and asks security for help. In minutes, he is dead.

The teen “actress” has unwittingly poisoned him with the nerve agent VX, one of the most toxic chemicals on earth.

The girls are arrested and put on trial, with the death penalty looming.

Meanwhile, the perpetrators who orchestrated this long drawn out assassination plot escape to North Korea.

This spellbinding true documentary of international espionage is told by an Asian journalist who covered the story and by lawyers who represented the women in court.

Their defense was the truth – that the girls were carrying out video pranks and had no idea that the final prank was actually an assassination plot.

But the prosecutors present them as assassins, who hold their hands in the air after the killing – “proving” they knew they had poison on their hands.

In fact, Siti and Doan only knew they had sticky lotion that needed to be washed off.

“Assassins” is a riveting documentary – full of surveillance footage -- about a nightmare for two naïve young actresses who become pawns in an intricate conspiracy.

This is a pure documentary, not a sloppy doc which turns a “documentary” into political satire.

I’m a purist on documentaries. For me the key is “invisibility” and “objectivity.” Just as a journalist should stay out of her story, I believe that documentary filmmakers should let the story tell itself.

Robert Flaherty was the master of the documentary, highlighted by “Nanook of the North,” his 1922 masterpiece about a family of the indigenous Inuit people living in the Canadian Arctic, in Northern Quebec.

Flaherty would have applauded documentary filmmaker Ryan White. He stays out of the way, letting the story speak.

Not only are we drawn into the story of innocent girls being exploited, but we get a detailed portrait of the Malaysian legal system. The lawyers are well-trained and compassionate. We see amusing portraits of their “offices,” including a living room floor strewn with a huge array of papers – all in neat piles. When he needs a document, the attorney tiptoes through the maze pulls out the exact one he wants.

“I know where everything is,” he smiles, or words to that effect.

We also are treated to a nuanced portrait of three cultures – North Korea, Malaysia and Vietnam. The film helps us differentiate their politics, their law and their lifestyles.

The governments of these countries engage in secret negotiations during the trial to gain the release of these ladies. Malaysia forcefully intervenes, but Vietnam – with closer relations to North Korea – is more tentative.

We also see glimpses of what is called “the underbelly of Kuala Lumpur,” which includes drugs, sex trafficking and crime. Siti and Doan could easily have fallen into prostitution. Unscrupulous men are looking for naive young women, and offering them jobs in videos as the bait hiding a deadly barbed hook.

We also get a hint of what it’s like to live in North Korea.

Half-brother Kim Jong-nam travels more freely outside North Korea than we might suspect. Although he appears to be mostly apolitical, and seems to want to live his life apart from the ruling family, he’s perceived as a threat to the Supreme Ruler. He’s suspected of being a CIA informant.

By the time the truth-stranger-than fiction tale ends we have been taken on a very stressful emotional roller coaster while immersing ourselves in Asian culture.

Lady Gaga's dog walker was shot and two of the singer's French bulldogs, Koji and Gustav, were stolen in Hollywood during an armed robbery, police said.

REVIEW: 'I Care a Lot' should scare plenty of senior citizens

“I Care a Lot” is incredibly good during its first 30 minutes or so. Then, it takes an abrupt left turn and becomes a film that doesn’t quite know what it wants to be.

'Frasier' is being rebooted, with Kelsey Grammer reprising the role 17 years after show ended

The hit 90s sitcom "Frasier" is set to return to screens, with Kelsey Grammer reprising his role as radio psychiatrist Frasier Crane in the reboot.

The glam was back at the Golden Globes, albeit at a distance

There was nary a pair of sweats in sight. Jason Sudeikis was the glam outlier in a tie-dye hoodie as he picked up an award remotely, saying: "Wow, do I talk now?"

Frye played the 8-year-old Punky in the original NBC series. Now the show is back, and she is too.

Zoom fails, an emotional tribute to Chadwick Boseman, plus a fiery Jane Fonda were some of the big moments from the 78th Golden Globe Awards.

Despite spending most childhood summers a stone’s throw from Yellowstone National Park and dedicating much of her career to photographing bison, Livingston-based photographer Audrey Hall never tires of seeing the iconic animal in the wild.

LONDON (AP) — Prince Harry, who decamped from England to Southern California last year, rapped the theme song to the 1990s sitcom “The Fresh Prince of Bel-Air” during a late-night talk show appearance in which he said he didn’t walk away from his royal duties.

'The Mighty Ducks' coaxes Emilio Estevez back into acting

LOS ANGELES (AP) — Emilio Estevez said “The Mighty Ducks” TV series wooed him out of the director’s chair and back into acting, but only because it was a worthy successor to the 1990s movie franchise.

7 inspiring stories about being Black in America

In celebration of Black History Month, here are seven inspiring and evocative stories about being Black in America.

Doan Thi Huong and Siti Aisyah are escorted out of the courthouse by armed guards in the documentary “Assassins.”