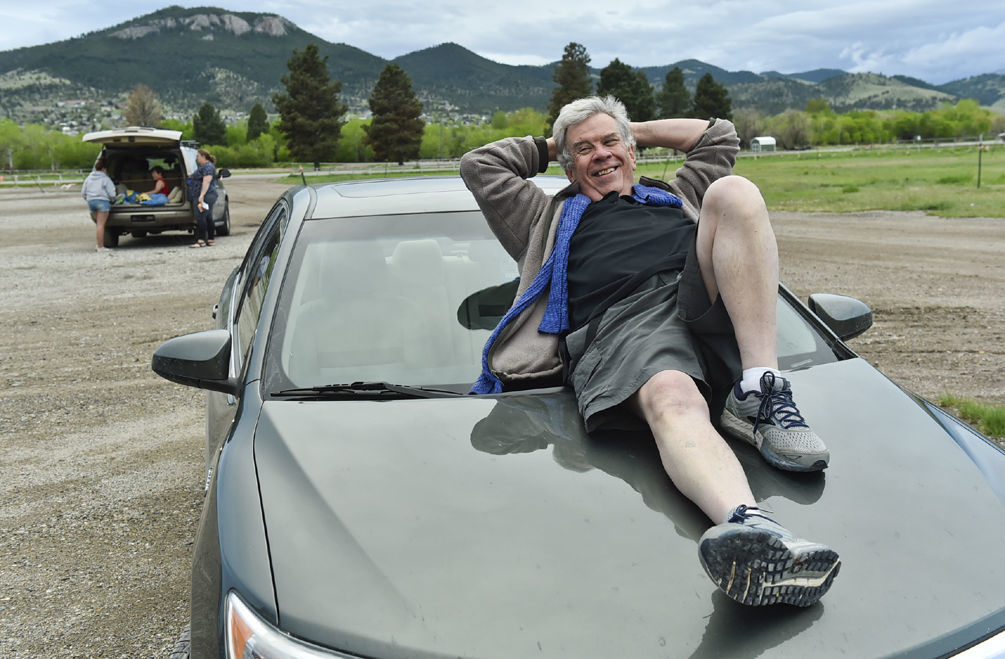 Brent Northup stakes out a spot in the parking lot as hundreds of cars parked at the Lewis and Clark Fairgrounds Wednesday night for the first week of drive-in movies. The two temporary movie screens showed "The Goonies" and "Jumanji: The Next Level."

Sleeping bags sprawled over the top of SUVs. Blankets spread out on truck beds. Kids poised on top of the hoods of their cars.

In the distance, some ominous dark clouds lurked. Nobody cared.

After three decades inside the cineplex, Helena was ready to welcome back drive-in movies.

How eager were Helena’s stay-at-home families to leave their living rooms?

We got a clue on Monday, May 18. The Lewis & Clark Fairgrounds started selling 300 tickets to two drive-in movies at 10 a.m.

Those 300 cars started lining up at 7:30 p.m. when the gates opened. One side was set up to show “Goonies” and the other had “Jumanji: The Next Level.”

For those who arrived early, the screen suggested tuning our radios to “91.5,” which would broadcast the sound.

The parking area had been cordoned off into rows, with cars parking on both sides of stretches of tape. Cars tended to face the screen, but some trucks and SUVs backed up to the tape – with moviegoers in the back end.

Vehicles were trying to be polite, not blocking cars behind them, but visibility was still a problem. The screen was too close to the ground – and was comparatively small. The old Sunset Drive in was 60 feet by 60 feet, and was 18 feet off the ground. By contrast, our screen was 12 feet by 36 feet, and was about 6 feet from the ground.

Since there’s no graduated amphitheater, many cars didn’t have a clear view.

Before the movie started, we were treated to country music. Rather, a country song: “Meet me in Montana,” by Marie Osmond and Dan Seals. That was a lovely song the first time I heard it that night. Less lovely the 5th time, and a lot like water dripping in my ears the 20th time. But, hey, we could turn it off.

At 9:02 the two-hour film started, with some lightning off in the distance.

Some cars starting shifting around during the early going, seeking better visibility. My view was about two thirds clean, with the rest blocked by a car. Others could see even less than I could.

By 9:40 it was dark, and at 9:58 rain drops started hitting my windshield. At that point, I could see people starting to get off their roofs, out of the truck beds. Some left.

I flipped on my wipers at 10:04, and the downpour hit shortly after that as the temperature dropped to mid 50s. I pulled my comfy blanket up around me and smiled.

A few trucks backed out of their spots and turned around to face the screen. A few moviegoers timed their potty runs badly, and were racing -- and laughing -- back to their cars in the driving rain.

The storm just increased the fun. Springtime in the Rockies includes all four seasons in a typical week.

I handed out cards inviting moviegoers to text me reactions.

1. The screen was too small and too low, making visibility uneven. Small radios had reception problems.

2. Parking was frustrating. Student attendants meant well, but had no clear plan. Big trucks were sometimes in front of small cars. “Parking almost killed the experience for us,” texted one.

3. Wednesday is a bad day for a late movie. How about the weekend? (Note: Maybe. Staffing apparently works better on Wednesday.)

5. But all the complaints ended the same way: “An AWESOME idea” and “I’d still choose going to the drive-in over sitting at home” and “It’s a great idea for the fairgrounds to host drive-in movies. It’s an amazing thing during the pandemic.”

Changes are being made: A berm will lift the screens by 3 feet, from 6 to 9 feet off the ground; trucks will be asked to park on the edges or at the back; and attendants will help try to guide the parking, “but there are a lot of trucks in Montana.”

The public’s verdict: Do it again! And often!

“Tell your readers, we’re doing the best we can,” said Severson.

Thanks, Marty. Thanks, Kevin.

Helena had a good time at the drive-in.

Helena's Parks, Recreation and Open Lands Department is implementing a new fee structure for use of its parks and facilities that includes res…

Watch Now: Who won the most Emmys?

Watch Now: Who won the most Emmys?

Brent Northup stakes out a spot in the parking lot as hundreds of cars parked at the Lewis and Clark Fairgrounds Wednesday night for the first week of drive-in movies. The two temporary movie screens showed "The Goonies" and "Jumanji: The Next Level."