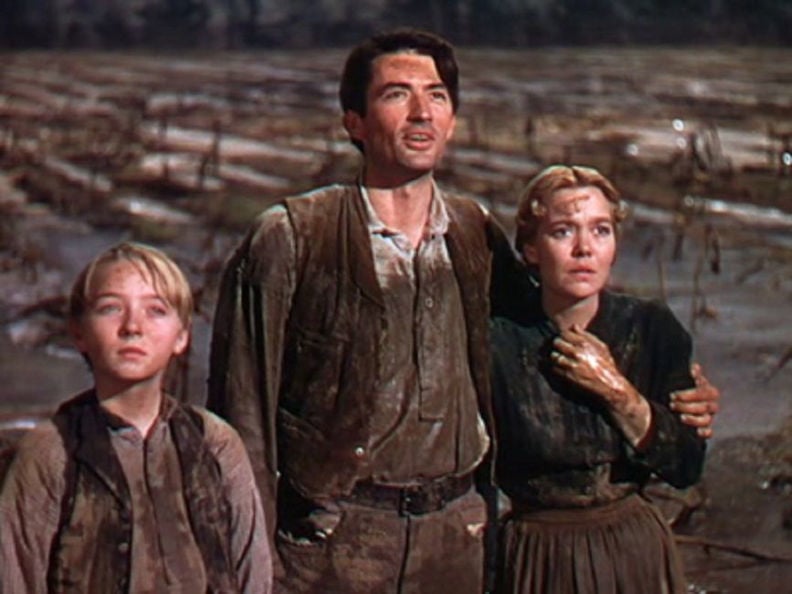 Claude Jarman Jr., Gregory Peck and Jane Wyman in a scene from “The Yearling.”

If life is gentle and fair, a child will learn about death slowly, in good time.

For young Jody, his rehearsal comes at age 12.

“The Yearling” is a 74-year-old film, speaking a timeless message: that for everything there is a season. It received eight Oscar nominations including Best Film, Best Actor, Best Actress, Best Juvenile Actor and Best Director.

Stories without death ring hollow, even to kids. Fairy tales, before being sanitized, were often Grimm tales full of scary creatures and painful moments. From these trips down the rabbit hole, the child gains the understanding and power to withstand childhood, which is unlikely to be pain-free.

Clarence Brown’s “The Yearling,” based on the 1938 book by Marjorie Kinnan Rawlings, is set in the woods of Florida in 1878. A homestead family has carved out a spot for a home and a garden. They are trying to grow crops to eat and sell, but weather is fickle.

Jody is the only child, others died as infants, or before. Mom carries that sadness with her, and visits the grave often. Thus, even before we begin, a sadness – called being “rare” in the film - surrounds both Ma and Jody.

Jody grows up surrounded by animals. He loves to spend time by a creek, where frogs croak and raccoons drink the water. In the woods, bears roam.

Jody (Claude Jarman Jr.) loves them all and would love to bring one home as a pet.

But mom, played lovingly by Jane Wyman, firmly says no. By the way, at the time of the filming, Wyman was married to Ronald Reagan. Now you know.

Jody’s Pa is a kind man, who loves his son. Gregory Peck, at his best, portrays a dad trying to balance justice and compassion in raising a child.

One day Pa kills a deer, not realizing a fawn lay nearby. Jody asks if this fawn can be his pet. Dad convinces mom, and Jody has a companion which he names Flag – a name suggested by a neighbor boy, suffering from what will prove a fatal disability.

Flag sleeps with Jody by night, and plays with him by day.

But Flag is a wild animal, who can destroy crops. And without crops the family cannot survive. A hurricane wipes out one harvest.

“Sometimes a guy gets struck down so low, not a power on earth can ever bring him up again,” says Pa.

One of Pa’s rules of the land, “kill or go hungry,” is soon to be tested.

Mom and dad give Flag a second chance – and a third.

And then, finally, the moment of truth. The deer must be killed – and Pa asks Jody to do so.

“A man’s heart aches to see a young’un have to face the world,” says Pa, sadly.

Angry, in tears, Jody runs away. But, in good time, he comes home and embraces his father.

Along the way, Jody will see his friend die of his illness. Jody will hold his friend's hand after he passes.

Jody learns there is a time be born, and a time to die.

The tale is told with a clear eye to learning about death. Chances are, in due time, he will face this lesson with his parents.

And Jody will be ready.

Family films that are willing to present stories of death and dying compassionately, but clearly, to children are vital for growing up.

“Where the Red Fern Grows” is another film, about hunting dogs, that does not flinch. Nor does “Old Yeller.” Walt Disney himself gave children “Bambi” in which Bambi’s mother is killed by a hunter.

And C.S. Lewis, of course, sacrificed Aslan to teach a deeper spiritual lesson.

Of course, such tales must walk a tightrope between learning about goodbye, and subjecting kids to traumatic images that can harm them. Great artists walk that road sensitively. They show restraint while imparting a message that will empower – not harm – the child.

“The Yearling” is one such tale that can help children grow stronger, even while crying.

It's an annual tradition for Bill Gates - Microsoft co-founder, co-chair of the Bill & Melinda Gates Foundation, and avid reader - to release a summer reading list in May. This year, much of his attention is on the coronavirus pandemic, but he's aware that many of us might be looking for distractions: The list includes not only his traditional five recommendations, but a bonus list as well. ...

WARSAW, Poland (AP) — A song took aim at an alleged abuse of power by Poland's ruling party leader, Jaroslaw Kaczynski. It rose to the top of the chart of a public radio station. Then it disappeared.

Utah mayor asked to resign over concert amid pandemic

KAYSVILLE, Utah (AP) — A Utah-based watchdog group has asked Kaysville Mayor Katie Witt to resign over her support of a concert planned for late May that could attract hundreds of people.

Claude Jarman Jr., Gregory Peck and Jane Wyman in a scene from “The Yearling.”