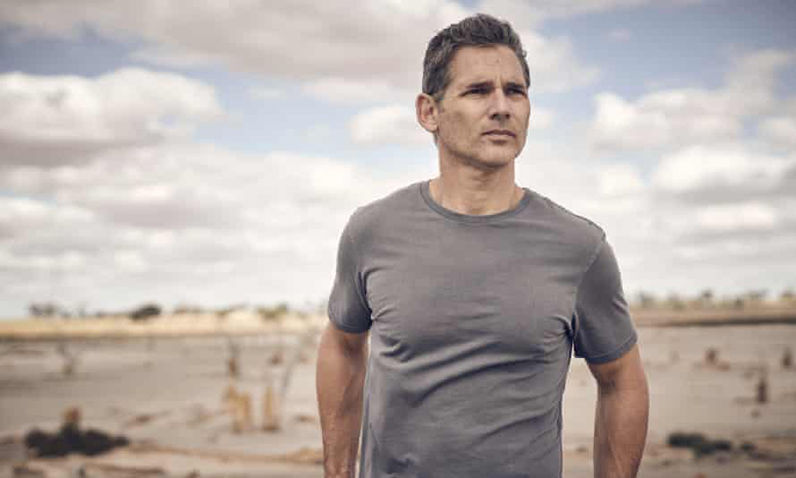 Give a brush to a talented artist, and a paint-by-the-numbers creation can still be wall-worthy.

So, it goes with some formula films, which rise above their scripts because the cast and crew milk the max from mundane material.

The Australian film “The Dry” finesses a familiar murder mystery so deftly, that we can forgive the unimaginative flaming ending.

As the title promises, geography and weather are integral to our story.

“The Dry” is set on parched land in southeastern Australia. The locals remember when waters flowed and kids played in the river.

No more. The drought has turned green valleys into deserts. It’s been a long time since these parts saw rain.

Amidst the heat wave, this once innocent town is confronting its dark side.

Federal agent Aaron Falk returns to his hometown to attend the family funeral of people he knew. Husband Luke killed his wife and child, before committing suicide, says the local police sergeant.

But Luke’s mom tells a different story – his son was a gentle soul, not a killer.

She asks Aaron to use his CSI skills to find the killer.

Aaron suspects there are more secrets buried in the three graves.

“Fly off and go back where you came from,” says one angry man, using slightly more colorful words. “This is just a revenge trip for you.”

Turns out that Aaron left town under a cloud after the drowning death of his girlfriend on a day when she went to meet Aaron by the river.

Aaron says he never met her there. Locals aren’t so sure.

Most people stonewall him, but some are honest.

“We’ve been lying so many times for so long, it’s become second nature,” confesses one.

The power of “The Dry” lies in Eric Bana’s layered portrayal of Aaron. He’s operating on three levels.

First, he’s still grieving the death of his teen girlfriend Ellie. We learn Aaron was a shy, handsome kid who was loved by the town before being devastated by Ellie’s death.

After Ellie’s death, Aaron and his friend Luke covered for each other, raising suspicions – and the town turned on him.

Now, years later, Aaron is a savvy investigator who is piecing together clues, and deflecting red herrings.

Finally, there is Aaron the lonely soul, still nursing wounds. During his investigation, he reunites with Gretchen, another childhood friend.

Bana’s performance is subtle, nuanced and affecting. The story keeps flashing back to the shy teen, reminding us we carry our young selves forward, under our grown-up façade.

That’s the part of the story that lingers. We all have childhood memories floating through our adult minds. The danger in going back to our home towns is that those who knew us yesterday can see through what we are today. We can’t bluff childhood friends.

One scene is particularly revealing. Gretchen is out in the flats shooting rabbits. She offers Aaron her rifle to take a shot. He trains the rabbit in the crosshairs, but can’t pull the trigger. He hands the gun back to her.

Even though he’s in police work, Aaron’s heart has not hardened. Gretchen sees that reluctance to kill in his eyes, a sensitivity he possessed even as a child.

“You know I’m going to have to shoot him anyway,” she says, firing and killing the rabbit.

That scene points to the conflict raging inside Aaron. He’s a law enforcement officer, an eagle-eyed marksman, who still sees life as sacred.

Aaron is one who will kill only reluctantly, his trigger finger still accountable to his childhood sensitivity and shyness.

Aaron is a good model for what an ideal crime fighter should be like: physically skilled on how to use deadly force, but spiritually reluctant to do so. Aaron embodies the dialectic of the gentle sheriff who wants to protect life, not take life – but whose hand is never far from his holster.

Because of Bana’s textured development of his character, we care about him. Yes, he will solve the crime in a melodramatic fiery finale, but that’s not what carries the story.

We are drawn into Aaron’s interior drama. As we leave, we wonder if Aaron will also sort out his inner turmoil and find peace.

We hope so, but we’re not sure. Neither is he.

Like the land around him, it’s been a long time since Aaron’s parched soul saw rain.

Billie Eilish: People don't know anything about me

Billie Eilish: People don't know anything about me

Demi Lovato reveals what led to their 2018 overdose

Demi Lovato reveals what led to their 2018 overdose

Elizabeth Olsen has secretly been married for months

Elizabeth Olsen has secretly been married for months

Dancin’ and rappin’ down the streets of New York

Ned Beatty, the indelible character actor whose first film role in 1972's "Deliverance" launched him on a long career, has died. He was 83.

We’ve had to say goodbye to some beloved musicians, athletes, actors and more. Here's a look at the stars we've lost so far in 2021, through May.

NEW YORK (AP) — Ned Beatty, the Oscar-nominated character actor who in half a century of American movies, including “Deliverance,” “Network” and “Superman,” was a booming, indelible presence in even the smallest parts, has died. He was 83.

After charming leaders, Queen Elizabeth sits back for parade

LONDON (AP) — Fresh from charming leaders at the Group of Seven summit, Queen Elizabeth II was back at her residence at Windsor Castle on Saturday to view a military parade to mark her official birthday.

Johnson admitted he isn't sure if he has "the patience" for the role, but he was flattered to discover that 46 percent of Americans would back him for the White House.

Frank Bonner of 'WKRP in Cincinnati' dies at 79

Frank Bonner, who played a brash salesman with an affection for polyester plaid suits on the TV comedy "WKRP in Cincinnati," has died. He was 79.

Frank Bonner, Herb on 'WKRP in Cincinnati,' dies at 79

LOS ANGELES (AP) — Frank Bonner, who played a brash salesman with an affection for polyester plaid suits on the TV comedy “WKRP in Cincinnati,” has died. He was 79.

Anthony Bourdain doc 'an act of therapy' for an acute loss

NEW YORK (AP) — When the filmmaker Morgan Neville began making a documentary on Anthony Bourdain, the late chef and globe-trotting television host, one of the first things he did was comb through every song Bourdain had ever referenced. He came up with a playlist 18½ hours long and called it “Tony.”

'Housebroken' brings out the animal in pet owners, stars say

If Clea DuVall had been able to take her cat to therapy, she may not have written “Housebroken,” a new animated series on Fox.