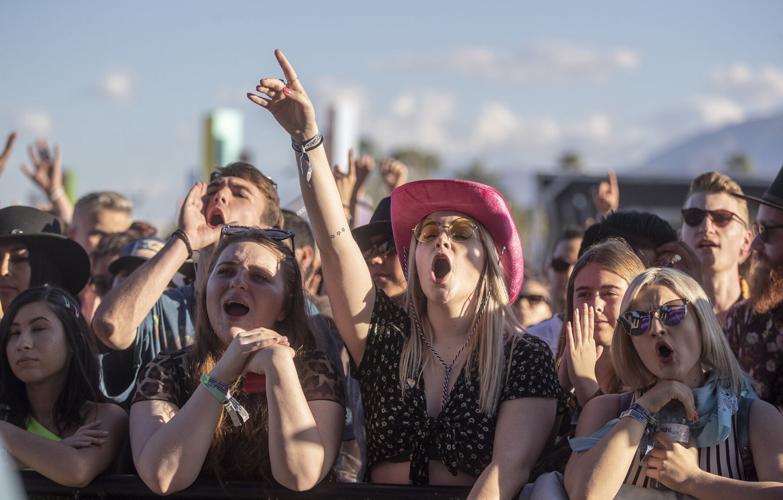 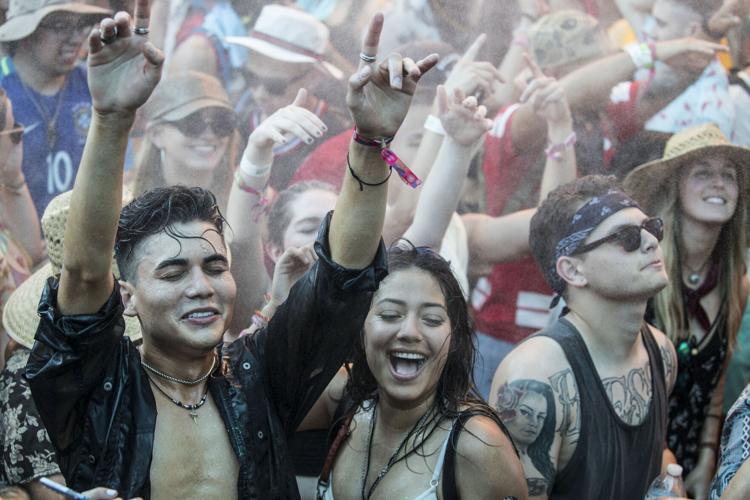 Festival goers are doused with water to keep cool at the Do Lab as the second weekend gets underway at the Coachella Music and Arts Festival in Indio, California, on Friday, April 21, 2017. (Brian van der Brug/Los Angeles Times/TNS)

ANAHEIM, Calif. — Justin Cohen has waited for the gates to the Coachella Valley Music and Arts Festival to reopen for a long time.

How long? The 32-year-old West Hollywood dog walker bought his ticket in June 2019 and has held onto it ever since.

“I remember when it got postponed in March 2020,” Cohen says. “I said right then, ‘When we can go back to Coachella, it’ll be almost like an invisible finish line for us.’”

Michael Recon bought his VIP wristband for the 2022 festival in June 2021, operating under the belief that by April 2022 the world would be safe enough to gather with 125,000 fans at the desert fest.

But by December, Recon, a senior accounting assistant for Riverside County who moonlights as a dance and choreography instructor, wasn’t so sure.

“I actually thought that things would be a lot better,” the 38-year-old Moreno Valley resident says. “A lot of things are opening up and everything, but I’m still cautious.

“I don’t think we’re at like herd immunity yet, and I think that’s a big deal,” Recon says. “I mean, we’re still out in the open – but you never know.”

Recon decided to sell his wristband and sit out this Coachella in the end.

The festival opens Friday, and for the next three weekends – two for the Coachella lineup, and a third for the Stagecoach Festival – tens of thousands of fans will congregate in front of the stages and inside the tents on the grounds of the Empire Polo Club.

The festivals will be packed and festivalgoers, performers, artists and vendors are thrilled to be back. But no one can guarantee that COVID-19 won’t be present in the Coachella crowds this month, as festival organizers Goldenvoice made explicitly clear on the festival’s website.

“There is an inherent and elevated risk of exposure to COVID-19 in any public place or place where people are present,” a bolded statement on coachella.com reads. “And there is no guarantee, express or implied, that those attending the festival will not be exposed to COVID-19.”

In other words, you’ve been warned.

When the 2022 Coachella lineup was announced in January with headliners including Harry Styles and Billie Eilish, the festival still required attendees to wear masks and provide proof of vaccination based on state rules for large events.

A month later, in response to a sharp decline in COVID-19 cases, the state eased its vaccine and mask rules, and the Coachella organizers dropped the requirement for both.

Riverside County Public Health Director Kim Saruwatari, in an interview Tuesday, said that while there’s concern any time a large group of people gathers, the risk of Coachella and Stagecoach becoming superspreader events “is a lot less than it was six or seven months ago.”

The county’s positivity and case rates are low, but the wild card is what those rates are in the areas where festivalgoers are coming from, Saruwatari said, adding that she has “some comfort” in the partnership between her department and Goldenvoice.

Goldenvoice “has been in regular communication with our team that is running our COVID response,” Saruwatari said. The promoter “want(s) to make a safe environment” at the festivals, she said.

A private contractor will offer tests at the polo grounds, while a Riverside County testing bus will roam in the vicinity of the festival for three weeks and hours at testing sites near the polo grounds will be expanded, Saruwatari said, noting that people can visit myturn.ca.gov or www.rivcoph.org/coronavirus for information on where to get tested and vaccinated.

The Coachella website includes more specifics on the availability of rapid 15-minute antigen tests at the Indian Wells Tennis Garden and in the Camping Hub on the festival grounds.

The county has set up a “pathway” for those suspected of having or testing positive for COVID-19 at the festivals to be evaluated to see if they should be treated with therapeutics, Saruwatari said.

She urged festivalgoers to get vaccinated beforehand. Those at the festivals should wear masks — N95 masks offer the best protection, but “anything is better than nothing,” Saruwatari said.

While social distancing is a tall task amid hundreds of thousands of people, it’s encouraged, Saruwatari said. Festivalgoers should also stick to the same group of people so they can be informed quicker if someone in their group gets infected, she said.

Festivalgoers also might want to test once they’ve returned from Indio, especially if they have family members at high risk of severe illness or death from COVID-19, Saruwatari said.

Among the festivalgoers who spoke for this article, few expressed concerns about returning to Coachella in the age of COVID-19.

In fact, for James Mattone, a 25-year-old writer for Activision from Santa Monica, the pandemic in a way prompted his decision to make Coachella his first-ever music festival experience.

“I think with COVID it really kind of broadened my perspective a little bit,” Mattone says. The pandemic, he says, made him think he shouldn’t put off dreams in a world where the unpredictability of something like a heretofore unknown virus can turn things upside down in an instant.

“I wouldn’t say that we might not have many Coachellas left,” he says. “But when I look at the future, I want to a family, I want kids, I want to see the world and do all this stuff. There really wasn’t a better time to plop down whatever it was to buy a wristband.”

Angel Chavez, a 29-year-old construction manager who also owns a video production company, has attended Coachella every year since 2009.

“For me, I’m 100% comfortable,” the Coachella Valley native says of returning to the festival. “I was already wearing a bandana, something over my face. I never really got sick when I started wearing that, and years before, I would get what they called the Coachella flu.”

Chavez, who makes videos about Coachella for his YouTube channel, says he’s well aware of the risks.

“Everybody knows the risk,” he says. “If you’re going to a festival that has 125,000 people, you know the risk at this point in the pandemic.”

To him, the benefits outweigh the rest.

“Once you experience the festival you want to keep going,” Chavez says.

Like Mattone and Chavez, Cohen says he’s fully vaccinated, and also had COVID in December.

He says he, his fiancee and a few friends are so excited to be back at Coachella that they may stay for the second weekend, too.

“As ridiculous as this may sound, there is nothing that I have looked forward to more, since the pandemic started, than getting back to Coachella,” Cohen says.

As for Recon, he’s comfortable with his decision to sell his wristband and stay home to watch the festival on its livestream.

“I love being in the pit, close to the performers,” he says. “But I think I can wait another year to see live music.”

Kathy Hilton has declared her daughter Paris Hilton is going to be an "amazing" mother. Plus, Amy Robach and T.J Holmes are reportedly set to leave GMA 3, and more recent celeb news.

"The passing of our kind, hilarious mother, Cindy Williams, has brought us insurmountable sadness that could never truly be expressed," a statement by her children said.

Actor Annie Wersching, best known for playing FBI agent Renee Walker in the series "24" and providing the voice for Tess in the video game "The Last of Us," has died. She was 45.

A Santa Fe district attorney has formally filed involuntary manslaughter charges against actor Alec Baldwin in the fatal shooting of a cinematographer on the set of the Western movie “Rust.”

The decision follows federal convictions in two different courts that ensure the disgraced R&B star will be locked up for decades.

Lisa Loring, best known as the first actress to play Wednesday Addams in the original "The Addams Family" sitcom, has died at the age of 64.

Ozzy Osbourne cancels all shows, says his touring career is over

The heavy metal legend has suffered a series of health setbacks in recent years.

Gina Rodriguez digs into obituaries in new comedy, 'Not Dead Yet'

When David Windsor and Casey Johnson were looking for story ideas, they discovered they both loved reading obituaries.

A Chicago prosecutor is dropping sex-abuse charges against singer R. Kelly. The decision follows federal convictions in two different courts that ensure the disgraced R&B star will be locked up for decades. Cook County State’s Attorney Kim Foxx made the announcement Monday, a day ahead of a court hearing. Kelly was indicted in 2019 on multiple crimes and accused of sexually abusing four women in Illinois, including three who were minors. Since then, federal juries in Chicago and New York have convicted him of a raft of crimes, including child pornography, enticement, racketeering and sex trafficking. Kelly is already serving a 30-year prison sentence.

Beyoncé might break the all-time Grammy wins record this year

It's OK To Be Skeptical About Tom Brady's Retirement

It's OK To Be Skeptical About Tom Brady's Retirement

Festival goers are doused with water to keep cool at the Do Lab as the second weekend gets underway at the Coachella Music and Arts Festival in Indio, California, on Friday, April 21, 2017. (Brian van der Brug/Los Angeles Times/TNS)