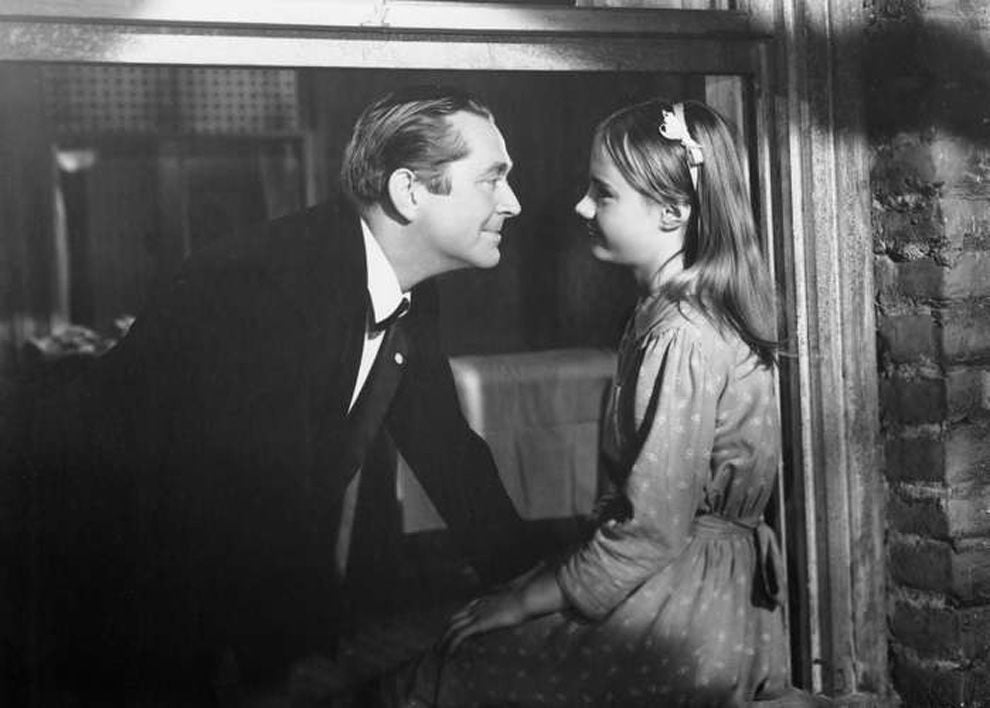 James Dunn and Peggy Ann Garner in "A Tree Grows in Brooklyn."

A Tree Grows in Brooklyn

The indomitable Francie Dolan, 11 going on 21, walks up to the librarian and presents her with a book called “The Anatomy of Melancholy.”

“Are you sure you want to read this?” asks the librarian, eyebrow raised.

“Yes, I want to know everything in the world,” says Francie.

Francie would seem to have no right to dream. Her mom can barely keep food on the table, and her dad, who affectionately calls her Prima Donna, is a dreamer who drinks too much and seldom works. He sings at bars, when he’s not drinking at bars.

But Francie stares at the best school in the region and says, “Oh, I want to go there.”

During the day Francie sits on the fire escape outside the window and reads books. At night she writes stories, encouraged by her English teacher who tells her to “write about what you know, and then edit with your imagination.” She’s a “little woman” Louisa May Alcott would have loved.

Mom has lost faith in her alcoholic husband, who is more burden than beau. But Francie loves him, despite his tragic life. And dad dearly loves Francie. He encourages her to reach for the stars.

One day dad and daughter are looking out the window of their apartment. The big tree that grows in front of their Brooklyn flat is being cut down. Francie is distraught. It’s the tree she loved, where birds sang.

“They’ve killed it!” she says melodramatically. “They have no right to do that.”

“Don’t worry Prima Donna,” says her pop. “That tree pushed that cement right out of the way and grew up. And it will grow back again.”

Francie is, of course, the tree that grew up in Brooklyn.

Francie will indeed push through the cement and triumph against all odds, ending up at the University of Michigan at the end of the book.

Elia Kazan’s 1945 “A Tree Grew Up in Brooklyn,” adapting Betty Smith’s 1943 novel, won’t be an easy watch for today’s kids. It’s in black and white, it’s sentimental and corny at times – and reflects the 1940s culture. I still think they’ll like it, girls especially.

Kazan directed films that won nine acting Oscars over 31 years. Kazan won Best Director twice, for “On the Waterfront” and “Gentleman’s Agreement.” Kazan’s legacy is tainted by his testimony before the House Un-American Activities committee in 1952.

Francie, as portrayed by 14-year-old Peggy Ann Garner, is a powerful role model for young ladies. Garner won an honorary Oscar recognizing her work as an exceptional juvenile actress. James Dunn, who played the father, won the Best Actor Oscar.

We live in the age of girl power, including stories about Wonder Woman and Katniss Everdeen, but stories of young girls who set out to conquer the world have been around a long time. Both “National Velvet” and “A Tree Grows in Brooklyn” saluted the power of little girls to chase big dreams. Both actresses, Elizabeth Taylor and Peggy Ann Garner, won Oscars for their portrayals of these little ladies dreaming big.

The central tragedy in “Tree” is the alcoholic father and the tension in the family from his addiction. Katie, the struggling mom and wife, is trying to honor her marriage vows of “death ’til us part,” but she’s sliding toward depression and anger because she is the sole income and sole contributor to the family. Her relationship with daughter Francie is fracturing as Francie slides toward Dad in the crisis.

That crisis deepens when Dad dies, and Francie blames her mom for not supporting her dad more.

How long should a wife stay with a non-contributing husband? What’s best for Francie?

And, at the heart, how does Francie manage to keep her spirit alive through all this? She is, indeed, a tree growing through cement. She’s the strongest one in the family, by far.

Let’s say goodbye by suggesting that the kids in our lives read Betty Smith’s book. It was outrageously popular, and features some lovely writing about a precocious girl we can’t help but love. Here’s a passage that opens the tale to entice your young friends to curl up on their fire escape and read, read, read.

Francie is admiring the tree that grows outside her Brooklyn window.

“…That’s where the tree of Heaven flourished. That’s the kind of tree it was. It loved poor people.

Its umbrellas curled over, around and under her third-floor fire-escape. An eleven-year-old girl sitting on this fire-escape could imagine that she was living in a tree. That's what Francie imagined every Saturday afternoon in summer.”

Sam and Suzy, two savvy but quirky 12-year-olds, are plotting to run away from home and get married.

Film Review: Once Upon a Time in the West

Sergio Leone is the Italian master chef who served up Spaghetti Westerns.

James Dunn and Peggy Ann Garner in "A Tree Grows in Brooklyn."