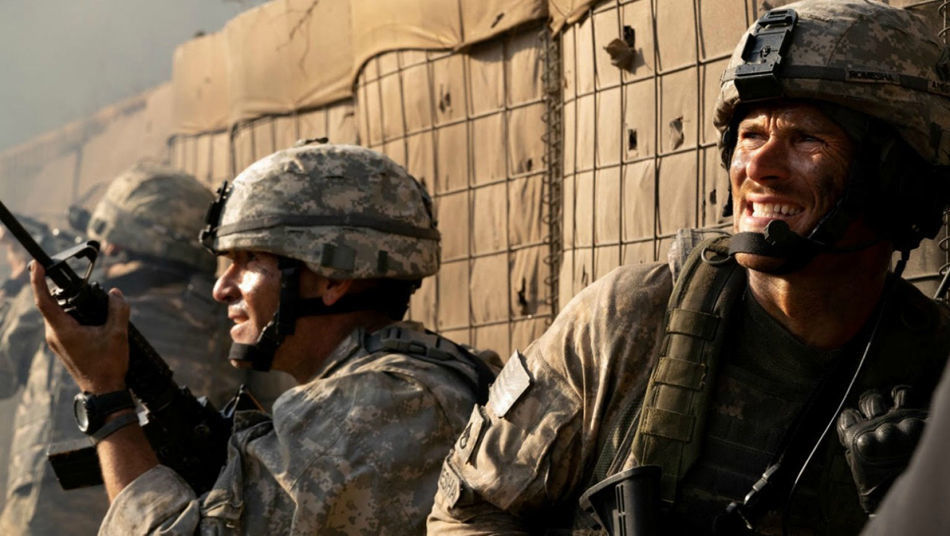 A scene from the movies "Outpost" playing at The Myrna Loy.

One by one the American soldiers take their turn calling home on the phone on their base in Afghanistan in October 2009.

The men do their best to convince loved ones they are safe and looking forward to coming home. “It’s all good,” is their go-to slogan.

No soldier dares to confess the true dangers. Savvy partners undoubtedly can read through the compassionate spin, but would probably prefer not to press for details.

The truth is that Bravo Troop 3rd Squadron, 61st Cavalry Regiment of the 4th Infantry Division has been assigned an impossible task. Outpost Keating sits at the lowest point of a valley, surrounded by three mountains in Nuristan province where the Taliban are well camouflaged.

Soldiers know to take control of the high ground. But they are assigned to the lowest point in a deadly amphitheater.

Every day gunfire strafes the base. Bullets bounce off helmets. Bombs explode. Patrols are perilous. We watch two men cross a shaky rope bridge, only to be shot half way across. I flinched.

Within a short time, I was tense and worried for all my new brothers. It seemed clear many would die trying to defend this suicidal fishbowl. But what followed was even more brutal than I expected, and I was shaken as I left the theater.

I have seldom seen a war movie that brought battle home so realistically and intimately – and I’ve seen dozens. The opening scene on Omaha Beach in “Saving Private Ryan” is another of the same power. Director Rod Lurie’s “Outpost” is claustrophobic and unrelenting.

“The Outpost” spares no detail to be realistic. It’s based on a journalist Jake Tapper’s detailed 673-page account of the battle of Kamdesh.

The cast includes four surviving members of Bravo Troop, acting alongside Hollywood stars such as Orlando Bloom and Scott Eastwood. Most war movies fabricate some melodramatic moments to embellish the story. No need for that here.

The film ends by listing honors bestowed on one of the most decorated units in the war. The soldiers were awarded two medals of honor, one distinguished service cross and eight silver stars – and a place in military history.

The daily firefights build towards a final assault. An Afghan translator warns them “a big attack is coming,” but they’ve heard that before – and they don’t have enough ammunition to outlast the swarms of Taliban.

“We may die today,” says one soldier to another. It seems truly hopeless.

As the Taliban break through the last line of defense, one American is gunned down, and is lying on an open dirt patch. To rescue him would be suicidal, with Taliban guns trained on that spot. But two soldiers will “never leave a fallen colleague.”

They hesitate, then nod. “I’ll cover you,” says one, as the other rushes to the body. He throws his friend over his shoulder and staggers toward the medical tent. “Coming in.”

I’ve seen battlefield rescues hundreds of time, many in “Alamo” films, but I never flinched or shook as much. I was caught up in this battle which never seemed like “just a movie.” Some of these “actors” actually nearly died in this battle and came back to share the story and honor their lost friends.

They are not performing a scene – they are reliving hell.

That rescue is only one of countless small moments of heroism by a band of brothers.

They would all have perished in this 13-hour assault, but for last-second air support. By all odds, the men should not have survived as long as they did with 400 Taliban swarming 50 soldiers.

I’m a Quaker, spiritually opposed to war. But I have never doubted the courage of those who fight those wars or their sacrifices. I’ll bow my head now and again next Memorial Day for these fallen soldiers.

These soldiers did their duty and died with honor, but they should never have been sent on this mission.

The battle reminded me of the battle of Gallipoli in 1915, in which troops are ordered to run bravely into machine gun fire to certain death, mowed down the moment they emerged from the trenches. The officer sees the toll, but orders the next wave to slaughter.

The consummate sadness of such films as “Gallipoli” and “Outpost” is that truly good men will die pointless deaths. Dying for a good cause is one thing. A wasted life is quite another.

Their grieving loved ones will think back to those phone calls as last words: “It’s all good.”

'Dirty Dancing' is getting a sequel

Jennifer Grey is reportedly set to star in the sequel as well as executive produce it.

LOS ANGELES (AP) — FBI agents including a SWAT team served a search warrant at the home of YouTube star Jake Paul on Wednesday.

'I kind of missed it': Chip, Joanna Gaines bringing 'Fixer Upper' back in 2021

We’ve had to say goodbye to some beloved musicians, athletes, actors and more. Here's a look at the stars we've lost so far in 2020, through July.

NEW YORK (AP) — The distrust many Americans feel toward the news media, caught up like much of the nation's problems in the partisan divide, only seems to be getting worse.

How an arrest upended filming of 'Surviving Jeffrey Epstein'

NEW YORK (AP) — The filmmakers behind “Surviving Jeffrey Epstein” moved quickly when Ghislaine Maxwell was arrested on federal charges that she acted as a recruiter for the financier’s sexual abuse.

TEL AVIV, Israel (AP) — It began as a lighthearted conversation between two Jewish comedians, riffing on a podcast about the idiosyncrasies of their shared heritage. But after talk turned to Israel, it didn't take long for Marc Maron and Seth Rogen to spark an uproar.

'Who's the Boss?' gets reboot with Tony Danza, Alyssa Milano

A scene from the movies "Outpost" playing at The Myrna Loy.