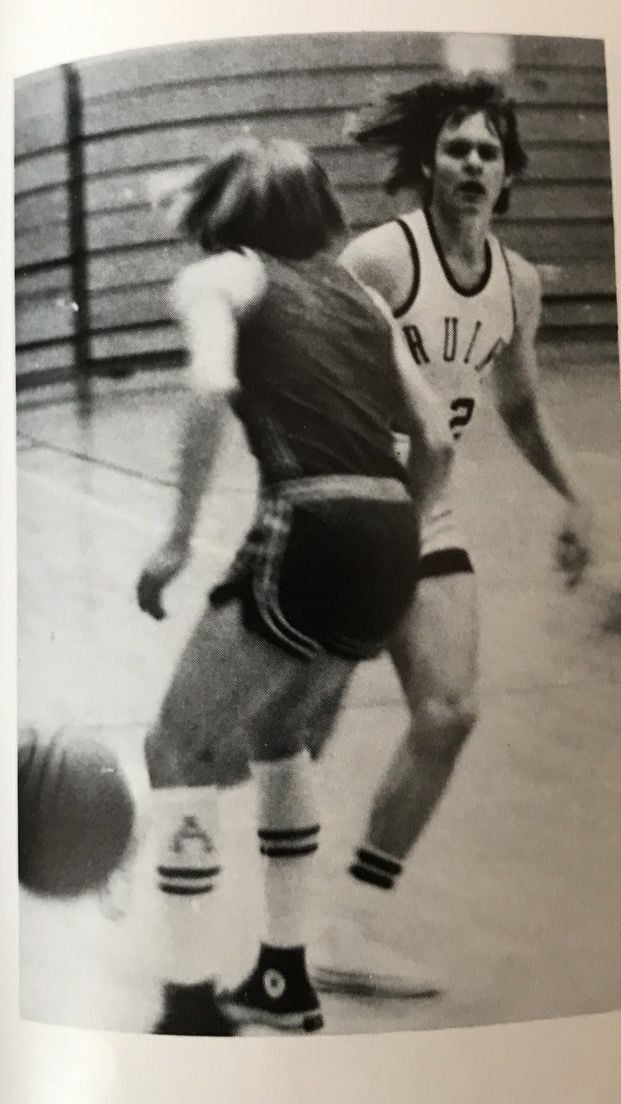 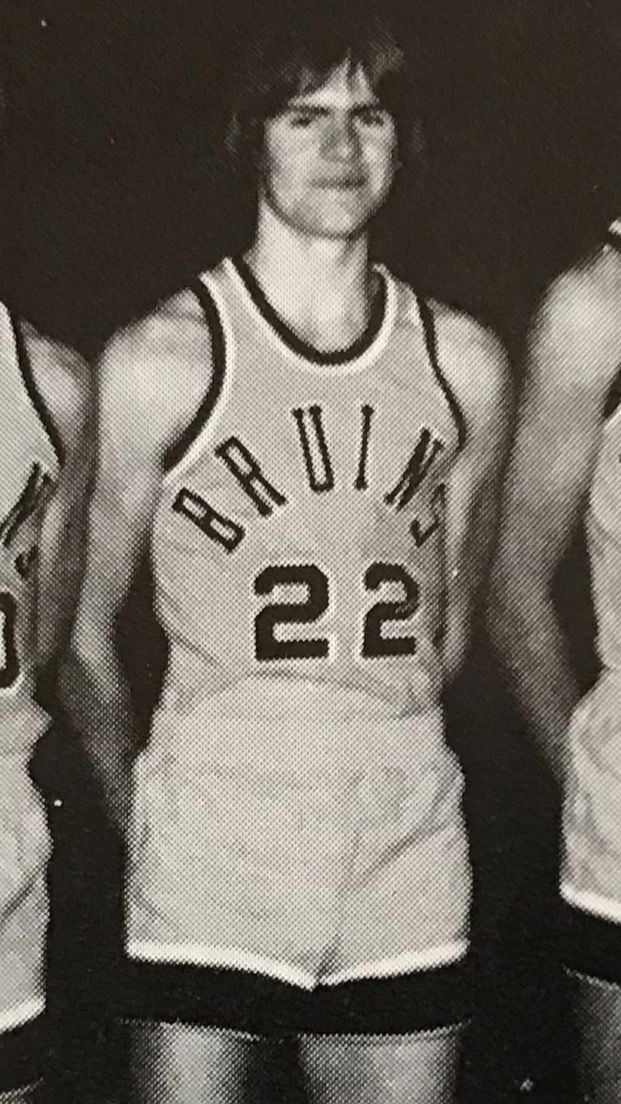 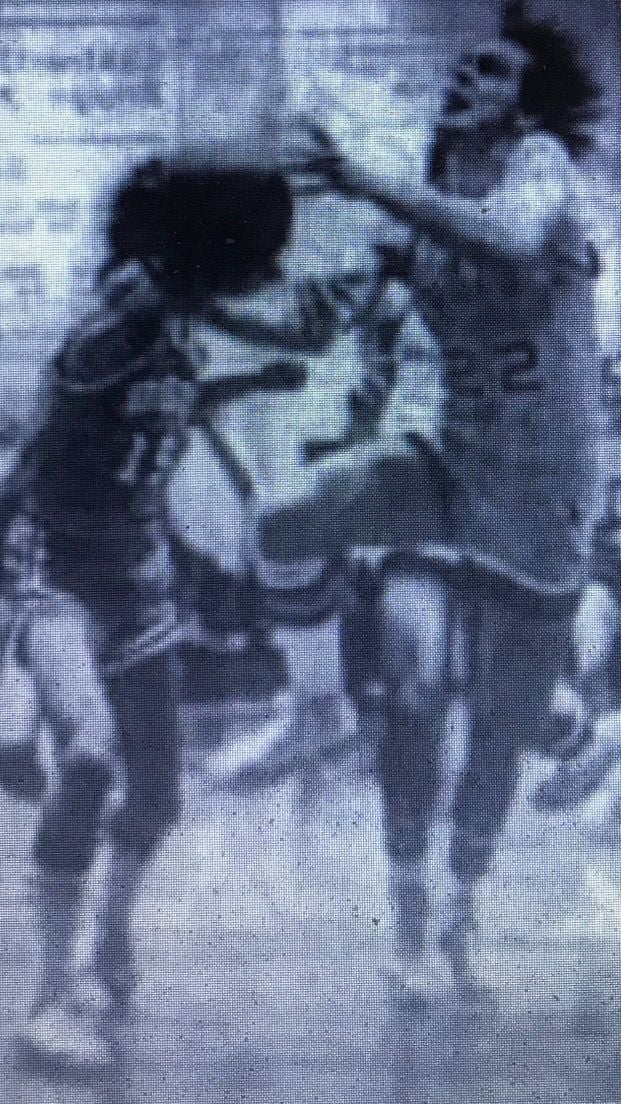 Mike Manion is fouled while driving for a lay-up against Great Falls High. Photo by Independent Record

In the third year of the school's existence, Bruin coach Lon Carter's starting five hoopsters for much of the season were seniors Manion, who led the team in scoring the year before, Kevin Donovan, Mark Kasperick and Mike Crennen; and junior Mark Whitney.

CHS opened its campaign by capturing the 1975 Butte Central Round Table Tournament championship, beating Butte High 73-71 and Butte Central 70-69 in the chipper. Manion, a 5-foot-11 guard, scored 29 (23 in the second half) and 31 points (most from downtown, before there was a 3-point line), respectively.

Against the Bulldogs, Kasperick netted the deciding basket from 15-feet with 24 seconds left, followed by Crennen's blocked shot at the other end of the court. In the finals, Manion swished the winning free throw with 2 seconds left against the Maroons for the title.

The season's first crosstown meeting was a frenzied back-and-forth tilt in the Carroll PE Center, with the score tied 11 times and 18 lead-changes, before the Bruins pulled away from Helena in the final frame for a 75-62 triumph.

The Bengals had their last lead at 53-51 early in the fourth, before Manion – draining 12 points, including four straight long jumpers – sparked a CHS streak of 15 unanswered points.

Manion led all scorers with 29 markers, while teammates Jeff McDowell (who came off the bench) netted 12, and Crennen added 11. Barry Hanson, a 5-8 guard, and Dave Burt spearheaded the Bengals at 20 and 19 points.

In the rebound department, Capital's Whitney and Crennen pulled down 12 and 11 boards, while Steve Wilkins paced the red-and-white under the glass with 11.

In the rematch in HHS' gym, Capital got the intra-city sweep, taking a 3-point lead in the first quarter and holding on by that same margin for the 80-77 final score.

Both squads put four cagers in double figures. Manion and Whitney led the Bruins with 25 and 24 points, followed by Donovan at 13, and 11 counters by Crennen. Whitney and Crennen speared 16 boards apiece.

There were 74 free throws in the rough and tumble contest, with Helena hitting 27 for 38, compared to 22 of 35 for the Bruins.

It was the winless Bengals 29th consecutive loss, dating back to the 1974-75 season.

Capital entered the Eastern AA Division Tournament in the PE Center as the No. 3 seed, with a 9-11 record. In their opener, they were edged by Billings West 62-61, despite holding a 10-point lead early in the fourth quarter. Then in loser-out action versus Billings Senior on Saturday morning, the Bruins faced elimination trailing 53-48 with 2:55 left on the clock.

But it was the brown-and-gold's turn for a comeback, tallying the game's final seven points for a 55-53 victory. Scoring by Manion and Donovan brought CHS to even at 55-all, and then with four seconds left, reserve Bill Dolan canned a 15-foot jumper from the side, vaulting the team to their first State tourney qualification.

Next, Capital avenged the loss to West in the consolation finals 59-52 – twice overcoming 7-point deficits – for the program's first divisional trophy.

Manion led the tourney in scoring, averaging 22.7 points, and was selected first team All Tournament. Whitney was tabbed honorable mention, with an 11.3-point average.

Manion was selected first team all-state, and left the school with at least 13 school records, including season scoring average of 21.7 points and 201 field goals made, and career free throw accuracy of 83.6%, all of which still stand to this day.

Whitney, a 6-3 post player who led the team under the boards with a 10.5 rebound average and was their third-leading scorer (10.4 ppg) was named second team all-conference.

Manion, who once made over 100 consecutive free throws during his lunchtime practices in the CHS gym, garnered a “distinguished mention” on the 1976 St. Petersburg (Florida) Times High School All-American basketball team.

He received a scholarship with the Carroll Saints, but his back surgery eventually sidelined his college career. However, after attaining his law degree from Notre Dame, Manion starred at adult hoops for Butte's Knights of Columbus, and was later inducted into the K.C. Hall of Fame.

Gianforte rescinds restrictions on hours, capacity at some businesses

Vehicle crashes into apartment in Helena

A vehicle crashed into an apartment building at the intersection of Euclid Avenue and Glendale Street around 1:15 p.m. Monday.

Montana’s only U.S. representative, Matt Rosendale, told his Twitter followers Monday that House Democrats were raising false claims of a national crisis to call on President Donald Trump’s Cabinet to remove him using the 25th Amendment.

Mike Manion is fouled while driving for a lay-up against Great Falls High. Photo by Independent Record