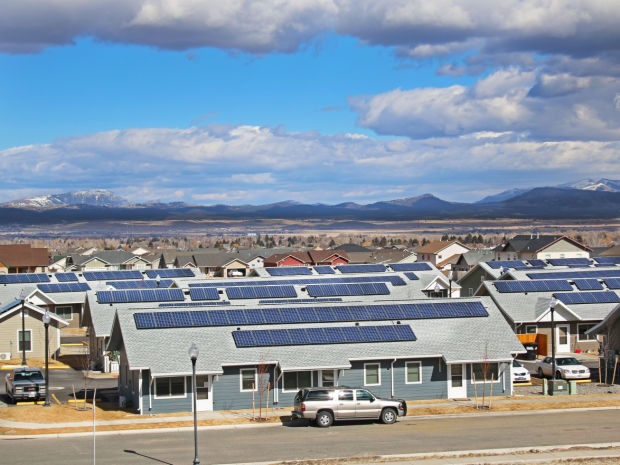 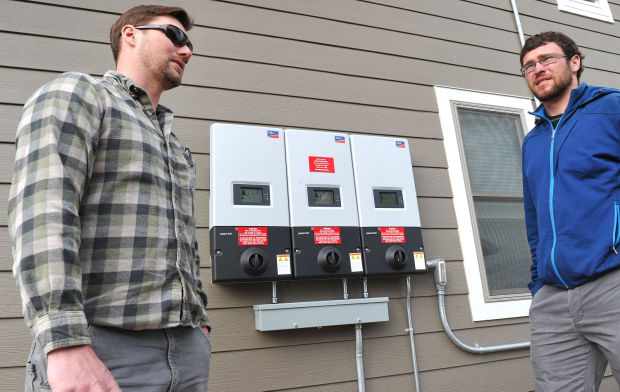 Eliza Wiley Independent Record - From left Solar Montana owner, Jack Isbell, and solar PV integrator with Solar Montana, Sky Ordoff, talk about the project where they installed 338 solar panels creating an 84.5 kW system, which is second only in size to a system installed on a parking garage in Missoula.

Atop the dozen buildings that make up the River Rock Residences for low-income seniors sits one of the largest solar arrays in the state.

The 338 panels, which came online in January, may cut utility bills in half for the tenants of nonprofit Rocky Mountain Development Council’s newest housing project.

RMDC elected to add the solar power system using spare funds from its project budget. Solar Montana owner Jack Isbell, who installed the panels, believes it’s the second largest array in Montana, just behind one on a Missoula parking garage.

Those rankings may not remain for long, though, as plummeting costs have led to rapid adoption of solar energy around the country, including Montana, he said.

He and Solar PV Integrator Sky Orndoff cite a recent report stating that more solar electricity has been installed nationally in the past 18 months than the prior 30 years combined.

The most recent data from the Solar Energy Industries Association shows that installations jumped 76 percent in 2012. Solar now makes up around 1 percent of all energy produced in the U.S., according to an article published in February by news service Stateline.

The majority of solar is concentrated in California, Arizona, New Jersey and New Mexico, the report states. But that has more to do with public policy and utility rates than available sunlight, Isbell notes.

Montana receives plenty of solar radiation for solar, he said, as much as parts of Texas and Florida. He notes that Germany — a country that receives less sunlight than Montana — boasts the most solar arrays in the world.

That solar is only viable in hot desert areas is “a pretty bad misconception,” Orndoff said.

Solar is no longer the heavy investment with low payback that it once was, according to Isbell. Previously limited to off-the-grid applications, the technology has become mainstream.

Manufacturing costs have dropped accordingly — around 60 percent in the last few years.

“The return on investment gets bigger every year,” Isbell said.

Now, Isbell says that return tops 10 percent, with the panels paying for themselves in a decade or less. Residents who install solar can also claim a

“It will actually make you money over time at a pretty darn good rate,” Orndoff said.

In the past year, Isbell says the cost of solar has dropped so much that customers no longer need to depend upon subsidies to install the panels.

“We’re able to sell these without grants anymore,” he said.

The Helena company has also installed systems at Helena High School and the Eastgate fire station. The River Rock array is 18 times as large as the one at HHS, and consists of 34 individual 2.5 kilowatt systems on 12 buildings.

Each can produce around 300 kilowatt hours of energy per month — just over one-third of the average consumption for Montana homes in 2012, according to the U.S. Energy Information Administration.

At the River Rock apartments, though, Isbell figures the panels may supply half of the tenants’ power.

The savings are realized through a system that requires utility companies to pay solar users for the energy they produce. It’s known as net metering, and in Montana users can roll over their credit towards future utility bills with 12-month periods.

Isbell said net metering is the principal policy that allows businesses like his to exist. The policies have also concerned utility companies around the country, which argue the credit structure means solar users aren’t paying their share of fixed costs to maintain energy grids, according to the Stateline report.

The River Rock panels have produced around

Roberts said RMDC is glad the panels will save money for its tenants.

“With them having to pay their utilities here, we just figured we’d give them a break,” she said.

Rent at River Rock is around $400 per month, though Roberts notes that some residents live on Social Security alone.

“They like the idea of solar,” she added. “They can’t quite wrap their head around it.”

Anyone can view the real-time power generated by River Rock solar array at www.solarmontana.solarlog-web.net.

Get your head in the Christmas shopping game early

Get your head in the Christmas shopping game early

Get the latest local business news delivered FREE to your inbox weekly.

Eliza Wiley Independent Record - From left Solar Montana owner, Jack Isbell, and solar PV integrator with Solar Montana, Sky Ordoff, talk about the project where they installed 338 solar panels creating an 84.5 kW system, which is second only in size to a system installed on a parking garage in Missoula.