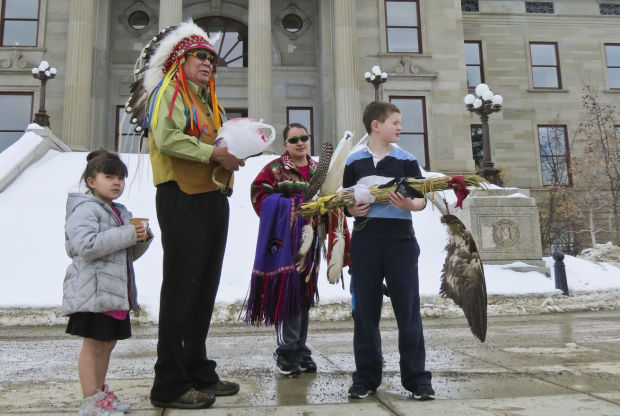 James St. Goddard, spiritual leader of the Blackfeet Confederacy, speaks out against the hunting of pregnant bison by other tribes. 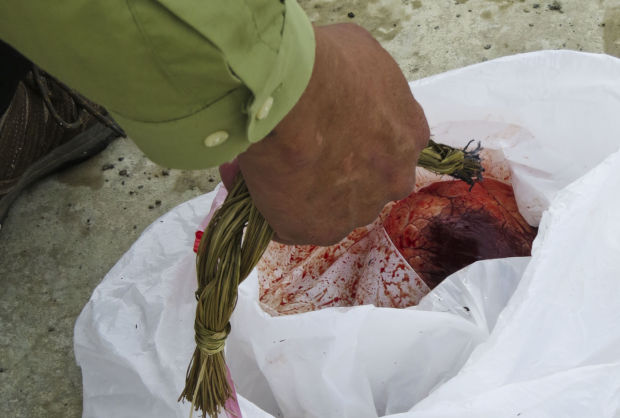 As a part of traditional ceremony, James St. Goddard burns sweatgrass over a bison heart.

Toting the bloody heart of a bison wrapped in a plastic bag, a Blackfoot tribal member came to the governor’s office Tuesday to speak out against the killing of pregnant female bison by the Nez Perce Tribe from Idaho.

Adorned with a full headdress and carrying a white eagle medicine staff, police stopped James St. Goddard in the hallway outside of Gov. Bullock’s office, who was not there at the time. St. Goddard was told he could not enter the office with the heart, and later performed a Blackfoot ceremony with burning sweet grass and the heart on the Capitol steps. He was allowed to bring the heart into the Governor’s Office of Indian Affairs, and met with director Jason Smith.

Saying he spoke with the authority of the Blackfoot Confederacy, he had confronted Nez Perce hunt-ers near Gardiner over their shooting of bison with fully developed fetuses. He claimed hunting bison this time of year violated his and other tribes’ reverence for the animals.

“We’re almost different religions in the tribes,” St. Goddard said. “But it’s a standard thing with the buffalo that you don’t do this at this time of year. So why are politics allowed to do this?”

St. Goddard said he believed the state, Yellowstone National Park and the tribes had insulted Native American culture by allowing the late hunting of female bison.

Three tribes have federally recognized aboriginal hunting rights for bison outside of Yellowstone Na-tional Park: the Salish Kootenai, Umatilla and Nez Perce. The Blackfoot Confederacy does not have special rights to hunt bison.

The tribes, not the state of Montana, set hunting seasons and limits for tribal members. The state ended its bison season Feb. 15, but tribal seasons have continued past that time. The Nez Perce has the latest season for pregnant female bison, FWP Warden Capt. Sam Sheppard said.

“We have a good working relationship with their enforcement people,” Sheppard said. “We’ll check tribal IDs and permits but the tribes set their own hunt.”

St. Goddard also took exception to the Nez Perce leaving bison hearts on the ground rather than plac-ing it in a tree, as is his tribe’s custom. He planned to take the heart he brought to the Capitol to a high point where an eagle could find it, he said.

“I think the governor could stop this,” St. Goddard said. “It’s like we went back 150 years ago. It’s de-stroying our culture right before our eyes.”

Nez Perce Fish and Wildlife Commission member Quincy Ellenwood said he could not speak for the tribe, and directed calls to the tribal chairman, who could not be reached for comment.

Calling the demonstration disturbing, the tribal chairman of the Nez Perce responded to a protest at the Montana state Capitol Tuesday that ac…

James St. Goddard, spiritual leader of the Blackfeet Confederacy, speaks out against the hunting of pregnant bison by other tribes.

As a part of traditional ceremony, James St. Goddard burns sweatgrass over a bison heart.